Remember to Breathe (Book One of the True Desires Series) 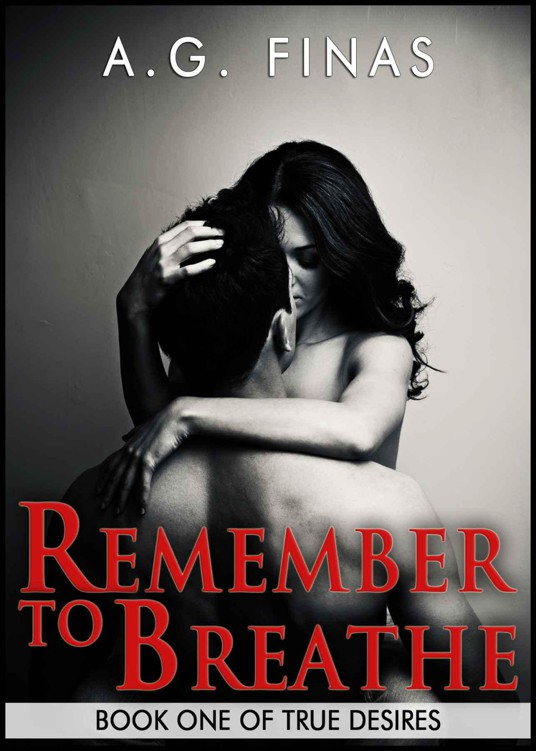 also by a.g. finas: entangled -excerpts from books one and two of the TRUE DESIRES series-

This is a work of fiction. The characters, incidents and locations portrayed in this book and the names herein are fictitious.  Any similarity to or identification

with the locations, names, characters or history of any person, product or entity is entirely coincidental and unintentional.

All rights reserved. No part of this publication may be reproduced or transmitted in any form or by any means, electronic or mechanical, including photocopy, recording, or any information storage or retrieval system, without permission in writing from the publisher.

No responsibility or liability is assumed by the Publisher for any injury, damage or  financial loss sustained to persons or property from the use of this information, personal or otherwise, either directly or indirectly.  While every effort has been made to ensure reliability and accuracy of the information within, all liability, negligence or otherwise, from any use, misuse or abuse of the operation of any methods, strategies, instructions or ideas contained in the material herein, is the sole responsibility of the reader.

Any copyrights not held by publisher are owned by their respective authors.

All information is generalized, presented for informational purposes only and presented "as is" without warranty or guarantee of any kind.

All trademarks and brands referred to in this book are for illustrative purposes only, are the property of their respective owners and not affiliated with this publication in any way. Any trademarks are being used without permission, and the publication of the trademark is not authorized by, associated with or sponsored by the trademark owner.

For John, Joey and Chu

Allie bends down to set the pot of water on the portable electric burner.  She's been in the dorm for at least ten minutes but her cheeks are still flush winter's early bite.  She strips to her bra and panties, wraps a blanket around herself and scuttles to the warmth of the old radiator under the window. A train whistle howls somewhere across town while a white grocery bag  loops around the empty courtyard below like a plastic ghost before getting snagged in the bare branches of the courtyard's only tree.
It's just you and me this weekend,
she thinks.  Thanksgiving is tomorrow. Unlike Gina and most of the other girls on the tenth floor,  Allie isn't going home.

They had planned to meet at a coffee shop earlier in the day.  Gina didn't show up though and didn't answer when Allie called.   Allie's disappointment soon gave way to an unexpected sense of relief.

She pondered the source of this relief only for as long as it took to put on her coat and bus her coffee mug and saucer.  When she stepped from the coffee shop, an epiphany hit her as
though delivered directly into her brain by the bone-rattling wind.
We are drifting apart and I don't think I care.

Allie and Gina had been inseparable since the sixth grade but now they are roommates (at least officially) and whole weeks go by when they don't see one another. Gina has been gradually moving in with Drew, a man Gina had sat next to on the plane from Sacramento before the semester began.
Allie misses her but has gotten used to living alone.

Gina came by to pick up some warmer clothes  when the weather had started to turn.  Allie,  realizing that her art supplies were overrunning Gina's bed and desk, apologized and started to tidy up but Gina waved her off.

“No big deal,” Gina said.  It wasn't like she was using them anyway.  Life was good at her boyfriend's house-  plenty of great sex and lots of space. He had a king-sized bed with huge pillows and silky multimillion thread-count sheets.

Once it cools, she puts in the new batteries that she had quested after as soon as she had left the coffee shop. The campus bookstore was out of double A batteries, so she ventured  the extra mile to a convenience store. She had decided that the few other lonely girls with no place to go for the weekend  must have cleaned out the bookstore's supply.

Allie turns on the radio in case someone happens to be walking by the room. She isn't the loudest-or doesn't think she is- but then she has no idea what this purple thing with its little  rabbit ears on the side is going to do to her.

Allie laughs as she holds it to herself and toggles through the different settings, then finally settles into one that she feels comfortable with. She eases it further in and closes her eyes, focusing on the slow churning inside her and the electric tingles that play over her body. It hits everything-  her walls, g-spot, clit- and soon pulses of pure electric joy shoot through her nerves, curling her toes and rolling back her eyes.  Whatever the mechanism is that has kept her from crying out is now broken. How loud she is, she doesn't know, but she hopes the radio's volume is sufficient to mask whatever she lets out.

Good thing Gina hadn't tried this out. There's no way Drew could compete
, she thinks
.
And then she starts thinking about him.  She had met him only once, just hours after Gina had- in the airport's baggage claim area. His taut body  under his tight undershirt and the way his jeans were ripped in all the right places and the way he winked at Allie made her melt. She had wanted to straddle him right there on the carousel on a makeshift bed of luggage .  Allie wasn't sure if Gina had been purposely keeping Drew away from her or not but she figured the lack of contact was probably for the best.

The radio is turned down.

“Hello? Allie? Wake Up!”  It's him.
Drew.
She swears she locked the door- he shouldn't have been able to get in- unless he had Gina's key. She hears his fingers snap. Her face reddens. She knows he can tell she is awake and has been pleasuring herself. Probably can tell that she was thinking of him while she was doing it.

“Better check your pulse. Make sure you haven't overdosed on something,” he says.

Too embarrassed. Must continue pretending to sleep until he goes away.

And then she feels the tips of his cold fingers on her neck. Her heart is practically jumping out of her skin. “Hm. No pulse. Maybe you're one of those Sleeping Beauty cases hm? Let's see.”

She feels his hot and sweet breath on her cheek, and then his lips on hers.

What are you doing?

She can't kiss him- he belongs to Gina after all, and yet she can't bring herself to roll away. His lips linger on hers for what seems like an eternity. She wants him badly.

“It's okay,” he whispers. “I won't tell if you don't.” His voice vibrates through her. And then as if those were the magic words, their lips open to kiss.

Just a kiss. Nothing more
.
And then he'll leave.

But then he moves to her neck. She puts her arm around his head, trying to push him away but not hard enough. “No. We can't. You're...you're the boyfriend of... And I'm...oh-” Her words are short circuited by a dash of pleasure and pain as he bites her earlobe.

She strokes his hair and exhales.  Allie grabs his shirt and pulls it over his face. He helps and then is in bed with her, skin to skin, hard body to hard body, the old electricity of her self pleasuring giving way to something new and volatile and dangerous. He rubs little circles on the skin just under her nipples and looks into her eyes.

“How?” She asks, slightly annoyed with the teasing.

“Okay then.  Someone who shall remain nameless asked me to check on you because she was getting calls about the noise coming from your room. This person said that someone knocked but no one answered.”

“Kind of like how when I was on my way over here I was busy not thinking about fucking you from behind.”

Drew kisses her again and wipes his hand over her breasts, down her side and over her slit, then down her leg and back up her pussy to rest his palm on her mound, leaving a trail of tingles.

His breath is warm and steady on her neck which he dots with little kisses. He tickles and teases her pussy as her hips rise and twist. Just when she is about to demand more, he puts two fingers inside her. She can hear the sound of her juices as he curls his fingers back up toward him, pressing hard on her ridge, coaxing out a loud moan. He keeps at this as his mouth trails down from her neck, making a stop at her pink nipple. Allie gasps as he nips it with his teeth. He continues down to the bud of her clit, which he barely touches with his tongue at first, all the while continuing to work his fingers inside her.

The intimacy of this moment with her best friend's boyfriend has just pushed past her comfort level.

“Stop. Lets just get on with it,” Allie says.

In a flash, he unzips and flings off his pants. A condom wrapper flutters to the floor and then he enters her with his full length. After a few thrusts, he moves her to her side, props up her leg with his arm and slowly works her while cupping her throat as if threatening to choke her should she make one unwise move.

Beyond the Highland Mist by Karen Marie Moning
A Witch's Tale by Lowder, Maralee
A Place of Safety by Natasha Cooper
Nobody Said Amen by Tracy Sugarman
Carnival of Death by Carnival of Death (v5.0) (mobi)
Accidentally Hers (Sterling Canyon #1) by Jamie Beck
Lay It Down: Bastards MC Series Boxed Set by Carina Adams
Ransom River by Meg Gardiner
Sargasso of Space (Solar Queen Series) by Norton, Andre
Three Brothers by Peter Ackroyd