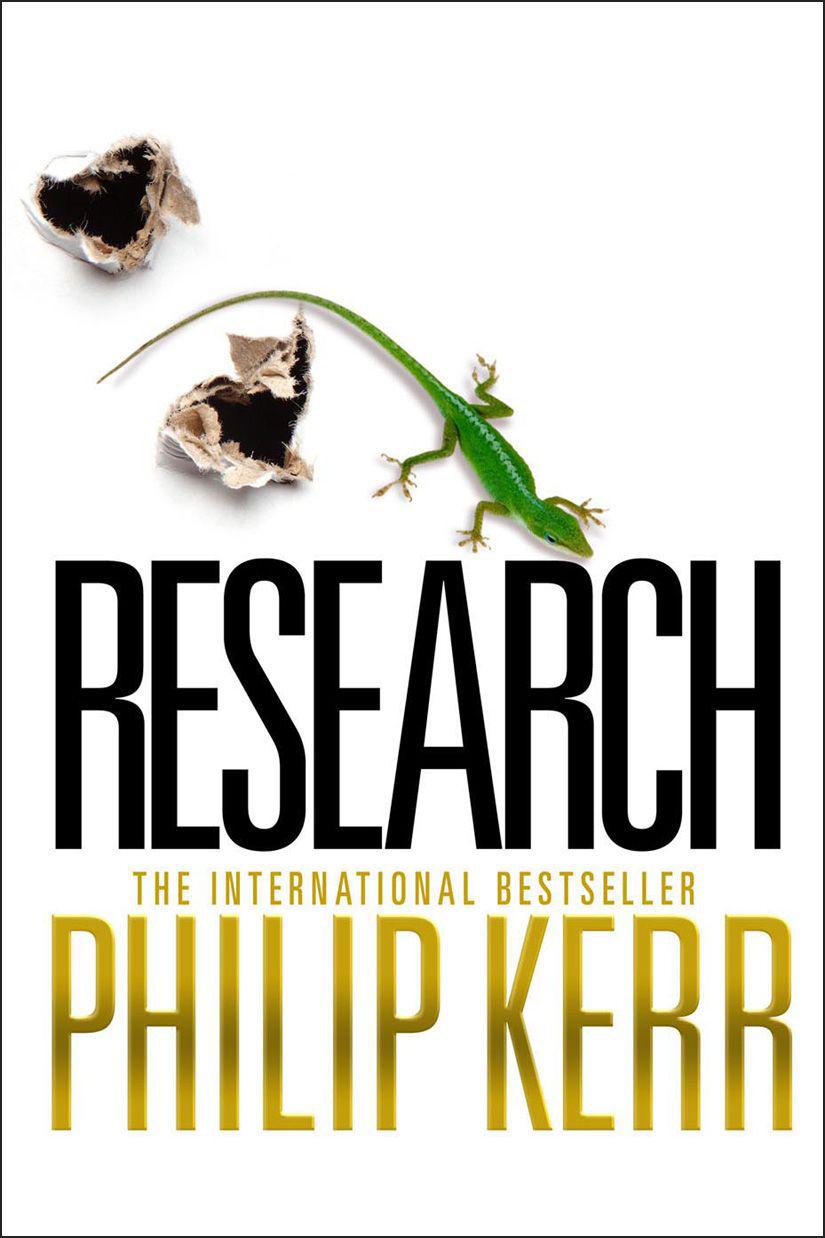 The rolling strip across the bottom of the screen shouts the news:
BESTSELLING NOVELIST JOHN HOUSTON'S WIFE FOUND MURDERED AT THEIR LUXURY APARTMENT IN MONACO.
Houston is the richest writer in the world, a book factory publishing many bestsellers a year - so many that he can't possibly write them himself. He has a team that feeds off his talent; ghost writers, agents, publishers. So when he decides to take a year out to write something of quality, a novel that will win prizes and critical acclaim, a lot of people stand to lose their livelihoods.
Now Houston, the prime suspect in his wife's murder, has disappeared. He owns a boat and has a pilot's licence - he could be anywhere and there are many who'd like to find him.
First there's the police. If he's innocent, why did he flee? Then again, maybe he was set up by one of his enemies. The scenario reads like the plot of one of Houston's million-copy-selling thrillers...
Contents

The moral right of Philip Kerr to be identified as the author of this work has been asserted in accordance with the Copyright, Designs and Patents Act, 1988.

March Violets
The Pale Criminal
A German Requiem
A Philosophical Investigation
Dead Meat
Gridiron
Esau
A Five Year Plan
The Second Angel
The Shot
Dark Matter: The Private Life of Sir Isaac Newton
Hitler’s Peace
The One from the Other
A Quiet Flame
If the Dead Rise Not
Field Grey
Prague Fatale
A Man Without Breath
Prayer

Children of the Lamp:
The Akhenaten Adventure
The Blue Djinn of Babylon
The Cobra King of Kathmandu
The Day of the Djinn Warriors
The Eye of the Forest
The Five Fakirs of Faizabad
The Grave Robbers of Genghis Khan

‘Write what you know.’
Mark Twain

It was the American novelist William Faulkner who once said that in writing you must kill all your darlings; it was Mike Munns – another writer but, like me, not half as good as Faulkner – who made a joke out of this quote when he telephoned my flat in Putney early that Tuesday morning.

‘It’s me, Mike. I’ve heard of kill your darlings but this is ridiculous.’

‘Mike. What the hell? It’s not even eight o’clock.’

‘Don, listen, switch on Sky News and then call me at home. John’s only gone and killed Orla. Not to mention both of her pet dogs.’

I don’t watch much television any more than I read much Faulkner but I got out of bed and went into the kitchen, made a pot of tea, switched on the telly, and after a few seconds was reading a rolling strip of news across the bottom of the screen: BESTSELLING NOVELIST JOHN HOUSTON’S WIFE FOUND MURDERED AT THEIR LUXURY APARTMENT IN MONACO.

About ten minutes later the twinkly-eyed Irish news anchor was announcing the bare facts of the story before asking a local reporter positioned outside the distinctive glass fan entranceway to the Tour Odéon, ‘What more can you tell us about this, Riva?’

Riva, a fit-looking blonde wearing a black pencil skirt and a beige pussy-cat-bow blouse, explained what was now known:

‘The writer–millionaire John Houston is being sought by Monaco police in connection with the murder of his wife, Orla, whose body was found early this Tuesday morning at their luxury apartment in the exclusive principality of Monaco. It’s believed that her murderer also killed Mrs Houston’s pet dogs. The sixty-seven-year-old Houston, who hasn’t been seen since Friday night, made his fortune as the author of more than a hundred books and is widely considered to be the bestselling novelist in the world, with sales of more than 350 million copies. He regularly tops the Forbes list of the world’s highest-paid authors with earnings estimated at over one hundred million dollars a year. Mrs Houston was aged thirty-seven; as Orla Mac Curtain she was a former Miss Ireland and actor who won a Tony Award for Best Leading Actress in a Musical for her portrayal of Sophie Zawistowska in
Sophie’s Choice: The Musical
. Orla Mac Curtain was generally acknowledged to be one of the world’s most beautiful women and had recently written her first novel. The couple were married five years ago at Mr Houston’s home on the Caribbean island of St Maarten. But other than the fact that they are treating her death as a murder the Monaco police have given us no information on the exact circumstances of Mrs Houston’s death. Eamon.’

‘Riva, Monaco isn’t exactly a large place,’ said the news anchor. ‘Have the police any idea where John Houston might have gone?’

‘Monaco’s less than a square mile in area and bordered by France on three sides,’ said Riva. ‘It’s only ten miles from Italy and I’m told you could even be on the North African coast in maybe ten or twelve hours. He owned a boat and he
had a pilot’s licence so it’s generally held that he could be absolutely anywhere.’

‘It’s like a scene from one of his books. John Houston was on this programme just last year and I read one of them then and I thought it was very good – although I can’t remember what it was called. He seemed like a very nice fellow. Have the police said how she died?’

I turned off the TV, refilled my mug with tea and was scrolling through the numbers in the contact list on my cellphone to find Mike’s telephone number when the landline rang. It was Mike Munns again.

‘Are you watching this, Don?’ he asked.

‘Yes,’ I lied. ‘But I think you’re jumping to conclusions here, Mike. Just because the Monty cops are looking for John doesn’t mean John actually did murder her. We’ve both written enough of his books to know that’s not how a plot works. The husband’s always the first and most obvious suspect in a case like this. It’s almost a given that he should be the early favourite. Any husband can be made to look as if he might have had a motive to kill his wife. Guilty until proven innocent, that’s how it always works. Mark my words, it will be someone else who turns out to be the murderer. An intruder. Orla’s lover, perhaps. Assuming she had one.’

‘
Nil nisi bonum
,’ said Munns. ‘But Orla was a gold-plated bitch and I certainly can’t imagine anyone loving her. If John did bump her off then I can hardly say I blame the poor bastard. I’m sure I’d have killed Orla if I’d had to live with her. Jesus, that woman would have tried the patience of Saint Monica. Do you remember the way she used to ignore Starri at the Christmas party?’

A dull and monosyllabic Finn from Helsinki, Starri was
Mike’s wife, but I could hardly have faulted Orla for ignoring her at the Christmas party. I was none too fond of Mike’s wife myself. I could easily have ignored her presence in a mug of tea.

I smiled. ‘Say nothing of the dead unless it’s good,’ I said. ‘That’s what
nil nisi bonum
is supposed to mean, Mike.’

‘I know what it fucking means, Don,’ said Munns. ‘I’m just saying that maybe Orla had it coming. Her and those bloody mutts. And I’m surprised to hear you of all people defending her. She didn’t like you at all. You do know that, don’t you?’

‘Of course I know it but, strictly speaking, I don’t think I was defending
her
,’ I said. ‘It was John I was defending. Look, our former friend and employer is a lot of things, and many of them have four asterisks on the printed page if it appears in a newspaper, but he’s not a murderer. I’m sure of it.’

‘I’m not so sure. John has one hell of a temper. Come on, Don, you’ve seen him when he gets into one of his rages. He was Captain bloody Hurricane. Strong, too. Those hands of his are as big as car doors. When he makes a fist it’s like a wrecking ball. I wouldn’t like to tangle with him.’

‘You did tangle with him, Mike. As I recall you hit him and for some reason that is still beyond me he didn’t hit you back, which I must say showed a remarkable amount of control on his part. I don’t think I could have been as restrained as he was.’

This was truer than Munns probably realized; I’d always wanted to punch him on the nose – perhaps now more than ever.

‘Yes,’ admitted Munns, ‘but that was only because he was feeling ashamed of the way he’d behaved already. For bawling me out so violently.’

‘In fairness he might also have sacked you for hitting him, Mike,’ I added. ‘And he didn’t do that either.’

‘Only because he needed me to finish a book.’

‘Maybe so, but I think you’re being a little quick to judge him here.’

‘Why shouldn’t I judge him? No one knew John Houston better than us. Look, I don’t owe him a thing. And in the long run, he sacked us all, didn’t he? His friends and colleagues.’

‘That was pizza money for a bloke as rich as him.’

‘Come on, Mike, you could buy a whole pizza restaurant for what he gave the four of us.’

‘All right, a watch then. He spent more on wristwatches than he did on our compensation. You can’t deny that.’