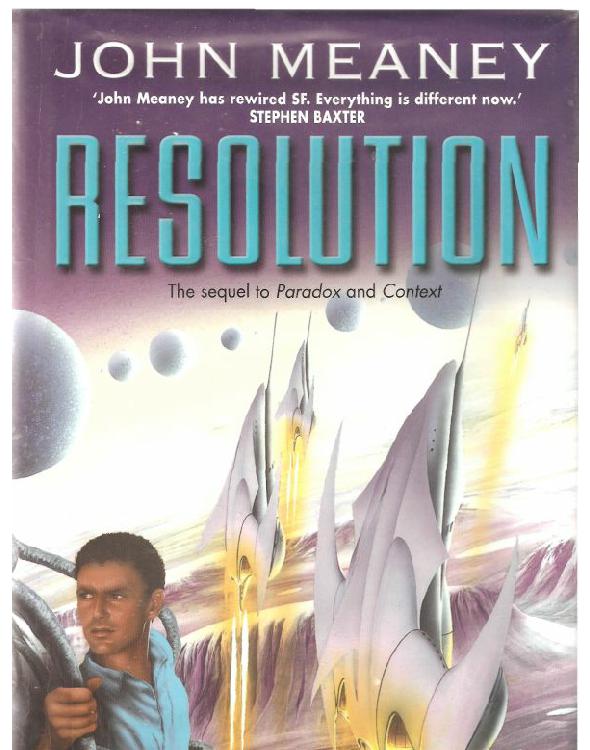 The Barnes & Noble Review
John Meaney's Nulapeiron Sequence -- a sweeping science fiction epic that delves into the nature of time, space, and human evolution -- reaches its climactic conclusion in
Resolution,
a novel that pits unlikely one-armed hero Tom Corcorigan (and the entire population of the planet Nulapeiron) against a mysterious alien presence called the Anomaly, a relentless entity that overwhelms worlds and absorbs their living components.

As
Resolution
(the sequel to
Paradox
and
Context
) begins, Corcorigan is looking forward to some well-earned downtime. With the War Against the Blight finally over, the war hero has married Elva, and they're trying to enjoy some semblance of a honeymoon. But with the Anomaly -- a far more powerful adversary than its Blight offspring -- threatening, Corcorigan must somehow unify a war-torn and socially divided populace before Nulapeiron is absorbed by the Anomaly and turned into one of its innumerable hellworlds. With the last remnants of humanity gathered inside one of the planet's many terraformer spheres, Corcorigan has one last chance to unravel the mystery of the spacetime-warping Oracles and the obsidian-eyed Pilots before the inevitable end

Justifiably compared to Frank Herbert's Dune saga for its mind-boggling thematic complexity, world-building mastery, and the numerous similarities between the protagonists, Meaney's Nulapeiron Sequence is, simply put, a hard science fiction masterpiece. And although the plotlines are powered by some highly cerebral subject matter (backward causality, mu-space, a fractal universe, etc.) the story succeeds in large part because of the sheer magnetism of Tom Corcorigan, one of the most complex -- and paradoxical -- protagonists ever created in the genre: "the bastard intellectual love-child of [Richard P.] Feynman and Bruce Lee."
Paul Goat Allen

A lean figure, wrapped in a long cape, stood atop a slender footbridge spanning Gelshania Boulevard. It was an hour before dawnshift. High above the boulevard, attached to the baroque, ornate panels of the concave ceiling, bronze-and-platinum glowclusters shone dimly, as if sleeping. Down below, the boulevard’s floor was of polished butter-yellow metal. At this hour, only a few servitors walked there, carrying out their errands.

Tom Corcorigan was a Lord, and there were people in power who knew the part he had played in the War Against The Blight; but nothing could eradicate the memory of his lowly childhood and the deprivations of his years in servitude.

Beneath the cape, his missing left arm ached.

There was movement, far along the shrinking perspective of the boulevard tunnel. Tom recognized the vanguard immediately for what it was: a cohort of greystone warriors, neither human nor living statues but somehow both, their slit-eyes covered with nictitating membrane and impervious to sporemist or smartwraith, their bodies formed of granite and morphstone, tensing to unbelievable hardness in the heat of battle.

Expensive,
Tom thought.
Who is it that can afford their services?

This was the Primum Stratum of Demesne Kalshuna, an old rich realm that had suffered during the war. What reason could the Liege Lord’s clan-members have for sneaking around before dawnshift? As far as Tom knew, he and Elva - she was fast asleep in their guest apartment - were the only visiting nobility.

Behind the greystone phalanx, a levanquin floated, moving ponderously above the metallic yellow floor. Eerie blue reflections slid across its bubble-covered carapace; inside, a bulky, shaven-headed figure was barely visible. Behind the levanquin, more greystone warriors walked, and among them shuffled twin rows of manacled servitors, dressed alike in shabby blue livery.

Haven’t I tried enough to eradicate this?

The vehicle’s occupant was an Oracle, and these servitors could surely bear witness to the intense, perverse stimulation that most Oracles required to bring their strange, fragmented mentalities into a semblance of coherence, to match their thoughts to normal timeflow.

Like every Oracle, this one would be a product of the Collegium Perpetuum Delphinorum. The nearest Collegium (for there were three sites in the world) had survived enemy occupation during the War Against The Blight ... and it was Tom’s and Elva’s destination. This was the eighth night (or early morning) of their honeymoon; their peregrination would end at a place which took innocent children, with their families’ consent, and turned them into monsters.

And one of those abominations occupied the levanquin sliding at this moment beneath the footbridge.

I
could kill you now.

A drop onto the bubble-canopy, a swift cut from the graser-bracelet he wore - a wedding present from Elva - and Tom would be inside. Then his bare hand would be enough to dispense justice on behalf of those who suffered so that Oracles might thrive.

Whether Tom could escape from an enraged cohort of greystone warriors was another matter ... but he knew already that he was not going to try. He had no intention of making a widow of Elva so soon.

A soft smile alighted on Tom’s face, and he turned away from the sights below, pulling up his cape’s hood, and strode on across the footbridge, heading back towards his and Elva’s temporary home.

Tom walked the length of the apartment’s hallway. Its floor was square-patterned, milky violet quartz and hard transparent glass, beneath which lambent orange lava flowed. Just for a moment, he caught a glimpse of hexagonal flukes as a thermidor wriggled and swam through blazing hot magma.

A doorshimmer evaporated, and he stepped through into the darkened lounge. An oval window overlooked the Benbow Cavern, containing a scene of joyful debris. Down below, torn banners floated in ornate pools; discarded flagons decorated quiescent fountains which last night had flung polarized streamers of thousand-hued water in high, triumphant arcs. There were a few sleeping bodies; on one tilted lev-bench, a Lord-Meilleur-sans-Demesne lay sprawled against a commoner.

Mesodrones were scooping up the litter.

Sooner or later the victory celebrations would have to cease, and everyone would turn to rebuilding their lives. For now, why not? The Blight had been a vast malignant lifeform, enslaving millions of minds as it reached throughout the realms of Nulapeiron, and they had been lucky to beat it back and destroy it. They had caused it to confront an entity which lived in mu-space, a possibly god-like being that had once been human, whose name was Dart. It was the Dart-entity which had defeated the Blight.

So why aren‘t I happy?

But Tom knew that the Blight had been a spawned seedling, and that during the final battle it had been trying to contact its parent organism: the vast worlds-spanning hiveform known as the Anomaly. That Anomaly had already subsumed entire planets. Even in Nulapeiron, where the teaching of history was tightly controlled, the Anomaly was a dark legend synonymous with fear.

And the closer Tom and Elva drew to the Collegium Perpetuum Delphinorum, the less Tom was able to sleep. During nightshift, he kept snapping awake, convinced that the Anomaly was already aware of Nulapeiron’s existence. If it had any curiosity concerning a world capable of killing its offspring, it might turn its attention here ... and Tom was under no illusion that the trick they had pulled off against the Blight could be made to work again.

Little Tease by Amy Valenti
The Grievers by Marc Schuster
The Blinding Knife by Brent Weeks
Irish Mist by Caitlin Ricci
The Secret Soldier by Berenson, Alex
Margaret St. Clair by The Best of Margaret St. Clair
The Convicts by Iain Lawrence
Apple Turnover Murder by Joanne Fluke
White Mare's Daughter by Judith Tarr
3 Among the Wolves by Helen Thayer