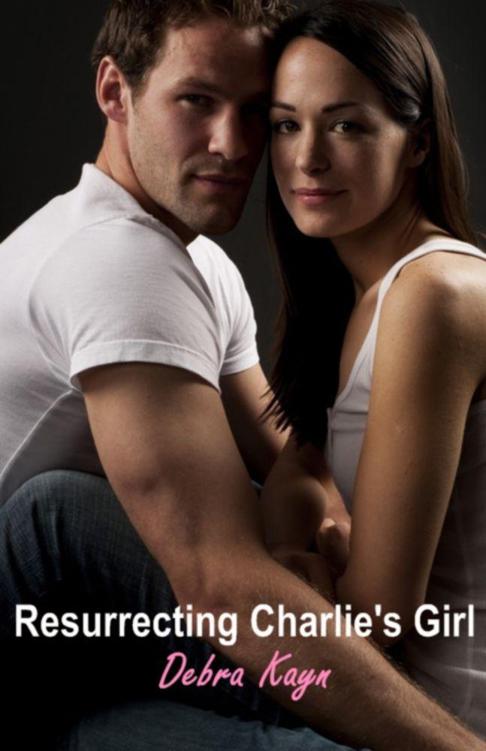 This is a work of fiction. Names,
characters, places, and incidents are products of the author's imagination or
are used fictitiously and are not to be construed as real. Any resemblance to
actual events, locales, organizations, or persons, living or dead, is entirely
coincidental.

All rights reserved. No part of this
book may be used or reproduced electronically or in print without written
permission, except in the case of brief quotations embodied in reviews.

To all the women who have walked in
Charlise's shoes:

You are stronger than you know.

The
sun peeked through the treetops as Charlise Blatwell hurried to the main office
with her packed bag. Stepping inside, she paused and gazed out the door before
turning her attention to Bill Ayers, the owner of The Ridge campground.

"Morning,
Charlise." Bill slid off the stool behind the counter.

She
shuffled over to him and dropped her bag at her feet. The lump in her throat
grew bigger. He was a good man. She regretted having to leave him this way.

Bill
darted from behind the counter and laid his hands on Charlise's shoulders.
"What's going on? I thought things were working out good the last couple
months."

She
shrugged. Guilt over not explaining to him why she had to leave swamped her.
"I'm so sorry, but could I get my pay now?" Bill squeezed her shoulders
and walked around the counter to the cash register. He opened the till,
fingered the bills, and thrust the money at her.

"Bill…"
Charlise protested at the amount he counted out. "It's too much." She
pushed his hand away.

"Nonsense.
You worked harder than anyone. Including me." He placed the money in her
hand and patted it closed. "You need anything else, you find your way back
to The Ridge, and old Bill will help you."

Bill
kissed her forehead. She squeezed her eyes shut to keep the tears at bay. I'm
going to miss you.

"Thank
you, Bill. Without you—" She inhaled.

Bill
waved off her thanks. "Just take care of yourself."

"I
will." She shouldered her bag.

"Stay
safe, and God be with you, child."

She
nodded. The extra money Bill gave her would take her further this time.
Hopefully, far enough so that she might stay in one spot longer.

A
deafening blast cut off the tinkling of the bell announcing someone's arrival
and rocked the room. Charlise dove down beside the counter and wrapped her arms
over her head. She waited until her ears stopped ringing and stood. She looked
at Bill's strange expression when he gazed over her shoulder toward the door.
He stumbled toward her.

Bill
held on to the counter and worked his way toward Charlise. He collapsed in front
of her. Blood soaked the front of his shirt. She whipped her head around,
frantically searching for the source of the shot.

Charlise
stepped over Bill's prone body and moved behind the counter. She wanted the
counter between her and Jared Blatwell. Her ex-husband stood with his gun
pointed at her. She glanced down at Bill and viewed death. I'm sorry, Bill. I
never should've come here.

"You've
made me very angry." Jared stepped toward the counter. "I've missed
you. You have no idea how it is for me to wake up every day without you beside
me in bed." His dark eyes and stern, hawkish features held Charlise's
attention. "Not knowing what you're doing or if you're safe."

Jared
stepped over Bill's body. She whimpered and moved farther back until her heels
hit the wall.

"No,
no, no." He shook his head and waved the gun from side to side.
"You're going to stay right there."

She
froze. Her eyes darted to the afghan on the shelf. She'd never make it to the
pistol in time.

"Now,
walk around here nice and slow." Jared aimed the gun at her chest.

She
shuffled around the counter, her arms stiff at her sides. Panicked, she moved
around Bill's body and covered her mouth to keep from screaming. Oh dear, sweet
Bill.

Jared
reached out, grasped her upper arm, and pulled her closer. She winced, but
didn't try to escape. "You're going to walk out the door like we're taking
a friendly walk to my car. If you scream for help—"

He
jabbed the pistol into her back. He'd kill her in an instant to save himself.
She blinked to stop the sudden onset of tears. Her back hurt where his gun dug
into her spine, and she walked faster to try to lessen the pressure.

She
tripped in the gravel, but Jared held her tight against the front of him and
urged her to walk faster. If he got her in his car, her escape of the past few
months would be for nothing. She'd go back to square one. And this time, she
wasn't sure she possessed the strength to find a way to survive his abuse.

Her
carefully laid plans of the past two months had failed, and what did she have
to show for it? Nothing. The hair she'd dyed black, the second-hand clothes
she'd worn, her new location, and where she'd worked hadn't kept Jared from
finding her. She'd made too many bad decisions, and people she loved were dead
because of her.

"Keep
walking. Smile." Jared let go of her, but kept the gun pressed into her
back.

A
movement ahead caught her attention. She picked up her pace and followed
Jared's directions. Tom Brannet, a guest at the campground, walked along the
path straight toward Charlise carrying the blanket she'd covered him with last
night when she found him napping in the lounger outside and the campfire burned
out.

She
gazed right at him and forced a smile on her face. Please don't stop. Keep walking.

He
stopped. His alert, green eyes stared back at her in question. Jared's gun
poked her in the spine. Her smile faltered, her knees buckled, and Jared
grabbed her by the upper arm to keep her on her feet.

"I
think this might belong to you." Tom held out the blanket.

She
cleared her throat. "Yeah, yes, thank you."

Jared
gave her another stab with the pistol, and she reached out to take the blanket.
Her hands lingered on Tom Brannet's hands. Big, strong hands that might stand a
chance against Jared. No.

Jared
ground the weapon into the same spot on her back. She clutched the blanket to
her chest, wishing it could turn into a bulletproof vest. She nodded, stepped
around Tom, and continued to walk.

The
image of Jared's car blurred into a black blob at the end of the path. All this
time of living each day with her senses on hyper-alert and she failed, yet
again.

"Get
moving." Jared pushed her from behind.

Charlise
kept her pace. Her life over the second she climbed into the car, and it didn't
matter if he killed her now or tormented her later. Every minute she spent with
Jared, she lost a small piece of herself, never to get it back.

The
shove from behind gave Charlise no time to protect herself. The ground rushed
up and her cheek met the gravel. A heavy weight landed on her and pushed her
body into the sharp rocks. She closed her eyes. If this was the time for her to
die, so be it.

"Come
on, come on." Someone pulled her arm.

She
opened her eyes. Tom? She gazed from Tom to the extra weight across her body.
Jared's unconscious body lay across her legs, pinning her to the ground.

She
clawed out at Tom's hands, trying to pull herself out from under her
ex-husband. Whatever Tom did to Jared, it gave her the chance she needed to run
away.

"Let's
go. I'll get you somewhere safe." Tom wrapped his arm around her waist to
support her weight.

Tom's
long strides made better time than her feeble attempt, and she let him half
carry her back toward the office. Tom cut across the grass and headed toward
the cabins.

Tom
kept jogging. Her size didn't compete with his, and she exhausted herself in
her fight. He kicked in the door of cabin six. Another man in the room jumped
up from the bed. Tom passed her to the other man and stepped away, but Charlise
clung to his hand.

"Please,
don't leave me." She squeezed him. For some reason, she'd rather stay with
Tom than be shut up in the cabin as a target for Jared or one of his men. She
was terrified he'd go back and Jared would kill him.

"I'll
be right back. Stay with Pete." He nodded over his shoulder. "He's a
good guy. He'll keep you safe."

Charlise
swore the air was sucked out of the room with Tom's exit. She panted, afraid
she'd pass out and Jared would have the advantage. She glanced beside her to
the man who held her arm. Broad shouldered and a foot taller than her, the dark
haired man blocked her exit with his body. She had to get to her car. She
jerked her arm free and turned to make a run for it.

"Whoa,
there." Pete snagged her around the waist and hauled her back from the
door. "Tom'll be back. Let's sit tight until we hear from him."

"You
don't understand. I have to get away before that man finds out I'm still at the
campground." She pushed at Pete's hands, but he wasn't letting her go.
"I'm not sure what kind of trouble Tom got in, but if he asked me to keep
you in this room, then I keep you in this room."

Pete
shook his head, and she groaned. "Please. He'll kill you just like he
killed Bill."

Pete's
head snapped back, but his arms remained around Charlise. "Bill?"

She
nodded. "The owner of The Ridge. Oh God, you have to understand. I need to
leave right now."

Pete
whistled, and let go of Charlise with one hand to fumble with the cell phone
attached to the side of his belt. She tugged at her arm, but his hold didn't
budge.

"Boss?
Tom's got him some trouble outside. Possible armed man and an attack on the
owner of The Ridge."

"Boss,
Tom's back. We're meeting in our cabin." Pete ended the phone call, and
turned his attention to Tom. "Fill me in."

Pete's
hold on Charlise loosened, and she moved away from him. Her stomach heaved and
she covered her mouth. If Jared was gone, then he could show up anytime and
finish what he came to do. These men didn't understand who they were dealing
with.

She
reached into the front pocket of her jeans and wrapped her fingers around a
single key. She shifted toward the door. Neither man seemed to notice her
advance. If she could get to her car without Jared catching her, maybe she'd
make it somewhere to hide for a little while.

She
needed time to think.

The
doorknob turned in her hand, and the door opened. She backed up to get out of
their way. Two other men strode inside like they owned the place.