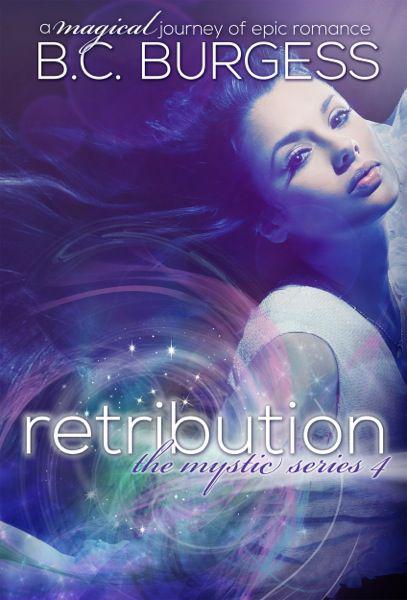 I dedicate this book to the members of The Mystic Coven.

Your love for the series makes my heart soar higher than witches and wizards fly.

Retribution is not a stand-alone novel and begins a few hours after Deception ends. There is no recap of the story.

When we last left Layla, she and Quin had finally consummated their relationship and were in the bathtub at Karena’s Royal Suite. They’ve bonded, increasing their magical power, and though they couldn’t be happier with each other, their world is more dangerous than ever.

Agro wants proof of Layla’s location before invading the Conn/Kavanagh coven, but his patience is dwindling, and after a fit in which he slaughtered over fifty of his own soldiers, so is his army. Agro wants nothing more than he wants Layla, so he has given Guthrie three days to collect more soldiers and recruit new soothsayers. If Agro doesn’t get his treasured witch soon, others will pay the price with their lives.

The snow came at Guthrie in cold, gray swirls that matched his stormy gaze and the granite peaks slicing through the eastern sky. The fluffy flakes that slipped past the hood of his crimson cloak clung to his lashes then succumbed to his magical heat, melting into quivering droplets.

Guthrie expected no less of the flight over Ship Mountain, which found itself blanketed in snow six months out of the year, so he didn’t bother cursing nature as he wiped away the moisture blurring his view. The unit behind him, however, started grumbling the moment they began following the Klamath Mountain Range into California.

Noon had come and gone, and Guthrie knew the soldiers were tired and hungry. They usually slept during the day, and they’d been on the move since dawn. But Agro had given Guthrie a mere three days and two nights to collect an army large enough to obliterate the coven protecting their target – a witch more powerful than any other.

Because Agro had already summoned the troops near Oregon – only to slaughter most of them – rallying more would require a trip through California, Nevada, Wyoming and Montana. Then there was the matter of flying back to Oregon. The boss wanted Guthrie back in the Clatsop State Forest before the sun snuffed out the third night, and if the lieutenant found himself unable to make his deadline, he’d be wise to fly in the opposite direction, because those who failed Agro generally failed to draw breath long enough to regret their mistake.

Wiping away another melted snowflake, Guthrie dipped into a ravine and slowed to a hovering stop. According to Agro’s map, a unit of Dark Elite soldiers camped nearby, awaiting the boss’ call.

Guthrie lifted the concealment spell on his body and opened the sleeve of his cloak, letting his snake taste the air. Then he dug into a hidden pocket and retrieved a map printed on a scroll of parchment.

Several soldiers dropped into the gully around him and lifted their concealment spells, relieved to be out of the wind, but Guthrie ignored their sighs as he unrolled the map and mumbled the word
Appalachia
. Wind whistled along the jagged mouth of the frozen chasm as he scanned the map’s legend. Then he flipped the scroll over and located the correct coordinates. The camp was less than ten miles away.

Tucking the map in his cloak, he glanced at his unit, who wisely kept their complaints to themselves while awaiting their next command. Most of them were experienced soldiers who knew better than to expect a reward for their obedience, but Guthrie decided to throw them a bone.

After ushering Silestra back into his sleeve, he concealed his body and floated toward open air. “We’ll take a break and eat when we reach the camp ten miles south, but then you have a twelve hour task ahead of you.”

“What will you have us do?” Lynette asked.

Guthrie looked at her, a woman as deadly as she was beautiful, a tempting rose with razor sharp thorns… which she’d recently plunged into his sides with whispers of rebellion. “We’ll split up,” he answered.

Lynette scowled, her porcelain skin creasing around her violet eyes and red lips.

Guthrie ignored the look and continued. “A few of you will accompany me to Nevada to fetch Agro’s soothsayers, while the others continue south. There are a few more settlements in California I don’t have time to visit. Now conceal yourselves. A hot meal is less than twenty minutes away.”

With exact coordinates, they easily found their destination and entered the sleepy camp unannounced, bringing down protection spells with predetermined passwords.

A nearby guard jolted to attention and scanned the crimson cloaks. Then he met Guthrie’s confident stare and tried to stand taller. “What’s the meaning of this?”

Guthrie sized the man up then looked around, pinpointing the largest tent. “I’m Agro’s new lieutenant, here on his command.”

The guard slowly relaxed and eyed the rest of the travelers. “What happened to Farriss?”

“Good question,” Guthrie returned, heading for the tent undoubtedly housing the camp’s commander. “He went missing five days ago. Wake everyone and tell them to prepare to depart.”

Lynette huffed and crossed her arms. “I thought a hot meal was on the menu.”

Guthrie narrowed his eyes on her, and her arms slid to her sides as she bowed her head. “Sir.”

Guthrie stifled a smirk, wise enough to know Lynette wasn’t submitting. She was merely appeasing him in an effort to get what she wanted, which happened to be his ear, so that she may whisper mutinous plots into it. And considering her outrageous schemes, she probably wanted to build him up in front of the other soldiers, cement him as a man worthy of an army’s obedience and loyalty.

Guthrie found the guard’s curious stare and set him to task. “Have someone prepare breakfast. Everyone will need sustenance for their journey.”

“What journey?” a gruff voice cut in.

Everyone looked over, watching the camp’s commander emerge from his tent as nude as the day he was born. A witch in a skimpy, red slip followed him out, paying little attention to the crowd as she made her leave, and the commander gave her ass a slap before rubbing the sleep from his eyes. His blond hair and beard were in need of grooming, and his puffy eyelids bore witness to his disturbed slumber. But at thirty-two-years-old, he had youth on his side and stood as tall and sturdy as his morning wood. He was also a bonded child and had a thick and solid power-band to prove it.