Reunited with Her Italian Ex 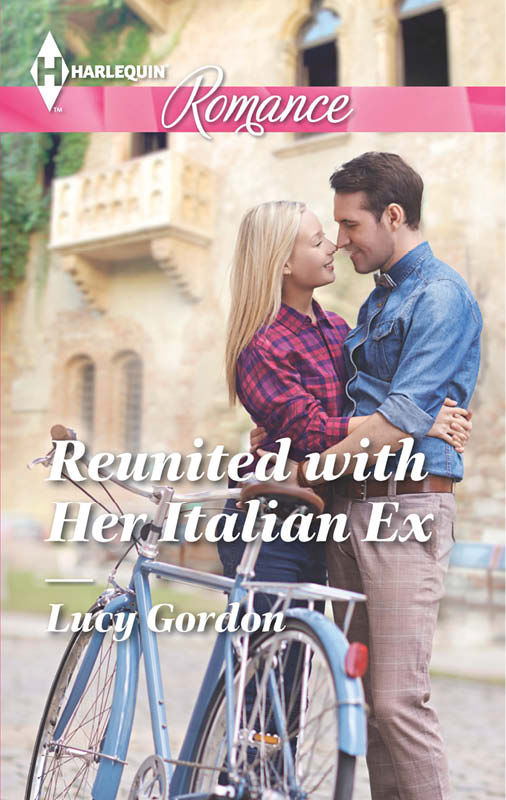 Freelance journalist Natasha needs to find workâfast! When a job comes up in Verona she jumps at the chance. Her heart might have been broken by a charming Italian, but with few other options, promoting the city seems like a dream assignment. Until she meets her new bossâ
and ex!
âMarioâ¦

Mario might not be the playboy she remembers, yet Natasha strives to keep their relationship professional. But in the city of
Romeo and Juliet
, pursuing their star-crossed romance is hard to resistâ¦

“You've danced with everyone else,” he observed. “Will it ever be my turn?”

But as he spoke, his arm went around her waist in a grip too firm for her to resist, even if she had wanted to.

Once before they had danced together. One night in Venice, when they had been having supper at an outdoor cafÃ© in St. Mark's Square, a band had started to play, and before she'd known it she'd been waltzing in his arms.

“Is this all right?” he'd whispered.

“I'll let you know later,” she had teased.

It had lasted only a few minutes, and she had promised herself that one day she would dance with him again. But the next day they had broken up, and it had never happened again. Until now.

It was unnerving to feel his arms about her, his hand on her waist, holding her close. Her heart was beating softly but fervently. She glanced at him, trying to know if he felt the same. Would he invite her to dance with him again?

Verona has always been one of my favorite Italian cities. Being Italian by marriage, I've visited many places in that lovely country: Venice, Rome, Florence. They are all beautiful, but Verona has something else: the lingering attraction of the world's best known and most heartbreaking love affairâ
Romeo and Juliet
.

Some of the story is legend, but long ago there really were two young people who sacrificed their lives for their love, and their tragic story moves people to this day. Their story stayed with me when I went to Verona, walking the picturesque streets and going to see Juliet's house. There her statue stands, gazing at the visitors who seek to share her secrets.

Natasha, my heroine, originally goes to Verona to work, but before long she is enfolded in the magic of the legend. At times her own love seems equally fated to end sadly, but she has the courage to cling on and help her lover achieve the happiness that was always meant to be.

Juliet would have been proud of her.

REUNITED WITH HER ITALIAN EX

Lucy Gordon
cut her writing teeth on magazine journalism, interviewing many of the world's most interesting men. She's had many unusual experiences, which have often provided the background for her books. Once, while staying in Venice, she met a Venetian who proposed in two days, and they've been married ever since. Naturally this has affected her writing, in which romantic Italian men tend to feature strongly. Two of her books have won a Romance Writers of America RITAÂ® Award. You can visit her website at
lucy-gordon.com
.

Not Just a Convenient Marriage

The Secret That Changed Everything

Visit the Author Profile page at
Harlequin.com
for more titles

V
ENICE
,
THE
MOST
romantic city in the world.

That was what people said, and Natasha was becoming convinced that it was true. Where else could she have met the man of her dreams within hours of arriving, and known so soon that she was his and he simply must become hers?

Sitting in a cafÃ© by a small canal, she looked out at the sun glittering on the water. Nearby she could see a gondola containing a young man and woman, wrapped in each other's arms.

Just like us
, she thought, recalling her first gondola ride in the arms of the man who had changed the world in moments.

Mario Ferrone, young, handsome, with dancing eyes and a rich chuckle that seemed to encompass the world. She'd met Mario just after she'd arrived in Venice on a well-earned holiday. He'd insisted on showing her the city. As his brother owned the hotel where she was staying, she'd briefly thought this a professional service, but that idea soon changed. There was an instant attraction between them, and nothing had ever seemed more wonderful than the time they spent together.

Until then, there had been little in her life that could be called romance. She was slim, pretty, humorous, with no difficulty attracting admirers. But where men were concerned she had an instinctive defensiveness.

It went back to her childhood, when her father had abandoned his wife and ten-year-old daughter for another woman. Until that moment Natasha's life had been happy. Her father had seemed to adore her as she adored him. But suddenly he was gone, never to get in touch again.

Never trust a man
, her mother had told her.
They'll always let you down.

She'd been content to heed the warning until Mario came into her life and everything turned upside down.

Her own reactions confused her. Her heart was drawn to Mario as never before to any other man. Sometimes her mother's voice echoed in her mind.

No man can be trusted, Natasha. Remember that.

But Natasha felt certain that Mario was different to all other menâmore honest, more trustworthy, more faithfully loving.

Last night he'd kissed her with even greater fervour than before, murmuring, âTomorrow I want to...' Then he'd stopped, seeming confused.

âI can't tell you now...but tomorrow everything will be different. Goodnight,
mi amore
.'

Now here she was in the cafÃ© where they often met, waiting for him to appear and transform her world yet again.

She almost ached with the yearning to know what he'd meant by âeverything will be different'. Was he going to propose marriage? Surely he must.

Oh, please hurry
, she thought. How could Mario keep her on tenterhooks when it mattered so much?

Suddenly, she heard his voice call, âNatasha!' Looking up, she saw him walking by the canal, waving to her from a distance.

She had a strange feeling that he was on edge.

âIs everything all right?' she asked.

His eyes never left her and every moment her conviction grew that tonight they were going to take the next stepâwhatever it might be.

He took her hand. âThere's something I've been trying to tell you for days butâ'

âTrying? Is it so hard to tell me?'

âIt could be.' His eyes met hers. âSome things just aren't easy to say.'

Her heart was beating with anticipation and excitement. She knew what he was going to say, and she longed to hear it.

âThat depends how much you want to say them,' she whispered, leaning close so that her breath brushed his face. âPerhaps you don't really want to say this.'

âOh, yes, you don't know how much it matters.'

But I do know
, she thought happily. He was going to tell her how much she meant to him. In a moment her life would be transformed.

She took his hand in hers, sending him a silent message about her willingness to draw closer to him.

He hesitated and she regarded him, puzzled. Was it really so hard for him to reach out to her?

âYou don't need to be good at it,' she urged, tightening her clasp on his hand. âJust say itâ'

The screamed word stunned them both. Natasha looked up to see a woman standing by the table, glaring at them. She was in her thirties, voluptuous, and would have been beautiful but for the look of livid hatred she cast on Mario.

Mario's face was tense and pale as Natasha had never seen it before. He rose and confronted the woman, speaking angrily in Italian and pointing for her to leave. She screamed back at him in English. Then turned to Natasha.

âIt's about time you knew what he is really like. One woman isn't enough for him.'

She raved on until Mario drew her into a corner, arguing with her vigorously. Natasha could no longer hear the words but there was no mistaking the intensity between them. The dark-haired woman's rage grew with every moment.

âHe's a liar and a cheat,' she screamed in perfect English.

âMario,' Natasha said, âwho is this woman? Do you really know her?'

âOh, yes, he knows me,' the woman spat. âYou wouldn't believe how well he knows me.'

For a moment Natasha was tempted to thrust herself between them and tell Mario what she thought of him in no uncertain terms. But then her impetuous temper flared even higher, driving her to a course of action even more fierce and desperate. While they were still absorbed in their furious encounter, she fled.

She ran every step of the way to the hotel, then up to her room, pausing at the desk to demand her bill. Nothing mattered but to get away from here before Mario returned. It had all been a deception. She'd believed in him because she'd wanted to believe, and she should have known better. Now she was paying the price.

âYou were right,' she muttered to her mother's ghost. âThey're all the same.'

The ghost was too tactful to say
I told you so
, but she was there in Natasha's consciousness as she finished packing, paid her bill and fled.

She took a boat taxi across the water to the mainland, and from there she switched to a motor taxi.

âAirport,' she told the driver tensely.

Oh, Mario
, she thought as the car roared away.
Traitor.

Operation: Midnight Rendezvous by Linda Castillo
[Roger the Chapman 02] - The Plymouth Cloak by Kate Sedley
The United States of Paranoia by Jesse Walker
Lady Louisa's Christmas Knight by Grace Burrowes
Kaddish for an Unborn Child by Imre Kertész
Cold Fear by Rick Mofina
SHTF (NOLA Zombie Book 0) by Zane, Gillian
Camp by Elaine Wolf
A Study in Red - The Secret Journal of Jack the Ripper by kindels
Will of Man - Part Two by William Scanlan