Read Revenge of the Wannabes Online

Revenge of the Wannabes 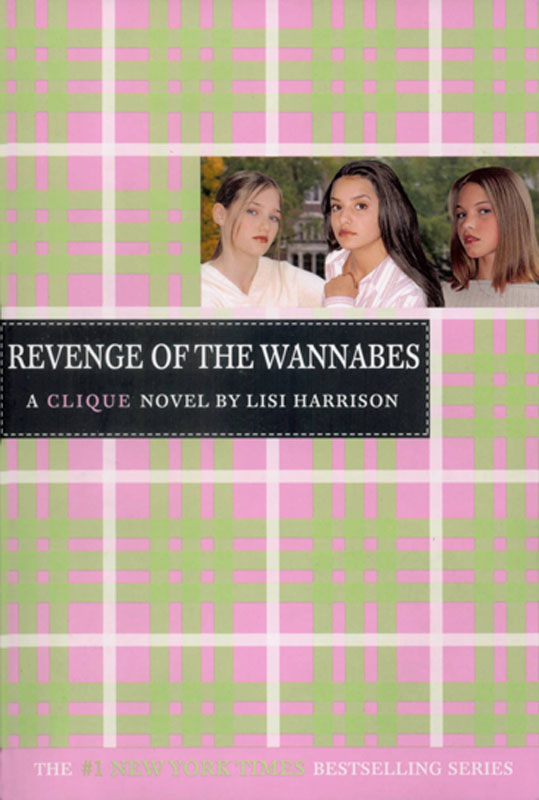 Visit our Web site at
www.HachetteBookGroupUSA.com
.

The Clique The A-List

Sun Of A Beach Tanning Salon

The Block Estate Outside Glu Headquarters

The only thing harder than getting in is staying in.

If you have to ask, you’ll never be on …

REVENGE OF THE WANNABES

INVASION OF THE BOY SNATCHERS

THE PRETTY COMMITTEE STRIKES BACK

IT’S NOT EASY BEING MEAN

SEALED WITH A DISS

If you like
THE CLIQUE
, you may also enjoy:

Bass Ackwards and Belly Up
by Elizabeth Craft and Sarah Fain

Secrets of My Hollywood Life
by Jen Calonita

Alicia Rivera usually thought sweating was a sign of weakness. But today she flaunted her shiny forehead like a badge of honor. It proved how hard she had just danced and would remind every girl in the class that she was the best.

Alicia lived for Thursdays at 4:30
PM.
She craved the clean, lemony smell of the studio’s wood floors and felt reborn the second she inhaled the clean, crisp air that hummed from the ceiling vents. She loved being surrounded by mirrors and pretending that she was a professional dancer in a music video. But the main reason Alicia took modern jazz lessons was because Massie Block didn’t. And that meant every week, for one whole hour, Alicia Rivera was the most popular girl in the room.

“This is the final combination of the day, so make it count.” Sondra, the no-nonsense instructor, pinched the waist of her low-rise Capezio pants and folded them over twice, revealing her perfectly sculpted six-pack.

“You don’t get abs like these watching the WB.” She slapped her stomach. “Do you, ladies?”

The room was silent as fourteen girls caught their breath.

Alicia saluted Sondra and shouted back, “No, sir!”

“What was that?” Sondra looked around the room.

Alicia immediately regretted talking back to her teacher until she heard Catherine Carlisle let out a snort. Then a few other girls snickered too. Alicia focused on the ground, trying to look sorry, but she loved being the center of attention, and it was written all over her face. She lined up her head with Olivia Ryan’s, hoping her friend’s blond ringlets would hide her smile from Sondra. But it didn’t work.

Sondra aimed her piercing green cat eyes in Alicia’s direction and stared for what felt like nine lives. Alicia could feel her insides starting to shake from all the nervous laughter she was trying to suppress and willed her teacher to look away before she exploded.

Alicia craned her neck out from behind Olivia. She widened her brown eyes, hoping to look innocent, and ran her hands over the top of her head, where her glossy black hair had been slicked back into a high ponytail. “Yes?”

“Please come to the front of the class.”

Her stern yet steady tone made Alicia even more nervous, and she pinched the back of Olivia’s elbow in a silent cry for help.

Olivia casually turned around and used her big navy blue eyes to let Alicia know she was wishing her luck.

Alicia lifted her chin and lowered her shoulders to demonstrate perfect “jazz posture” before she started to make her way to the front of the class. It was one thing to get in trouble for a funny comeback, but getting busted for bad form would have been mortifying.

Alicia took her time slowly weaving her way through rows of Lycra-covered bodies. Her father always told her she was “an exotic beauty” and a “special girl, well worth waiting for,” and so Alicia had decided never to rush for anyone. Not even angry dance teachers.

The girls stood completely still, watching Alicia’s every move in the studio mirror, wondering what was going to happen next.

When Alicia finally arrived, Sondra smiled and sighed. “You are like poetry in motion.” She put her lean, muscular arm around Alicia’s shoulders and turned to face the class. “Girls, I want all eyes on Alicia for this last combination. She’s going to lead. Not only does she have a dancer’s attitude, or dare I say, ‘bad-itude’”—Sondra paused briefly and grinned, appreciating her own cleverness—“but she is the only one who seems to fully
get
this routine.” Sondra began clapping, and everyone felt obliged to join her.

Amid the applause, Alicia locked eyes with Olivia and giggled softly. She hadn’t expected this.

Alicia pulled the red elastic band out of her hair and retied her ponytail as tight as she could to show the girls that she was up for the challenge. The hours she had spent practicing at home were about to pay off, and she found herself wishing Massie was there to witness her big moment in the spotlight. Maybe then she’d realize she couldn’t
always
be number one.

“Ah-five, ah-six, ah-five, six, se-vaan, eight,” Alicia called the eight count and led for the entire length of the Black Eyed Peas’ song “Let’s Get It Started,” which was blaring from the stereo. For the next three minutes and thirty-five seconds Alicia understood what it felt like have a roomful of girls copying her every move. She understood what it was like to be Massie Block.

When the song ended, Alicia quickly turned to Sondra and asked, “Can we do that again?”

The exhausted girls let out a collective moan.

“We’re out of time.” Suze Charskey pointed to the clock on the back wall.

“It
is
getting late,” Sondra said to Alicia with a sympathetic grin. “We’ll pick it back up next week.”

“Can I lead again?” Alicia asked quietly while the other girls raced for their bottles of Glaceau mineral water.

Sondra crouched down and popped the CD out of the stereo. She slid it into one of the clear sleeves of her black Case Logic before she answered.

“I should probably give someone else a chance,” she said as she zipped up the case.

“But you said I was good,” Alicia heard herself whine.

“You
were
,” Sondra reassured her as she stood up and slipped into her floor-length baby blue puffy coat. “You’re one of my best.” Sondra waved and said good night as she hurried toward the studio exit, but Alicia couldn’t respond. She wanted to be
the
best.

The other dancers had run to get the only shower with strong water pressure while Alicia just stood there in the dance studio, facing the mirror. At five-foot four, she was taller than a lot of girls in her grade and above average when it came to her big boobs. At school socials or bar mitzvah parties, boys always asked her to dance, and she got e-mails from different guys all the time asking her if she wanted to hang out after school. But she usually turned them down because she had more fun with her best friends: Massie, Kristen, and Dylan.

Being told she looked like a “hotter version of Penelope Cruz with a better nose” used to make her happy. But lately Alicia wanted more. She was tired of being known as Massie Block’s beautiful friend. And today, for the length of an entire song, she’d been “Alicia Rivera: the best dancer in the class.” But now that song was over.

Alicia took a deep breath and rolled her shoulders back before she turned to join the others in the locker room.

Meredith Phillips turned off her hair dryer when she saw Alicia saunter through the door. “You were really on today.”

Alicia peeled off her black Nuala yoga pants, covered herself in a towel, and then wiggled out of her racer back tank top. “You
think?
”

“Beyond,” Meredith said before turning the hair dryer back on. “I wish you could lead every week,” she shouted as she ran a comb through her stringy beige bob.

Forge of Heaven by C. J. Cherryh
Betrayals by Sharon Green
Touchdown Tony Crowne and the Mystery of the Missing Cheerleader by Peter Guy George
The Notorious Scoundrel by Alexandra Benedict
Drama Dolls: A Novel: [Dark, Suspenseful, Fast-paced, Exhilarating] by Tanamor, Jason
His Christmas Match (A Gentleman's Guide to Once Upon a Time) by Charles, Jane
Hellsinger 01 - Fish and Ghosts (P) (MM) by Rhys Ford
Hidden Depths by Holly, Emma
Glitch by Heather Anastasiu
Unhaunting The Hours by Peter Sargent