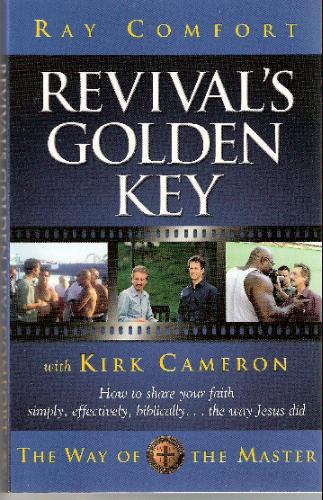 Unlocking the Door to Revival

Woe to you lawyers!
For you have taken away the key of knowledge.
You did not enter in yourselves, and those who were entering in you hindered.

My special thanks to Joe & Walter
Greeman
, Mark Cahill,

3    A Lifestyle
Without
a Life

10
The Motive and the Result

12
The Badge of Authority

16
The Mystery of the Fish

18
A Burden for the Lost

21
Raiders of the
Contents
of the Lost Ark

W
hen I came to Christ at 18 years old, I came as a successful young actor who heard about a God-shaped hole in my heart. I came with the hope that God was real, that He was love, that He would fill that vacuum and make me whole. I invited Jesus into my heart, apologized for my “sinfulness,” and hoped a preacher’s promises of true
peace,
love, joy, and lasting happiness were true.

Thirteen years later, I can honestly say that nothing in all my life compares with the joy of knowing Jesus Christ. But after reading
Revival’s Golden Key,
I fell to my knees in prayer, with brokenness and gratitude. God has used this book to open my eyes and change me forever. This book is foundation-shaking and causing me to inspect not only the way I present the gospel, but my own understanding of the gospel itself.

Revival’s Golden Key
has also shattered my lukewarm concern for my unsaved family and friends. I finally understand why Paul felt “indebted to all men” and “compelled” to share the gospel. I’ve cleared one of my library shelves of all other books except the Bible and
Revival’s Golden Key.

This book—a devastating blow to Satan’s best kept secret—has slipped through Satan’s fingers and landed in your hands. Read with caution. Prepare to be shocked. Its message is powerful and life-changing. My hope is that every Christian will read this book.

May God bless you with a deeper understanding of His truth and His love, and empower you with His own passion to reach the lost.

I noticed that someone had removed a newspaper from the seat pocket in front of me, leaving a small portion of the paper sitting precariously at the top of the seat pocket. I leaned forward, took hold of the two-inch-square piece of paper and mumbled in semi-jest, “Could be a word from the Lord.” As I turned it over, my eyes widened as I read, “I have yet many things to say unto you, but ye cannot bear them now (John 16:12).” I remember being mystified by the words “ye cannot bear them now.”

One year later I went into the deepest, darkest, most frightening experience of my life. It left me so broken, for over a year I couldn’t even muster enough courage to eat a meal with my family. It took five long years to recover from the experience.
1

I now understand what the word “bear” means. In the original it means to “endure, declare, and receive.” That terrible experience left me with a broken spirit. It brought me to a point where I could receive, endure, and declare the many things I had learned. This book is about those “many things.”

W
e live in exciting times. All around us we are seeing signs of the end of the age. Nation is rising against nation. There are wars, earthquakes, famines, and violence. The Jews are back in Jerusalem. The city has become a “burdensome stone” to the nations. Jesus said that iniquity (lawlessness) would abound, and it certainly is. At the same time, we have seen the incredible phenomenon of the rise of
megachurches
with congregations in the tens of thousands. We have heard of
millions
coming to the Savior in Russia, China, and Africa. Pockets of revival have sprung up in the United States and different parts of the world. These
are
exciting times.

With all the excitement, it doesn’t seem that many have noticed a few statistical inconsistencies. In 1996, a survey conducted by the Alan
Guttmacher
Institute in New York found that “eighteen percent of abortion patients describe themselves as born-again or evangelical Christians”
(U.S. News & World Report,
August 19,

1996). That is, of those who murdered their own child, nearly one in five professed faith in Jesus Christ. That is a little difficult to reconcile with the fact that Christians are supposed to love God and to love others as much as they love themselves.

In 1994, the
Barna
Research Group found further evidence that all is not well in the contemporary Church. A survey revealed that one in four American adults who said they were born-again believe Jesus “sinned” while He was on the earth. Think for a moment of the implications of such a theology. Here we have millions of “believers” who supposedly confess that Jesus is Lord, and yet they think He sinned. Therefore, they believe the Bible is inaccurate when it says that Jesus “knew no sin” (2 Corinthians 5:21), that He was “in all points tempted as we are, yet without sin” (Hebrews 4:15), and that He “committed no sin, nor was guile found in His mouth” (1 Peter 2:22). This also means Jesus wasn’t the “spotless” Lamb of God the Scriptures say He was. His sacrifice wasn’t perfect, and when God accepted His death as
an atonement
for our sins, He sanctioned a “contaminated payment” and is therefore corrupt by nature.

One in four American adults who said they were born-again
think
that Jesus “sinned” while He was on the earth.

Sadly, the only logical conclusion to which we may come is that these multitudes who profess faith in Jesus are perhaps strangers to true regeneration.

Some years ago, the
Barna
Research Group revealed that sixty-two percent of Americans claim to have “a relationship with Jesus Christ that is meaningful to them.” Yet a Gallup Poll taken around the same time found that, of those Americans who say they have a relation-ship with the Savior, approximately ten percent were what Gallup called “a breed apart”:

That sounds like
normal
biblical Christianity. That means there is a great mass of people who say that Jesus Christ is meaningful to them, but who are not “a breed apart.” They are not involved in good works, nor are they tolerant of others. Neither are
they involved
in practical Christianity nor committed to prayer.
That means there are millions of people in America who in-sinuate that they belong to Jesus Christ, but whose lives don’t match their claims.
Another Gallup Poll found “very little difference in the behavior of the churched and
unchurched
on a wide range of items including lying, cheating, and stealing.”