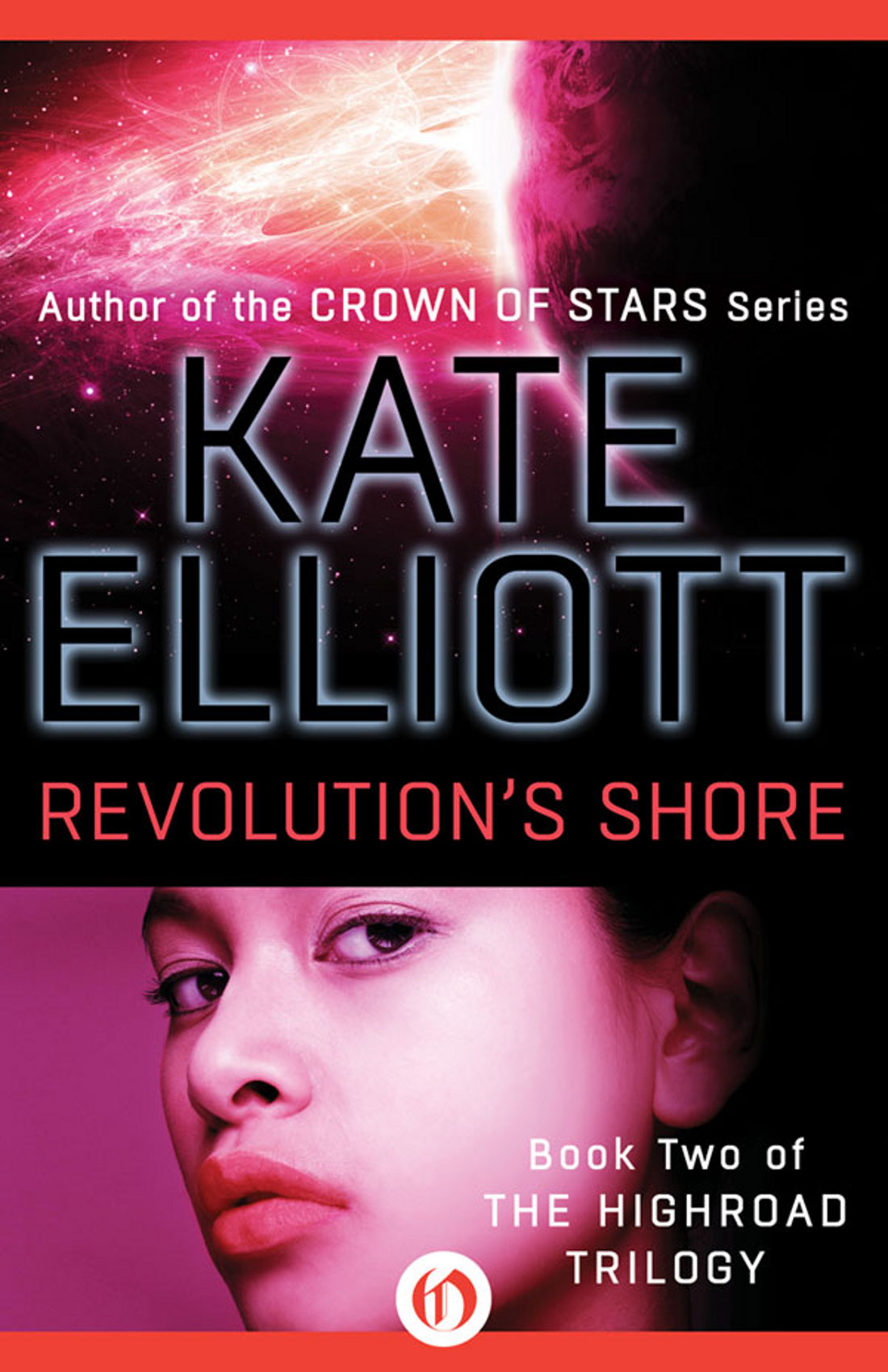 “Elliott's sure-handed and seductive blend of exotic locales, complex interstellar politics, intriguing cultures, realistic romance, and wonderfully realized characters is addictive. I want my next fix!” âJennifer Robertson, author of the Novels of Tiger and Del

“Sweeps the reader along like a wild wind across the steppes. Tell Kate to write fasterâI want to read the whole saga NOW!” âMelanie Rawn, author of the Dragon Prince Trilogy

“[Kate Elliott] spins a splendid web of a tale to trap the unwary and hold them in thrall until the tale is done. Here is another one . . . take care, for if you open these pages you'll be up past dawn.” âDennis McKiernan, author of
Voyage of the Fox Rider

“A new author of considerable talent . . . a rich tapestry of a vibrant society on the brink of epic change.” â
Rave Reviews

“Well-written and gripping. After all, with a solidly drawn alien race, galactic-scale politics, intrigue, warfare, even a crackling love story, all set in a fascinating world that opens out onto a vast view of interstellar history, how could anyone resist?” âKatharine Kerr

For Arnold and Edith Bodtker

16 Aliasing Takes Charge of the Kitchen

21 The Battle for Blessings

Preview: The Price of Ransom

Will ye gang tae the Hielands

Will ye gang tae the Hielands

And I'll tak' the high road

and ye'll tak' the low

And I'll be in the Hielands

O
BSESSIONS ARE DANGEROUS IN
proportion to the amount of fear they breed in their possessors: the closer the possessor to loss of control, the greater the fear.

Kyosti Bitterleaf Hakoni, professionally known as Hawk, had three obsessions. The first was his work as a physician, work denied him for almost twenty-five years but now restored. The second was his lover. But last, and encompassing the first two, he was obsessed with a fear that someday his pastânot even the past people knew him for, the one that had made him and his compatriots both heroes and criminalsâwould catch up with him.

Of course it would. And, of course, in the way he most feared.

But at this moment Hawk sat against the sheen of one wall of his cabin, an arm, half-obscured by the riot of his pale hair, hooked behind his head. With a concentration that directly recalled his namesake, he watched his lover as she slept. His eyes seemed hooded in their intensity, as if he feared that the full force of his stare might obliterate her, flesh and soul.

She did not stir.

He watched her for a long while, silent, and finally a series of chimes, the change of watch, rang through the ship and she shifted beneath the blanket and her eyes opened.

At first she glanced around the room, recalling where she was, but when her gaze found Hawk she relaxed, and yawned and stretched. He watched her.

“Kyosti,” she said when she had finished, “what were we doing when we went through the last window?” Her voice still held the slight hoarseness of awakening, lending it an unwittingly passionate quality.

“That's what I thought. Hoy.” She sat up, her covers slipping off her to reveal the light curve of her skin and the medallionâfive interlinked circles pierced by a spearâthat Heredes had given her. It hung now, just as it always did, just below the hollow of her throat. She shivered, as if the memory of what they had been doing brought her both pleasure and anticipation, and rested her head on her hands, palms covering her eyes. “I could become addicted to that.”

His eyes had not lost their intensity, giving his smile a disturbing blend of amorous warmth and that complete instability brought on by unquenchable thirst. Then she looked up, and his expression changed abruptly to something much more innocuous.

He left, the door sliding to behind him. For an instant his presence still seemed to be with her, and then that feeling dispelled.

“Hoy,” she said again, but with more emphasis, and she lay back down. Above her on the bunk, the intercom buzzed and she reached up to flip it on. “You're through.”

“Lily?” A woman's voice, tight and controlled. “Get up to the bridge. Fast.
Your
pilotâ”

The corridor of the
Easy Virtue
stretched out in dimness before her: evidently Captain Bolyai had chosen to spare as much power as possible. Lily padded double-time to the elevator that gave access to the bridge. She punched an unlit button with one finger and felt the lift shudder and rise beneath her feet. Its low hum sighed to a halt and the door shunted aside to reveal the glare of the bridge.

“âand I don't care if your tupping grandmother was a saint of the Lotus Way, Tobias, you heard the radio trafficâthere's a general alert on in this system and we haven't got the clearances to get past a close check. So sit down at your damned station.”

Jenny Seria stood gripping the tunic of a nondescript man whose chief feature was a grimace of pure hatred directed at the wild tattoos covering the pilot Pinto's face and bare arms. Jenny herself bore a look of disgust tempered by the exasperated glance she cast over her shoulder at Lily's entrance.

“And I told you,” hissed Tobias, “that I won't ship with any cursed tattoo.” As he spoke, Lily noticed that his left eye was beginning to swell, mottled with a deep bruise, and that Captain Bolyai, bearing a harassed look and worried frown at the same time, had a tight but tenuous grip on Pinto's right arm. “I'll rot along with the cursed ghost fleet and all the corpses on Gravewood before I'll touch the same board as that whore's getâ”

Pinto broke free from Bolyai and lunged for Tobias.

Lily met Pinto halfway, bracing herself, and stopped him dead in his tracks. He began to fight against her, realized who she was, and froze into a posture stiff with fury.

“I'll kill him,” Pinto muttered, but despite the rage in his voice he did not attempt to break past Lily.

Lily looked at Captain Bolyai. “Isn't there someone else who can man that station?”

Bolyai shook his head. His eyes examined Lily with the look usually reserved for a once-trusted pet who has brought something truly disgusting in off the streets. “Th'other just went off-shift. Tobias hadn't been up beforeâ”

“Cursed right I hadn't,” began Tobias. “And if you think I'd've stayed on this boat knowing you let such filth aboardâ”

Pinto jerked forward, caught in Lily's grasp, but Tobias responded to the movement by flinging himself gleefully toward Pinto. Only to be thrown hard to the ground by Jenny. The mercenary knelt over him and twisted his arm up behind his back until he cried out in pain.

“Captain!” This from the man at comm. “Military scan. One cruiser, one cutter entering oct quadrant.”

Bolyai flushed. “Put it through.”

For a long space the only sound on the bridge was the crackle of static as
Heart of Lion
waited for a reply, mixed with Tobias's gasping breaths as Jenny let up on his arm.

“Tupping idiot,” she muttered, jerking him up to his feet and shoving him into his chair.

Bolyai went from pale to mottled red as he recovered from the first shock. He took three swift steps to stand behind the navigator's chair. “Get us out of here.” His voice shook.

There was a second moment of silence as all attention focused on the nav chair's occupant. Maned with a glistening crest, the seated sta shook her head and hissed inaudible words to herself as her six-fingered hands tapped calculations into ship's computer. She sighed, like water flowing downhill.

“The last fix I received from the station here leads into a narrow vector. At our present course, our shift would narrow both our velocity window and our angleâno room for error. None.”

The comm came to life again. “This is the
Heart of Lion
. We are under orders to fire on all hostile vessels. We repeat: identify yourselves.”

Pinto tugged at Lily's arm, and she released him. He too went to stand by the nav bank, studying the three-dimensional chart that came up on the screen.

The sta glanced up at him, scale-rimmed eyes blinking once, slowly, before she turned her gaze to Bolyai.

He had by this time broken out in a sweat. “I'll lose my ship,” he whispered.

“I can do it,” Pinto repeated.

“You're not going to let that whore of a tattoo put his filthy hands onâ” Tobias's words cut off as Jenny tightened her grip on him.

“Go,” murmured Bolyai, as if by speaking softly he could negate the responsibility for the command.

“This is the
Heart of Lion
. We will fire if you do notâ”

“And turn that tupping noise off,” shouted Bolyai, gaining strength of purpose in anger.

The sta had already entered the coordinates and began to read out the numbers.

He hesitated, and she drew a pistol, laser light red, from her belt. He began to transfer coordinates through engineering.

For perhaps ten seconds all proceeded in silence. Then the sta's crest raised slightly, and she hissed out a long, nervous breath.

Pinto slipped into the pilot's chair, twisting the stillstrap around his body. “Call them in.” He adjusted the viewers to his eyes.

“We're all dead,” cursed Tobias in an undertone meant to carry across the bridge.

“Shifting vector,” said Pinto. The minute movements of his hands could not be seen under the stillstrap.

A Reason to Live (Marty Singer1) by Iden, Matthew
Secrets of the Fortress 'sorcery' by John Victor
Doll Face by Tim Curran
It Wasn't Always Like This by Joy Preble
Pemberley by Emma Tennant
Me and My Shadows: A Family Memoir by Lorna Luft
Daring Brides by Ava Miles
The Twisted Kiss: Doomsyear, Book 1 by Anya Bast
Infiltrado by Connie Willis
Home for Chirappu by Ariel Tachna