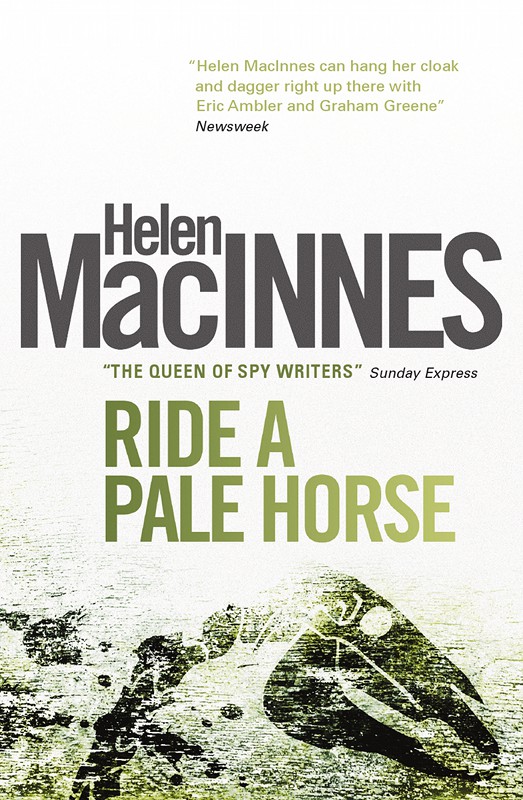 ALSO BY HELEN MacINNES
AND AVAILABLE FROM TITAN BOOKS

Pray for a Brave Heart

While We Still Live

Neither Five Nor Three

Snare of the Hunter 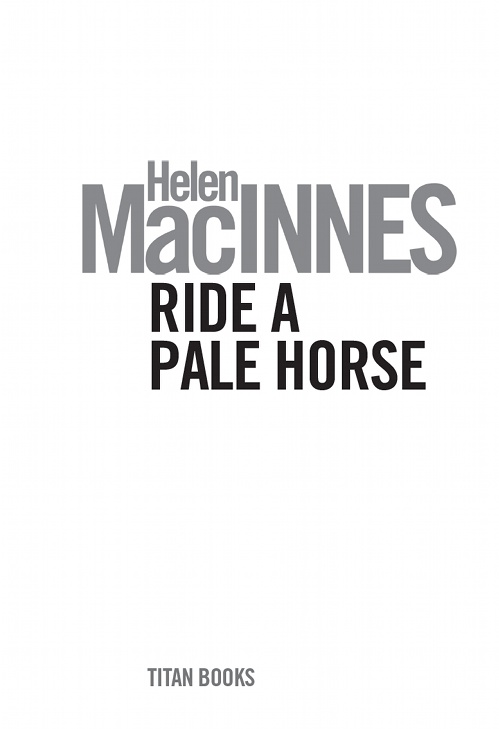 Did you enjoy this book?

We love to hear from our readers. Please email us at:
[email protected]
or write to us at the above address.

In memory of Gilbert

And I looked, and behold a pale horse:

and his name that sat on him was Death,

and Hell followed with him.

The room was comfortable enough, adequate but dull, totally unimaginative, a cream-walled box with everything else coloured brown. Someone in Prague had ordered the essentials—bed, dresser, table, chairs, desk, a small state-controlled radio—straight out of a catalogue. Or perhaps this was the regulation room, repeated one hundred and ten times in this country hotel, judged suitable for foreign guests and the minor Czechoslovak officials who floated around in the background with polite advice and constant guidance.

Karen Cornell stopped pacing over the nine-by-twelve brown carpet, halted at the window. Even its view, showing her a driveway that circled a garden of scarlet geraniums and white begonias before it swept down an avenue through thick woods, did not lift her depression. It only reminded her once more of six days of helpful supervision. For there, drawn close to the hotel entrance, was a neat line of black Fiats, the cars provided for the visiting journalists to see them safely into Prague and back again. Their drivers were linguists, and escorts, too. Once in Prague, they stayed by your side. If you wanted a stroll through the streets, a look at shops and people, they went with you, friendly and obliging. After all, you couldn’t speak Czech, could you? You could get lost so easily, be late for the tight schedule of meetings, lunches, entertainments. But now the escorts, ever dutifully lined up with their cars, did not seem to have much business.

This was the sixth day, when meetings had ended and the only luncheon had been an early farewell downstairs to the eight West Europeans and one American who represented the press of the free world. The Eastern-bloc journalists, forty-eight of them, were probably sleeping off the dumplings (good) and the beer (excellent); they weren’t leaving until tomorrow or the next day. The West Europeans, like this American, were waiting for all the notes they had made to be returned from the censors, worrying while they waited and eyed their watches. Damn all censors, Karen Cornell was thinking as she left the window, didn’t they know we all have planes to catch? It was now almost three o’clock: she was to move out of the hotel by four thirty for her flight to Vienna. She’d pack her bag and stop looking at the desk, where she had expected her notes to be lying in her envelopes once she had escaped from the luncheon. There was nothing, but nothing, in her notes that could possibly rile a censor. Her system of classifying them in envelopes, each with the subject of its contents clearly marked on its top left-hand corner, was simple, time-saving, and invaluable for ready reference. So what was delaying those blasted censors? There were only two or three pages in each envelope; nothing unexpected, nothing exciting had happened at the Prague Convocation for Peace, which she had been covering for four days. (The fifth day was a country jaunt, a visit to a thriving village of farms, planned and supervised by the state, that made a vivid contrast to the inefficiency of another village, where farmers were trying to cling to their pre-1968 ideas of possession.) Convocation for Peace... the usual faces, the usual speeches. All wanted peace, all condemned the United States. A thousand strong in agreement and fervour, except for two West German women who had managed to be included with the Greens and tried to suggest that
all
nuclear weapons should be discarded by
everyone.
Their protest had been drowned out in three minutes, and they were escorted efficiently out of the hall, two small pebbles disappearing into a deep pond with only a little plop to bear witness to their existence.

But, thought Karen, I didn’t put that brief interlude into my notes. I’m carrying it out in my head. And that was the stupidity of censorship. It could black out your written lines, but what about your mind?

Convocation—an impressive word, serious, benevolent, religious almost. And there had been Christians around, mingling with the atheists, quite forgetting that they had been denounced as enemies when religion was declared the opium of the people. Short memories?

So the journalists had been convoked, too, to give their seal of approval. And they came, hoping they could talk with the representatives, but finding as usual that only a few were available for any real discussion. Specially selected, of course: a strong wall of unshakable opinion, fervent, dedicated, against which the Westerners’ arguments made not one crack. But that wasn’t her main assignment here. The special correspondent of the monthly
Washington Spectator,
published and owned by
the
Hubert Schleeman, had been invited for quite another reason. Schleeman had been given the firm impression that there was to be an interview for Karen Lee Cornell with—no less—the President of the Socialist Federated Republic himself.

Schleeman’s contact, the press aide at the Czechoslovak Embassy in Washington, had impressed on him the need for absolute discretion; no talk, no rumours to be circulated about this exceptional opportunity, or other papers and periodicals would be pestering his office. Silence had been kept, secrecy was intact, and Karen had arrived in Prague on an ego trip that floated as high as a helium balloon.

This wasn’t the first of her political interviews: Mitterand last year; Helmut Schmidt on his way out of office; Kohl on his way in. Before that giddy accumulation of names, there had been a seven-year apprenticeship in the art of interviewing. First, a monthly column in the
Spectator
dealing with Washington personalities, foreign as well as home-grown. Next, brief interviews with congressmen; a longer one with a governor; full-length with two congressional committee chairmen, a new justice of the Supreme Court, a top aide at the White House. She had earned her way.

Yes, she reminded herself in mounting bewilderment, dismay, frustration, anger, we kept our word, Schleeman and I. And Jimmy Black, my editor, the only other person to hear about this project, kept his lips tightly buttoned, too. Not one word or whisper from us. Yet the interview fell through. No excuse offered, either; not one word of regret. No interview was possible this week. Or next. Totally impossible at present. Schleeman must have misunderstood.

If so, this was a first for Schleeman. He had never yet misunderstood a quiet invitation from any embassy or even misinterpreted a suggestion. He will be flaming mad. As I am. And I have the additional fear that somehow, some way, the blame for the failure of this assignment will be dumped on me. A remark I made, an attitude I displayed, made them doubt I was a suitable interviewer. That could be the little sound wave travelling back to Schleeman’s quick ear. He wouldn’t believe it. Or would he?

But I’ve been so damned careful, so circumspect. Not like Tony Marcus, the London
Observer’s
man, whose quick tongue was irrepressible. “So,” he had said when they first met, “you’re the spectator and I’m the observer, but I rather think we’ll be only two of the sheep shepherded around.” And when she had smiled discreetly, said nothing, he had added, “Have you noticed the eminently respectable journalists gathered at the West European table? Was that why we have been invited? To legitimise all these bastards?” His amused glance swept around the clusters of the Eastern-bloc newsmen. “Dutiful lot, aren’t they? There was really no need to come here. They don’t have to write anything. They just add a phrase or two to the handouts.” She had smiled again, turned away, pretended to seek out Duvivier of
Le Monde,
whom she had met in Paris last year.

She snapped the locks of her bag. Packing complete. Ready to leave, except for her briefcase, open and waiting for her files to be jammed in when they came back from the censors. You’re a coward, she told herself. Tony Marcus may write an objective column, but he has the courage to be frank when he speaks. You may as well admit it: you wouldn’t be so full of small criticisms and anger today if you had been given that interview yesterday. Your ego is punctured, deflated completely, lying in shreds around your feet. And what about your career? What happens to all your plans if news of this slap-in-the-face gets around. It could, too. There would be plenty who would laugh, and some who would crow with delight. She hadn’t reached this stage in her life without making enemies. Because she was thirty-seven and left them behind, because she was a woman who got the promotions? At first they had said her husband probably wrote her stuff, a successful novelist who knew how to put words together. But she had gone on writing her own material after he had died, more and more sure of her craft. So then success was blamed on her face and figure—she knew how to use them, didn’t she? Did she? Hell, no, she thought: a face and figure added to difficulties. Some people immediately believed you were brainless.

The Rising Dead by Stella Green
The Hidden City by Michelle West
Between You & Me by Marisa Calin
Sent to the Devil by Laura Lebow
Parker's Island by Kimberly Schwartzmiller
A Million Miles Away by Avery,Lara
Not Your Ordinary Housewife: How the man I loved led me into a world I had never imagined by Stern, Nikki
Shadows of Fire by Pierce, Nina
Blood Will Have Blood by Linda Barnes
BadBoysSubBlankEditionHTML by Erika Masten