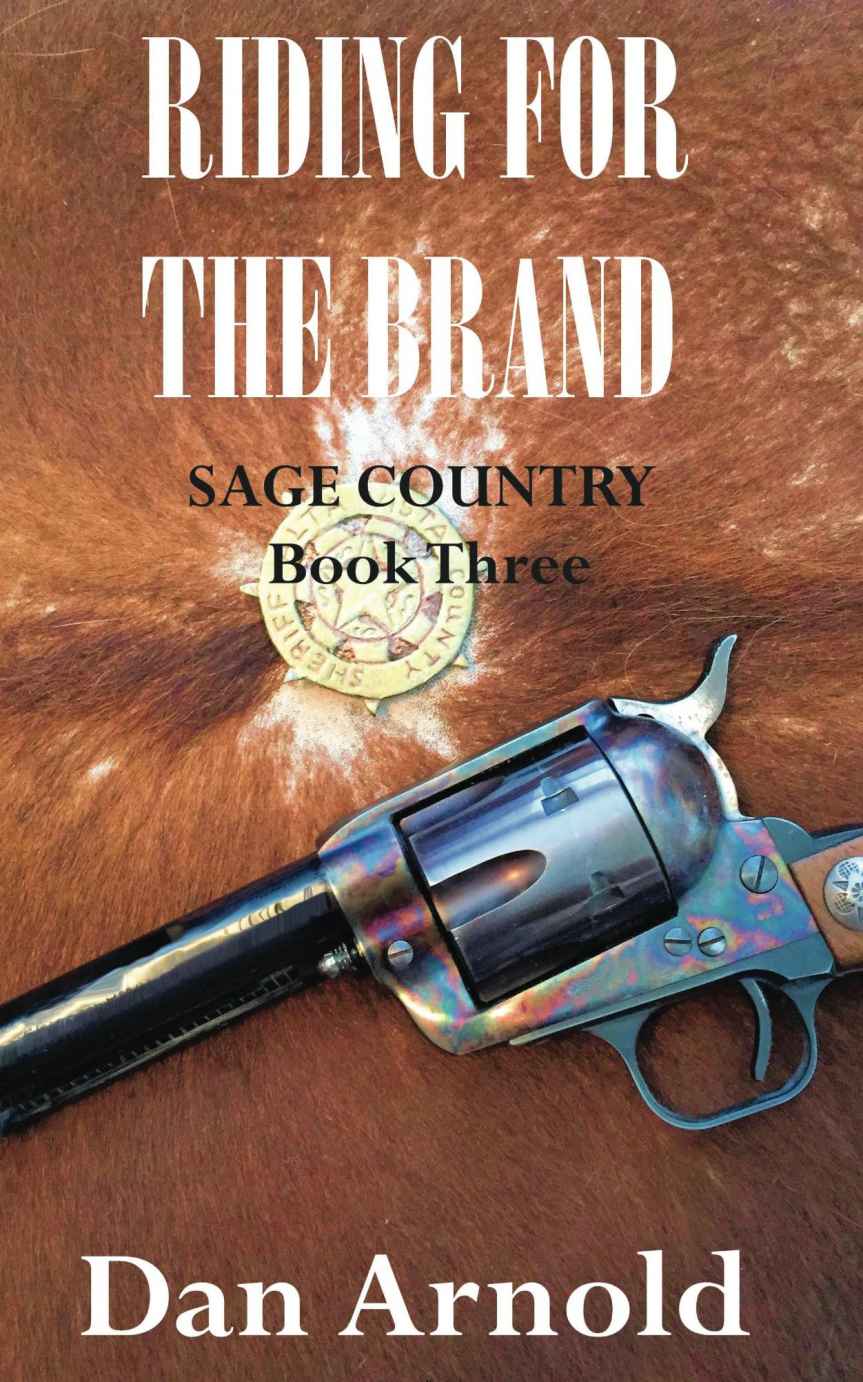 RIDING FOR THE BRAND

This book is a work of fiction. Names, places, characters and incidents are a work of the author’s imagination or are used fictionally. Any resemblance or reference to any actual locales, events or persons, living or dead is entirely fictional.

if you live long enough for them to heal
.

RIDING FOR THE BRAND

Much like that of the samurai who has pledged loyalty and service to his lord, the term “Riding for the brand”, refers to a commitment, a responsibility and a sense of belonging.

Simply stated, to ride for the brand means to be loyal and faithful to the outfit you represent.

My bullet wounds were healing nicely. At least the physical wounds were. I’d regained most of my strength and range of motion, but I was reliving some of the recent events in my dreams. Not really reliving them, but some distorted dream version of those events filled with dread and anxiety. I would wake Lora as I thrashed about, or even cried out in my sleep Sometimes I’d wake up reaching for my gun, or covered in a cold sweat.

Lora would hold me and soothe me like a small child, until I went back to sleep.

“This is no way for a man, let alone a lawman, to act. What’s the matter with me?”
I thought.
“I’ve been shot before, and didn’t have these problems. Maybe I’m no good anymore.”

After a couple of weeks of misery, I finally admitted those thoughts to Lora. We were sitting on the porch, watching the kids playing in the yard.

“John, from what you’ve told me, your nightmares aren’t really about you. You’re concerned for our safety, me, Sarah and Jacob. You’re feeling overwhelmed and vulnerable. It’s not surprising. That horrible man walked into our bedroom and caught you naked and unarmed. You nearly died trying to protect me and the children. Anyone would be shaken up. I think about it too…sometimes.”

I took a deep breath.

“Maybe, but what am I going to do about it?”

“Time heals all wounds,” she quoted.

“Well, I reckon so, but how much time? I don’t even want to leave the house. I’m afraid to be away from you and the children. At the same time, I need to get back to work. I know people are starting to talk.”

“People have been talking about you since the first day you came to Bear Creek. Some people love you, some people hate you, and some people don’t care one way or the other, but everybody talks. Those that hate you will try to take advantage of this situation and use it against you. They don’t matter.

You matter. You matter to me and everyone in Alta Vista County. You matter to the children. Forget about the haters and focus on who you are, and what you do best.”

“What I do best, is law enforcement.”

Lora smiled and batted her eyes at me.

It was the first time I could remember laughing, since being shot.

“I got a letter today from Mildred. She and Bud are coming back to Bear Creek, the end of next week,” Lora said, changing the subject.

Bud was the pastor of our church and Mildred was his wife. They’d been gone for more than a month, called back east for a family emergency.

“That’s good news. It will help get some things back to normal.”

Lora was studying me.

“Do you remember when we were first engaged?” She asked.

“Do you remember how I almost called off the engagement?”

“Do you remember why?”

I nodded slowly. I was beginning to get her drift.

“You were afraid something would happen to me, and you would be left alone.”

“Do you remember what you told me?”

“I said fear and faith couldn’t co-exist, I said they were like oil and water…”

Lora cupped my face in her hands and locked her eyes on mine.

“You were right, John. Faith and fear are complete opposites. I choose faith. I choose to believe God knows what He’s doing. I have faith in Him, and I have faith in you.” She kissed me. “And that’s why I believe you’re going to be just fine.”

She stood up and smoothed out her dress. “Now, let’s go play with the children.”

Just before we were married, I found two kids, Jacob and Sarah, hiding in the livery stable. Sarah was four and Jacob was six. They’d walked barefoot, more than fifteen miles to Bear Creek, all alone. When I found them they’d been hiding in the barn at the livery stable for more than a week. Lora insisted they come live with us. At first they couldn’t or wouldn’t speak, but Lora had them eating out of her hand within days. We learned both of their parents were dead. Someone had killed their father, and their mother died of some sickness not long after.

We played with a wagon wheel rim and a stick for a while. Sarah was becoming more coordinated with the toy and could keep it up and moving now, but she still ran over things with it, or tripped on her skirts and used the opportunity to seek solace in the arms of Lora. Eventually, Lora went in to see about supper with Sarah following along right behind her.

I sat on the fence with Jacob, watching the carriage horses grazing in the pasture.

“Did you have horses at your place?” I asked.

“Sure, my pa had a big old brown horse with a white face. His name was Shongaloo. Pa rode him most of the time. We had a couple of giant horses to plow and pull the big wagon. We had a big wagon and a buckboard. We had other horses for the ranch too.”

He and Sarah were becoming much more comfortable talking about their parents now. It had been a process over the weeks, but they were getting a little more open every day.

“I know you told me you had a milk cow. Did you have any other cattle?”

“A whole bunch, I don’t know how many. My pa called it a herd. There was a big roundup every year where all the ranches caught all the cows on the range and counted them. Sometimes, other cowboys would help my dad round them up and do branding and such. I got to go out to the roundup a couple of times with Sarah and our Ma. It was noisy and messy but kind of fun. Burning hair stinks.”

He was starting to look a little wistful, so I changed the subject.

“Do you think I should bring Dusty down here from the livery stable?” I was referring to my buckskin horse.

“I think he likes living at the livery stable. It’s pretty close to the courthouse, so I still see him every day, but I would rather have him here.”

“If he was here, could I ride on him sometimes?” Jacob asked.

“Well then, you’d probably better bring him on down here, huh?”

“You might be right, Jacob.” I said, giving his hair a scrub with my hand. “You told me you lived near Yellow Butte. How close was it?”

“I mean, could you see it from your house?”

“Course,” he responded. He made a face indicating he had some concern about my intellect.

“You said you’d been up on the butte with your dad. Did it take a long time to get up there?”

I tried a different approach.

“When you were up on Yellow Butte, could you see your house from way up there?

“Yep, right down below us. I was going to chunk a rock, but my pa said not to.”

Now I had a much better idea about where they’d lived. I had the beginning of a plan forming in my mind.

“You know, we could play some baseball till supper time,” I suggested.

Jacob smacked me on the leg as he jumped down from the fence.

“Tag, you’re it” he called, racing away.

Down at the edge of Bear Creek, Lora and the children were having a fun time. From my vantage point in the dappled shade under a cottonwood tree, I was watching them splash water at each other, laughing and playing. I was delighted by their joy.

Looking toward the nearby hilltop, I saw a lone Comanche sitting on his pony. I wasn’t disturbed seeing him, because I was pretty sure he was my friend, Yellow Horse. If it was Yellow Horse, I’d be glad to see him. With the sun behind him, I couldn’t clearly distinguish his face. Other men on horseback began to appear at the top of the hill, riding up from the far side. I felt uneasy.

There was something dark and menacing about these men whose shadows stretched out before them as they started riding down toward us.

Lora and the children had become silent. When I glanced toward them, they were looking up the hill at the approaching men on horseback. Those riders began to trot, then gallop down the hill.

They were close enough now I recognized them, but it couldn’t be. These charging horsemen were all men I’d killed!

I called out to Lora, trying to warn her. She and the children were walking back toward where I was now standing out in the open meadow.

The riders were barreling down on them. I reached for my gun, but found myself standing in my long johns−undressed and unarmed. I felt frozen in place as the dead riders overtook Lora and the children.

Heven & Hell Anthology (Heven and Hell) by Cambria Hebert
Ballet Shoes and Engine Grease by Tatiana March
Soul Bonded by Malone, Meghan
Sleepwalker by Karen Robards
Northmen: The Viking Saga AD 793-1241 by John Haywood
Entrelacen by Morales, Dani
The Bond That Heals Us by Christine D'Abo
The Masada Complex by Azrieli, Avraham
The French Retreat (Falling for France Book 1) by Fortin, Sue
One Kiss: An Apocalyptic Urban Fantasy (Transmissions from The International Council for the Exploration of the Universe., #1) by E.J Kimelman, Emily Kimelman