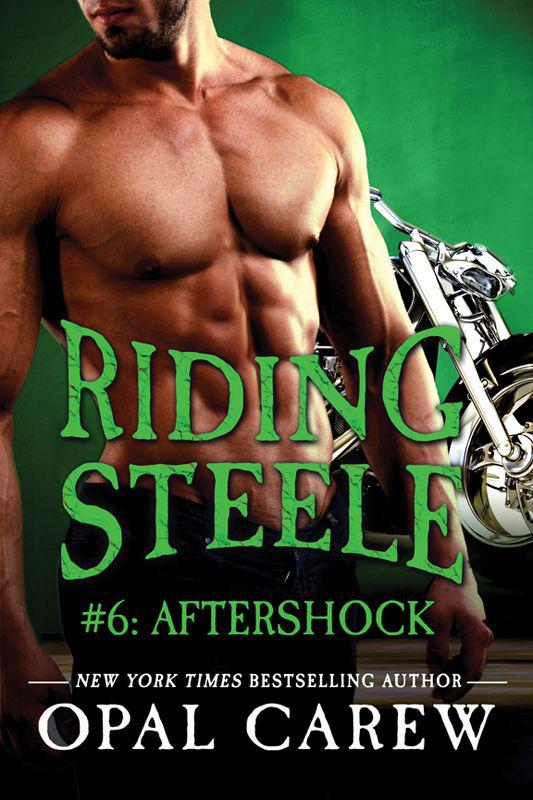 The author and publisher have provided this e-book to you for your personal use only. You may not make this e-book publicly available in any way.
Copyright infringement is against the law. If you believe the copy of this e-book you are reading infringes on the author’s copyright, please notify the publisher at:
http://us.macmillanusa.com/piracy
.

More from the Riding Steele Series

“Is everything okay?” Laurie asked, concern in her eyes. “Do you think they found Donovan and he’s convinced them to come after us?”

Steele placed his hands on her shoulders and locked gazes with her. “He hurt you, remember? You have nothing to be afraid of.”

Steele glanced toward Rip, who had paced several yards away and was speaking intently on the phone.

Rip slipped his phone into his pocket and walked toward Steele, his expression grim. Laurie reached for Steele’s hand and he enveloped it in his.

Rip glanced at Laurie, then back to Steele. “They found Donovan a few hours ago at his house. He was dead.”

Laurie sucked in a breath and Steele squeezed her hand.

Rip gazed at Laurie again. “And the police are looking for you.” His lips compressed in a tight line. “You’re wanted for questioning.”

Laurie felt faint. She clung to Steele’s hands as the blood rushed from her face.

“I can’t believe this. Are they sure? How could he be dead?” she asked.

“Killer said to hang tight and he’ll fill us in on the details when he gets back to us.” Rip grasped her shoulder and squeezed. “But, I’m sorry, Donovan is definitely dead.”

“So this means the police are coming here for me?” she said weakly, her hand trembling.

“You’re white as a ghost,” Steele said, gazing at her. “Let’s get you inside.”

He led her into their room and the others followed. She sat on the bed and Steele sat beside her while the others gathered around, looking somber.

“Laurie, you didn’t do anything wrong,” Rip said. “It’s going to be all right.”

She glanced at Steele, remembering his fist hammering into Donovan’s face. Oh, God, was that why he’d died? Because Steele had beat him and then they’d left him in that cage? Had he died from injuries inflicted by Steele? If they had called someone sooner, would Donovan still be alive?

The thought sent a shock wave through her.

She’d hated Donovan. She hated what he’d done to her. She hated how cruel he’d been. And he’d terrified her. Just knowing he was out there had kept her in fear.

But knowing he was dead, and that Steele might have something to do with it, left her feeling numb.

“I don’t know what to tell them. I don’t know …” She was shaking her head and realized it was all too much. She felt weak and scared and … traumatized.

Rip sat on the other side of her.

“You’ll just tell them the truth. That the guy kidnapped you … terrorized you … then we showed up and pulled you out of there.”

“But won’t they charge you with breaking and entering? What about the fact that …” She gazed at Steele, then back to Rip and continued hesitantly. “Donovan was beaten up. What if that’s why he died? What if they charge …” She shot a quick glance to Steele again, then bit her lip.

His face clouded and she realized as much as he hated Donovan, he didn’t want to be responsible for his death.

She squeezed his hand. “You were saving me. You were reacting to what he did to me. You didn’t mean to …”

“Let’s just all keep calm,” Shock said. “Rip said Killer is going to call us back. Let’s not get worked up about what might happen. We’ll face whatever we have to when the time comes.”

“That’s good advice,” Rip agreed. “Steele, you went out to get food, right?”

“Okay, let’s all just eat and relax. Killer should get back to us soon.” Rip stood up and headed for the door.

Dom went with him and they returned a few minutes later with a brown paper bag and the case of beer the guys had been sharing outside. Dom opened a bottle and handed it to Laurie. She took a sip, then just stared at the burger Rip placed in her hand. Her stomach growled at the smell of food, so she unwrapped the paper around it, but after one bite, put it down beside her.

Silence hung in the air as everyone ate. Steele encouraged her to eat a little more and she finished about half, then gave up. It tasted like sawdust in her mouth.

“Hey, this place has a pool,” Raven said. “Why don’t we be real badasses and go swimming even though we’ve just eaten?” She grinned.

It was a warm day, and the thought of relaxing in the sparkling water had its appeal, but Laurie shook her head.

Raven looked hesitant, then put her hand on Laurie’s. “I’m just trying to get your mind off all this, since there’s nothing we can do right now.”

Laurie took a deep breath. “Thanks, Raven, but I’m just not up to it.”

“It’s okay. I’ll stay with her,” Steele said. “Rip, just leave the phone with me in case Killer calls.”

“You got it.” Rip stood up and pulled the cell from his pocket and handed it to Steele. “The pool’s just around the corner of the building, so if you need us, let us know.”

Steele nodded and they all filed out and Dom, the last one out, closed the door behind them.

Laurie turned to Steele and rested her hand on his cheek. “Oh, Steele, I’m so sorry I got you into this mess.”

“It wasn’t your fault. You were a victim in all this.”

She shook her head. “No. I chose to go out with him. I made the mistake of not seeing Donovan for what he really was. You tried to protect me and now you and your crew are pulled into this whole thing.”

“Don’t worry about us. You’ve been through a terrible ordeal. It’s you I’m concerned about.” He wrapped his arms around her and pulled her close. “I’d do anything to protect you. Anything.”

She rested her head against his chest, listening to his heartbeat. Letting the steady rhythm and the feel of his strong arms holding her tight, calm her. She could drift into sleep right here in his arms. Just let her cares slip away and surrender to unconsciousness.

He stroked her hair and she tightened her arms around his waist. They sat there quietly, just holding each other. In the distance she could hear the others splashing in the pool. She closed her eyes and just let her thoughts go. Surrendering to nothingness.

The cell phone rang, and she jumped.

Steele pulled the phone from his pocket.

“Steele here.” He gazed at her grimly. “Yeah, we’ve been waiting for your call.”

She heard the rhythm of the voice on the line, but not the words.

Steele answered questions, explaining what had happened. He glanced at her a few times.

“Yeah, she’s pretty shaken up, but physically okay. Except for a few cuts and a twisted ankle.”

She shifted beside him.

“No, we haven’t taken her to a doctor. It doesn’t seem to be broken, but it is swollen.”

Steele gave a few more details about the attack, telling him about the cage and admitting that he had hit Donovan.

“He was in the cage when we left him.”

After a few more minutes, he hung up.

“He said we should just stay put and hold off on going to a doctor for your ankle right now, unless it’s really bad. He wants to save you the stress of being picked up until he knows more.”

“My ankle’s fine,” she said. It hurt when she walked and the swelling made it uncomfortable, but she could live with that.

Steele insisted she lay back and put it up, then he fetched ice in a plastic bag, wrapped it in a towel and arranged it on her ankle. When the others returned about a half hour later, Steele wrapped her ankle in a bandage he’d bought when he’d gone to get the burgers earlier and they filled up the time playing cards and drinking.

After ordering a late dinner of pizza, they all returned to their rooms to get some sleep.

Laurie felt the blackness closing in on her, stifling her breathing. A hand clutched her throat, choking her. She tried to flee, but she couldn’t move. Her hands were restrained. She murmured, unable to scream, fear exploding through her.

She tried to kick, but her legs wouldn’t move. Panic blazed through her.

Her eyelids popped open. Darkness surrounded her. A body was pressed against her. Big and hard. A man’s strong arms were wrapped around her.

Oh, God, Donovan. Memories of the cage he’d locked her in flashed through her brain. Fear and anguish gripped her.

She lurched forward, scrambling from his hold, and scurried through the darkness. She didn’t know where she was. But her ankle buckled and she fell to the floor.

The light snapped on and she rolled onto her butt, then pushed herself backward with her one good foot and her hands, but found herself trapped in a corner of the room.

“Laurie, what the hell?” Steele was still half asleep, but at the sight of Laurie on the ground panting, he became fully alert. He pushed himself from the bed and walked toward her slowly.

She cowered in the corner, like a trapped animal, her eyes glazed in fear.

He crouched on the floor, still several feet away. “It’s okay, baby. Did you have a nightmare?”

Her gaze darted back and forth as she sucked in deep breaths. Did she even recognize him?

She focused on him, her eyes wide, and seemed to relax a little.

Then tears welled in her eyes and flowed down her cheeks. His heart clenched at the sight.

He sat down on the floor. “It’s okay. Just take it slowly.”

The words tumbled from her mouth in a rapid flow, punctuated by shallow breaths.

He wanted to pull her into his arms and comfort her, but he didn’t want to approach her. All he could do was be here for her and wait for her to come to him.

She sucked in a few more breaths, then her gaze turned to his. “It was real, wasn’t it? It wasn’t just a nightmare.”

She started to tremble. She pulled her knees close and wrapped her arms around herself.

He moved closer. She stiffened a little so he stopped.

Blissful volume 3 (New Adult Romance) by Wild, Clarissa
Home Is Where the Bark Is by Kandy Shepherd
Dangerous Curves Ahead (Watchers Crew) by Ines Johnson
the Outlaws Of Mesquite (Ss) (1990) by L'amour, Louis
That Old Flame of Mine by J. J. Cook
The Psychoactive Café by Paula Cartwright
No Country for Old Men by Cormac McCarthy
The Angry Wife by Pearl S. Buck
Judy Moody Está De Mal Humor, De Muy Mal Humor by Megan McDonald
Twixt Firelight and Water by Juliet Marillier