Rise Of The Dragon King (Book 5) 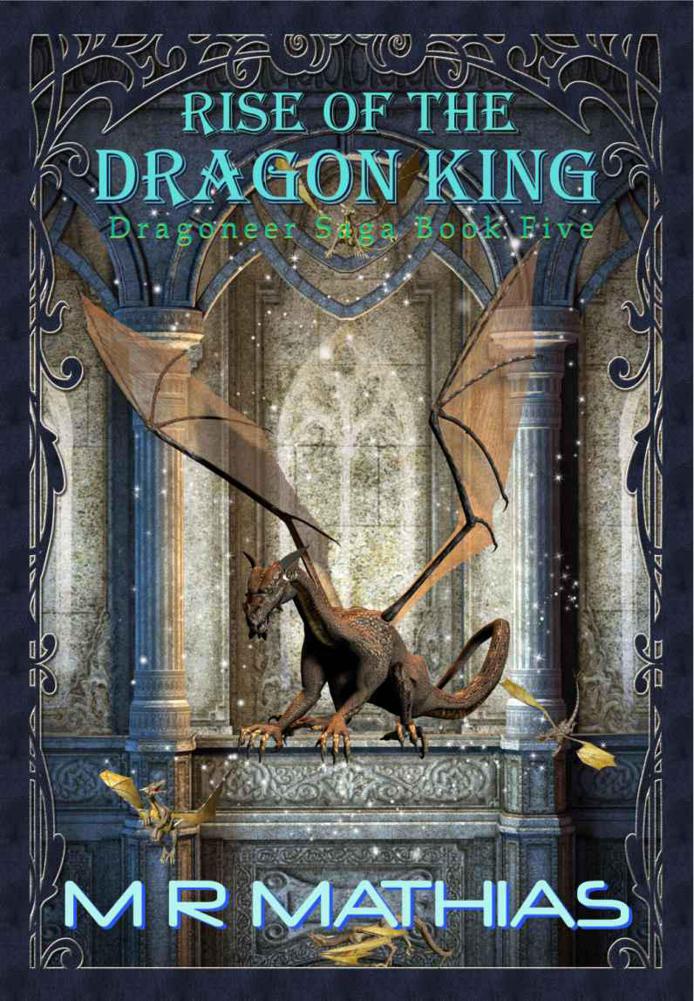 For Michelle Kinnamon who makes my life better every day she is with me.

PART I: THE BANISHED KING

PART IV: “NEVER UNDERESTIMATE A WIZARD. ANY WIZARD. EVER.” - CLOVER

AUTHOR’S NOTE ABOUT THE TIMELINE OF THIS STORY:

T
he banished king had been left on the small landmass known as Serpent’s Isle for eight years, so far. Richard, still King Richard in his own mind’s eye, or Prince Richard, depending on what era his memory was caught up in, had gone somewhat mad in that time, but the sound he was hearing now was no hopeful delusion. A bell was ringing as plainly as the calls of the gulls and pelicans it was irritating.

Having spent a good deal of his time just lying there and listening, he knew the noise wasn’t coming from anywhere on the island. In fact, over the course of his first two years there, he had literally turned over every stone and investigated every crevice, crack and cavern at least a dozen times. There was nothing here that could make such an unnatural ding over and over again. Nothing.

The bell, and the steady repetition of its ringing, had a purpose and a meaning, but he had long since forgotten the few rules of seamanship he’d known. His Nightshade had spent the first few months here with him, but then one day it had slid into the sea, and he hadn’t seen it since. After that happened,
he stopped thinking like a man and began surviving.

The realization that it was a ship’s bell he was hearing, and then the more specific recollection that it was the bell mounted at the front of a longboat, caused him to sit up. Each year, just before the cold set in, a sizeable bundle of stores and other necessities had been left on the beach. Maybe he was getting more? Maybe there was a message?

Long before he’d arrived, Rikky and Zahrellion had fought and killed a terrible serpent here. Some of its bones, and the upper part of its skull, decorated his cave. The two Dragoneers had come to get an antidote to save his life. He was once a Dragoneer, too, and he’d helped save the whole realm. He and his dragon, Royal, had been the best of them.

The sound of the bell brought him out of his jumbled thoughts.

He was suddenly very excited. The previous bundles had been left by dragon, he was sure, for there were no marks on the beach around them at all. They had been dropped in the night. More, though, winter wasn’t about to set in. In fact, spring was just getting started, and he still had most of the storables from the previous package put away.

It was possible they were coming to get him, but even as the thought, and the flood of hope it brought with it, assailed him, his subconscious mind began
revealing other, less savory possibilities. After just a few seconds, he then realized there was nothing worse that could happen to him. No words could faze him, unless it was the news that he was leaving this place.

He was disappointed when he came hurrying out of the cavern he now called home. The fog was so thick, he couldn’t see the hand at the end of his arm.

The sailors were using the bell, and its echo, to gauge the shoreline.

Knowing that when the air was saturated with moisture this way he would have to get above the mist to see anything, he started climbing up to the island’s peak. There, he had long since rigged the thickest tree with ladder steps made from wood he’d salvaged from the broken ship in the bay. He also had a mirrored lantern and a hand-carved whistle up there, for he had seen three ships in his time here and had gotten more prepared to hail one with each passing.

He struggled up a rocky face that was slick with moisture from the mist, but once atop it, he stopped still, relaxed his posture, and started scratching his filthy head. This led to more scratching, and like a wild animal trying to rid itself of a flea, he ended up lying down and grinding his back and shoulders against the rocks until he rid himself of the irritation.

“Why don’t I just hail them now?” he asked himself out loud as he stood. “We’ve got nothing to lose by revealing ourselves, have we, Royal?”

As it often did, Richard’s broken mind took him away, back to a time in his youth when magic and wonder still had a place in his heart. A time before Gravelbone’s corruption had infected him. A time when he was Crown Prince of the only kingdom, and a dragon named Royal loved him dearly.

“He mustn’t know, boy,” Mysterian the witch hissed, eyes wide. Even though she was deathly serious, Prince Richard’s excitement was so contagious, it was clear she was feeling it, too.

He was seventeen years old and had just taken his first flight with the magnificent blue dragon called Royal. They were standing in the garden bailey, surrounded by lush greenery that was punctuated with stark, lime-colored, four-petal flowers the size of a man’s palm. The predominant smell of brine was overcome here, and Richard’s nostrils recalled well the sweet citrus scent of the blooms.

He remembered it was a miracle they didn’t get spotted by his father’s Wallguard that night. Royal had glided right over them before dropping and landing like a sprawled cat in the garden. Richard also remembered how it felt after the huge wyrm had gone, when Mysterian twisted his ear until the giddiness
was out of him.

“If you get caught, that dragon won’t get scolded, boy.” She forced the urgency of the message through her teeth. “They’ll chain him to the earth and take his head off with axes. Do you want that?”

Richard remembered being angry that she hadn’t believed he already understood. He knew his father could never know. Hadn’t he and the dragon kept their previous meetings secret? For nothing more than caution, Mysterian had taken the glory of his first dragon flight from him. It was only one of the reasons he hated her.

Thinking of Royal allowed him to easily dismiss Mysterian, and he was in the woods on the far side of King’s Isle again, meeting his wyrm for the very first time.

The feeling was all fear. There was exhilaration later, but when he first saw the deep-blue-scaled dragon’s head lying there on the forest floor, he nearly filled his britches.

An eye the size of a dinner plate blinked, and the wyrm’s sword-like, slitted pupil shrank to a sliver as it focused on him.

“I have,” Richard managed. Standing in the presence of a beast that could
swallow him whole left him fully in awe.

We have a grimss future, youss and I. I am Royal, and youss are royalty
. The dragon somehow filled his head with glorious thoughts.
But until we meet our endsss, we shalls live
.

And they did. They were forced to take their flights over sea, for the most part, but after Richard became proficient on Royal’s back, the wizened wyrm took them all over the Mainland.

These jaunts were only possible because of Mysterian, who used her witchy ways to make sure their absences didn’t seem suspicious. Richard wished his memories of her were fonder, for she thought she was looking out for him and the witches’ prophecy. Ultimately, she was only hiding the truth from them all.

Those early years were tough on Richard. He was often forced to choose between the dragon’s beliefs and his father’s, and no matter what he did, he had to keep the dragon’s existence a secret. That was no easy task, and at that time, Richard had no idea that Royal’s hatchmate had been the wyrm that maimed his gran in the arena pit. He never got a sense of how much his father, and the people of the kingdom, hated dragons until later. Looking back, he understood Mysterian’s caution, but he hated her no less for all her deceit.

The Sea Came in at Midnight by Erickson, Steve
Probation by Tom Mendicino
Blood Trail by J. R. Roberts
Hitler’s Pre-Emptive War: The Battle for Norway, 1940 by Henrik O. Lunde
Blue Thirst by Lawrence Durrell
Will You Be My Friend? by P.J. Night
Mike Mulligan and His Steam Shovel by Virginia Lee Burton
The Wrong Man by Jason Dean
Edge of Time by Susan M. MacDonald
Killer Cannoli (A Terrified Detective Mystery Book 2) by Carole Fowkes