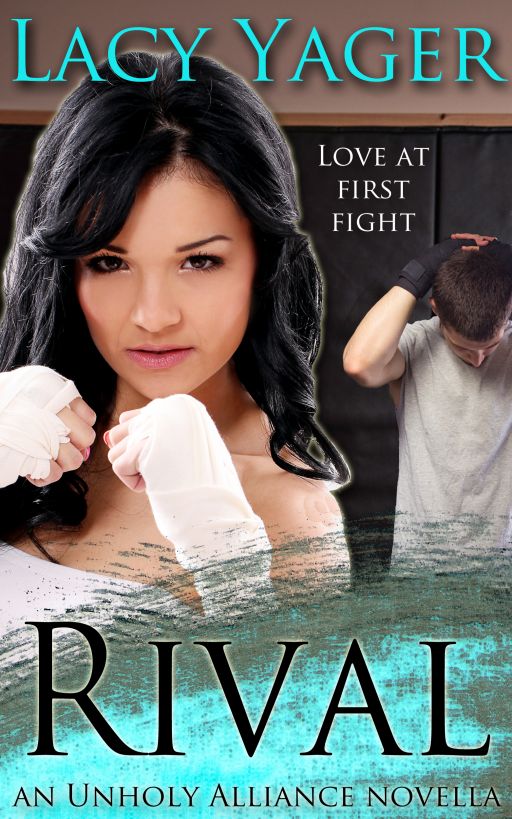 Her destiny. His
determination.

Born a fifth generation vampire Chaser,
seventeen-year-old Emily Santos wants nothing more than to join the
family business. But Emily's mother refuses, so Emily must channel
her aggression into her martial arts training.

Black belt senior Brett Carson has
decided it's time to rid himself of his unrequited feelings for
Emily. But when he finds himself in the middle of an altercation
with Emily and a gang of vampires, he is drawn into a world he
never expected. And Brett is hiding a secret of his
own...

My sneakers hit the pavement and my
heart slams like the truck door behind me.

"Watch it!" My cousin and best friend
Erick hops out of the drivers' side, reprimanding me at the same
time. Sensitive about his truck.

The dim, enclosed parking garage puts
me on edge. It's a perfect place for vampires. But it's early
afternoon, not their prime hunting time.

The upscale Austin, Texas, mall parking
lot is packed with sedans and trucks.

I sling a motorcycle helmet into the
bed of the truck, where it joins the massive four-wheeler we just
spent an exhilarating morning breaking in. A gift for his
eighteenth birthday a couple of months ago.

For my eighteenth, I'm getting a night
of torture. Mom-style.

"I can't believe you're making me do
this." Erick stuffs his hands in his pockets as we walk toward the
mall entrance.

His jeans and t-shirt are
mud-splattered, and when I look down, mine haven't fared any
better. I run a hand over my hair and discover most of it has come
loose from the long braid down my back.

Thank goodness
she
isn't here to see.
And Sunday afternoon traffic at the mall is light.

"I can't believe
my mom
is making me do
this," I grumble.

He's heard it all before, how I can't
stand the thought of going through a cotillion, a big debutante
ball to-do for my birthday party. I'd rather be focusing on my
martial arts, but my mom insists. Until I turn eighteen, I have to
bow to her wishes, including not fighting.

But on Sunday, the day after my
birthday, I'll be hunting.

For today, Erick and I have to pick out
my dress. I think mom knew better than to join me. Ending up in a
blowout fight in such a public place would probably ruin her rep
with her ritzy friends.

"Let's get this over with." Surely it
won't take long to find something gaudy enough for my
mother.

Twenty minutes later, I'm staring at
myself in the mirrors surrounding me, the horror I feel reflected
on my face. In triplicate.

"It doesn't fit right. Just like all
the rest." This is the fifth one.

I know why, even if Erick and the sales
lady helping us are too polite to say anything. I'm too flat up
top, too tall, and too skinny to pull off any of these formal
gowns.

On the other hand, the
gowns with strapless or spaghetti straps show off my biceps nicely.
Too bad I can't have a
kama
—a traditional Filipino weapon,
looks like a scythe—as an accessory. But my mom seems to want to
forget the weapons part of our family tradition and focus only on
this big party.

"Maybe something knee-length..." the
sales lady murmurs, hurrying away from the dressing
room.

Take me with you!
I shout silently.

Behind me in the mirror, Erick plays on
his smartphone.

I snap my fingers and he looks up; our
eyes meet in the mirror. "Is it too much to ask for you to actually
look at the dresses?"

He shrugs. "I'm not a chick. You
should've asked a girl along if you wanted a commentary on color
and frills."

But he knows I don't have
any real girlfriends, so I'm not surprised when he puts the phone
down next to his thigh and leans forward on his elbows. "It's
not
that
bad."

I snort at his blatant lie.

He crosses his eyes in the mirror at
me.

I stick my tongue out, and it's almost
like we're in sixth grade again. Back when everything was easy.
Back when my dad was alive.

"I wish I were your sister."

He rolls his eyes. "If you think my dad
would let you out of having a debutante, you're crazy."

Our eyes meet again in the mirror,
serious this time. It's something that's always there in the back
of our minds... the vampires we were born to destroy.

My mom married into a Chaser family,
but I don't think she really understood what it meant until after
my dad died. In our branch of the family tree, I'm the only one who
can carry on the legacy. I can't just let it die, not when it's
something I've been born to do. Someone has to step up and protect
the humans.

Even if it means she and I part ways
after this shindig. I haven't exactly told her my plan,
though.

"Try this one." The sales lady bustles
back into the dressing area and shoves a pile of magenta fabric
into my arms. She pushes me off the carpeted block in front of the
mirrors toward the changing rooms.

I'm pulling the dress over my head,
wobbling in the unfamiliar high heels the saleslady forced on me
earlier, when I hear another male voice join Erick's outside the
curtain. I don’t pay much attention to it. It’s probably another
guy here to help his girlfriend find a prom dress. Acting the
contortionist to zip the side zipper takes enough concentration.
This dress feels like it hugs in all the right places, but there
isn't a mirror in this closet-like space, so I push aside the
curtain…

And freeze on the threshold.

Erick isn't alone, and the guy with him
is possibly the last person on earth I want to see.

An irrational burst of heat fills my
neck and cheeks as Brett's bright blue eyes lock on mine. His shock
of short brown hair is as unwelcome as the rest of him. His usual
cowboy hat is missing, though the boots are there beneath his
jeans.

He wolf whistles and curses softly as
his gaze travels the length of my body.

"What are you doing here?" I bark,
because I'm pretty sure he's mocking me. I don't trust anything
about Brett, not since his betrayal two years ago.

Trying to ignore the hot feeling of his
gaze, I march to the block and hop up, examining every minute
detail of the dress.

"I was in the neighborhood," he
says.

Over my shoulder in the mirror, I see a
flash of white teeth against his tanned skin, but I don't respond
to his remark.

Erick is suspiciously silent. If my
cousin had anything to do with Brett showing up, I'll beat it out
of him later.

The sales clerk moves close and tugs at
my bodice. "This one fits much better, dear. Makes it look like
you've got something up here after all."

The heat in my face intensifies. I
don't have any illusions about my attractiveness to the opposite
sex, not with my build, but she didn't have to point that out in
front of Brett, did she?

"And it makes your legs look
great."

My eyes dart to Brett's in the mirror
and our gazes collide. Did he really just say that?

Erick clears his throat and I blink,
breaking the connection, but the sudden roiling in my stomach
remains.

"Can we get it and go?" my cousin
mutters, shifting his feet.

The sales clerk motions me to turn
around. "Lift your arms, dear. There's a bit of extra fabric
here..." She pinches a fingerful of purple beneath my armpits.
"We've got a seamstress on staff who can fix this for you in a
couple of days. It'll be a perfect fit."

"That's fine. Thanks," I grudgingly
say, because it isn't her fault I've got to have the
dress.

There's a chance my mother
will hate it. I know she wanted me to wear something floor-length,
but like Erick said, this
is
the dress. If mother doesn't like it, she can
come shopping herself.

"So what's the occasion? Planning a
party to celebrate your win this weekend?"

We both know he's talking about the
freestyle martial arts tournament that is sponsored by our dojo.
Three days of fighting. It's the biggest event of its kind in this
part of Texas. I've been waiting all year to compete. Besides being
able to Chase, this is the next most important thing to me, a
chance to showcase my talents and prove to my uncle I should be
allowed to join the family business.

Brett has wandered closer and continues
examining me from head to toe. What is he looking for, the keys to
the universe?

What the
heck
is he doing here?
We used to be friends, before the fight he threw two years ago, but
we haven't spoken in probably six months, and that was a "can I
borrow a pencil" conversation during a Chem II test.

We aren't friends now and never will
be, if I have anything to say about it. I don't hang with
quitters.

The sales lady finishes pinning me up
and advises me to be careful getting out of the dress, so I don't
stick myself. Like I'm five years old or something.

I turn to step off the block and teeter
in the heels. I reach out for something to steady myself with, and
my hand is surrounded by a dry, warm grip.

I lurch on the edge of the viewing
block, about to rip my hand away from his, but he gives a gentle
tug, and I have to step off or fall down.

He uses my momentum to swing me in an
almost-unawkward dance turn beneath his arm.

We move together naturally in the
motion. With the extra height the heels give me, my temple brushes
his jaw. My stomach swoops like I'm on the first giant hill of a
roller coaster.

My ankle turns in the uncomfortable
shoes. It's the only excuse I have for staying in his arms. He dips
me, one hot palm searing my bare upper back. He leans over me,
supporting most of my weight, those blue eyes startling, so close I
can see light brown flecks surrounding his irises.

"Get your hands off of me." I jerk away
and stumble, but I catch myself on the dressing room
wall.

I slip inside the curtains before he
can see how I'm shaking. Trembling all over.

Why does he affect me this
way? Even after
knowing
he is a liar. He claims not to have thrown the
last fight of the competition two years ago, but I know he
did.

"You never did say what the dress is
for," he calls out.

Most of my friends think I'm an open
book, but I have two secrets.

One, I'm in love with Emily Santos and
have been since we were fourteen. I’ll never forget how she took me
down to the mats while sparring at our martial arts practice. It
was love at first fight.

Emily has made it clear—over and
over—that she's not interested. Doesn't even want to be my
friend.

So it's time for the infatuation to
end. Today.

I've given myself twenty-four hours to
purge her from my system. I'm tired of these unrequited feelings,
and I'm ready to move on to greener pastures.

I've seen the way other girls look at
me. I know I'm hot. Toned from working out and the martial arts
Emily and I have in common. I'm ready to get some action
elsewhere.