River-Horse: A Voyage Across America 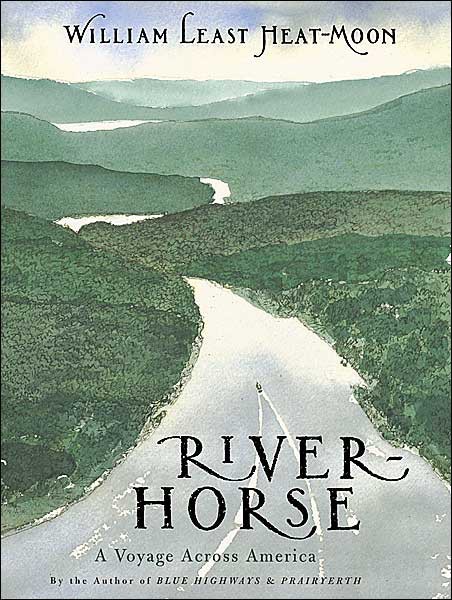 A Celestial Call to Board

Up Rivers Without Sources

There Lurk the Skid Demon

Where Mohicans Would Not Sleep

Snowmelt and a Nameless Creek

The Pull of a Continent

Released from the Necessity of Mundane Toil

We Sleep with a Bad-Tempered Woman Tossed by Fever

How the Sun Rose in the West to Set Me Straight

An Ammonia Cocktail and a Sharp Onion-Knife

A Flight of Eagles, an Iron Bed, and So Forth

Proving the White Man a Liar

The Day Begins with a Goonieburger

Along the Track of the Glaciers

From Humdrummery on down toward Tedium

A History of the Ohio in Three Words: Mastodons to Condoms

A River Coughed Up from Hell

A Necessity of Topography and Heart

Nekked and Without No Posies

The Great Omphalos in Little Egypt

A Night Without Light on a River Without Exits

The Ghost of the Mississippi

To the Tune of “Garry Owen” We Get Ready

We Start up the Great Missouri

I Attach My Life to the Roots of a Cottonwood

A Language with No Word for Flood

Looking the River in the Eye

Gone with the Windings

The Dream Lines of Thomas Jefferson

A Water Snake across the Bow

Sacred Hoops and a Wheel of Cheddar

We Find the Fourth Missouri

The Phantom Ship of the Missouri Reeds

How to Steal Indian Land

Sitting Bull and the Broom of Heaven

How to Be a Hell of a Riverman

Yondering up the Broomsticks

Chances of Aught to Naught

We Walk under the Great River

My Life Becomes a Preposition

Planning for Anything Less than Everything

Weaknesses in Mountains and Men

No Huzzahs in the Heart

Eating the Force that Drives Your Life

An Ark from God or a Miracle of Shoshones

A Shameless Festal Board

Messing About in Boats

The Far Side of the River Cocytus

Place of the Dead

Theater of the Graveyard

A Badger Called Plan A

Robot of the River

A Taproom Fit for Raggedy Ann

Salt to Salt, Tide to Tide

An Afterword of Appreciation

If You Want to Help

The Library of Congress has cataloged the print edition as follows:
Heat-Moon, William Least.

River-Horse : the logbook of a boat across America /
William Least Heat-Moon.
p. cm.

A landform atlas of the United States is available at
http://fermi.jhuapl.edu/states/
.

Title page lettering and endpaper map by Ed Richardson.
Endpaper drawing and painting on page
[>]
of Nikawa by Rod Guthrie.

Without a copilot, there would have been no voyage, and so this book is for Pilotis who was these seven: Motier Duquince Davis, Robert McClure Lindholm, Linda Jane Barton, Jack David LaZebnik, Peter King Lourie, Robert Scott Buchanan, Steven Edward Ratiner.

If you want the specifications: she was made of fiberglass laminate over an end-grain balsa core two inches thick, with a flat hull aft a V-shaped bow; just under twenty-two feet long and about eight in beam, approximately seventeen hundred pounds empty, with an eight-inch minimum draft and about thirty inches when motored and loaded; called a C-Dory and built near Seattle in January 1995. The boat readily fit onto a small trailer.

She had only essentials: a compass, a depth finder, paired tachometers, and gauges for each of the two fifty-eight-gallon tanks that fueled the twin forty-five-horsepower, four-stroke Honda engines (efficient and environmentally advanced). The single window-wiper worked by hand-crank. Our radio was an Apelco marine-band pocket model. To save weight and increase range, we did not fill the freshwater reservoir, and to avoid head duty and have another reason to stop in river towns when we came across them, we left behind the chemical toilet.

Forward in the cuddy was a cramped V-berth, and in the pilothouse (headroom, six feet two inches) we could make a second, if narrow, bunk by lowering the small navigation table. Aft the pilothouse was an open cockpit or welldeck covered with a blowsy canopy, a nice place for sitting, sipping, and watching when we moored.

The hull, with molded lapstrakes to throw off spray, derived from the classic American dory perfected in the eighteenth century to carry fishermen into the rough coastal waters of the northeast Atlantic. Our C-Dory was not fast, but she was stable, sturdy, maneuverable, re-sponsive, and yare. The fusion of her fiberglass upper and lower parts in effect made the boat a single unit. (Atop the pilothouse we carried a nine-foot, one-person Keowee kayak for places even the flat-hulled dory couldn’t enter. For the shallowest rivers, we had a square-stern, seventeen-foot aluminum Grumman canoe and a tiny four-horsepower Evinrude motor which, when off the water, traveled with the trailer.

If you imagine a Maine lobster boat crossed with a turn-of-the-century harbor tug, you have our C-Dory, Nikawa, a name I coined from the Osage words ni, river, and kawa, horse, and pronounced Nee-
KAH
-wah. Indeed, she was a tough but sweet little river horse.

On the forward bulkhead, near the helm, I attached a wooden plaque, a proverb from the Quakers:
PROCEED AS THE WAY OPENS
. Aft, above the door to the welldeck and motors, I put up another, this one from Joseph Conrad’s Heart of Darkness, the advice Marlow receives before ascending the Congo River:
AVOID IRRITATION
. I have spent my life trying to practice such simplicities, and when I fail, paying the costs; in April of 1995, we, my copilot and I, set out to test those admonitions in a venture of some moment and considerable chance.

The bulk of the water in New York Harbor is oily, dirty, and germy. Men on the mud suckers, the big harbor dredges, like to say that you could bottle it and sell it for poison. The bottom of the harbor is dirtier than the water. In most places, it is covered with a blanket of sludge that is composed of silt, sewage, industrial wastes, and clotted oil. The sludge is thickest in the slips along the Hudson, in the flats on the Jersey side of the Upper Bay, and in backwaters such as Newtown Creek, Wallabout Bay, and the Gowanus Canal. In such areas, where it isn’t exposed to the full sweep of the tides, it accumulates rapidly. In Wallabout Bay, a nook in the East River that is part of the Brooklyn Navy Yard, it accumulates at the rate of a foot and a half a year. The sludge rots in warm weather and from it gas-filled bubbles as big as basketballs continually surge to the surface. Dredgemen call them “sludge bubbles.” Occasionally, a bubble upsurges so furiously that it brings a mass of sludge along with it. In midsummer, here and there in the harbor, the rising and breaking of sludge bubbles makes the water seethe and spit. People sometimes stand on the coal and lumber quays that line the Gowanus Canal and stare at the black, bubbly water.

A Celestial Call to Board

F
OR ABOUT HALF A LEAGUE
after we came out of the little harbor on Newark Bay at Elizabeth, New Jersey—with its strewn alleys and broken buildings, its pervading aura of collapse, where the mayor himself had met us at the dock and stood before a podium his staff fetched up for him to set his speech on, words to launch us on that Earth Day across the continent as he reminded us of history here, of George Washington on nearly the same date being rowed across to New York City on the last leg of his inaugural journey—and for the half league down the Kill Van Kull (there Henry Hudson lost a sailor to an arrow through the neck), we had to lay in behind a rusting Norwegian freighter heading out to sea with so little cargo that her massive props were no more than half in the water and slapping up a thunderous wake and thrashing such a roil it sent our little teakettle of a boat rolling fore and aft. I quickly throttled back, and the following sea picked up our stern and threatened to ride over the low transom into the welldeck. We had no bilge pump to empty it, and the cabin door stood hooked open to the bright blue April morning and the sea air of New York Bay.

Twas The Knight Before Christmas (Something Great Series) by Clarke, M.
The Iron King by Julie Kagawa
The Very Best of F & SF v1 by Gordon Van Gelder (ed)
Abiding Ink (Inked in the Steel City #4) by Ranae Rose
Unlacing the Innocent Miss by Margaret McPhee
The Break by Deb Fitzpatrick
The Courtship of Dani by Ginna Gray
Krewe of Hunters The Unseen by Heather Graham
Mourning Dove by Aimée & David Thurlo
Fire Within by Ally Shields