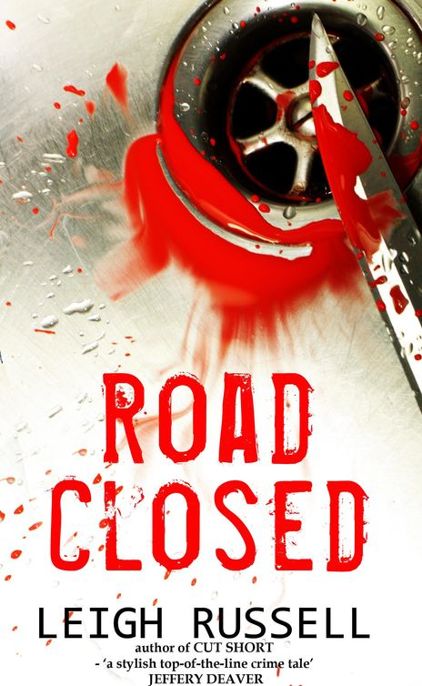 ‘Road Closed
is a gripping, fast-paced read, pulling you in from the very first tense page and keeping you captivated right to the end with its refreshingly compelling and original narrative.’

‘keeps you guessing until the end and packs some powerful surprises’

‘a gritty page turner from the start’

‘an even better read than
Cut Short
!’

‘Russell paints a careful and intriguing portrait of a small British community while developing a compassionate and complex heroine who’s sure to win fans.’

‘
Cut
Short
is not a comfortable read, but it is a compelling and important one. Highly recommended.’

‘Simply awesome! This debut novel by Leigh Russell will take your breath away.’

‘A pretty fine police procedural, with a convincing if disconcerting feel of contemporary Britain.’

‘A surefire hit – a taut, slick, easy to read thriller’

I would like to thank Dr Leonard Russell for his medical advice, Derrick Pounder, Professor of Forensic Medicine at the University of Dundee, for his expert help, Robert Dobbie of the British Transport Police for his support, the Red Watch team at Harrow Fire Station for their time, Keshini Naidoo for her guidance, my agent, David Marshall, for his invaluable assistance, Annette Crossland for her inspiring enthusiasm, and all the team at No Exit Press.

‘All things that we clasp and cherish,
Pass like dreams we may not keep.’

The glass cutter made a soft scratching sound. Slowly Cal dislodged the panel with the tips of his gloved fingers and reached in to undo the window catch. His companion’s lanky frame hovered awkwardly on the sill as he swung his legs over. A flash of torchlight revealed they were in a kitchen.

‘Hungry?’ Ray grinned and nodded at a packet of chocolate Hobnobs beside the kettle. Cal put his finger to his lips. Ray instantly froze, his eyes wary. The distant hum of a car was carried in on the breeze from the open window. Inside the house all was quiet. They made their way into a broad hallway. Cal squinted up at his companion, then turned and led the way up the stairs.

They went into a study. The beam from Cal’s torch hovered over a desk. Ray seized a digital camera and shoved it into a khaki bag slung across his shoulder. The top drawer of the desk was locked. Cal bent down and picked at the catch with practised fingers. It slid open with a click.

‘Jackpot,’ he whispered with barely concealed excitement. He drew out a leather jewellery case and opened the lid. They caught a glimpse of stones, glittering red and green and white.

‘Is it the real thing?’ Ray’s hood had fallen back to reveal a mess of sandy coloured hair above bulging watery eyes.

‘Let’s get it home for a closer look.’

As they made their way back to the stairs, Ray grabbed Cal’s arm.

‘Thought I heard footsteps.’ They stared at one another, straining to hear. The house was quiet. They edged forwards. The bag jingled softly on Ray’s back. They reached a bend on the landing, and a voice startled them.

‘Elliot? Is that you, Elliot?’

At the same time, the overhead light flicked on, making them blink. An old lady was standing in front of them, her figure silhouetted in an open doorway. She gasped audibly as she took in the two figures staring at her across the landing. ‘Who are you?’ she rasped. Her eyes glared wildly at them. One hand was pressed against her chest, the other pushed at the door. Cal leapt forward and seized the old woman by the arm. ‘I’m calling the police,’ she faltered, but her legs buckled.

‘First things first.’ Cal lifted the woman off her feet. Shouldering Ray to one side, he strode past, and hurled his burden with a grunt. They watched her crumple and disappear backwards down the stairs.

‘What did you do that for?’ Ray’s face was rigid with terror.

‘Stupid cow shouldn’t have put the light on. Don’t worry,’ Cal grinned. ‘She can’t identify us now. Come on, retard, let’s get out of here.’

A shudder ran through Ray’s long frame. He leapt forward and bounded down the stairs. His boot accidentally kicked the woman who lay, motionless, at the foot of the stairs. Her body jolted at the impact. Charging down behind Ray, Cal almost tripped over her inert figure. Struggling to regain his balance, he knocked into Ray. The bag slipped from Ray’s shoulder. It fell with a clatter that seemed to reverberate around the walls. Gold chains and coloured jewels spewed out of it.

Their feet thumped on the carpet. Ray reached the front door first. He twisted the handle. The door didn’t budge. It
was double locked. He kicked at it and swore aloud. They turned and ran back along the hall, across the kitchen and out of the open window into the cool of the night air.

When they reached home Brenda was awake, shaking, in her chair.

‘Make us a mug of tea,’ Cal grunted. Brenda scurried to the kitchen, head lowered, shoulders hunched. Cal turned to Ray and held out a hand. Cal’s face darkened and seemed to swell.

‘I don’t know what happened, Cal. I was scared. It must’ve slipped off my shoulder back in the house, when we were doing a runner. I reckon I dropped it in the hall, when… the old woman…’

‘You left it behind? All that gear?’

Cal’s voice was low, measured. ‘You retard,’ he said. ‘Was there anything in the bag could be traced back to you?’

‘No.’ Ray’s face shone, sweaty. ‘I swear it, Cal. I picked it up at the market like you said and I never touched it, only with gloves on. I did everything just like you said, Cal.’

‘Like I said?’ Cal was yelling now. ‘If you’d listened to me, you wouldn’t have just lost us a small bleeding fortune.’

Brenda came in and set two steaming mugs down on the table. ‘Give it a rest, Cal,’ she said.

Cal spun round. ‘Or what?’ he roared. Brenda cowered away and sat down. ‘You still here?’ Cal turned his attention back to Ray. ‘We’re finished.’

‘Give us another chance,’ Ray pleaded. ‘Just one more chance.’

‘He can piss off,’ she replied. Ray’s eyes met hers in a cold stare. Her head drooped. She stared down at her fingers, picking uncontrollably at her sleeves.

Deceived by Jess Michaels
Stuffed Shirt by Barry Ergang
Friends and Lovers by Joan Smith
The Billionaire's Baby Arrangement by Charlene Sands
Died in the Wool by Ngaio Marsh
The Garden Path by Kitty Burns Florey
The Renegades (The Superiors) by Hillbrand, Lena
The Space Between by Thompson, Nikki Mathis
Then Came You (The Wilde Sisters #2) by Marianne Rice
Born Cheetah by Zenina Masters