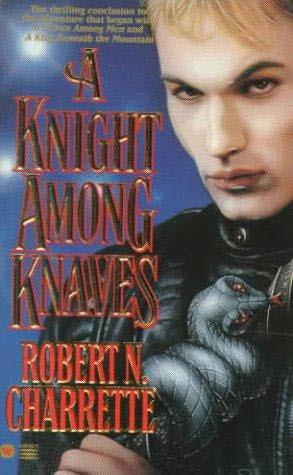 As
our story opens

With the awakening of heroes held for centuries in magical sleep and the release of the spells binding Calibuur, the alignment between our world and the otherworld has grown stronger. Where once the doorways were closed, they now stand open. Creatures both horrific and benign make the crossing with greater ease, and magic is loose in the world. Yet the otherworldly manifestations remain mysterious and, to most, unknown. Science still denies the magic, as do the governments and megacorporations that rule our world. But there are those who know the truth: the world has changed irrevocably.

The scramble for position in the new world is under way. Some seek to save our world from the revenant magic. Others strive to exploit the magic and make it their own. Still others seek to use the magic to accomplish a greater, more sinister change in the order of the universe.

The enigmatic elves of the otherworld have sought the reopening of the ways between the worlds. The secretive dwarves, long hidden in their underearth homes, have fought against the convergence of the realms. Humans are caught in the middle, often
as
unknowing pawns. Those who are aware of the conflict, depending on their beliefs and affiliations, make efforts to aid, to hinder, or to pursue their own agenda. Alliances form and dissolve .Yesterday's opponent becomes today's collaborator arid trusted partners become dangerous adversaries. Nothing is as it seems.

Charley Gordon's spine didn't appreciate the shock of the verrie's landing. The Omni Dynamics MRVWC-7 Mamba™ was no luxury air taxi, but then an air taxi wouldn't have been able to make a landing pad out of a Providence city street, as the Mamba had. Dank night air swirled into the cockpit as the canopy swung up.

Hagen hauled himself out of the pilot's seat and dropped to the ground, disdaining to use the climbing ports. He sank to a crouch as he landed, absorbing the impact with the practiced ease of a paratrooper. He scanned the surrounding streets and buildings before scowling up at Charley.

"Come on, Gordon. You're not going stone on me, are you?"

Going stone? Maybe. Why
shouldn't
he be scared? He'd seen what the guy they were chasing could do. Going after him with a flight of milspec aircraft had seemed almost reasonable, but what Hagen proposed doing now was considerably less so. But it had to be done, didn't it?
Something
had to be done. A monster like Quetzal couldn't be allowed to ran loose.

The flight coveralls Charley wore were made of Wear-Iron™ ballistic cloth, pure milspec; Charley had recognized the smell when he'd put them on back at the Mitsutomo command center. Their oily odor now seemed to overwhelm the other scents rising from the Mamba and mixing with the dirty Providence air. "Comfortable protection," the manufacturer's slogan said. Charley felt neither comfortable nor protected.

Charley couldn't pretend that engine noise drowned out Hagen's question. The Mamba's engines were idling, no louder than a car's engine. Their companion ship hovering overhead was only a little louder; the sheathed turbos of Mamba gunships were remarkably stealthy.

It was time to get moving, like it or not.

"I heard you," Charley said, doffing his flight helmet. He immediately missed the amplification circuitry that had made the dark night no more an impediment than a hazy day. He tried not to think about the advantage he had just surrendered and hauled himself out of the cockpit. Disoriented by the decreased visibility, he had a little trouble climbing down. By the time Charley joined Hagen on the pavement, the little man had dug a pile of stuff out of the verrie's cargo compartment and was burrowing into the Mamba for more.

Milspec required survival equipment to be stored there. Hagen pulled an assault vest from the heap and handed it to Charley. It was heavier than the police tactical vests that Charley was used to, but the fabric cover looked similar. Charley strapped it on without a word. He took the helmet Hagen handed him as well. Relieved to see that it had amplification circuits, he switched them on at once. The toys in Hagen's pile were not standard military-issue survival gear, but they'd do more to ensure survival for the crew of this verrie than the usual stuff.

He looked at the man he was about to trust his life to. Hagen was short, barely up to Charley's shoulder, but built like a tank. Sturdy, no doubt—but reliable? Charley had no idea, and he couldn't help worrying. Hagen was corporate, and Charley hadn't met a corporate yet who could be trusted to do more than watch out for his own butt.

Yeah, Hagen was corporate all right, flashing his masters' logo all over everything he wore. His coveralls, vest, and helmet all bore the logo of Yamabennin Security Services, a member of the Mitsutomo Keiretsu. All the equipment that Charley was using belonged to Mitsutomo, too, but Charley's stuff was unmarked. Somebody not only had anticipated the possibility of something serious on the ground, but had gone out of his way to make sure that Charley would not be wearing anything that could tie him to Yamabennin.

It hadn't been Charley.

This whole thing had blown up so fast, and the pace seemed to be accelerating. He wondered again how smart he had been to get involved. Not very, he decided, as Hagen handed him an Adler Arms KAR-99 assault rifle.

The weapon was popular with security firms and common among European tech runners in the sprawl; Charley had taken familiarization training with it, but the cylinder mounted under the barrel like a bayonet was new to him. Wires ran from the base of the cylinder to the scope and to the shoulder stock. The setup looked a little like a laser tar-geter.

"High-actinic spot," Hagen said, snatching up the weapon's dangling data cable and snapping its terminal into a socket on the side of Charley's helmet.

Data appeared in the air before Charley's eyes. It startled him; it had been a while since he had used a helmet with a heads-up display. The glowing lines, bars, and numbers provided targeting crosshairs with range readout as well as data on the spotlight's power level and the ammo status on the weapon. As he expected, the crosshairs moved as he shifted the barrel of the weapon. Very smooth. Very sharp. More milspec equipment, much better than the department's SWAT helmets.

"Selector switch responds to verbal commands of 'single,' 'burst,' and 'light,'" Hagen told him. "Or you can use the manual switch on the stock. Usual position. The light is one position past the burst setting. The fire selection indicator will stay at burst."

"You think this is enough to take on that thing?" Charley asked.

"It's all we've got at the moment," Hagen answered, sounding unhappy. Charley understood; he wasn't happy either, but the job had to be done, and soon. Before Quetzal killed again.

This whole operation was on very shaky legal grounds, but it wasn't the first time Charley had stretched the rules to do what needed doing. Hoping it wouldn't also be the
last
time, he fished out his shield, flipped the wallet open, and tucked it into the vest's breast pocket. At the moment, it was the best he could do to show he was a cop.

They were using his authority as a detective in the New England Cooperative Police Department's Special Investigations Unit to justify the application of Mitsutomo's corporate muscle in order to expunge the abomination that was Quetzal. Things like Quetzal weren't supposed to exist, but they did. Everyone in Special Investigations knew that they did. Hagen and his people knew, too. But no one publically admitted knowing. Somehow it was easier to go on living in a world with such things when you didn't have to admit that they were real. You dealt with them when you had to, and only when you had to, and then you did whatever you could to get them out of your world.

That's how Charley had always thought about it—the stuff of childhood nightmares didn't belong in the real world. Certainly Charley didn't want things like Quetzal in
his
world, and in his five years with SIU he had always been willing and able to do something about it. Now though, he was walking toward a dark hole in the side of a mountain and he wasn't quite so confident. He kept thinking about the twisted iron that Quetzal had left behind him at the university gate. Anyone with the power to do that to iron would be able to do terrible things to flesh.

This was not the time to think about
thatl
Charley started forward. They had to go in
there
and do what they had come to do.

There
was an abandoned railroad tunnel running through the hill that made up the bulk of Providence's East Side. The maps on the Mamba's nav console had shown only two entrances, both of them supposedly sealed. Two others of their Mamba flight had gone to watch the far end; they reported it sealed but were holding station anyway. Their airborne partner hovered at this one, its spotlight trained on the wall only a dozen yards away. Centered in the beam was the dark jagged shadow that was the hole through which Quetzal had entered the tunnel.

By unspoken agreement Charley and Hagen stopped just outside the cone of the beam. Hagen shook his head. He seemed as hesitant as Charley now. The short man's visor was still up; his face was pallid. His mouth drew in, disappearing into the bush of his mustache and beard, and he muttered, "We shouldn't be going in there without more backup."

There was debris around the opening, ordinary trash of the sort Charley had seen in innumerable areas of the sprawl. Syringes and chip shells were as common as food and drink trash. All so ordinary. The sort of thing you saw wherever the homeless had forced their way past the power structure's barriers and laid a squatter's claim to a place.

There were at least two squatters in there right now. The fools had ignored Charley's warning and gone in. He hadn't been able to tell them what had gone into their hidey hole ahead of them—what could he have told them that they would have believed? Charley was the badge, the establishment, a tool of the system that had jettisoned their kind. Charley knew streeters well enough to know that they wouldn't listen to him. Even if they did, they might have preferred Quetzal over Charley. Charley was the devil they knew, Mr. Authority—while all they would know of Quetzal's evil would be what Charley told them. To them it would all just be more establishment propaganda.

But this time the cry of wolf was real. There really
was
a monster in the dark of the tunnel, and it was past time to do something about it.

The hole in the retaining wall was stark and ominous in the verrie's dazzling spotlight. Their quarry was somewhere inside, in the dark. Quetzal should be trapped, cornered like a rat. Cornered rats had a reputation for fighting back.