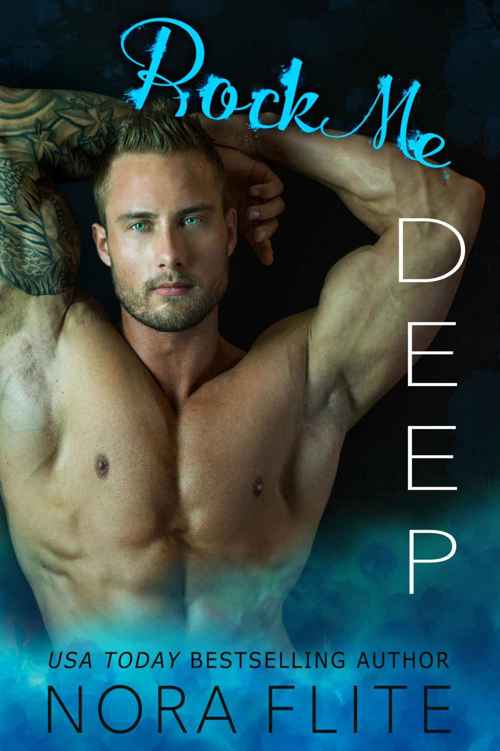 All rights reserved. ROCK ME DEEP is a work of fiction. Names, characters, places, and incidents either are the product of the author's imagination or are used fictitiously. Any resemblance to actual persons, living or dead, events, or locales is entirely coincidental.

This was originally published as the Body Rock Series 1-4, but has been re-released in this updated format to better tell a fuller, richer story.

There's also a sexy bonus short story in the back about Brenda and her crush!

Want a FREE short story about one night in Vegas with a bad boy? Join my newsletter and you'll get it delivered to your email!

Other books by Nora:

Last of the Bad Boys

Before we begin! This was originally published as the Body Rock Series 1-4, but has been re-released in this updated format to better tell a fuller, richer story.

There's also a sexy bonus short story in the back about Brenda and her crush! ;)

Who could it be?

And while I have your attention... Want a free short story about one night in Vegas with a bad boy?

Join my newsletter and you'll get it delivered right to your email!

Okay! Back to why you're here—the story!

T
he cigarette hung from my lips, red-tip preparing to fall to the earth. If I moved, the ash would spill. It would take so very, very little to break that perfect, gravity defying cylinder.

My shoulder swung, carrying my knuckles straight into Johnny's mouth. The end of my cigarette dissipated, falling away with my abrupt movement.

Johnny tumbled backwards, spilling onto the hard floor and taking a few other chairs with him. Around me, I heard gasps, especially the sweet cries of the groupies who'd been on him like flies just seconds ago. “What the
fuck,
man!” he shouted, sprawled there in shock and pain.

I planned to give him more of the latter.

“Whoa, man, hold up!” The voice came from my left, a familiar, high-pitched rattle; Colt, the drummer for my band. He was a good guy. That meant there was no way was he going to lay a hand on me.

Glancing sideways, I saw how he stood there with his fingers spread.

No. Colt wouldn't stop me.

Turning, I realized Johnny was backpedaling across the floor. We were in a private room in an otherwise hardly-private bar, the only shabby environment available after our show.

Johnny kept moving on hands and knees. He wouldn't get far doing that, not with my long legs striding over the toppled chairs.

“Yo, man!” he shouted, grappling with my wrists as I lifted him from the ground. He wanted to escape, who wouldn't? “Drez, man, fucking stop! What's your problem?”

He was light, I was strong. It made bringing him up to eye-level a simple matter. Our noses nearly touched, the blood on his teeth smelling like rust. “You know what my fucking problem is, Johnny. You better
fucking
know.”

The centers of his eyes were tiny pin-holes. He struggled once more, the crimson stain dribbling on his shirt growing when I gave him a hard shake in response. “I—what the hell are you talking about?” He was already on his way to being piss-full of beer, his breath reeking.

“You were a damn mess out there tonight,” I snapped. Just thinking about how he'd dropped his guitar in the middle of our opening song made my neck cramp up.

“Oh, come on,” he laughed, eyeing the room of gawking people like they might agree with him. “I hit a few wrong notes, that's nothing to get so—”

He didn't finish his sentence; the thud of him hitting the floor did it for him. Johnny coughed, then wheezed as I pressed my shoe onto his chest. “You fucked up every song, Johnny. You've been a wreck for weeks. I'm done with it.”

I pulled away, ignoring how he grabbed for my ankle. “Wait! What the hell does that mean?” The hard lines of his mouth twisted into a nervous smile. “It sounds like you're kicking me out of the band, man, but you can't do that. You
know
you can't do that.” Johnny pulled himself to his knees, laughing at my back, laughing at the people who still just stared. “You can't do that, you couldn't—it's not even an option!”

Digging into my pocket, I slid a new cigarette between my lips. Everyone kept telling me to quit; it was an awful idea for a singer to smoke.
I only do it when I'm pissed or stressed. Too bad that's all the fucking time lately.

“Hey!” Johnny wasn't laughing anymore. I heard people mumbling, then a scream. It was sharp, mixing with the explosion of glass near my face. The bottle left a wet stain on the edge of the door, some of it trickling onto my cheekbone. “Get back here you fucking asshole, you can't do this!”

Pulling the cancer-stick from my mouth, I glanced behind me. I was going to say something about how I
could
kick him out, I'd just done it, in fact. Instead, I saw Johnny with his arm wrenched back. He had another beer, preparing to launch it at my defenseless face.

There was a second where I wondered if my fans would dig my new scars.

A large man, larger than me, hooked his arm around Johnny's throat. I hadn't noticed Porter before now. The bassist for my band wasn't much for dank drinking holes, he usually just made time for the swankier after-parties.

He had our—former—singer on the floor in a simple swing of his thick arms. Johnny had been choked into submission a few times in our career together, but this was nothing like that.

His ragged shouts broke the anxious silence like it was a fragile egg. The groupies, the waitresses, everyone began to move. Some helped Porter with subduing Johnny, but mostly, everyone wanted to take a picture of the conflict. I was sure I saw seven girls on their phones.

Maybe some of them are calling the cops.

Who the fuck was I kidding? All they cared about was getting the most likes or upvotes or whatever the hell it was these days on their social media accounts.

Breaking into the night air, I closed the backdoor and leaned on the building's cold wall. My jacket sounded like aluminum foil when I slid down, sitting on the asphalt with a grunt. It was dark, the only light coming from a single flickering street lamp. The dying orange reminded me of my unlit cigarette.

Patting myself in search of my lighter, I glanced up as the door cracked open beside me. “Near death by a flying bottle sure makes you wanna rush out and get some of that tasty lung cancer, huh?” Porter asked.

Chuckling, I spoke out of the side of my mouth, still looking for my lighter. “I'll take tobacco over a concussion any day.”

He crouched beside me, his own lighter flicking to life. Leaning in, I let him turn the tip of my smoke cherry-red. “Funny,” he mused, “I didn't know there were only two options here.”

Inhaling deeply, I shut my eyes while smoke floated around us both. “Tragedy just likes to rub elbows with me, that's all.”

The thick man pulled his knee to his chest, frowning up at the foggy sky. The stars were nowhere to be seen. “You're serious about getting rid of Johnny.”

Flicking ash, I stared at the bloody smudges on my knuckles. “Yup.”

“Guess that means we need a new guitarist, huh?”

Porter scratched at his head, fingers not putting a dent in his blonde faux-hawk. “Well, fuck. You know Brenda is going to be pissed over this.”

He was right, and I
did
know it. Our manager was going to lose her shit when she heard I'd kicked Johnny out. Chances were, she'd already heard it through the tweets and blogs of our fans.

She'd already dealt with a number of things on this tour, but I'd be insane to think that would make her take this news any better. It would have been nice if any of the other bands playing with us as we went city to city could have caused a bit of havoc.

I waved smoke away from my eyes. “I didn't
kill
Johnny.”

“I did want to,” I said, sticking my smoke into the corner of my mouth.

That made him laugh, which got me to smile in spite of everything. My hand was burning from the sucker-punch, my mood dark as I imagined hunting for a new guitarist. “Whoever we get,” I mumbled, “We'll need them fast. We've got two days before the next show.”

Crushing the cigarette on the ground, I eyed Porter thoughtfully. “He'll need to be reliable, and not a damn joke like our last guy.”

“Our last guy who's probably not going to just vanish contentedly while we replace him.”

The back of my head tapped the wall. “Good point. So, he'll need to be tough, reliable, talented, and not mind that there's a good chance Johnny will take a swing at him someday."

Porter reached out, clasping my shoulder grimly. “Like I said earlier, Brenda is going to be
pissed
at you. No way we'll find someone like that, not out here, man. We're on fucking
tour!
” I moved to brush him off, but he just squeezed harder. The way his thin, near-white eyebrows lowered made me hesitate. “Drez, do you honestly think replacing someone like Johnny is possible at this stage in the game?”

Gently, I pried his fingers off of me. Standing to my full height, I brushed dirt from my jeans and gave Porter the most serious look I could. My voice was flat, all steel. “Yup.”

If only the situation could have been, too.

“E
asy with that,” I growled, reaching up to steady a speaker that had been tossed into the back of the van. “This is expensive equipment!”

The kid—he had to be younger than me, and I was only nineteen—just rolled his eyes. Like everyone else so far on this tour, he wasn't going to give me an iota of respect.

Biting my tongue was my only solution.
I'm beginning to second guess this whole trip,
I thought bitterly. Hoisting another case into the van, I wiped my forehead and sighed. Each time we packed up, preparing to move to the next location, I wondered if my muscles would give out.

The tour had only been going on for four days, but I'd assembled and disassembled the set for my brother's band three times. I wasn't very big, but I put my heart into helping—my everything, honestly.

Shooting a look at the guys loitering nearby, I thought,
We'd be done much faster if anyone else put in even half of my effort.
Most of the team consisted of groupie guys who were tagging along in the hopes of snagging second-hand pussy.

They hunted after each show, scooping up the girls who'd been denied private time with the bands. A few had even tried it with me... until I'd decked a guy so hard his jaw swelled up like a grapefruit.