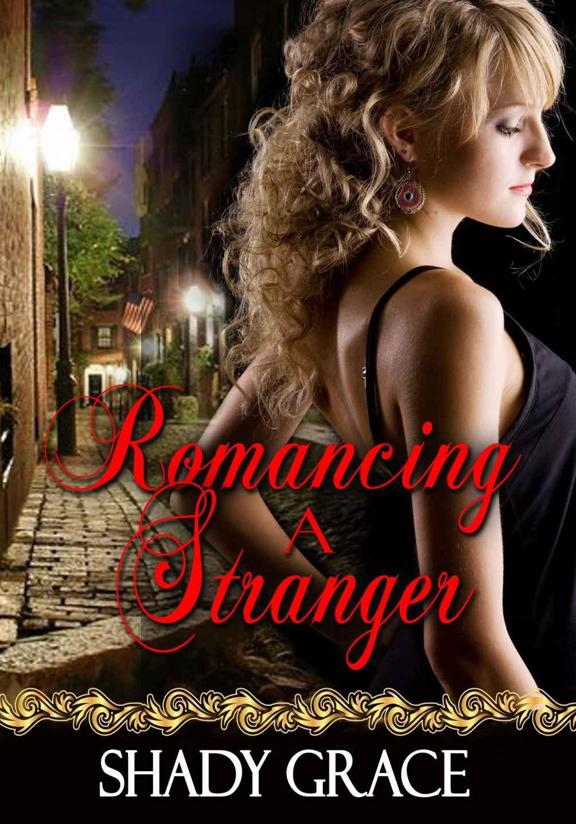 She’s unbreakable…until he kisses her.

Either Milli Bishop is drunk out of her mind, or she seriously just woke up one-hundred years in the past. One minute she’s gazing at an amethyst ball; the next she's fainting in the arms of a stranger…who claims to be her husband. Can she find her way back to the future, or will the taste of a real gentleman be too irresistible to escape?

He’s lonely…until the missus wakes up.

Warden Blackwood is confused by the sudden change in his estranged wife and believes she’s cut a path out of her head. Once frigid and indifferent, she’s suddenly arousing him with her scandalous seduction and shocking language. Should he continue his pursuit of a mistress amidst his loveless marriage, or learn to tame his wayward wife?

WHAT THEY ARE SAYING ABOUT

~ Arianne at
Night Owl Reviews
5 stars - Outstanding
“I thoroughly enjoyed this story and had to laugh at times through it as Millie must have seemed quite demented at times to these people of the past.”

~ Sarki at
My Earnest Reviews
Other Books by Author Available at Torrid Books:

The Edge of the Woods

Hold time dear to your heart
, the fortune cookie had said. “Whatever,” Milli slurred, as she stumbled down the brick path leading to her row house on Boston’s Beacon Hill, totally smashed.

After another date gone horribly wrong, she’d drunk so much wine she should look like a grape. She shook her head in self-pity, lost her balance, and ended up sprawled over the low cedar bushes bordering the walkway.

Milli discovered tonight—on her thirtieth birthday of all nights—that the guy she was seeing still lived with his mother. He was in his forties.

A bitter laugh rose up in her throat. So much for going to his place for hot birthday sex.

Well, at least the Chinese buffet was delicious.

Shame crept up her face and she bit back a sob. The cedar branches poked her back. Her feet ached from her new heels. She’d worn her best dress tonight, and now all she had was a prickly embrace from the cedar bush. How much more pathetic could she get?

All her life Milli had wanted love and companionship, which was probably why she caught the attention of less-than-adequate men. Maybe she tried too hard. Maybe she wore her hair the wrong way. Maybe her lipstick was too bright.

Enough of this
, she thought, wiping her tears away. She struggled to sit up in the bushes and tore the sleeve of her dress in the process.

“Oh, you fucking—” She let out a frustrated growl and yanked her arm away from the bush. Heat crawled up her neck and face from the sudden movement, making her dizzy.

“Is that you, Miss Bishop?”

The blurry image of Milli’s neighbor, Wilfred Bigsby, leaned out his window.

The old man chuckled. “Oh, shush, girl. You’re young, beautiful, live in the best neighborhood in town, and have plenty of time to find a good man. Did you get your package?”

“There was a delivery man here while you were out. Strange thing it was.” Wilfred paused, as if struggling for the right words. “The van he pulled up with wasn’t one I’ve seen before for mail, especially at this time of night. Anyway, I offered to take the box and give it to you when you got in, but he said no. Left it on your doorstep he did.” Another long pause. “Oh, don’t forget the power is going out at midnight, and Happy Birthday!” He disappeared back in his house, sliding the window shut behind him.

Milli swore under her breath, thinking old Mr. Bigsby was a nosy old fart. How did he know it was her birthday unless he was flipping through her mail again?

Maybe she should take him on a date. Desperation could make a woman go out with an annoying old man, and she was desperate, all right. Hopeless and pathetic.

Sure enough, a small brown box sat on her step.

Milli lifted and examined the package under the porch light.
Mrs.
Millicent Blackwood
was labeled on the top with no return address, but the receiver address was hers. How odd. They got her first name right, but the last name didn’t ring a bell. And the lettering looked like ancient calligraphy. She stared at the name on the label again, feeling a sense of uneasiness worm into her stomach.

Milli cast a glance to the street and surrounding doorsteps. Nothing seemed out of the ordinary. Shrugging off the strange feeling the package gave her, she shoved it under her armpit and fumbled to get the key in the slot.

The door opened, and pitch-black met her eyes. Throwing her keys in the general direction of the hall table, she kicked off her heels and switched on the lights.

Like so many days and nights before, she was met with silence in her home. No laughter of children or the comforting welcome of a man. She didn’t even have a pet to greet her at the door. Her life was a pathetic mixture of hard work and drunkenness.

She made her way to the kitchen and set the parcel down on the counter.
Is this supposed to be a birthday gift?
She had few friends, and they had already taken her out for drinks last weekend. Besides, Blackwood and Bishop were not similar by any means. Somebody in the mail department messed up.

“Well,
Mrs. Millicent Blackwood
, let’s see what we have.”

Milli grabbed a knife from the cutlery drawer, slid the tip through the brown tape holding the top flaps together, and opened the box. Sitting inside, surrounded by scraps of some soft-textured gold cloth, was an amethyst globe atop an ornately carved wooden pedestal.
What’s the meaning of this?

No note accompanied the globe. No indication at all of where or whom it came from. She reached inside and carefully pulled the amethyst out from the box. The workmanship and detail of the base was out of this world and appeared very old.

A chill made her arm hairs prickle. Why would somebody send her this? And was it really meant for her?

Etchings of intertwined foliage covered the base, encasing the smooth amethyst like a carving from ancient times, rich in detail and clearly handcrafted. The wood was very dark, almost black with a hint of red; she guessed it must be mahogany. Milli had seen globes before, but never of this beautiful quality. She lifted it high, cupping it firmly, and nearly dropped it when she read the engraved phrase beneath the globe,
Hold time dear to your heart
. What were the odds of seeing those words twice in one night?

Impossible. I must be drunk.

Fascinated, she swept her hands over the globe, captivated by how smooth it was. She didn’t think it was possible to cut and polish amethyst so perfectly. And she knew it was real amethyst by the swirled hues of purple, pink, and white within the globe.

The lights flickered and died.

Setting the globe down on the counter, Milli went to search for a flashlight. While she was digging through her closet, a rustling sound from somewhere in the house made her pause. After a recent string of break-ins in the neighborhood, she feared a burglar had gotten in.

She found the flashlight and gripped it like a weapon, and inched her way quietly down the hall. A rich, floral perfume wafted in the air. As she neared the kitchen, keeping her back tight to the wall, a light glinted through the crack under the door.

Garnering every ounce of courage she possessed, Milli swung open the kitchen door with a harsh cry, waving the flashlight like a sword.

Her hand paused high in the air, and her jaw dropped.

The amethyst globe was glowing like something out of a sci-fi movie, and then a flash of purple streaked through the kitchen.

Milli bit back a scream.

Something magnetic…something indescribable lured her closer to the glowing globe. She tiptoed to the counter, all the while her pulse pounding in her ears. It felt like she was floating there, as if she had no control of her movements. Milli couldn’t speak, couldn’t breathe, felt possessed by something out of this world as she picked up the globe.

The hues within the amethyst sparkled and danced in her wide, unbelieving eyes.

The globe pulsed and flashed like a strobe light. Objects in the kitchen swirled around her in hazy, elongated shapes.

Strange voices echoed in the air…before the world around her suddenly vanished.

Warden Blackwood was ready to set his cards down and win the pot when a disturbance in the parlor cut him short. It sounded like an argument.

Damn women. What have they done now?

“Come now, Blackwood, I’m sure your wife’s sister has the matter handled.”

“I’m sure she does, but if that babe in her belly arrives tonight and I’m not there to aid her, I’ll make you assist the midwife.”

Bromley’s face turned pale, and he averted his gaze back down to his cards.

Warden chuckled and threw his cards down. “That’s what I thought.”

He should not have left Josephine to her own devices with the ladies. A room full of dancing, drinking, and cavorting people was more than a handful for a woman about to burst with child. But he needed his time away from the opposite sex, if not for strong drink and male company, then for a moment’s peace.