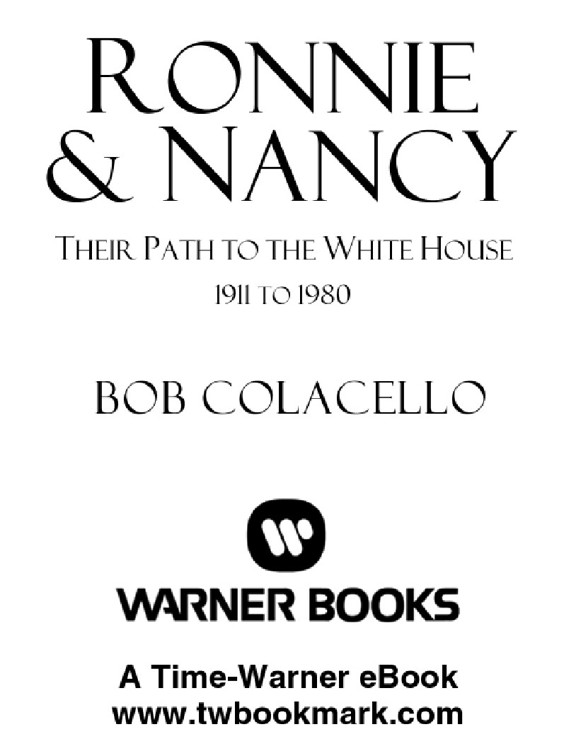 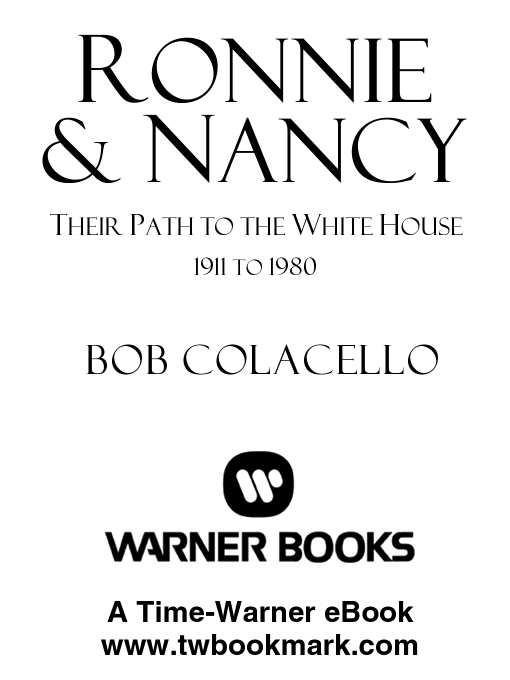 OTHER BOOKS BY BOB COLACELLO

Studios by the Sea: Artists of Long Island’s East End
(with Jonathan Becker)

THEIR PATH TO THE WHITE HOUSE

Visit our Web site at www.twbookmark.com.

To my father, John, who passed away

and my mother, Libby,

And to the late Jerry Zipkin,

who opened so many doors for me.

You say there can be no argument about matters of taste?

All life is an argument about matters of taste.

Oh, those Greeks! They knew how to live. What is required for that is to stop courageously at the surface, the fold, the skin, to adore appearance, to believe in forms, tones, words, in the whole Olympus of appearance. Those Greeks were superficial—
out of profundity.

ON SATURDAY NIGHT, MARCH 14, 1981, PRESIDENT RONALD REAGAN, who had been inaugurated less than two months earlier, and his wife, Nancy, went to dinner at Le Cirque, then New York’s most fashionable restaurant. The new President and First Lady had been to see a Broadway show—
Sugar Babies
, starring those Hollywood old-timers Ann Miller and Mickey Rooney—so it was about 10:30 when their motorcade turned into East 65th Street, where a small crowd cheered as they stepped out of their limousine. Caught up in the excitement, those of us in the restaurant spontaneously stood and applauded when the Reagans walked through the door, accompanied by their very close friends from California, Alfred Bloomingdale, the department store heir, and his fashion-plate wife, Betsy.

They were followed by the retired media tycoon Gardner Cowles and his wife, Jan, pillars of the Republican establishment, who had homes in 1

Ronnie and Nancy: Their Path to the White House New York, Southampton, and Miami and had been friends with the Reagans since the 1950s. Then came Jerry Zipkin, the acid-tongued Park Avenue bachelor who was Nancy Reagan’s best friend in New York—
Women’s
Wear Daily
, which for years had dismissed him as “the Social Moth,” now called him “the First Walker,” walker being its term for a single man who escorts society ladies to parties when their husbands are unavailable. On one arm Zipkin had Claudette Colbert, the ageless movie star, who knew the Reagans from their Hollywood days. On the other he had Etti Plesch, an Austrian-born dowager from Monte Carlo known for her prize-winning racehorses and her six rich husbands.

All eyes were on the presidential party as Le Cirque’s owner, Sirio Mac-cioni, showed them to the best table in the house—the corner banquette just to the right of the entrance, which Jerry Zipkin and his nemesis,
WWD
publisher John Fairchild, always fought over. Betsy Bloomingdale, who was giving the dinner, directed the seating, putting the President between her and Claudette Colbert, and the First Lady between Zipkin and Alfred Bloomingdale. One couldn’t help but marvel at how young—fit, tan, handsome—the President looked for a man who had just turned seventy. He beamed when the model Janice Dickinson, sitting a table away with Peppo Vanini, the owner of Xenon, a midtown disco that rivaled Studio 54 in exclusivity and decadence, raised her champagne glass and, in a voice loud enough for the whole restaurant to hear, announced how proud she was to be an American now that Ronald Reagan was in the White House. The entire room erupted into applause again.

Sirio had obviously packed the place with friendly faces, having consulted the day before with Zipkin about who should, or should not, get reservations. Among those at tables near the President’s were the octogenarian
New York Post
fashion columnist Eugenia Sheppard and her regular walker, Earl Blackwell, the octogenarian publisher of
Celebrity Service
; Princess Ira von Fürstenberg, of Salzburg and Paris, and the billionaire Spanish banker Alfonso Fierro, whose wife was an old friend of Zipkin’s.

I had been invited to Le Cirque that night by one of Zipkin’s favorite couples, Carolina Herrera, the Venezuelan socialite who was just beginning to establish herself as a New York fashion designer, and her aristocratic husband, Reinaldo, whose family had lived in the same house in Caracas since the sixteenth century. The Herreras’ other guests were Bianca Jagger, who had almost turned down their invitation, she told me that afternoon, because of Reagan’s campaign attacks on her native Nicaragua’s leftist San-Le Cirque: 1981

dinista government; the Italian movie producers Franco Rossellini and Countess Marina Cicogna, the latter with her longtime companion, Brazilian actress Florinda Bolkan; and Andy Warhol, who published
Interview
magazine, of which I was the editor. “Gee, Bob, this is
so
glamorous. Oh, it’s just so glamorous,” he said, with his flair for repetition. He had voted for Jimmy Carter.

I had voted for the winner. Like the majority of voters in forty-four states, I was fed up with the anemic wishy-washiness of the Carter administration, particularly in foreign policy, and turned on by Ronald Reagan’s full-blooded, unabashed patriotism, his clear delineation of right and wrong, his sense of certainty. Also, like William Safire, I was—and still am—“a libertarian conservative Republican contrarian iconoclast.”

I was brought up in an Italian-American family where becoming a Republican was equated with becoming an American, and where any mention of Eleanor Roosevelt was invariably followed by the comment “she should mind her own business,” usually uttered by one or the other of my grandmothers. Bess Truman, they never tired of saying, wore her corsage upside-down at the 1949 inauguration. My father, a World War II veteran who had fought in Europe and the Pacific and was one of the first Italian-Americans to hold an executive position in the Wall Street coffee trade, never got over Thomas Dewey’s loss or Harry Truman’s firing of General Douglas MacArthur, my father’s hero. My mother was a Republican com-mitteewoman in Plainview, the middle-class Long Island suburb where we lived from 1955 to 1968; in 1956 she had my sisters and me walk up and down the street waving signs saying, “I Like Ike,” “I Like Dick,” and

“Vote Row A All the Way.” Jackie Kennedy, my fashion-conscious mother and grandmothers used to say, dressed beautifully, but why shouldn’t she, they would add, repeating a popular Republican rumor, she’d been given a million dollars by her father-in-law to stay married to his son. For some reason they didn’t mind Lady Bird Johnson, but LBJ had to go—before I got drafted. By then I was at Georgetown University’s School of Foreign Service and a raging radical—I’d even joined Students for a Democratic Society, although I never told my parents that.

And then, in 1970, I went to work at Andy Warhol’s Factory, where in reaction to the lockstep liberalism of the New York art world, I found myself returning to my Republican roots. I voted for Ronald Reagan for the first time in the 1976 Republican primary, when he unsuccessfully challenged President Gerald Ford. It seemed to me that the Reagans were being 4

Ronnie and Nancy: Their Path to the White House unfairly portrayed by a largely Democratic press, which cast him as a B actor bozo invented and controlled as a politician by a sinister claque of ultraconservative Southern California tycoons, and her as the driven daughter of a John Bircher Chicago neurosurgeon who had played a major role in turning his dim-bulb son-in-law into a fanatical anti-Communist.

Somehow this didn’t square in my mind with a couple whose best friends were the fun-loving Bloomingdales and Jerry Zipkin, one of the most sophisticated men I had ever met. Zipkin had been friends with Warhol since the 1950s, and had taken me under his wing not long after I became editor of
Interview
; he was constantly calling with story ideas and sending gift subscriptions to his grand friends around the world.