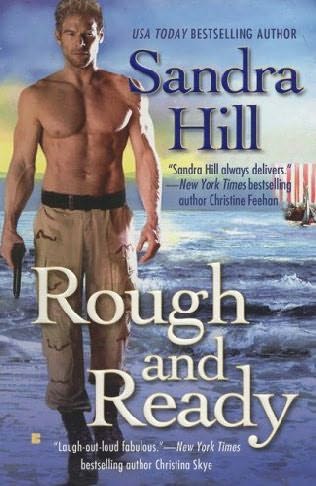 Lt. Torolf Magnusson and his team of Navy SEALs have gone back in time to eleventh-century Norselands on a search-and-destroy mission, but when they find they've landed in the middle of a sanctuary-filled with women-well, hoo-yah! Their plans are put on hold, much to the distress of Hilda, the head of the sanctuary. At first resistant to Torolf's pursuits, she soon succumbs to his passionate advances. But with victory in sight for Torolf, Hilda must face the fact that their love may not survive the test of time.

"Another wonderful story that includes action, adventure, passion, romance, comedy, and even a little time travel."

"A perfect ten! Wet and Wild is a must-read for everyone who loves great romance with heartfelt emotion. If you buy only one book… make it Wet and Wild."

"Only the mind of Sandra Hill could dream up this hilarious and wacky scenario.

The Vikings are on the loose once again, and they're wreaking sexy and sensual fun."

"Feeling down? Need a laugh? This one could be just what the 'dock whore'

Penguin Books Ltd., Registered Offices: 80 Strand, London WC2R 0RL, England This is a work of fiction. Names, characters, places, and incidents either are the product of the author's imagination or are used fictitiously, and any resemblance to actual persons, living or dead, business establishments, events, or locales is entirely coincidental. The publisher does not have any control over and does not assume any responsibility for author or third-party websites or their content.

The "B" design is a trademark belonging to Penguin Group (USA) Inc.

This book is dedicated with much appreciation to all those fans who have told me over these past ten years how much you appreciate my unique… okay, warped…

of humor. You know who you are. You are teachers, pilots, therapists, ministers, housewives, Norwegian sailors, college students, nurses, men and women from all walks of life. I have been particularly touched by those of you who say my books have helped you through some life struggle… and by those readers who are nobly serving in the military in harm's way.

When I first started writing romance, I had no idea that humor could touch readers so strongly. I thought only books with serious messages helped people.

The most extreme example I can offer is the precious fan of mine who died of cancer and asked to have one of my Viking books placed in her coffin so that, at the viewing, people would look and then smile. Yep, humor to the end. But I am equally touched by the working mothers who need a little humor in their lives at the end of the day.

To show my appreciation, please visit my website, where I have something FREE

If I see a maid with whom

it would please me to play,

I can turn her thoughts.

Yea, I can touch the heart

Of any white armed woman.

This maid with ash-smooth arms

is already getting used to

At the loves of man To laugh is not meet for anyone ever.

When fools yield not

To the lure of a lovely maid.

"What would you do if you could change history?"

"Huh? I drove all the way from Coronado for you to ask me that!" Torolf Magnusson was not amused.

The question had been posed by his sister Kirstin, a Ph.D. scholar of ancient studies who taught at UCLA. Her Mensa brain was always pondering crap like this.

"If you could go back and eliminate a Hitler before the Holocaust or prevent the Black Death, would you do it?" she persisted.

"Whaaat? This is why you dragged me into these dusty stacks? To ask some dumb-ass hypothetical questions?" Torolf sneezed for about the twentieth time.

Torolf shrugged. He had only a weekend liberty from his Navy SEAL duties, and he was wasting time playing what-if games with his sister. He'd rather be back at the Wet and Wild having a beer with his buddies and a little female companionship, not of the sisterly persuasion.

"Don't be such a grouch." Kirstin pulled a thick tome with a crumbling leather cover off a high shelf and placed it carefully on a table. "Look at this."

He exhaled with a weary sigh of surrender and sat down in a chair next to hers.

The sooner he got this over with the better.

"I think I might have discovered some of the lost pages from The Old Norse Chronicles. Look at this."

In this year, Steinolf proclaims himself king of all the Norselands, following a ten-year reign of terror. Thousands upon thousands of Vikings from Norway, Denmark, and Sweden fall to his sword. Torture and rape abound. The heads of babes are carried on his soldiers' pikes. Goblets of sword dew are drunk by his chieftains. God save us from this heathen beast.

A chill ran up Torolf's spine. His family had suffered much at the hands of this monster. Here was proof that his bloody path had gone way beyond what any of them imagined.

"What does this mean? Why do you show it to me?"

Kirstin got that earnest—some might say rabid—look on her face, the one that meant she wouldn't give up till she got her say. "I know that history can't be changed, that a Hitler and the Holocaust can't be erased. But this history…"

tapped the ancient book, "… no one knows of it but us. Maybe this kind of history can be changed."

"Why me? Our family is safe and happy in America. I thought we decided long ago that revenge wasn't worth the danger." He knew how selfish his words sounded once they left his mouth. This went way beyond his family and vengeance.

Kirstin just stared at him.

"You're right," he said after several long moments of thought. "Someone has to stop the madness."

Navy Lieutenant Torolf Magnusson put his face in his hands and counted silently to ten. Only then did he look up at four of his teammates from Force Squad, Eighth Platoon, SEAL Team Thirteen and say, "Get lost!"

"Not a chance!" his best friend, Petty Officer Justin "Cage" LeBlanc, said with a laugh. LeBlanc was a Cajun from southern Louisiana and the biggest thorn in this sailor's ass when he wanted to be. Like now.

Torolf, who was known as Max to his friends, resumed packing. His sea bag sat on the bed in his apartment in Coronado, California, home of the U.S. Naval Amphibious Base, as well as BUD/S training ground for the Navy's elite special forces unit. He would soon hitch a ride on a military transport to Germany and from there take a commercial flight to Norway.

There was also Ensign Merrill "Geek" Good, a young computer prodigy. Geek was the only ring knocker among them, being a Naval Academy grad.

Cage shoved the duffel bag to the side and lay down on the bed, arms crossed under his head, smiling up at Torolf with exaggerated innocence. Hah! Cage hadn't been innocent since he'd fast-roped down his mother's umbilical cord and out of the womb thirty years ago. Right now, Cage was playing self-appointed spokesman for, this buttinsky bunch who nodded… or grinned… at every blinkin'

thing he said. Even simple stuff, like, "Where you goin', Max? Really?"

"Norway. I've told you that a dozen times."

"When will ya come back?"

"Will ya come back?"

"Against me? I don't know. Hundred to one, maybe."

"Mon Dieu, that defines any terrorist cell in the Third World."

"One in particular who would make Osama and Saddam seem like kindergartners."

Cage frowned. "Who the hell would wanta invade Norway?"

There was a communal rolling of eyes at his evasiveness.

"Well, that settles it." It was Pretty Boy speaking now. "We'll all go with you." While he spoke, Pretty Boy flipped through Torolf's little black book, which sat next to his wallet on the bureau. Torolf grabbed it from him with a snort of disgust. Pretty Boy—who was… well, pretty, according to women from two hemispheres—got enough action already. Then Pretty Boy's words sank in.

"That's debatable," JAM interjected. The Hispanic guy was checking out Torolf's books on a nearby shelf. Torolf read everything from Clive Cussler to his sister Kirstin's romance novels. JAM probably had a dozen versions of the Bible.

ever'one's at the table." He loved to quote his Cajun grandmother's hokey bayou sayings.

"What the hell does that mean?"

"All fer one and one fer all." Cage grinned. "Hey, you guys were there for me and my maw maw during Katrina and Rita." Maw maw was Cajun for grandmother.

how could I do any less… even if ya've lost yer friggin' mind, chèr?"

"Damn cold. Norway is where I come from."

"For chrissake, he's gonna start the Viking bullshit again." JAM might have trained for the priesthood at one time, but he used the language of a sinner.

fact, after 9/11 he vowed to kill "every motherfucker terrorist in the world."

"Guess I'll have to pack my long Johns," Pretty Boy said with a loud sigh of resignation.

"You guys are not going with me," Torolf insisted.

"Those Scandinavian women are supposed to be hot." This from Pretty Boy, of course. "Whoo-hoo! What do I see here?" He waved a long accordion strip of condoms that he'd picked out of Torolf's duffel bag. "Planning a marathon, are you, good buddy? You plannin' to keep all those hot Norse mamas to yourself?"