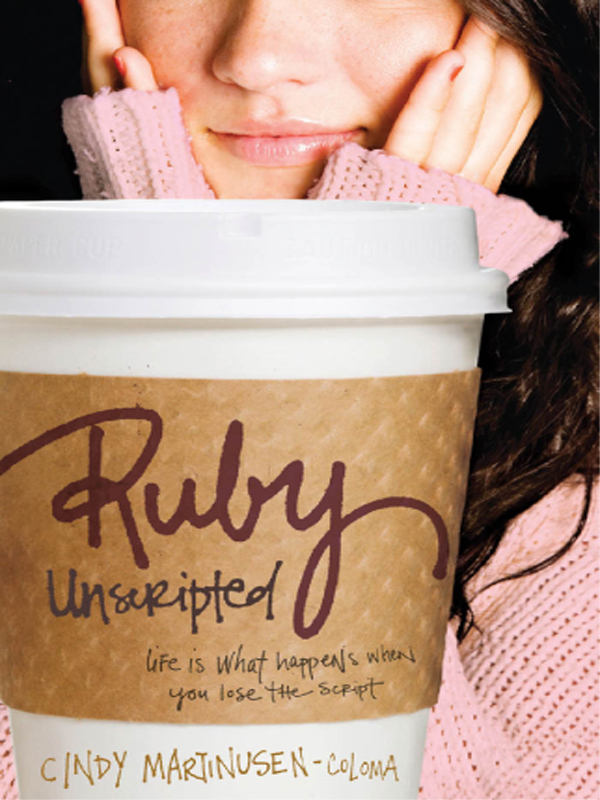 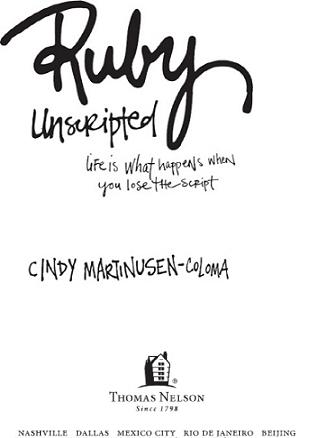 Thomas Nelson books may be purchased in bulk for educational, business, fund-raising, or sales promotional use. For information, please e-mail [email protected]

For and inspired by Madelyn Rose

“
Now
he likes me?” I say aloud as I drop my phone to my lap and my heart does a strange little tuck and roll within my chest.

My ten-year-old brother, Mac, gives me a strange look from the seat beside me. With the top down in my aunt's convertible, he can't hear my words that are cast into the air to dance with the wind.

The orange towers of the Golden Gate Bridge loom toward us, with the darkening blue of sky and water filling the spaces between. Aunt Jenna is driving, with Mom talking beside her.

So it's finally true.

I think I'm happy. Everyone will expect me to be happy. It's not been a secret that I've liked him for . . . well, ever. Or at least for a few months.

And yet I have a very good reason for being completely annoyed about this.

The text stating Nick's indirect admission of love, or at least “like,” arrives as we're leaving an afternoon in San Francisco behind. But we aren't driving the four hours home to Cottonwood. We're driving toward our new life in Marin County.

Everyone at school knew that Nick liked me for a long time. His friends and my friends knew it. I knew it. But Nick apparently didn't know his own feelings. Why can't guys just trust others on these things?

I pick up my phone and reply to Kate's text.

ME:
Is Nick still standing there?

KATE:
No. I think it freaked him out to wait for your response. The guys went to play Alien Hunter III before the movie starts. So what do you think? Patience paid off

ME:
I'm trying not to think that guys arc really as dumb as most of us say they are.

ME:
Really now. I mean NOW. He says this on the day I move away?

KATE:
Well you'll be home most every weekend so it's not
that bad.

ME:
But think about it What made him decide today?

KATE:
Who cares? He finally figured out he can't live without you.

The car cruises along the bridge, and I stare up at the massive orange beams over our heads. Then I catch sight of a sailboat as it dips and bows on the evening waters of San Francisco Bay.

My brother is shout-talking to my mom and aunt. And with one earbud pulled out, I catch bits of the discussion being tossed around the car as the wind twists my hair into knots. The topic is “If you had one wish, what would you wish for?”

What poetic irony. Five minutes ago I would've wished that Nick would like me . . . and like some psychic genie working even before I wished it, the text arrived from Kate: “Nick said . . .”

So Nick likes me
after
I move four hours and a world away.

He likes me the day
after
I say good-bye to him and all my friends in Cottonwood.

I scroll back through my saved texts to find what he sent me after we said good-bye.

NICK:
I wish you weren't moving.

NICK:
Next time you're up visiting your dad let1 s hang out.

NICK:
How often will you be back?

NICK:
So you don't have a date for prom?

So it's like this. I'm moving to one of the coolest areas of CaliforniaâMarin County. I'm going to live in this cool, quirky cottage that my aunt Betty gave us after she headed off on an extended Mediterranean honeymoon with the man, now her husband, she found online.

Since I was a little girl, I've wanted to live near San Francisco. Aunt Betty's house was one of my favorite places. Kate and I plan to attend college down here. So now I get to live my dream sooner than expected.

Mac taps my arm, but I watch the little sailboat lean toward the open Pacific and wonder at its journey ahead, far or near, some California marina or faraway exotic isle.

My brother taps on my arm persistently. “Ruby-Ruby Red.”

I really dislike it when he calls me that. Then he reaches for my earbud, and I push his hand away.

“What?” I ask loudly, wiping strands of hair from my face. The sun falls easily into the cradle of the sea. It's eventideâthat time between sunset and darkness, a peaceful time of wind and bridges and dreams except for one annoying brother and an incoming text that could disrupt the excitement of a dream coming true.

“What do
you
wish for?” Mac asks earnestly.

My phone vibrates again, and I nearly say, “Don't bug me, and don't call me Ruby-Ruby Red,” but Mac's sweet pink cheeks and expectant eyes stop me. I rub his hair and tickle him until he cries for mercy.

He laughs and twists away from my fingers, then asks me again what I wish for.

“Wait a minute,” I say, and he nods like he understands.

KATE:
He said he's been miserable since he said good-bye last night

KATE:
He says he always did, he just kept ii to himself.

ME:
Or he kepi it FROM himself.

Everyone said Nick said I was hot, that I was intelligent, that he'd never met a girl like meâwhich can be taken as good or bad. Everyone told him to ask me out, but he just didn't. No explanation, no other girlfriend, just nothing. For months. Until today.

KATE:
He's never had a girlfriend, give the guy a break. I always thought he'd be the bridge guy! Maybe he will be!

I rest the phone in my hands at that. Nick has been the main character in my bridge daydreamâonly Kate knows that secret dream of mine.

We've crossed the bridge into Marin County with signs for Sausalito, Corte Madera, San Rafael. The names of my new home, and yet I'm still between the old and the new.

“What are you smiling for?” my brother asks.

“Nothing,” I say and give him the mind-your-own-business look.

Mac stretches forward in his seat belt toward the front seat, and I'm tempted to tell him to sit down. But for once I don't boss him around. He's so happy about this wishing talk, with his wide dimpled smile and cheeks rosy from the wind. His cheeks remind me of when I loved kissing themâback when we were
much
younger.

“Remember, no infinity wishes. That's cheating,” Mac shout-says to Mom and Aunt Jenna, but he glances at me to see if I'm listening.

“This is really hard,” Aunt Jenna yells back. She points out the window to a line of cyclists riding along a narrow road parallel to the highway. “I bet those guys wish for a big gust of wind to come up behind them.”

Mac laughs, watching the cyclists strain up an incline.

Now they'll probably start “creating wishes” for everyone they see.

I bet that car wishes it were as cool as that Corvette.

I think the people in that car wish they had a fire extinguisher
for that cigarette . . .

Mom and her sister often make up stories about strangers while sitting outside Peet's Coffee or, well, just about anywhere people watching is an option.

My phone vibrates in my hand, and then immediately again.

KATE:
Hello?? No comment on Nick being your mysterious bridge guy?

JEFFERS:
So beautiful, are you there yet?

ME TO KATE:
I just got a text from leffcrs.

KATE:
LOL He's sitting beside me and saw me talking to you.

JEFFERS:
When can we come party in Marin?

ME TO JEFFERS:
Almost there. Ten minutes I think. Uh party?

JEFFERS:
Yeah, party! How could you leave us, I mean what could be better than us? You'll be too cool for gocarts and mini golf after a month w/ the rich and sophisticated.

ME:
I hate mini golf.

JEFFERS:
See? One day and already too good for mini golf.

KATE:
You're having us all down for a party?

JEFFERS:
Kate's yelling at me. Thx a lot. But bye beautiful, previews are on with little cell phone on the screen saying to turn you off.

ME TO JEFFERSAND KATE:
K have fun. TTYl.

KATE:
Write you after. Bye!

It's a significant moment, this.

One of the most significant in my fifteen years.

Not the “wish discussion” between Mac, Mom, and Aunt Jenna; not the text messaging back and forth; not the music playing in one of my ears; not even Nick liking me.

The significance comes in crossing bridges. Not the bridge in my dream, but the ones that take me into Marin. The many bridges that brought my family here with my dad still in Cottonwood, and my older brother, Carson, driving soon behind us. And though we can turn around and drive back to the small town I've always lived in, I wonder if, once you cross so many bridges, you can ever really go back.

The music in my one ear and the voices of my family in the other make a dramatic backdrop for this momentâone that will shape the rest of my life.

I feel a sense of wonder, but also of fear. It's beautiful, this time of long evening shadows. The sky in the west where the sun has fallen turns from a subtle to defined sunset of red and orange. The hills of Marin County rise to the nighttime with their myriad dots of light. The salty breeze is cool coming off the Pacific.

Many Worlds of Albie Bright by Christopher Edge
Seeking Celeste by Solomon, Hayley Ann
Truly Madly Yours by Rachel Gibson
St Matthew's Passion: A Medical Romance by Archer, Sam
Blood of the Impaler by Sackett, Jeffrey
The King's Hand by Anna Thayer
Nowhere to Go by Casey Watson
Personal Effects by E. M. Kokie
Scars of the Present by Gordon, Kay
The Bricks That Built the Houses by Kate Tempest