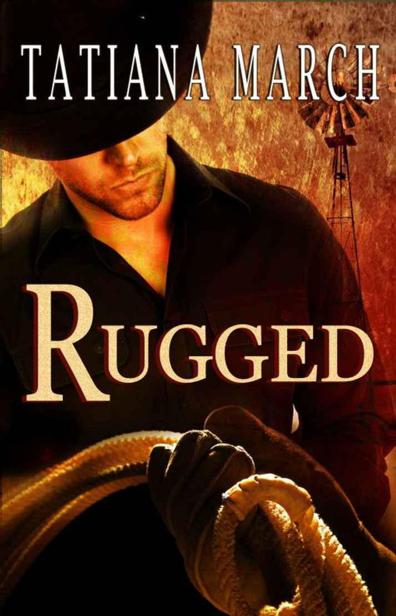 If someone had predicted that at age twenty-eight Rachel James would go into hiding, she’d have told them they were crazy. Breaking the rules just wasn’t her style. But here she was—halfway up a mountain in Wyoming, a month ahead of the ski crowds, in a log cabin borrowed from a man she’d never met.

She’d left behind a condo in Santa Monica, a designer wardrobe, and clients who’d scream blue murder if she wasn’t back when the tax season rolled around. Today, her most important assets were six weeks’ worth of food stashed in the big chest freezer, ten thousand dollars in cash, and a fake driver’s license.

Whatever happened, she would
not
go to jail.

She’d rather go on the run.

Rachel threw the last of the frozen pizzas into the freezer, slammed the lid and straightened to survey the vast open room. Thank heavens the cabin had electric power. The kitchen appliances had to be at least ten years old, but everything seemed to work. In the living area, a pot-bellied stove stood in the middle of the floor. Fortunately, the rustic look was only for show. Modern central heating had been installed. She’d turned it on first thing when she arrived thirty minutes ago. Hot air blew through the vents with a whistling sound, as if the house struggled for breath, but it was forcing the cold into retreat.

She’d taken a tour upstairs and had almost fallen to her knees in gratitude. The black and white marble bathroom with a whirlpool spa might have belonged to a five-star hotel. She hadn’t expected luxury in the wilderness. Maybe the six weeks of enforced vacation would turn out better than she’d feared.

That’s what she needed.

She bounced up the staircase, turned on the bathroom lights and paused to read the instructions stuck to the water heater mounted high on the wall. Good. No need to wait. Just flick the switch and turn on the taps. She set the tub to fill.

Small explosions echoed from downstairs, like a handful of firecrackers going off. The rush of water slowed to a trickle before stopping completely. The ceiling lights flickered and then went out with an angry hiss.

The bathroom pitched into darkness.

Fumbling along the walls, Rachel eased her way to the galleried landing. Dull winter light filtered in through the big picture windows that overlooked the dark forest outside. She hurried down the stairs, tried the wall switches, the toaster, the big flat screen TV.

Worst of all, the big chest freezer had ceased to hum.

Alarm knotted in her stomach. The food was meant to allow her to stay hidden. Everything would start to defrost in the freezer that had barely had time to chill after she’d switched it on. Rachel toured the house. She turned every knob, flicked every switch she could find, even lighting a candle so she could peer into the shadowed corners, but the power didn’t come back on.

Giving up the effort, she set off in search of help.

Outside, the snow was so deep it got into Rachel’s boots as she waded up the hillside in the twilight. She’d flown in with only a tote bag and had stopped at Jackson to shop—fur-lined boots, padded parka, waterproof pants in breathable fabric, and a long suit of thermal underwear. She’d been wearing a sweater and jeans when she left home in Santa Monica, pretending to be going for a morning stroll, and in her tote bag she’d brought an old knit cap and mittens, souvenirs from a teenage trip to Vermont.

It wasn’t enough, but flashing around too much cash might draw attention, and stocking up with food had been her first priority. She’d agreed with Hank that she wouldn’t leave a trail for the authorities to follow.

That meant no calls on her cell phone, no purchases on her credit card.

Hank Goldman, her boss at Goldman and Associates, had booked the rental car with a prepaid voucher and used his credit card to pay for her flight, both in the name of Rachel Goldman, the one on her fake ID. Hank might only be fifteen years her senior, but when he’d ordered her to disappear, he’d taken on the role her father.

It might be nice, finally having a father, even if only a pretend one.

To her right, something howled in the trees.

Rachel froze, then forced her feet back into motion. For God’s sake, she was a city girl. She couldn’t tell the difference between a wolf and a farmyard dog. She gritted her teeth and trundled on. When she reached the frozen tractor tracks, she increased her pace. Up ahead, lights glinted in the soaring windows of the huge timber house surrounded by a cluster of outbuildings.

Try to avoid the rancher. He’s not too friendly.

Rachel shrugged her shoulders as she recalled Hank’s instructions.

Friendly or not, she had no one else to turn to.

Heat from the strenuous climb was making her sweat inside the padded jacket. She undid the zip and clattered up the wooden steps to the canopied wrap-around porch that had been swept clear of snow.

Finding no bell or knocker, she rapped on the door.

She walked along the porch to peer in through a window.

A lean, broad shouldered man stood stirring a pot on an old-fashioned stove. In the center of the room, a table covered with a red and white checked cloth had been laid with a single plate and spoon, and what looked like a glass of milk. An open book and a small radio flanked the solitary place setting.

Assuming he hadn’t heard her knock, Rachel tapped on the window.

A gasp caught in her throat.

Untidy black hair surrounded a hard, angular face, but it wasn’t the fierceness of his features that made her heart leap, or even the scars that ran in three parallel white lines across the tanned skin, from the crest of one high cheekbone down to the curve of his jaw.

It was the anger that burned in his eyes.

Rachel swallowed. She couldn’t be sure if the man could see her in the glow of the light from the kitchen. Was his hatred directed at her in particular, or at all intruders? She had no way of telling. Her hand shook as she raised her arm, tore off the mitten, and pointed toward the front door.

Then he turned back to the stove, pushed the pan from the heat, and walked off.

She rushed to the entrance and waited.

Rachel raised her fist and pounded again, but she had put the mitten back on for warmth, and the thick layer of wool muffled the sound. As she hesitated between going back to look through the window again, and finding some implement to hammer the door with, the timber panel sprang open, almost knocking her down the steps.

The man wore jeans tucked into high boots, and a plaid flannel shirt. Through the open collar, Rachel could see the edge of a muscular chest sprinkled with black hair. By his side, one strong hand curled around the wooden stock of a shotgun. Although the weapon seemed old, it appeared in good condition, and looked like it got plenty of use.

Rachel drew a calming breath and reached for the streak of stubborn her mother had always said was her most annoying quality. “How could you have told me anything if we’ve never spoken?”

“You’re one of the
fashion people
from the cabin.”

If she hadn’t been so nervous of the firearm, she’d have grinned. The man had said
fashion people
with such venom he could have been talking about devil worshippers.

“Fashion people?” She raised her brows.

“Cavorting on my land, nearly naked, copulating like animals.”

“Ah.” Rachel glanced down at the twin barrels of the shotgun and bit her lip.

The cabin belonged to Hank’s brother Melvin, who was a fashion photographer. He’d used the small lake in the forest for a swimsuit feature last summer. According to the rumors when the issue of
La Diva
with the highly suggestive pictures came out, there’d been trouble from a gun-toting local whose moral code had been offended.

Now she knew the gossip to be true.

“I’m never safe from your kind. Climbing up the hill, using any excuse. Car won’t start, the power’s out, got lost in the forest. I don’t have time for women, and if I did, I wouldn’t waste it on sluts from the city.” His mouth twisted into a sneer. “Get off my land.”

“Good God.” She took a step back. “What rock did you crawl up from under?”

He scowled at her. “Why did you come knocking on my door?”

Even before she spoke, Rachel could feel the heat surging to her face. “The power’s out,” she replied in a tight voice.

Silence. The barrel of the shotgun shifted a few inches as the man tightened his hold on the stock. “Get off my land.”

“I have a freezer full of food that will spoil if I don’t get the power on.”

“All right, I’m going.” She backed away, palms raised.

At the bottom of the stairs, she turned and ran, mindless of the roots and rocks hidden beneath the snow. Her heart pounded as she gave in to the fear and anger she’d suppressed when facing the man and his gun. Slipping, sliding, falling down and jumping up again, she hurtled down the hillside, her hands and knees taking a pummeling every time she tripped.

The Doll Brokers by Hal Ross
The Transformation of Bartholomew Fortuno: A Novel by Ellen Bryson
April Shadows by V. C. Andrews
Goldilocks by Patria L. Dunn
The Forever Drug by Lisa Smedman
The Book of the Crowman by Joseph D'Lacey
My Wild Highlander by Vonda Sinclair
Night Huntress 02.5 - Happily Never After by Jeaniene Frost
The Coward's Way of War by Nuttall, Christopher
The Cattle Drive [The Armstrong Brothers of Cedar Creek] (Siren Publishing Classic) by Rebecca Joyce