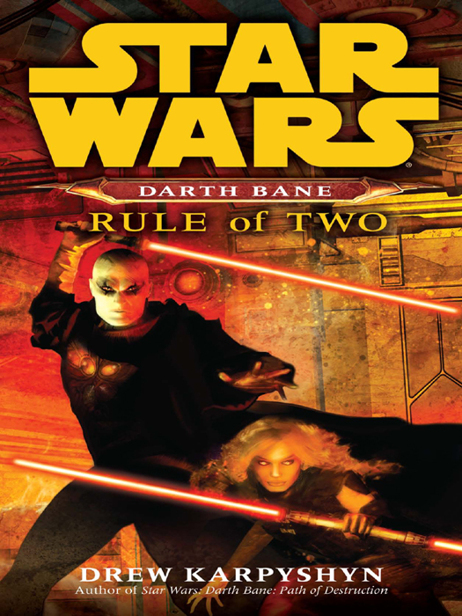 Two there should be; no more, no less.
One to embody the power, the other to crave it.
Now
Darth Bane is ready to put his policy into action, and he thinks he has
found the key element that will make his triumph complete: a student to
train in the ways of the dark side. Though she is young, Zannah
possesses an instinctive link to the dark side that rivals his own. With
his guidance, she will become essential in his quest to destroy the
Jedi and dominate the galaxy.
But there is one who is determined
to stop Darth Bane: Johun Othone, Padawan to Jedi Master Lord Hoth, who
died at Bane’s hands in the last great Sith War. Though the rest of the
Jedi scoff at him, Joshua’s belief that there are surviving Sith on the
loose is unshakeable.
As Johun continues his dogged pursuit of
the man who killed his master, Zannah, faced unexpectedly with a figure
from her past, begins to question her embrace of the dark side. And
Darth Bane is led by Force-induced visions to a moon where he will
acquire astonishing new knowledge and power–power that will alter him in
ways he could never have imagined. 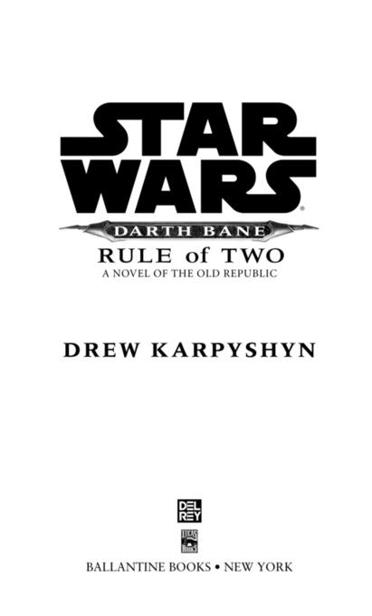 Star Wars: Darth Bane: Rule of Two
is a work of fiction. Names, characters, places, and incidents are the products of the author’s imagination or are used fictitiously. Any resemblance to actual events, locales, or persons, living or dead, is entirely coincidental.

All rights reserved. Used under authorization.

DEL REY is a registered trademark and the Del Rey colophon is a trademark of Random House, Inc.

Originally published in hardcover in the United States by Del Rey Books, an imprint of The Random House Publishing Group, a division of Random House, Inc., in 2008.

To my parents, Ron and Viv,
and my younger sister, Dawn

This book came together in the space of only six months—an unbelievably short time to transform an idea into a finished work on the shelves. I’d like to thank everyone at Lucas Licensing Ltd. and Del Rey Books who was part of this incredible accomplishment, along with a special thanks to my wife, Jennifer. Without her help and understanding I don’t think this would have been possible given the deadlines I was working under. But most of all, I’d like to thank all the fans who bought
Darth Bane: Path of Destruction
. Without your support, this sequel never would have happened. You have my sincere and humble gratitude. 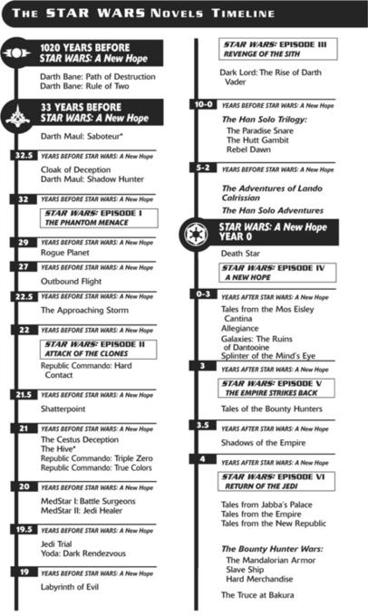 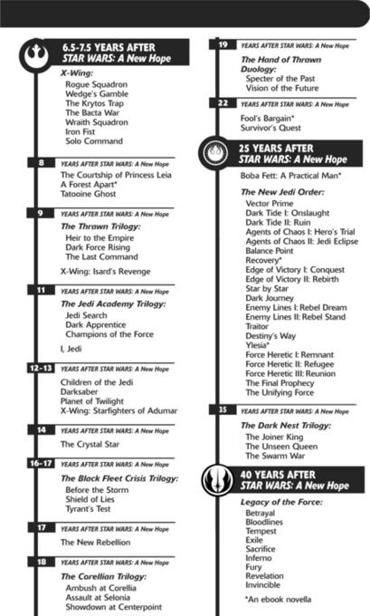 Also by this Author

Introduction to the Old Republic Era

Introduction to the Rise of the Empire Era

Introduction to the Rebellion Era

Introduction to the New Republic Era

Introduction to the Legacy Era

D
arovit made his stumbling way through the bodies that littered the battlefield, his mind numb with grief and horror. He recognized many of the dead: some were servants of the light side, allies of the Jedi; others were followers of the dark side, minions of the Sith. And even in his dazed stupor, Darovit couldn’t help but wonder which side he belonged with.

A few months earlier he’d still gone by his childhood name,
Tomcat
. Back then he’d been nothing more than a thin, dark-haired boy of thirteen living with his cousins Rain and Bug back on the small world of Somov Rit. They had heard rumblings of the never-ending war between the Jedi and the Sith, but they never thought it would touch their quiet, ordinary lives … until the Jedi scout had come to see Root, their appointed guardian.

General Hoth, leader of the Jedi Army of Light, was desperate for more Jedi, the scout had explained. The fate of the entire galaxy hung in the balance. And the children under Root’s care had shown an affinity for the Force.

At first Root had refused. He claimed his charges were too young to go off to war. But the scout had persisted. Finally, realizing that if the children did not go to the Jedi, the Sith might come and take them forcibly, Root had relented. Darovit and his cousins had left Somov Rit with the Jedi scout and headed for Ruusan. At the time,
the children had thought it was the beginning of a grand adventure. Now Darovit knew better.

Too much had happened since they’d all arrived on Ruusan. Everything had changed. And the youth—for he had lived through too much in the past weeks to be called a boy anymore—didn’t understand any of it.

He’d come to Ruusan full of hope and ambition, dreaming of the glory that would be his when he helped General Hoth and the Jedi Army of Light defeat the Sith serving in Lord Kaan’s Brotherhood of Darkness. But there was no glory to be found on Ruusan; not for him. And not for his cousins.

Rain had died even before their ship touched down on Ruusan. They’d been ambushed by a squadron of Sith Buzzards only seconds after they broke atmosphere, the tail of their vessel shorn off in the attack. Darovit had watched in horror as Rain was swept away by the blast, literally ripped from his arms before plunging to an unseen death hundreds of meters below.

His other cousin, Bug, had died only a few minutes ago, a victim of the thought bomb, his spirit consumed by the terrible power of Lord Kaan’s final, suicidal weapon. Now he was gone. Like all the Jedi and all the Sith. The thought bomb had destroyed every living being strong enough to wield the power of the Force. Everyone except Darovit. And this he couldn’t understand.

In fact, nothing on Ruusan made any sense to him. Nothing! He’d arrived expecting to see the legendary Army of Light he’d heard about in stories and poems: heroic Jedi defending the galaxy against the dark side of the Force. Instead he’d witnessed men, women, and other beings who fought and died like common soldiers, ground into the mud and blood of the battlefield.

He’d felt cheated. Betrayed. Everything he’d heard about the Jedi had been a lie. They weren’t shining heroes:
their clothes were soiled with grime; their camp stank of sweat and fear. And they were
losing
! The Jedi whom Darovit had encountered on Ruusan were defeated and downtrodden, weary from the seemingly endless series of battles against Lord Kaan’s Sith, stubbornly refusing to surrender even when it was clear they couldn’t win. And all the power of the Force couldn’t restore them to the shining icons of his naïve imagination.

The Truth About Forever by Sarah Dessen
You Are So Undead to Me by Jay, Stacey
And She Was by Alison Gaylin
Thrown to the Wolves (Black River Pack Book 3) by Rochelle Paige
Flesh: Part Three (The Flesh Series Book 3) by Corgan, Sky
The Missing Chums by Franklin W. Dixon
The Revenge of Captain Paine by Andrew Pepper
Alistair’s Bed by Susan Hayes
Dante Rising: the Birth of a Venator (A Dark Brethren short story) by Tracey O'Hara
Nightwoods by Charles Frazier