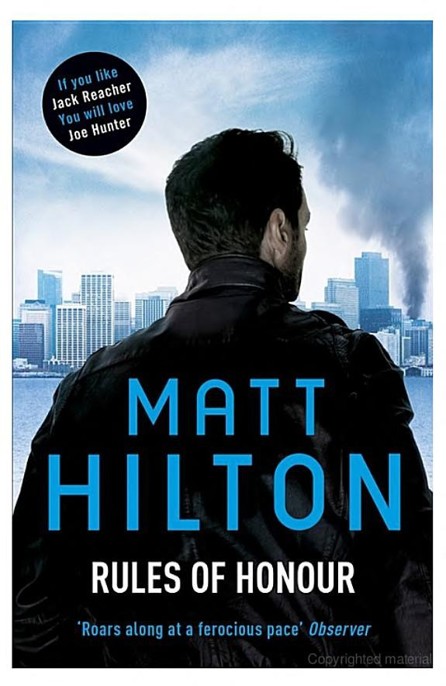 has been asserted by him in accordance with the Copyright,

to real persons, living or dead is purely coincidental

This one is for Jordon

‘No. Just wait until I check things out. Could be just the wind.’

‘That wasn’t the wind, Andrew.’

‘Maybe not, but it’s too early to call the police. Just wait and I’ll go see. If I’m not back in two minutes, call then.’

The woman watched her husband pull a robe over his bulky shoulders, then move for the closet in their bedroom. He opened the door and reached for the top shelf, from which he retrieved a locked box. Inside the box was a relic of her husband’s past. He glanced at her briefly, an apologetic look, but then withdrew the gun that winked dully in the lamplight. Inside the box was a rapid loader, and Andrew fed the six bullets into the gun with precision. Done, he looked at his wife again.

‘It’s only a precaution,’ he whispered, closing the cylinder and latching it tight.

His wife had switched on the bedside lamp, but the rest of the house was in darkness. As he eased open the door and peered into the upstairs hall he pressed his body close to the opening to stop light spill. He paused there a moment, allowing his eyes to adjust to the dark. Then he slipped out into the hall, surprisingly agile for a man of his advanced years. Andrew was a septuagenarian but looking at him most would guess he was at least ten years younger. His height had barely been touched by the years, and he still had the broad shoulders and heavy arms of his youth. His knees bothered him these days, but not now while a bubble of adrenalin coursed through his frame. He went along the hall with the gun held close to his side. He didn’t concern himself with the guest bedrooms or the bathroom because the sound that had woken them had definitely come from below in the living room.

Recently there had been a spate of burglaries in the neighbourhood, the cops putting down the breaking and entries to drug addicts looking for cash, credit cards and items easily pawned. Andrew and his wife, though they weren’t rich, were wealthy enough to attract the attention of a sneak thief. That angered Andrew; he’d worked hard all of his life, even put his safety on the line, to make an easy retirement for him and his wife. No sneak thief was going to take anything from them.

A lifetime ago he’d fought in Korea, had survived the worst that war could throw at him, and for decades afterwards had striven to be the same soldier. He had failed to protect his girl child, who’d succumbed through illness, and one boy following suit with a military career had been killed in the line of duty. So now he was more determined than ever that he would not fail his wife and allow some punk to invade their home and take their lives’ worth. He was old but he’d lost none of his military acumen and thought himself more than equal to a drug-addled thief.

From the head of the landing he peered down the stairs.

Moonlight flooded the vestibule at the bottom, a skewed oblong cast from the window in the front door stretching across the floor. Within the light grey shadows danced, but Andrew recognised them as those of the trees in his garden dancing to the breeze. He took the stairs one at a time, avoiding the third step down that was prone to squeak under his weight. As he descended the stairs he looked for the blinking red light on the alarm box on the hall wall, but it was steady. Whoever had found a way inside was clever enough to dismantle the alarm. Or they knew the code and had turned it off. There was only one other person who knew the code, but he wasn’t prone to dropping in uninvited like this in the dead of night. Alone, the sound they’d heard wasn’t proof that an invader was in their house, but the dead alarm now clinched it. Andrew considered going back upstairs and telling his wife to telephone the police immediately, but something halted him. Pride. Foolish pride perhaps, but he wasn’t the type to run from danger.

Some would have been tempted to call out a challenge, but Andrew knew that it would be a mistake. A desperate drug addict might run for it, but if Andrew had managed to corner him then his desperation might turn violent. Better that he initiated any beating than the other way around. He went down the stairs, paused to check the alarm box and saw that the guts of it had been teased open and a wire clipped on to the exposed workings to form a loop in the system. The alarm had been neutralised, but the automatic signal to his service provider would not have kicked in, as it would if the wires had been merely torn out. If he’d stopped to think for a moment he’d have realised that it was too sophisticated a method for an addict only intent on his next fix. But he wasn’t thinking, he was reacting. Threat demanded action.

He glanced once towards the kitchen but discarded it: a thief would go for the living room where the possibility of rich pickings was greater. He moved along the short hallway and saw that the door to the sitting room was ajar. Always conscious about home safety, fire and smoke being the worst threats to sleeping inhabitants, he was careful to turn off electrical appliances and to close doors tight. He had got it down to a bedtime routine and knew he’d closed that door tightly, as he did every night. He paused there listening. He thought he heard a soft footfall, but it came from above, probably his wife. Placing a fingertip to the door, he teased it inward, the revolver held steady against his hip. Then without warning he shoved the door hard and stepped quickly into the room, sweeping the familiar space for anything alien.

There was nobody to be seen.

If not for the jerry-rigged alarm he’d have thought he’d been mistaken, that the noise that woke him was nothing but wind throwing the garden furniture around the yard. He wondered if the burglar had heard him as he’d risen and had made himself scarce. But in the next instant he knew that he was wrong.

A cold metallic tickle behind his right ear made him halt.

Andrew nodded slightly, a minute movement because he didn’t know how hair-triggered the gun pressed to his skull was.

‘Mine’s bigger than yours,’ whispered the voice over his shoulder. ‘I suggest you drop that old revolver and kick it back to me.’

‘OK, son, take it easy now.’ Andrew lifted the revolver and flicked the latch to open the swing-out cylinder. He rattled the gun and allowed the shells to tumble out and clatter on the hardwood floor.

‘Not good enough.’ A fist was jabbed into Andrew’s back, directly above his left kidney. Pain flared through the old man, sending a white flash across his vision. ‘Now, as I said first time, put down the gun and kick it back to me.’

‘It’s useless,’ Andrew said, desperate not to relinquish the weapon having placed some spare rounds in his robe pocket.

‘Is it?’ The man clubbed Andrew across the back of his head and sent him sprawling into the living room.

As he fell the revolver was knocked from Andrew’s hand. In the seconds afterwards it didn’t matter because he used both hands to cover the split in his scalp. ‘Son of a bitch.’

‘You see,’ the man said. ‘Even an empty gun can be a good weapon.’ He levelled his semi-automatic handgun on Andrew’s chest. ‘Not that mine’s empty.’

Andrew struggled up to a seated position, grabbing at a settee for support. He could feel blood trickling through his hair. He looked up at the man, squinting to try to make sense of the face.

‘Who the hell are you? What do you want?’

One thing Andrew was sure about: this was no addict looking for a quick payday. The man was large and solidly built, dressed in black jeans, black jacket and a black baseball cap. Backlit by the meagre moonlight in the hall he looked like a living silhouette.

‘If I answered your first question, you’d probably guess the second.’

‘That’s good, son, because I’m old and haven’t worked in years, I don’t have much to get by on.’

‘Save it,’ said the man. ‘You’re wasting your time trying to make conversation. I know what you’re trying to do: humanise yourself in my eyes, making me think twice about doing you harm. You’re wasting the few breaths you have left.’

Andrew was thinking clearer now and studied his surroundings for a way out of this. He didn’t like what the man had just said, it sounded like he had only one agenda. No way was Andrew going to sit on his ass and offer his would-be killer an easy ride. He thought of his wife upstairs and knew that she’d be next, but not if he did enough to alert her to the danger, and slowed the bastard down. He looked for something to use as a weapon.

‘Don’t even think about it.’

Andrew returned his gaze to the man. He’d stepped inside the room and was looming over Andrew. The gun was held steadily, the barrel aimed directly at Andrew’s face. ‘I want you to know why I’m here, why I’m about to kill you. It’d be a shame if I had to put a bullet through your skull before I showed you this.’

From his jacket pocket the man took out a cellphone. He’d readied it beforehand, and he held out the glowing screen so that Andrew could see the photograph on it. Andrew screwed up his eyes to help focus the picture and saw that in fact it was a photograph taken from one much older. The image was of a man in uniform, sepia in colour. It was many decades since Andrew had seen that face but he recognised it and knew who this man might be.

Against the Wall by Rebecca Zanetti
The Heat of the Moon: A Rachel Goddard Mystery (Rachel Goddard Mysteries) by Parshall, Sandra
The Challenge for Africa by Wangari Maathai
Bewitching The Alpha (Hex My Heart, #3) by Talina Perkins
Night’s Edge by Barbara Hambly
The Orpheus Descent by Tom Harper
The Subtle Serpent by Peter Tremayne
Keeping Watch: Heart of the Night\Accidental Bodyguard by Wilson, Gayle
Memoirs of a Hoyden by Joan Smith
Bride For My Werewolf Boss by Fox, Abby