Read Rumble on the Bayou Online

Rumble on the Bayou 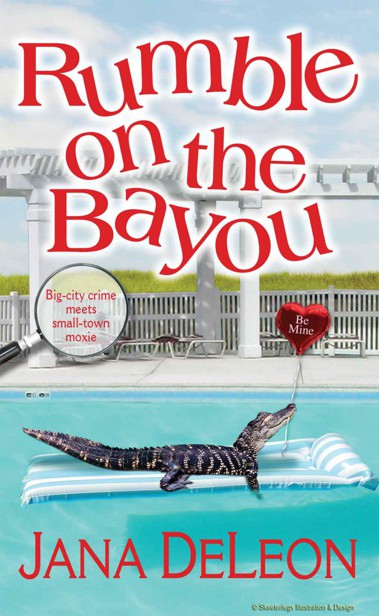 Rumble on the Bayou

(originally released in print in 2006)
All rights reserved. Without limiting the rights under copyright reserved above, no part of this publication may be reproduced, stored in or introduced into a retrieval system, or transmitted, in any form, or by any means (electronic, mechanical, photocopying, recording, or otherwise) without the prior written permission of both the copyright owner and the above publisher of this book.
This is a work of fiction. Names, characters, places, brands, media, and incidents are either the product of the author's imagination or are used fictitiously.  The author acknowledges the trademarked status and trademark owners of various products referenced in this work of fiction, which have been used without permission. The publication/use of these trademarks is not authorized, associated with, or sponsored
by the trademark owners.
Kindle Edition License Notes:
This ebook is licensed for your personal enjoyment only. This ebook may not be re-sold or given away to other people. If you would like to share this book with another person, please purchase an additional copy for each person you share it with. If you're reading this book and did not purchase it, or it was not purchased for your use only, then you should return to amazon.com and purchase your own copy. Thank you for respecting the author's work.

"This day just keeps getting better." Deputy Dorie Berenger stared at the alligator in front of her. It had to be the swimming pool.

And trouble was just what they had.

Maylene Thibodeaux bulged out of a lawn chair next to her pool's cloudy water, jug in hand. She wore a pink bikini and was sitting in stoned silence. Which was rare when you considered her usual mouthiness, but understandable since it was almost evening and she had probably been at happy hour since before noon.

Dorie stepped right up to the pool's edge and studied the alligator more closely. He was a good-sized one, probably ten or twelve feet and currently floating like the dead in the center of the pool, with what looked like a backpack hanging out of his mouth. His eyes were half-closed, as if he would drop off into sleep at any moment.

"What do you think?" asked Deputy Joe Miller. Joe had been the first to arrive at Maylene's, but had immediately called for backup. This one was definitely out of his league.

Dorie blew out a breath. "I think this is not my usual fare. What about Curtis? This is his specialty."

"I tried. He's still on a call at the shrimp house. Turned out to be three gators instead of just one."

"Damn it, Joe, that's four times this month. Did Buster get those traps repaired?"

“
Man, I'm charging him this time. The taxpayers aren't paying us to keep his shrimp house running, and trappers like Curtis don't come cheap."

"I agree," Joe said, "but what about the problem we have here?"

Dorie sighed and tossed a sideways glance at Maylene, who was working her jug like a prizefighter with a water bottle. "How much homemade wine has Maylene had?"

"She was drinking when I got here."

It figured. Maylene Thibodeaux was hard enough to please sober. Drunk was a whole different story. "You didn't let her give you any, did you? That stuff's worse than drugs." And it seemed to produce the same kind of hallucinations. In the past, they'd been called out for everything from aliens in her garden to unicorns in the bedroom. Dorie had been slightly surprised to learn the gator was real.

Dorie smiled. Joe was probably right. Maylene Thibodeaux had been making her own stash since she was a little girl. Rumor had it Mr. Thibodeaux had behaved oddly and had a strange tone to his skin on the day of their wedding thirty-five years ago. Folks around town said his skin was the same exact color when they buried him six months ago, making Maylene the most patient hunter in the parish.

It had taken her only minutes to trap her prey, but thirty-five years to kill it.

Maylene's ears must have been burning because suddenly she came alive and rose from her chair. Actually, the chair rose a bit with her, and there were a couple of seconds of detachment necessary. Then she glared at Dorie.

"Damn it," she said. "I did not have this expensive piece of concrete put in to swim with the gators. I could go down to the bayou to do that. And I'm at least a mile from any water whatsoever." She hiccupped and staggered a little toward the edge of the water. "What the hell is this one doing in my pool?"

Maylene shook a finger at her. "Don't you get smart with me, young lady, or I'll have a talk with your daddy." She pointed back at the gator. "Now, just what are you going to do about that?"

Dorie squatted for a moment and assessed the situation. At five-foot-ten, she towered over most of the women in Gator Bait and a whole heck of a lot of the men. Sometimes getting an eye-level look at things was the first order of business. She noticed, however, that all six-foot-four of Joe didn't feel compelled to hunch down on the cement with her, but then, standing at the edge of the pool was probably much closer than he ever wanted to be.

"You poked him with the cleaning brush, huh?" she asked Joe as she rose.

He nodded. "Not a peep. If I didn't know any better, I'd swear he was drunk." They both looked at Maylene.

"Maylene, you didn't put any of your special brand in the pool, did you?" Dorie asked.

She looked offended. "Why, I'd no more waste the good stuff on a dumb animal than I would a woman."

Dorie glanced over at Joe, who tried not to smile, then grabbed the pool-cleaning brush and pushed on the gator's side. His body moved a couple of inches across the water, but only because she was pushing, not because he was helping. She shoved again. Still nothing. He seemed perfectly content to be propelled through the pool.

Dorie looked at Joe, who shrugged. "Got me," he said. "I ain't ever seen anything like it."

She continued to push the gator until he was next to the far wall, then crept around the pool, first tapping his tail with the brush and slowly working her way up to his head. When she got to the front, she poked him square in the nose. He didn't even flinch.

Dorie leaned the brush against a patio table and grabbed the long blond ponytail hanging halfway down her back. Twisting it in a knot, she secured it at the nape of her neck with a pen and rolled her sleeves up over her shoulders. Her usual "uniform" of jeans and a T-shirt would be able to withstand a splash of Maylene's pool water, but she didn't even want to consider what it would take to wash the slimy substance out of her hair.

Hair and clothes securely in place, she reached down and pulled on the backpack, but it didn't budge. "Damn. He's got it locked in his teeth."

"I hope he ain't got whoever was wearing it locked in his belly," Joe said.

Dorie shot him a derisive look. "Joe, you know we would have heard by now if someone's angel hadn't made it home from school. Besides, I haven't seen a kid around here actually carry one book, much less a whole sack of them."

Joe rubbed his forehead and nodded. "So what are we going to do?"

She studied the gator again. "Well, first I'm going to try and pry his mouth open with one end of the cleaning brush. Given his altered state, it might work. Then, I'm going to get the backpack out."

Maylene jumped up again, chair still attached. "Wait a minute," she yelled as she lumbered back toward her house, the piece of lawn furniture trailing with her, swinging from left to right. "I gotta get my camera for this one."

The chair popped off Maylene's rear as she hurried between the stair railings and up to the house. She was back a minute later, camera in hand. "Okay. Do your stuff," she said, looking excited for the first time since Dorie had arrived.

"Be careful, Dorie," Joe said from the other side of the pool. She noticed he didn't offer to come any closer.

Knowing it was now or never, she made the sign of the cross and picked up the cleaning brush again. She gently inserted the pole into the gator's mouth right beside the backpack, then pushed down on the pole, prying his mouth open. To her utter amazement, it worked, and the lethargic animal still hadn't twitched.

Reaching down slowly, she carefully lifted the backpack from between the razor-sharp teeth, Maylene clicking furiously on her camera the entire time. Dorie rose swiftly with her prize and received cheers from Joe and Maylene.

Backing a few steps away from the pool, she opened the pack. "I think I found our problem," she said and pulled out a handful of wet plastic bags containing a white substance. She opened one baggie, dipped a long nail into the powder and tasted it, then made a face and spit into the grass next to the pool. "Heroin. He's higher than an eighties rock band."

Joe stared at her in obvious surprise. "Heroin! We ain't ever had no problem with drugs in this town. Well, I mean, except weed."

Dorie nodded and began to dig in the pack again. "I know. That's what makes it so interesting" She piled more bags of heroin on the patio table, then brought out a wad of wet money. "Hundreds. It's all hundred-dollar bills, and there's more in the bottom of the bag."

She looked back at the gator. He still rested peacefully, his mouth propped open with the cleaning brush. She bent down and studied him again just to make sure she hadn't missed anything.

"Shame everything got wet," Joe said. "We-probably can't get prints off anything."

Dorie nodded in agreement, then caught sight of something at the tip of the gator's mouth. It was small and cylindrical. About three inches long. "You got any salad tongs?" she asked Maylene.

Maylene put her hands on her hips and pursed her lips. "You're not putting my salad tongs in that thing's mouth"

Dorie looked at the woman's round figure. "Maylene Thibodeaux, when was the last time you actually ate a salad?"

Maylene glared for a moment, then started toward the house again, stomping as she went.

Dorie shook her head. "I'm not completely sure. That's why I want to check."

Maylene returned shortly with the salad tongs. She handed them to Dorie who squatted back down next to the Bator and gently put the tongs into his mouth, clamping down on the object and pulling it out. Taking a brief look, she smiled. Joe had finally gotten up a little nerve and crossed to her side of the pool, although he still stood several feet away.

Dorie tossed the object at him. Reflex made him catch it, but when he looked down and saw what he held, he immediately dropped it.

She smiled. "Guess we can run that print now."

It took Dorie and Joe another two hours and a little help from Billy's Heavy Equipment Service to get the alligator out of Maylene's pool and back into the bayou. As they lowered him next to the water, the gator finally started to come down off the high. He began to thrash and immediately broke the duct tape around his mouth. Billy hit the release button, and the gator fell the remaining foot or so to the ground and hightailed it into the murky water.