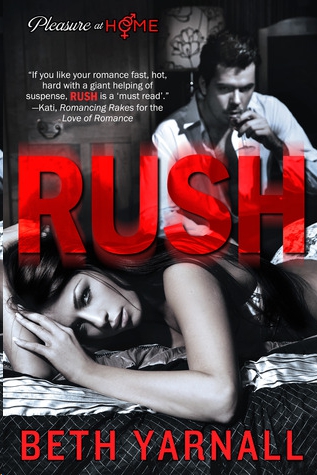 Someone is stalking Miyuki Price-Jones.

As the host of a very successful home shopping TV show that sells adult toys, Mi has become the object of an ex-con’s obsession, requiring the services of ex-Navy SEAL turned bodyguard, Lucas Vega. As the attraction between Lucas and Mi grows, Lucas has a difficult time keeping his feelings for Mi separate from his mission to keep her safe. A mission that is more challenging than anyone could have predicted.

Damaged by their pasts, Lucas and Mi find more in common then they could have imagined and secrets they thought would tear them apart could be the ties that bind them together forever. But with the stalker growing bolder, Lucas and Mi must learn to trust each other or risk losing more than their hearts.

One of them could lose their life.

To my husband, Mr. Y, for buying into and supporting every single one of my crazy Lucy and Ethel schemes…including the one where I thought I could write a book.

“Davy!” Crosby yelled from somewhere in the darkened television studio.

The young man in the corner jumped, then shuffled over to the man sitting in a faded director’s chair. “Yes, Mr. Crosby?”

“Your job is simple. Put the batteries in the toys, test them to make sure they work and don’t give me a reason to kick your ass all the way to Tuscaloosa!” Rob Crosby, the director of the adult home shopping show,
Pleasure at Home
, pinched the bridge of his nose.

“Or more likely Davy is an incompetent idiot who couldn’t find his own ass with both hands and a map!” Crosby shouted. Crosby was always shouting. It had taken Mi three weeks to stop flinching every time he opened his mouth. Crosby turned on Davy. “Did you even
put
batteries in it?”

Without wavering his glare at Davy, Crosby barked, “Check it, Mi. And so help me Davy.” Crosby pointed a finger at the young man. “If four double A’s don’t pop out the bottom of that thing your ass is grass.” Someone’s ass was always grass or otherwise in jeopardy with Crosby.

Crosby threw the sheaf of papers in his hands, sending them floating down around him. “God damn it! Somebody get me some goddamned batteries that work! Of all the incompetent, backwoods, inbred—”

“Crosby?” Mi interrupted. “Why don’t I just take the batteries from one of the other—”

“Davy can do it!” Crosby stood up. “Take five, everybody. When I get back every single one of those goddamned things better work. Or your ass is hitting the pavement. Hear me, Davy? And somebody pick up those goddamned papers.” He turned and stormed off in the direction of the studio offices. “Mi! With me.”

Mi handed the Multiple O to Davy with a mumbled apology. Even though there was often no good excuse for Crosby’s bad behavior, she still felt like she had to apologize for him.

Davy waved it off as most did when she made the gesture, his long blond hair hanging like a curtain as he bent over his task. “Ain’t your fault, Miss Mi. Better catch up before he starts threatenin’ you, too.”

Mi turned to follow Crosby and caught sight of a man she’d never seen before, standing against the wall just out of the reach of the stage lights, his face fully shadowed. He was large, well over six feet tall and as broad as a doublewide. Something about the way he stoodstill, yet humming with energy caused an answering rhythm to thrum from deep inside her. Her pulse kicked up, generating a near fight or flight sensation that sent her senses into overdrive. Who was he? What was he doing here?

She jumped, her focus flickering to Crosby, then back to the man. “Coming,” she answered, keeping her gaze on the man.

She rounded the end of the stage opposite him and stepped down. The man made no move, but she knew he watched her. Turning down the hall after Crosby, she should have felt relieved to be out of the man’s sight and yet she instantly missed the extra beat his attention had caused.

Crosby sat at his desk, pulling a long drink from the flask he kept in his bottom drawer. He wiped away the bright pink drop from his bottom lip, but not before Mi had seen it. He thought he was fooling everyone by putting stomach medicine in a container meant for alcohol. And he was. Everyone, but Mi.

He looked up at her with blurry, red eyes. “Third time this week.” He held up a hand. “Before you say it, I know. It’s not Davy. But goddamn it, I hate this shit.” He leaned back in his chair and waved for Mi to sit down, so she did. “The police don’t have one single lead and I know you’re not going to like it, but Sellers hired you a bodyguard.”

She opened her mouth to protest, but was cut off.

“Goddamn it, don’t fight me on this. It’s a done deal. With Lucy out on maternity leave, you’re all we’ve got. And there’s no way Sellers is going to stop shooting the show for one single goddamned day. You got me? You’re cash in the bank. Ratings haven’t budged an inch since Lucy got too big to hock dildos, proving you’re the real draw, not her.” He waved an idle hand around. “Must be that ancient Chinese secret thing or something. Hell, I don’t know. All I know is that Sellers protects his investments and right now, you’re investment number one.”

Mi would have corrected him that she was one-quarter Japanese and not at all Chinese, but she knew he didn’t care. That wasn’t the point. A bodyguard. She didn’t like the sound of that. A bodyguard meant real danger and she didn’t think a handful of threatening letters and one or two random acts of vandalism warranted a rent-a-cop.

“But Detective Rolls said it was probably a couple of over zealous members of that religious group, C.A.L.M. Unless something’s changed that I don’t know about.” She searched Crosby’s face and instantly knew she hadn’t been fully informed. “What aren’t you telling me?”

“Shit.” Crosby dropped his gaze to a paper on his desk, pausing for a moment like he was making an important decision. “I don’t want to scare you, kid, but I suppose you’d find out about it sooner or later.” He lifted the top couple of papers, then carefully slid out an envelope and handed it to her. “These are copies of what was handed over to the police.”

Mi didn’t comment on how much his hand shook when she took the envelope from him. That small tremor sent her nerves jangling. If Crosby was this upset over what was inside the envelope, then it had to be bad. Very bad.

She braced for it, but the reality of what she had to face was worse than she ever could have imagined. She flipped through the photos, one after the other, caught by the snippets of her life that had been well documented on film. Her unlocking her car in front of her house, in the produce section of the grocery store, in line at the dry cleaners, sitting in a church pew, holding a box of tampons in the drug store, having lunch with Lucy. And the final one—the one that had her clutching at her chest—was of her and her mother, feeding the ducks in the park under a hot Texas sun with the baby stroller parked close by.

She looked up to find Crosby watching her closely. “Are you okay, kid?”

She shook her head, unable to form the words she had for the emotions welling up inside her, trying to claw their way out.

“In that case, let me introduce Lucas Vega. Your bodyguard.”

She jerked in surprise, turning her head to the side, then up, way up. That low hum started again at the sight of the still man from the studio. He stood feet above her, looking down at her with no emotion. Certainly, nothing like the sensations clanging around inside her caused by his nearness. He was dark, like a shadow, dressed in all black with black hair and near black eyes. And not at all handsome. Which strangely made him more attractive to her.

Mi clutched the photos tighter. “No.”

“Sellers owns this station and all our asses. There is no ‘no’.” And then Crosby said something he avoided as though it gave him a violent rash. “Sorry, kid.”

She knew there was no way out. Those two simple words sounded with a thud in her head, like a trunk lid closing with her inside.

Lucas wasn’t sure what to say. Miyuki Price-Jones off camera was nothing like he’d thought she’d be. First off, she was small, too small, looking more like a teenager than the twenty-eight her file said she was. He knew she wore the glasses for the sex-kitten effect on the show, but what the file hadn’t said was what a strange color her eyes were, gold, like an old coin.

The file also hadn’t said anything about her having a kid. He wondered why. It wasn’t like her reputation would be compromised. She sold sex toys for fuck’s sake. Something told him that her having a kid would add a complication he wasn’t sure he wanted to deal with. Must have been why Cal Sellers had left that bit of information out of the file. And why Lucas would look into it as soon as he got the chance.

She didn’t speak or pay him any attention at all as she shoved the photos back into the envelope, her movements jerky and rushed. Then she sat there, holding the envelope, staring at it as though she didn’t know what to do with it.

She jolted at his question, spinning in her chair. She eyed his outstretched hand as if he’d strike her with it. That thought made him frown.

She clasped the photos to her chest. “No.”

He withdrew his hand, disguising his uneasiness at her reaction to him with a careless shrug. He was used to people making judgments about him. Usually he spun those misconceptions to his advantage, but for some reason her negative assessment of him rankled. He told himself it was better this way. Her discomfort meant she’d take direction from him if things got bad. And that was good.

“I didn’t mean to be rude.” She indicated the pictures. “It’s just that these are personal.”

She frowned down at the envelope. “Oh.”

“And please, call me Lucas.”

“Lucas.” She said it as if she were trying it out to see how the letters felt on her tongue. Which brought his attention to her mouth and its fullness. Her tongue darted out, leaving her lower lip wet.

Tartarín de Tarascón by Alphonse Daudet
The Belief Instinct: The Psychology of Souls, Destiny, and the Meaning of Life by Jesse Bering
Elusive Passion by Smith, Kathryn
Partner In Crime by J. A. Jance
Shadows of Bourbon Street by Deanna Chase
THE LUTE AND THE SCARS by Adam Thirlwell and John K. Cox
Hypnotized by Lacey Wolfe
Murder on Show by Marian Babson
Everybody Has Those Thoughts So It Doesn't Mean You're Gay by Cristian Youngmiller
Warrior's Princess Bride by Meriel Fuller