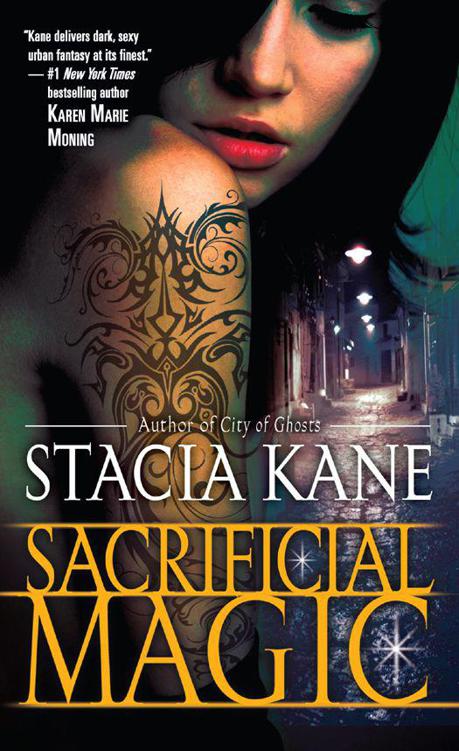 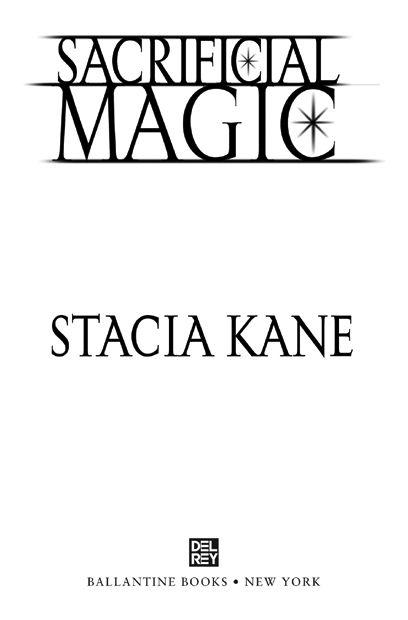 Sacrificial Magic
is a work of fiction. Names, characters, places, and incidents are the products of the author’s imagination or are used fictitiously. Any resemblance to actual events, locales, or persons, living or dead, is entirely coincidental.

Published in the United States by Del Rey, an imprint of The Random House Publishing Group, a division of Random House, Inc., New York.

Had the roof over her head not been a broken mess, shredded insulation and pieces of tile dangling like the rotting innards of the living thing it had once been, she wouldn’t be getting hit on the head with cold droplets of water at odd, annoying intervals.

That would have made her happier. Or at least not quite as unhappy. Nothing could have made her
happy
at that moment, when she was about to wander down a dark hall where a ghost lurked and hopefully manage to freeze it before it sliced off her head or stabbed her or whatever the hell else it planned to do. The odds of a ghost in this corpse of a building not having a weapon were—well, hell, there were no odds at all. Only the dumbest ghost on the planet wouldn’t have found some sort of weapon in this ramshackle palace of destruction, where her boots sloshed through a good two inches of foul water, broken glass, metal shards, pulped books, and who the fuck knew what else.

“Think it’s in there, Chess?” Riley Martin, a brand-new Debunker, pointed toward the mouth of the hallway ahead. In there the ceiling had apparently maintained its integrity; the hall was only shadows, a dark tunnel
straight to the grave. Or rather the Crematorium, and the City of Eternity. None of which really sounded like a fun way to end her evening.

But neither did leaving the ghost here to kill other people, or telling the Church she’d decided to fuck off to the bar instead of doing her job. “Probably. No, don’t turn your light on yet. Try not to if you can help it. Let’s go stand right inside until our eyes adjust, okay?”

Riley nodded. Chess followed him, neither of them bothering to keep their movements quiet. If they could somehow attract the spirit, draw it out, that would be easier and safer. The last thing either of them wanted to do was to walk into some kind of ambush.

Fucking Lamaru. Fucking Arthur Maguinness-Beldarel shithead. If they hadn’t played their stupid power games and set a bunch of ghosts free the month before, she wouldn’t be out here doing something that technically wasn’t her job but that every Church employee capable of doing it had to do at least one night a week when they weren’t otherwise engaged or on a case.

Which Chess wasn’t. Damn it.

They stopped in the shadows; the almost imperceptible breeze hadn’t penetrated there at all, so the horrible ammoniac stench, full of mold and worse, assaulted her nose the second they entered the hall. Her eyes stung.

But more than that, a warm tingling sensation began crawling up her arms and across her chest as her magical tattoos reacted to the presence of a spirit. A ghost was definitely nearby. She looked at Riley. “Are you feeling it?”

“I— I don’t know. My skin feels kind of funny.” What little of his face she could make out didn’t look happy.

Riley’s breath caught. This was the time that, if she was a normal sort of person, she’d be able to say something reassuring and at the same time cool, the kind of thing that would make Riley feel brave but not patronized. And then they’d both sort of smile and head off down the hall to Banish that ghost.

But she was not that kind of person, and the last thing she had any idea how to do was reassure Riley and make him feel good about himself. Cliché was probably about the best she could do.

“You’ll be fine,” was the one she gave him, and to her surprise it seemed to work. “Come on.”

Every step they took, every slow step through the soup of bacteria and rot sucking at her boots brought them closer to that faint death-glow. She’d mixed some graveyard dirt and asafetida earlier, stuck it in a bag in her pocket; now she reached inside and grabbed a small handful. Ready.

They moved a few steps in silence broken only by the occasional
plonk
of water dripping from the ceiling behind them. Something rattled. Chess spun around to look but saw nothing.

Ghosts weren’t the only things that might hang out in abandoned buildings at night. They weren’t in Downside, no, but they weren’t exactly in the nicest area, either. This building, which had once housed offices of some kind and a warehouse, stood just a few streets into Cross Town, a whole city block of condemned cement with a ten-foot chain-link fence around it.

A chain-link fence with holes in it. She wondered how many neighborhood kids had made this their weekend hangout until two nights before, when one of them met a gruesome death just inside the front doors.

Another tiny glimpse of light.

“It is a ghost, right?” Riley whispered. “I mean, I feel
like there’s a ghost here, but could that be something else?”

“It could be anything else. But it’s probably a ghost, yeah.”

The comforting weight of her knife sat in her pocket. Debunkers weren’t supposed to be armed. Fuck that. She’d rather take her chances with Church discipline than with anyone or anything she might come across in a place like this.

She probably wouldn’t need the knife anyway. Damn it, the kid’s nervousness was making her twitch, and as much as she sympathized with him she really didn’t need that at the moment. It had been a good two hours since she’d taken her pills, and while she still had time—she wasn’t worried—places like this didn’t help her keep calm. All that filth, all those germs, soaking into the bottoms of her jeans, brushing against her skin, her hair, invading her lungs. People caught diseases from places like this, especially after a rain.

Or they got their throats sliced open by ghosts armed with rusted shards of metal or whatever the fuck else. She edged her way down the hall, her back pressed against that gross excuse for a wall just because she couldn’t really see well enough to walk down the center. The glow got stronger with every step. Her fist clenched around the dirt.

Another
plonk
. Another rattle. Something like a whisper, that could have been a voice or the sound of a makeshift blade leaving its sheath of soaked pulp or crumbled cement. The glow from a doorway another ten feet or so down the hall.

In its reflection, Riley’s face looked even paler. The only thing keeping hers from looking the same—assuming it didn’t, which she was just going to go ahead and assume—was the fact that she was still just high
enough to be not quite as scared as she should be. And the fact that she was an absolute fucking expert at lying to herself.

But with every step closer to that glowing doorway, that ability drew just a tiny bit farther away from her.

Whatever. Wasn’t like she could just turn around and run. So she took one last deep breath and spun around the doorframe with her arm ready to throw the dirt at the first dead thing that moved.

And found herself staring at three teenagers, who were obviously very alive, and who obviously thought they’d done something very clever, and who should have been thanking the gods who didn’t exist that Riley was there too because if he hadn’t been she would have been
very
tempted to beat the shit out of them with the nearest heavy object.

“What are you doing here?” Riley asked, but it was obvious from the stunned looks on their faces. Whoever they’d been expecting to walk through that door, it wasn’t two Church employees.

One of them glanced at the other two, and cleared his throat when they didn’t speak up. Fucking cowards. “We, uh, we thought you were some friends of ours.”

Damn it, why were her tattoos still tingling, if a ghost wasn’t in this room? This didn’t feel right, not at all. She needed to get those little bastards out of there as quickly as possible. “You need to leave, okay? Time to go.”

“We’ve been in here for like an hour,” the kid replied. The flashlight he’d hidden under his dark-blue jacket still glowed, made him glow. That’s where that bluish light had come from, she guessed, but nothing about these kids should have been setting off the alarms in her tattoos. Something else was around, waiting. “We haven’t seen anything.”

“Oh, right. That must mean nothing is here. This is
such a small building.” She stepped sideways from the door; Riley, she was pleased to see, had already taken a step back into the hall. “Go on, get out of here.”

“But we can help you,” the first guy started.

Started, but didn’t get to finish. Because before the last word hit the air, the ghosts—who’d clearly been waiting for just this sort of noisy fun—slipped through the walls. Four of them.