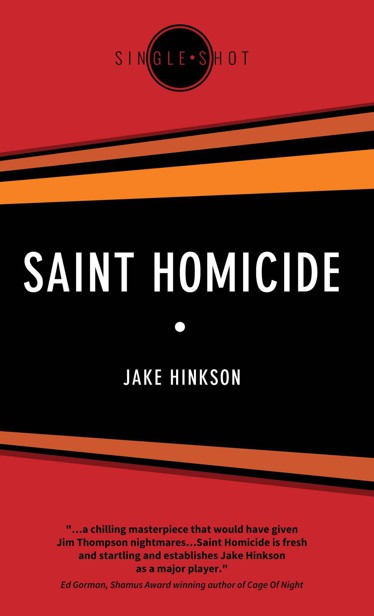 All rights reserved. No part of this book may be reproduced or transmitted in any form or by electrical or mechanical means including photocopying, recording or by any information storage and retrieval systems without the written permission of the publisher, except where permitted by law and for purposes of review.

This book is a work of fiction. Names, characters, places and incidents are the products of the author’s imagination or are used fictitiously and any resemblance to actual events or persons, living or dead, is entirely co-incidental.

My fellow inmates find me ridiculous. To a man, each proclaims his innocence, and every one of them eagerly details the series of injustices which led him to his present incarnation. I alone freely admit that I am guilty of my crime, and I alone embrace my supposed punishment. For these transgressions of prison decorum, the other prisoners mock me as a fanatic and have bestowed upon me the nickname Saint Homicide.

Their mockery is of little concern to me because, as Paul wrote, as my sufferings in Christ abound, so my consolation also aboundeth by Christ. Still, as I await His Final Judgment, when the false “justice” of this world will burn away in the light of His Glory, I feel that I must give an accounting of myself. I must set some things straight. This will not be a defense, though. I need no defense. This is a testament to the glory of Christ.

Before I begin, I feel compelled to point out that I will be fully forthcoming in this narrative. As such, the reader should be forewarned that I will be honestly transcribing blasphemies, rough language, and ugly situations exactly as they occurred. Please understand that while recounting this ugliness gives me no joy, my journey to the cross was a dark and twisted one, and I have come to understand that this darkness only makes His glory shine more brightly.

My journey began years ago, on the late October afternoon Henry called me into his office to confront me about the sticker. This was the moment that set my life on its course. Sitting among his papers, he told me, “Daniel, I need you to remove the abortion sticker from your door.”

I’d been on my way to teach, and as I stood in his doorway with my textbook and lesson plans tucked under my arm, I asked, “And why would I consent to do that?”

He leaned forward, his bulk jostling the clutter on his desk and bumping the nameplate that read
Henry McSween-Chair-Department of Mathematics
. “There have been complaints.”

“From whom? I have a right to face my accusers.”

I fixed him with a cold stare. “Every kneejerk liberal on this campus has their door plastered with political jargonizing. Every five feet there’s a Clinton/Gore sign. This is a clear infringement of my civil liberties.”

“Daniel,” he said “that sticker of yours is incendiary. You know it is, and that’s why you put it on your door in the first place. You wanted a reaction, and now you have it. So please, as a favor to me, let it end here.”

I’d been adjuncting at the college for a little under three years, and Henry had always treated me fairly. Out of consideration to him—and perhaps out of some vague fear of losing my position—I left and walked back down the hall to my office.

On the door, beneath my name and office hours, was a bumper sticker that read:
Abortion Is Murder.

I pulled off the sticker. As it unpeeled, it curled up like a scroll.

I stared at it.

Then, without thinking, I walked back down the hall. I didn’t know what I was going to do until I got there. All I felt was a rising sense of resolution.

I tapped on the door. Henry looked up from his papers.

He rubbed his face. “Daniel, please. You’re not going to leave over this? Mid-semester?”

But I was. Not that I’d planned it, mind you. I hadn’t. But as soon as I said it, I knew it was the right thing.

With the sticker rolled up in my hand, I looked him in the eye as I told him, “I have to do what He’s telling me to do.”

He sighed and said, “Daniel...You’ve got nothing to prove. You’re going to leave your job over a
bumper sticker
?”

“Look,” he said, standing up and coming around his desk. “Maybe it’s not for me to say, but you have a sick wife at home. I know this adjunct position doesn’t pay much, but don’t you have your insurance to think about?”

“Yes. Well, in my experience the lord’s grace is less dependable than our HMO. And that’s not saying much.”

He sighed and shook with me. “Fine, you dumb bastard, quit. But remember I told you that you’re making a terrible mistake.”

Walking out to my car, I felt good—better than I had in a long while. The feeling didn’t last long, however. Before I even got my door unlocked, a fear started tugging at me. I had bills to pay. I had many bills to pay. My wife, Jennifer, had been hurt years before in a car accident. She was now mostly confined to her bed and required a tremendous amount of care. I knew I should head home and see her, but I couldn’t quite bring myself to face her yet. I couldn’t bring myself to tell her what I’d done. Since her accident, she wasn’t always as supportive as she should have been. I would have to figure out the money issue myself.

I could no longer ask anyone at the Baptist church for help. That much I knew. I’d long since fallen out with those Sunday morning Christians over how best to fight the abortion plague. They might have trumpeted their commitment to Christ, but it was impossible to actually get them to do anything about the death clinics. You can’t even get most Baptists to a march. One day during a service, in the thrall of what could have only been the Holy Ghost, I had stormed out on them, swearing never to return. And I never did.

Soon after that I joined up with some rural Pentecostals, but we also eventually parted ways over the abortion issue. Some of them would actually show up for marches, but in the end, I suppose we had different priorities. My first night in church, the congregation all put their hands on me and started praying in tongues. I took that as a good sign, because they were more authentic than the Baptists. But the problem with the Pentecostals is that they’re all about one thing: the Holy Ghost experience. It’s always the Holy Ghost this and the Holy Ghost that. If they’re not babbling in tongues, they’re not happy. They’re worse than drug addicts.

So the Baptists and the Pentecostals were all talk. The Baptists talked Jesus and the  Pentecostals talked the Holy Ghost, but none of them wanted to actually do anything for God. And it’s the
doing
that shows your commitment. I simply don’t know what religion means to people for whom religion doesn’t mean
everything
.

So Henry McSween was right. I had a sick wife and many, many medical bills. But as I drove away that afternoon I reminded myself that I had stepped out on faith. I knew the Lord was leading me where he wanted me to go.

He led me to the local death clinic. Some believers are scared to go near them. I never was. It settled my mind, somehow. In the midst of confusion or stress, it helped me to be near something that gave me an absolute sense of clarity. It felt good to be near people I could hate without reservation.

We had three clinics in town, and one wasn’t too far from where I lived. A tiny building hidden behind the medical towers, it had powder blue vinyl siding—an almost sarcastic color for a house of horrors. While a small sign out front stated that the building was a “woman’s clinic,” the entrance was located in the back with a full-duty security guard inside.

I walked around to the back and sat down on the concrete base of a light pole in the middle of the little parking lot.

There were five cars in the parking lot. One was an emerald-colored BMW. I knew who that belonged to.

In a couple of minutes the door opened and a short-haired woman wearing a thick coat and green scrubs walked out. Holding a cigarette and a lighter in one hand, her other hand still on the doorknob, she stopped when she saw me. She froze so quickly, it looked as if she were playing freeze tag. Quite comical, actually. Slowly, she went back inside, and in a moment the security officer came out.

He wore no hat or coat—the better to display his military crewcut and muscular arms. He strode over to me and asked, “What’s up, buddy?”

His eyes stayed locked on to mine. “You waiting for somebody?”

“Then what are you doing?”

“Awful chilly out here to be sitting around doing nothing. Kinda weird thing to do.”

A mean smile twisted onto his face, and his blue eyes flashed like little pieces of polished steel. “How about you leave before something bad happens, pal.”

I looked down at his shiny, black shoes. “The last I checked, this is still a free country. Or did I wake up in Russia this morning?”

The door opened and the abortionist came out. Thin, dressed in a shirt and tie, he had curly blond hair and glasses. I’d seen him before, but I don’t believe he’d ever seen me. He stopped by his BMW and put his hands on his hips just like the security officer.

When I met eyes with the abortionist, I called to him, “What will you say to your creator?”

“Okay, shithead,” the security officer said. He thrust closer to obscure my view of the abortionist, so close to my face I could smell the coffee on his breath. “Up. Now.”

I shrank back against the pole.

“Fine,” I said. I stood up and walked off from him, but I stopped in the dry, brown grass at the edge of the parking lot and looked back. The security officer hadn’t moved, but the abortionist was standing beside him, looking at me. For just a moment longer I was eye to eye with a killer of children.

It chilled my blood.