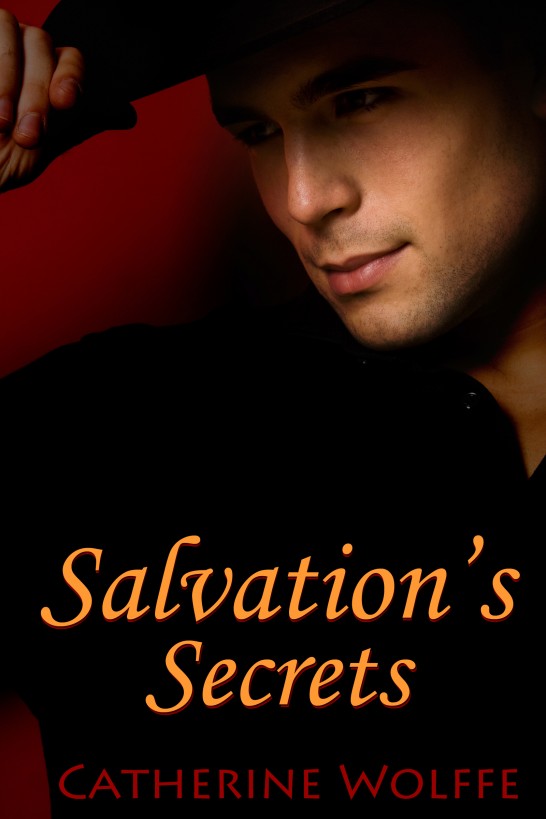 Discover other titles by Catherine Wolffe at
www.catherinewolffe.com
.

In order to protect minors from viewing
inappropriate material, please know that this book may contain
language, situations or images inappropriate for children under 18
years of age.

Salvation’s Secrets is the prequel to the
series entitled The Loflin Legacy. It is not essential to have read
Book 1 and 2 of the series before reading this prequel.
If you’d like to find out more, go to my website
at
www.catherinewolffe.com
and
click “My Books.”

The Lady in the Mist (A Werewolf’s Tale)

The Lady in the Mist (The Western Werewolf
Legend #1)

The air filled with the scents of sandalwood
and lilac as afternoon approached evening. Female laughter floated
on the breeze. Drawn to the curious sounds and smells, Seth Loflin
maneuvered his bay into the trees lining Shooter Creek. His heart
skipped a beat with the sight before him.

The woman was the most mesmerizing creature
he’d ever seen. Her jet-black hair hung to her waist and her skin,
reminded him of a creamy praline, the kind they sold on New Orleans
street corners. Would she taste as sweet on his tongue? Water
swirled against her thighs as she exited the creek with the help of
several attendants. Unaware of his presence, she trailed a long,
slim finger through the water, giving the lazy current a deliberate
ripple. Her graceful back curved slowly into a trim waist, which
flared into agilely rounded hips above lithe thighs. She looked
relaxed, as if she’d enjoyed her bath. Tall and regal, her stance
reminded him of royalty.

As the other women helped her up the bank,
disappointment set in immediately, when they cloaked her body with
a blanket. Okay, so he’d have to get a better view. “Let’s go,
boy.” Urging his horse, Sarge, forward proved tricky. The darn low
lying limbs of the Mesquite trees, lining the banks of Shooter
Creek, wanted to reach out and snag everything. Wouldn’t do to
disturb the leaves littering the ground either.

The women’s dark heads jerked up as they
went on alert, searching the trees for an intruder. One called out
in Comanche, “Who’s there?”

“Way to go, Sarge.” Caught yet still
determined, Seth slid nimbly from Sarge’s back and stepped into the
clearing mere yards from the bathers.

While alarm ran through the voices of the
others, the magnificent creature with the coal black hair didn’t
shy away. Half covered in the blanket, she only stared at him. The
nudity another woman might hurry to conceal proved of no concern to
this marvelous dream-come-to-life. The perplexed, yet curious glaze
she pinned him with stole his breath. Her eyes were as green as the
bonnie banks of Ireland and almond shaped in her lovely face. A
sultry mouth of warm rouge formed an ‘
oh
’ as her gaze
traveled over him. The heat from her gaze did something to his
libido. Glancing down at his erection twitching in his pants, Seth
blinked. Where had she come from? So many questions flooded his
consciousness he lost his voice.

Before he gathered his wits, the women
hurried the maiden up the bank and out of sight. In their wake came
the sound of native voices.

He had to know her name. Seth gathered
Sarge’s reins, leaping into the saddle. His intention to follow
proved short-lived when three tall, muscled warriors blocked his
path. Speaking Comanche, Seth tried communicating with the
Indians.

“My name is Seth Loflin. This is Shooter
Creek land, which belongs to my father, Earl Loflin.”

The tallest warrior’s gaze traveled over
Seth slowly before replying. “The People are camped nearby. My
uncle, Chief Lone Eagle seeks the deer, which water here. He comes
in peace.”

Seth nodded. “I’ll tell my father of your
intentions. Your people may hunt free of concern.”

The thick-chested Indian inhaled deeply
before nodding. If he held concern over the reference of land his
people had lived on for centuries being claimed by a white man, he
didn’t let the rub show. “My name is Broken Horse. I am Lone
Eagle’s kin. I believe you call the family connection, nephew. I am
pleased to meet you, Seth, son of Earl Loflin.”

The good natured grin came as natural as
breathing for Seth. “I wonder if I might meet your uncle, the
chief.”

Broken Horse cut eyes back toward a campsite
where smoke now trailed into the darkening skyline. “You are
welcome. Follow me.” Speaking to the other two men in the group, he
pointed toward the camp. The two left at a trot with what could
only be orders to prepare for a guest. “Where did you learn
English, Broken Horse?”

“I learned at Fort Tyler. Your army sought
communications with The People. Lone Eagle saw my education in your
language as a good thing. Long before you arrived, the Indians of
Texas communicated through sign language with the men who came
before you. In many cases it proved ineffective.”

“I’m impressed. You speak as though you were
born to the language.

He cut Seth an agreeable grin. “The People
need to understand many things about your lives and reasons you are
here. I provide a service between the two cultures.”

“A very necessary service, I’d wager. Will
my presence in camp concern your uncle?”

Broken Horse shrugged. “That depends on your
motives for coming, Seth Loflin.” He cut Seth a cool eye. “What
were you doing watching our women bath?”

Busted! No need in trying to lie. Broken
Horse could have made buzzard bait out of him in short order. “I
wanted to meet the regal young woman with the emerald eyes.”
Glancing down, he searched Broken Horse’s face. “Can you introduce
me?”

He grinned. “I can. But why should I, Seth
Loflin?”

Within the blink of an eye, Seth grinned.
“Because, if I don’t get to meet her, I’ll die.”

Huffing out a breath, Broken Horse shook his
head. “Are all white men as stupid as you?”

Seth’s eyebrows winged up. “I’m not stupid.
I’m in love!”

“It’s the same thing. But if you insist,
I’ll introduce you. You have to know, it won’t do any good.”

Seth’s brows drew together. “Why do you say
that?” Sincerely baffled by his new friend’s statement, he tried
again. “Does she have a man?”

“Of sorts.” Broken Horse squinted into the
setting sun. “You’ll stay and eat, Seth Loflin. Soon, I think
you’ll understand what I mean.”

Best not to let on he didn’t understand a
word of what Broken Horse meant. After all, he was still determined
to catch another glimpse of the beauty, while keeping an eye out
for trouble. He wasn’t a fool – he knew the Indians might mean
trouble. The Comanche waged war on outlying settlements and ranches
further west. Indians driven from their lands by whites bode ill
for settlers venturing into unseen danger. So far, there’d been no
trouble in Smith county. He hoped things remained so.

There were ten or twelve teepees set up
around a central fire pit. Children, some, as naked as the day they
were born, ran back and forth among the structures, laughing and
shouting. A couple of dogs raced after the children. Women paused
in preparation of the evening meals to stare at the newcomer.

Familiar words came back to him. Shooter
Creek’s housekeeper, Maggie, always with a sound wit, said
‘you
gather more flies with sugar than you do salt’.
Making sure he
had a smile on his face, he tipped his hat to several women working
nearby. If anyone from the ranch had seen him acting like a
besotted fool, he’d have taken a ribbing for weeks. Broken Horse’s
presence was enough.

“You planning on wooing every woman in
camp?”

Stiffening with the poke, Seth straightened
his spine in the saddle and gathered his composure as the Indian
translator’s laughter echoed in the growing darkness.

No use trying to live down the fact he was
trying to make friends. If a smile worked, so be it! Shifting in
the saddle, Seth squared his shoulders.

A small woman of middle age stepped forward
when they reached a tent positioned squarely in the center of the
camp.

“This is Maylia. She is the maid to Lone
Eagle and his daughter.” With the statement, Broken Horse’s mouth
creased at the corners.

The Indian was omitting something in his
statement. Nodding tightly, Seth glanced around them, noting his
presence drawing much attention. A tall, muscular Comanche brave
stepped forward. He wore a red sash tied at his waist. His arms
folded across his chest spoke of contempt. Understanding the man’s
reluctance to having a white man in camp, Seth threw his leg over
the saddle horn and slide from Sarge’s back, landing near the
brave. “Can you introduce us?” he asked Broken Horse.

“Yes.” Glancing from Seth to the stoic
Indian, he said, “Seth Loflin, this is Red Bear, the next in line
for chief of the tribe.” Broken Horse introduced him in Comanche to
the brave.

Noting the thin set to the man’s mouth, he
figured he’d met an advisory strictly because he was white. Though
he extended his hand, the man made no move to greet him, either in
Comanche or as a white man would. This man hated settlers.

“Come, Seth Loflin, I’ll introduce you to
the chief.” The broad smile appeared again as Broken Horse
approached the large tent and called out. Soon, he threw back the
flap and entered leaving Seth waiting outside. A few uneasy minutes
passed as Red Bear stepped forward, positioning his broad chest
firmly in front of Seth. With his arms crossed, his eyes never left
Seth. Several others gathered behind him in a show of support. The
chief appeared moments later.

His hair hung in long tight braids with
feathers adorning each. A large band fit snugly around his head and
fastened in the back. He wore a tunic and pants of buckskin with
moccasins of soft leather on his feet. His age was hard to
calculate. Comanche aged without revealing their true years.
Admiring his authoritative stance, Seth extended his hand in
greeting, when Red Bear and the others reluctantly parted for the
chief.

“Allow him to accept your presence before
becoming social, Seth Loflin.” Broken Horse’s instruction came in a
quiet voice.

The chief’s expression held curiosity and
something else Red Bear’s face hadn’t – respect. Speaking in
English, Lone Eagle laid his hand on Seth’s shoulder. “Welcome to
my camp.”

Relief in hearing his native language, Seth
grinned and nodded. “Thank you, sir.”

Broken Horse stepped closer. “Refer to him
by his name. This will show respect.”

Glancing from the translator to the chief,
Seth nodded again. “I am honored to be here, Lone Eagle.”

The chief’s eyes crinkled at the corners and
his face creased in a weathered smile. Nodding for Broken Horse to
show Seth into his tent, Lone Eagle turned to Red Bear and the
braves standing nearby and spoke to them in a hushed yet commanding
tone before turning to join them inside.

The interior was dark. A small fire burned
in the center of the tent, giving off a faint glow as shadows
danced on the hide walls. On the left, two women bent to a task of
food preparation. The smell of roasted meat and corn pones filled
the air.