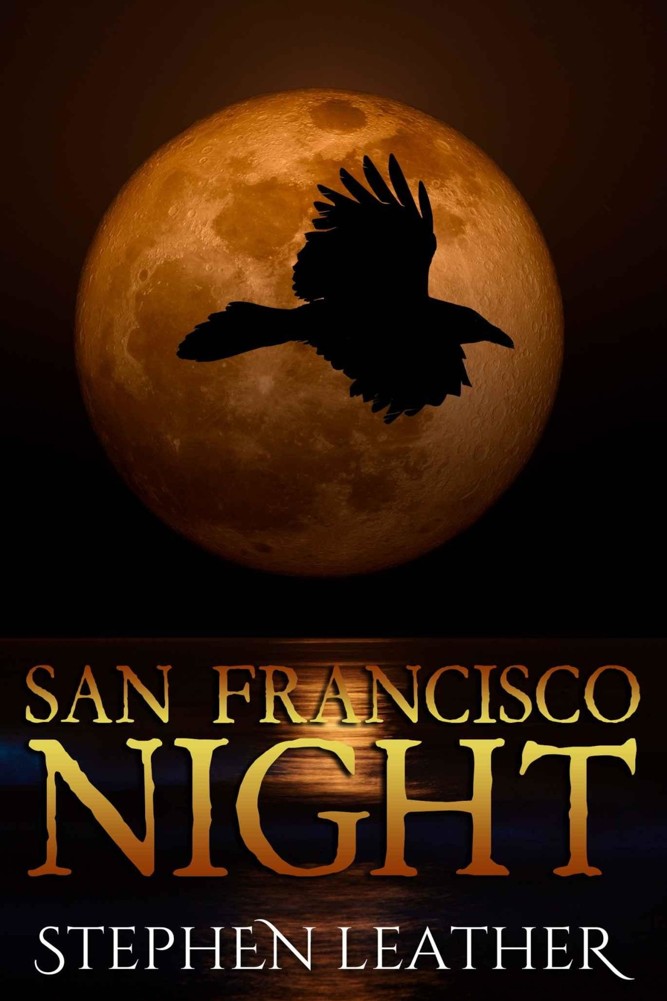 All rights reserved. No part of this publication may be reproduced, distributed, or transmitted in any form or by any means, or stored in a database or retrieval system, without prior written permission of the copyright holder, Stephen Leather

Jack Nightingale fights his battles in the shadows – in the grey areas where the real world meets the supernatural. But when he arrives in San Francisco to take on a group of Satanists bent on opening a doorway to Hell, the danger is out in the open and all too real.

The Apostles – a Satanic coven using murder and torture to pave the way for a demon to enter the real world – realise that Nightingale is on their tail. And unleash their own brand of monsters to take him down. With Nightingale’s life – and his very soul – on the line, he has only days to stop The Apostles from bringing death and destruction to the entire world.

Jack Nightingale appears in the full-length novels Nightfall,
Midnight
, Nightmare, Nightshade and Lastnight. He has his own website at
www.jacknightingale.com
He also appears in several short stories including  Cursed, Still Bleeding, Tracks and My Name Is Lydia.

Sister Rosa had five minutes of her life left when she opened her eyes. She had no way of knowing that, but she did know that her God had deserted her utterly when she needed Him the most. Her arms were stretched out on either side of her and she could feel ropes cutting viciously into her wrists. Her ankles were also securely tied. She tried to scream, but the gag in her mouth muffled all sound. She was naked.

She could hear chanting, but in a language she had never heard before. A flickering light cast shadows on the walls and the air was filled with the tang of burning herbs.

There were figures standing around her, dressed in long black robes, their features hidden by tall pointed black masks.

The chanting stopped, and a deep, muffled voice spoke, though there was no way to tell which masked figure was talking. “Peter. It is time.’

One of the figures moved nearer to where Sister Rosa lay spread-eagled on the giant cross. It stopped, facing her, then bent down to show her what it held in its hands. A hammer and four large steel nails. Sister Rosa tried to scream, but the gag muffled all sound. The hammer and nails were passed in front of her face again, and the figure walked to her left. Sister Rosa began to recite the Lord’s Prayer as she felt the point of the nail pressed into her palm, then her body arched in agony as the first hammer blow was struck. The first blow pieced her palm, but three more were needed to drive the nail all the way into the wood. Tears were running down her cheeks, but the gag efficiently stifled her sobs. The pain of her last minutes on Earth was far beyond anything she had experienced in her previous fifty years. She tried to focus on the words of the Lord’s Prayer but the pain drove the words from her head.

The robed figure had now moved to her right hand, the nail was in place on her palm, and again the hammer came crashing down. Once more her body arched as it desperately tried to cope with the violence of the assault.

Four more heavy hammer blows for each foot, and then the figure straightened up to survey its handiwork. The masked head gave a slight nod.

Sister Rosa lay trembling, blood seeping from the wounds in her hands and feet.

The figure walked to a small wood altar, where a silver cross stood upside down. It put down the hammer and picked up the cross before walking back towards the blood-spattered body of the helpless woman. The longer end of the cross, nine inches of smooth polished silver, was placed between her legs and held there. Peter moved it gently backwards and forwards for a few moments, then with brutal force rammed it hard inside the woman. The gag muffled most of her screams.

Blood sprayed over Sister Rosa’s legs and her body gave one last enormous heave, before it could bear no more and she lost consciousness.

Four more figures strode towards the cross, attached a heavy chain to a hook at the base, then hauled it off the floor with a pulley placed in the high ceiling. The end of the chain was fastened to another hook in the wall. The cross now hung three feet off the ground, with the nun’s head hanging downwards, blood flowing from her wounds and pooling on the floor.

The chanting began again, this time with a feverish intensity to a gathering crescendo. One of the figures held both arms aloft, and there was instant silence. Again the command rang out.

The figure of the tormentor walked back to the altar, picked up a short curved knife in its right hand, and a large plain bronze bowl in its left. The figure walked back to the center of the room and placed the bowl on the floor beneath the bound woman’s head. Peter held the knife aloft with both hands and shouted a Latin phrase. The robed figures chanted back in Latin.

The knife flashed down across Sister Rosa’s throat, laying it wide open and ending her agony. Peter picked up the bowl in both hands and let it fill with the spurting blood. The chanting began again, as Peter placed the bowl back on the altar and moved back towards the others.

Another word of command was given, and again the chanting stopped. The same muffled voice spoke, more softly this time.

“Peter, you are now fully initiated amongst us. Disrobe, and present yourself to us, that we may welcome you to our number with the kiss of our master, and you may offer us the blood of the sacrifice to drink. As a full initiate, you are also required to provide Service to the
Temple
.”

The reply came loud and immediate.

Peter stood in the middle of the group, removed the mask, shook off the robe and let it fall to the ground. Naked and confident, cheeks bright, eyes alive with excitement, a telltale flush at her throat, the tall, beautiful, young woman shook her red hair loose and presented herself to her fellow disciples.

The young man known as Simon was the first to leave the temple, since he was not permitted to witness the Service to the
Temple
, or attend the drink and drug-fueled coupling that always followed a sacrifice. His real name was Lee Mitchell, but so far as he knew only Abaddon knew that. He changed back into his street clothes in the Robing Room. By the time he’d finished pulling on his Chinos and crew-neck pullover, a robed and masked figure had arrived and placed a black hood over his head. The figure took Mitchell by the hand and led him out of the door, across a graveled drive and into the back seat of a white Lincoln Town Car with blackened windows. Only full initiates were allowed to know the location of the group’s ceremonies. Mitchell heard a driver get behind the wheel, start the engine and drive away from the house.

Twenty minutes later, the driver stopped the car in a side street on the outskirts of
San Francisco
. “You can take the hood off now, Simon,” said the driver. “After the next meeting we won’t need to do this any more. You’ll be fully one of us. Do not look back as you leave the car. Just walk away.”

Mitchell removed the hood. There was a black tinted window separating the passenger seats from the driver. He said nothing, just got out and walked twenty yards to where he’d parked his own car, a black Porsche 911.

Thirty minutes later, he was outside his house. He parked and climbed out to stare at the
Golden Gate
Bridge
half a mile away, its lights flickering through a drizzly mist. He opened the front door, walked straight to the downstairs bathroom and vomited into the sink until there was nothing left in his stomach.

He washed his face, then rinsed with mouthwash to get rid of the foul taste. He stared at his reflection in the mirror. His eyes were wide and bloodshot, his skin was white and pasty, he looked as if he hadn’t slept for a week, which was close to the truth.

He walked down the corridor to his study, picked up the phone and tapped in a number. It was answered on the second ring, but went straight through to voicemail. Mitchell cursed under his breath. He considered putting the phone down, but knew that he needed help and this was the only way to get it. He took a deep breath to steady himself. “It’s Lee,’ he said. “You have to come and get me. I can’t take this any more. They crucified a nun, a fucking nun. And it’s my turn next, you have to help me. I need to get out now. Call me back as soon as you get this.’

He put down the phone and went over to his drinks cabinet where he poured himself a large whiskey. He was on his second gulp when the phone rang. He hurried over and picked it up.

“I need the names, Lee. I need to know who is in the group. And where they hold the meetings.”

“They won’t let me see the house until I’m one of them.”

“Then you need to wait.”

“I can’t! I’ve told you what they want me to do. They killed a nun today.”

“Are you mad? If they catch me with anything like that, anything at all, they’ll kill me for sure.”

“What about Abaddon? Have you learned anything else about her?”

“Have you seen anyone else? Anyone you recognize?”

“Two so far. Look, you have to get me out of
San Francisco
. You said you could get me a new identity.”

“No, not until I’m safe, it’s all I have to bargain with. Get me out of here and I’ll tell you everything I know.”

“Okay, the airport in two hours time. Take a cab to the station and change cabs there. You’ll be met at the Delta desk in Departures. A woman called Valerie.”

“How will I recognize her?”

Mitchell put down the phone and raised his glass to his lips. He flinched at the sound of a car in his driveway.  Doors opened and slammed shut and he heard footsteps on the gravel. His heart began to race and he put down his glass with a shaking hand. He hurried to the living room window and peered through the blinds. There was a black SUV parked behind his Porsche. He turned and ran for the french doors and sprinted across the garden. His neighbor’s Rottweiler barked as Mitchell scrambled over the fence. He heard shouts behind him but he didn’t look back as he ran.