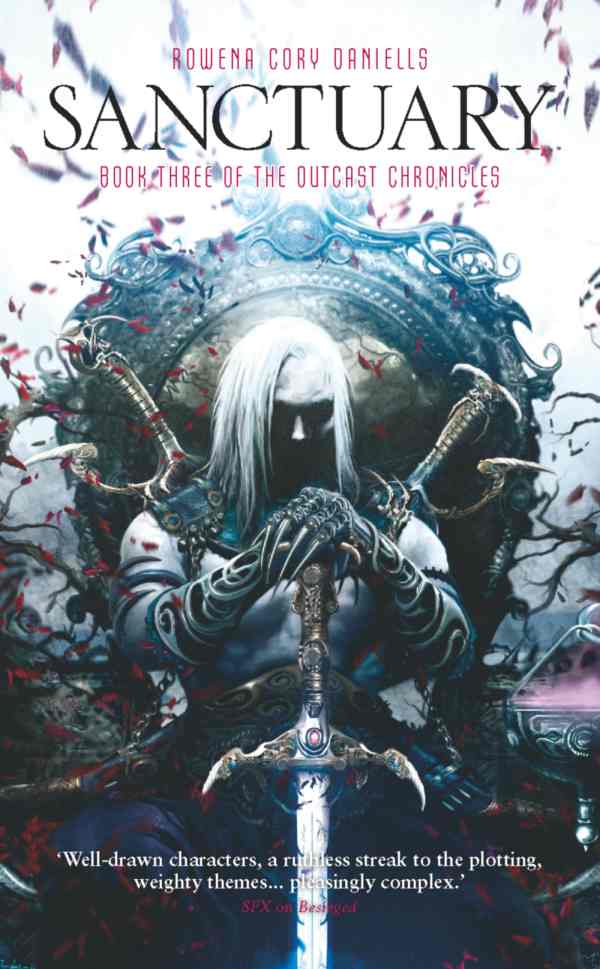 “Rowena Cory Daniells has a splendidly devious way with plotting.”

“It’s a story of kings and queens, beasts and warriors, magic and religion. If you like any of the aformentioned things, then you’ll probably join me in loving this book.”

Den of Geek
on
The Chronicles of King Rolen’s Kin

“
The King’s Bastard
is a cracking read and the pace never lets up.”

“Pacy and full of action and intrigue.”

Trudi Canavan, author of
The Black Magician
trilogy, on
The Chronicles of King Rolen’s Kin

“
The King’s Bastard
is a fabulous, rollicking, High Fantasy adventure that will keep you up at night, desperate to find out what happens next.”

The Chronicles of King Rolen’s Kin

Book Three of the Outcast Chronicles

All rights reserved. No part of this publication may be reproduced, stored in a retrieval system, or transmitted, in any form or by any means, electronic, mechanical, photocopying, recording or otherwise, without the prior permission of he copyright owners.

All my life, I’d been told the Wyrds were ungodly creatures, born without a soul or a conscience. It wasn’t until I collated the information on their gifts that I realised they were just people like us, both good and bad. When I was offered the chance to sail with the Wyrds and write the story of their exile, how could I refuse? 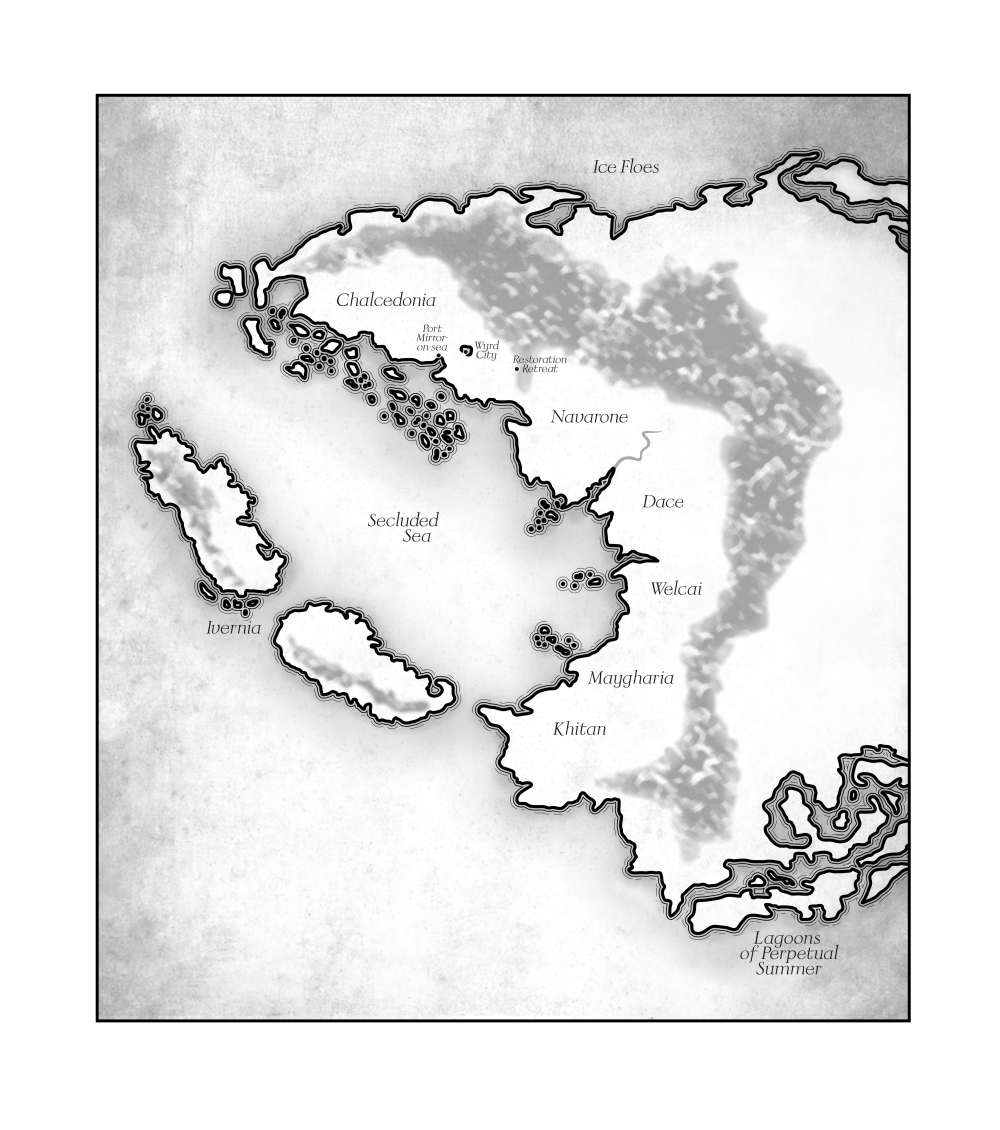 Chalcedonia and the Five Kingdoms

He could ask her the same question; she was no more than fifteen, and also of True-man stock. When he had been taken aboard the Wyrd ship, he hadn’t expected to find one of his own race living amongst their ancestral enemy. The Wyrds had put them in a cabin together and ignored them, which was not surprising considering the chaos last night.

‘I’m making notes to write a history of the Wyrd exile –’ He stopped himself. ‘Sorry, the
T’Enatuath
exile.’

Her eyes widened. ‘You know their language?’

‘Only a few words, so far. For instance, they call us Mieren, so don’t refer to yourself as a True-man. They’ll take insult. We’re –’

‘Mieren, I get it. I’m not stupid. My husband could do no more than write his own name, but he was awful proud of it. When he caught me trying to make my letters, he hit me so hard I had a bruise for a week.’ She held his eyes defiantly. ‘After that I practised in secret.’

‘Good for you.’ Igotzon did not see any point in keeping women ignorant. She seemed determined to learn and he needed an assistant. ‘I could teach you to read and write. What’s your name?’

They’d shared a bed last night, and he hadn’t thought to ask. Not that they’d done anything; he was a scholarly priest and she was the mother of a newborn, which had slept between them.

‘I’m Masne.’ She followed his gaze to the infant, with the distinctive mulberry eyes and six–fingered hands of a half-blood. ‘And that’s Soihana. But I suppose she should have a half-blood name, since she’s one of them.’ Determined blue eyes lifted to him. ‘I never lay with a Wyrd, if that’s what you’re thinking. I swear –’

‘You don’t have to convince me. Even the best minds don’t know why some True-man couples produce half-blood babies.’

‘That’s what I told my husband.’ Tears of anger glistened in her eyes. ‘After my pregnancy went beyond six small moons, he beat me. When that didn’t bring the baby on, he denounced me before the whole village and turned me out.’

‘Typical.’ He regarded her curiously. ‘Why didn’t you hand the baby over to the Wyrds? They take in half-bloods born of True-man parents.’

‘And go where?’ she countered. ‘My village wouldn’t have me back. I’d have to go to port and sell my body to buy bread.’

‘You could have offered to serve the Mother.’ It was the only religious institution that accepted women and, now that he thought about it, it was probably full of women who had nowhere else to go.

‘I didn’t think of that. Besides...’ She raised her chin. ‘I couldn’t bear to part with Soihana. She’s all I have in the world. You understand.’

He didn’t. He’d never understood the incoherent emotions that troubled others. For him, the world was logical. Take the True-man –
Mieren
– parents who kept their half-blood sons or daughters, hiding them from their villages. He saw no point. They were always discovered, and the villagers always went hard on them for harbouring the half-bloods. Perhaps by observing Masne with her infant, he would come to understand.

Igotzon put his ink and pen away.

‘Going to watch the handover of Prince Cedon so that I can record my observations for posterity.’

She looked suitably impressed, then frowned. ‘After everything that’s happened, the Wyrd queen is still going to return the prince?’

‘Yes. Look, if you’re going to live amongst them, you have to learn their language and their ways. She’s not their queen. She’s their
causare
. It’s an elected position, and she holds it only as long as they need someone to unite them behind a cause.’

Masne nodded. ‘But their ways are still strange. The way full-bloods divide into brotherhoods and sisterhoods. And the women run things; I would never have believed it if I hadn’t seen it for myself. Why do their men let them –’

‘They don’t
let
them. Power rests with the powerful. T’En women have more powerful gifts than the men.’

‘I guess so, but with their T’En gifts, the bad ones are more dangerous.’

He blinked in surprise. ‘Good point.’

‘I watch and I learn.’ Masne moved closer to him, lowering her voice. ‘I like it with the sisterhoods. These two are run by the most powerful of the T’En women. Yet...’ She glanced to the cabin door. ‘Yet, even they are afraid of the T’En men. If the women are more powerful than the men, why are they afraid of them?’

‘They’re afraid of T’En men?’ He hadn’t known this. He scented a mystery, and the chance to uncover the truth. His heart raced with excitement. ‘I’ll discover things no True-man has ever known. This is an amazing opportunity!’

She stared at him, then laughed. ‘I’ve never met anyone like you.’

‘Of course not. I am a true scholar.’

J
ARAILE WOKE TO
a thumping headache and nausea, made worse by the motion of the horse. Above her she could see a canopy of leaves. It was dawn and her breath misted in the cold air, but she was warm in Baron Eskarnor’s arms. A surge of panic filled her. ‘Put me down.’

Eskarnor laughed. ‘Oh, no, my queen, you’d just try to run away.’

He stopped the horse and slid off the saddle. She made it three steps before she leaned against a tree trunk and emptied her stomach.

When she lifted her head, he offered her watered wine. She swilled some in her mouth and spat it out, then took a mouthful. Meanwhile, Eskarnor joked with his honour guard. She gathered they’d slipped out of port and ridden all night.

Did the baron suspect she was pregnant? Back in the palace he’d raped her, boasting he planned to sit on King Charald’s throne by spring.

No, she should have cut his throat. When he’d thrown her over his shoulder, she’d panicked and pulled the paring knife. Unfortunately the two blows she’d gotten in had done little more than annoy him.

She should have been cool-headed, but she’d been waiting all day for news of her son. In exchange for safe passage to their ships, the Wyrds had promised to return Prince Cedon with his club foot healed. But when the Wyrds had arrived in port, they’d been attacked on the wharf. She’d sent Nitzane with every available man to help them, which left her vulnerable to Eskarnor, who had snatched her from the palace.