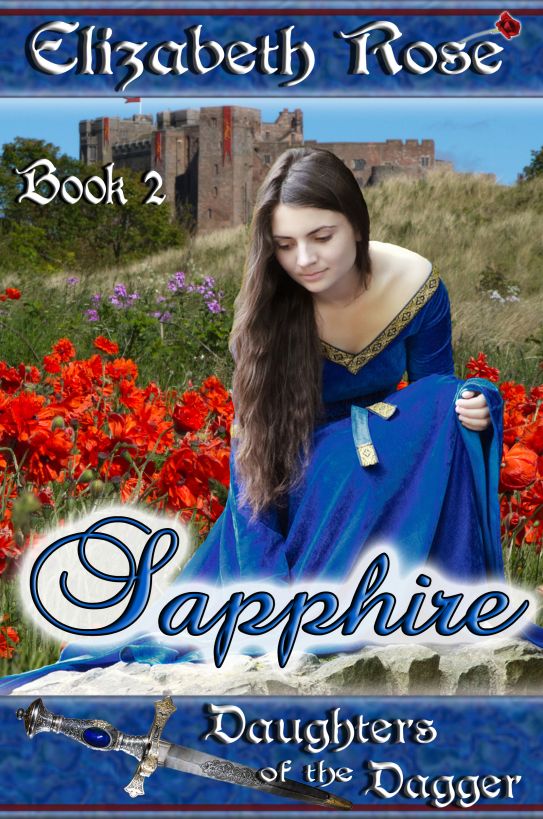 Book 2
Daughters of the Dagger

This ebook is licensed for your personal
enjoyment only. This ebook may not be re-sold

or given away to other people. If you would
like to share this book with another person, please purchase an
additional copy for each recipient. If you’re reading this book and
did not purchase it, or it was not purchased for your use only,
then please return to Smashwords.com and purchase your own copy.
Thank you for respecting the hard work of this author.

This is a work of fiction. All characters,
names, places and incidents are either a product of the author’s
imagination or used fictitiously. Any similarities to actual
organizations or persons living or deceased is entirely
coincidental. All rights reserved. No part of this book may be used
or reproduced or transmitted in any form whatsoever without the
author’s written permission.

(Legacy of the Blade Series)

Lord of the
Blade

Lady of the
Mist

(Daughters of the Dagger Series)

Daughters of
the Dagger – Prequel
(Free)

The Dragon and
the Dreamwalker

The Duke and
the Dryad

The Sword and
the Sylph

The Sheik and
the Siren

The Oracle of Delphi

The Caretaker of
Showman’s Hill
(vampire)

Curse of the
Condor
(jungle)

Lady Sapphire de Burgh from Blackpool lay
beneath her husband, the baron of Lydd as he parted her legs and
plowed into her as if he were doing naught more than planting a
field.

She closed her eyes and tried to drift to
her secret place she’d always disappear to when the man came to
claim his husbandly rights. She’d only been married to the baron
for two moons now. Two moons too long in her opinion. And while she
had originally been betrothed by her father to Lord Roe Sexton, a
man she’d never met, that is not whom she’d ended up with as her
husband.

To her dismay, when she’d arrived in Rye
eagerly anticipating her marriage, she’d been informed by Roe
Sexton’s uncle that her betrothed had died while campaigning in
France for King Edward III, and she’d be marrying the visiting
Baron Walter Poussin from Lydd instead.

She should have known from the moment she’d
seen the beady-eyed cur that her marriage would be one of hell, and
not a marriage of love. She’d been hoping for a marriage of love
after seeing how happy her sister, Ruby was with her new husband.
And Ruby was due to have a child by the end of the year, which made
Sapphire filled with even more longing and anticipation. She loved
children and wanted many of her own, with a loving man to have
sired them. That dream had been dashed the day she’d married the
baron.

While Sapphire was only nine and ten years
of age, her new husband was over forty. He was overweight, balding,
and had a nose on him that was twice the size of what lay beneath
his belt. He was crude, punishing, and hadn’t an ounce of manners
in his entire body. The saddest excuse for a lover she’d ever seen.
Or that she’d ever imagined, as she’d not had a lover before
this.

“Open wider,” he snarled and belched in her
face.

Sapphire knew she had to obey for fear he’d
beat her the way he did the first time she’d objected to coupling
with him. She squeezed her eyes shut and counted the thrusts.
Sixteen, seventeen, eighteen - the man was so predictable. She
tried to picture that secret garden in her mind but couldn’t. Then
she tried to pretend he was someone else, but that just didn’t work
either.

He huffed and puffed above her and on the
twentieth thrust she thanked God that it was over. She lay still
upon the bed and watched him collapse into a drunken stupor next to
her. Only when he started snoring did she let out a breath of
relief.

She ran to the washstand and cleansed her
body of this filthy man. She scrubbed with a cloth between her legs
and took a deep breath as the friction brought her to life. Oh how
she wanted to feel the ecstasy and excitement her sister Ruby had
told her one felt in the throes of passion and in the midst of
coupling. She’d even heard the idle chatter of the kitchen servants
speaking of their heightened pleasures and satisfaction as
well.

They all enjoyed coupling with their mates.
They looked forward to it every night. She prayed each night she’d
die in her sleep rather than have to suffice to her husband
again.

She sank to her knees in front of the
hearth, the firelight dancing in patterns on her full bare breasts.
She looked at her body in the prime of her youth, and knew it would
please any man as well as bear many children. However, neither had
happened with the baron, and he’d told her if she didn’t conceive
soon she’d be of no use to him at all.

Sapphire wasn’t in love with the man, but
she was in love with the idea of birthing children – many children
and someday being a mother. Sadly, she was starting to realize this
marriage would not bring any of her dreams to fruition.

She felt sad and lonely. She was physically,
mentally, and emotionally unsated. She was married now, but being a
woman, she also had her needs for release. It mattered not. In
order to achieve that, she had to touch herself to bring about the
desired outcome. But it just wasn’t satisfying enough. She needed a
man. She needed a husband who would be gentle with her and not
raise a hand to hurt her. Someone with manners who cared for her
and with whom she could feel safe in his protective arms. She
wanted a lover who could please her, as well as a man with whom she
could raise a family. She needed to feel alive and be respected,
not worthless and be treated worse than the castle’s stray
hounds.

She hugged her legs as she glanced back to
the bed where the monster roared in his sleep. Then she focused her
gaze on the dying embers of the fire. She picked up her nightdress
from the floor where her husband had thrown it when he ripped it
from her body. She tossed it into the fire and watched the flames
ignite.

That would be her soon. Her flame would
ignite also. Things would change and she’d find the happiness in
her life she’d dreamed about since the day she saw her mother’s
undying love for her father give her one last reason to smile
before her life drained from her body trying to give the man the
son he’d always wanted.

Her parents had been in love, and though she
was only four years of age when she’d lost her mother and baby
brother as well, she’d never forget the bond her mother and father
had shared.

She’d find that bond and happiness with a
man someday, but it wouldn’t be with the man she’d been forced to
marry. And if it were the last thing she ever did, she’d also find
that pleasure she’d heard whispered about on the tongues of sated
lovers. She would go out and find a man who would love her, caress
her, care for her, and sate her desires, even if her soul would
burn in hell from being unfaithful in her loveless marriage.

The man she’d dreamed of was nothing like
her husband. Mayhap, she decided, ’twas because he was a noble that
cared only for titles and riches and naught of love between a man
and a woman. The same was true of most nobles. Perhaps her parents
and sister were the only exceptions.

Her mother had believed in true love, and
that’s why she’d named her children after jeweled daggers bought
from a blind hag. ’Twas a superstition that they’d find true love
brought on by their mother’s actions. Unfortunately, her father
discarded of the daggers when he lost her, saying they were cursed
and to blame for her death. Now, without the daggers, she wasn’t
ensured true love in this lifetime at all. But she wanted it so
badly, that she would now do whatever it took to fulfill her dream
– and her mother’s dying wish - be it immoral or deceitful, she no
longer cared. She wanted love and she wanted to feel sexually sated
too. And if that made her an evil person – then so be it.

Mayhap she needed to look toward the
commoners for her answer, as the nobles didn’t seem to be able to
give her what she needed. Aye, she decided, she’d start her search
in a common place amongst simple people. Mayhap that is where she’d
find the answers for this thing called love.

Lady Sapphire pulled the hood of her mantle
lower to hide her face as she entered the
Bucket of Blood
behind her stable boy, Dugald. She knew she shouldn’t be in town
this late at night and amongst commoners, but she was trying to
escape her husband, Lord Wretched. That is, the baron. People had
no idea what a horrible man he really was. And if he found out
she’d ever been here, he’d take his fist to her, she was sure.

She only wished the marriage had not been so
rushed, and that her father and sisters would have been present.
Perhaps her father would have stopped the marriage, since the baron
was not an original part of the negotiations he’d made with Roe
Sexton’s late father, Robert, who died just before her arrival. But
she’d been convinced by her dead betrothed’s uncle who was also
Robert’s brother, Lord Henry Sexton, that this was the proper thing
to do and not to jeopardize the alliance between Blackpool and Rye.
So she’d done the deed, to ensure safety to her father’s lands, and
especially her younger twin sisters, Amber and Amethyst back
home.

Sapphire didn’t regret for a moment coming
to the Bucket of Blood pub, searching for answers. After all, there
was nowhere else to go since her own bed was occupied with one of
her husband’s latest women. Since he found her body not planted
with his seed, his impatience won out and he went on to sample any
woman in the castle he could get his hands on. Still, none of them
had been impregnated by him.

She was grateful he hadn’t touched her now
in over two months, as she wanted nothing to do with the vile man
ever again. No woman would ever bear him an heir no matter how many
he sampled. God was obviously punishing him for not only bedding
every woman in the castle - be she a noble or merely a servant -
but also for beating the women when they did not conceive. She’d
had her share of bruises from his punishing hand, and knew this is
not what she should encounter in a marriage or coupling.

A Long Day in November by Ernest J. Gaines
Mathematics and the Real World by Zvi Artstein
What's That Pig Outdoors? by Henry Kisor
Thoughtless Sacrifice by Kam Carr
End of the World (Champion of the Sidhe urban fantasy series) by Archer, S. A., Ravynheart, S.
The Millionaire's Redemption by Margaret Tanner
Picture Cook by Katie Shelly
The CEO Daddy Next Door by Karen Booth
The Summer of Sir Lancelot by Gordon, Richard
Hide And Keep by K. Sterling