SASSY IN STILETTOS ARe version 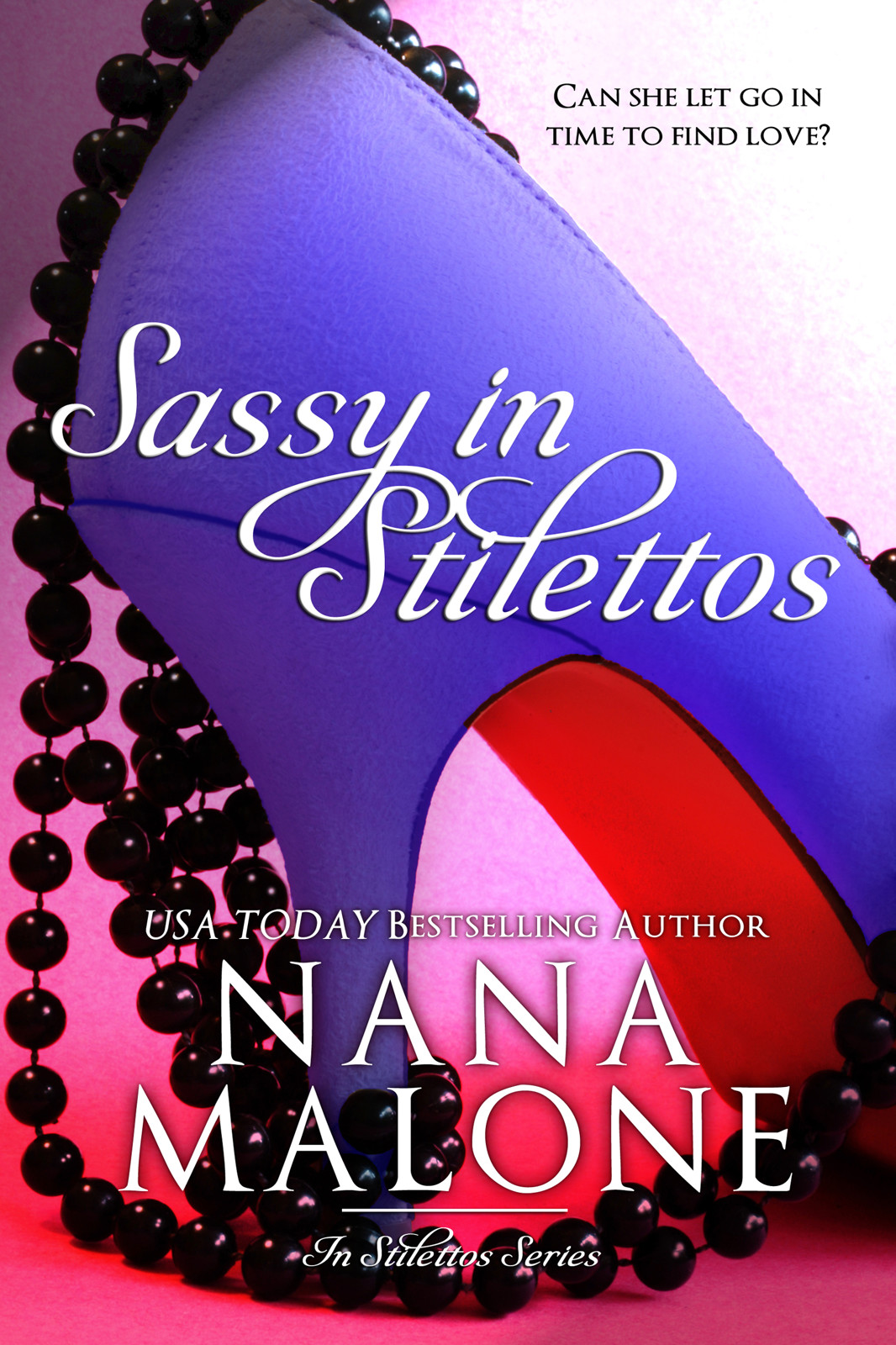 The In Stilettos
Series

This is a work of fiction. Names,
characters, places, and incidents either are the product of the author’s
imagination or are used fictitiously, and any resemblance to actual persons
living or dead, business establishments, events, or locales, is entirely
coincidental.

All rights reserved. No part of this
book may be used or reproduced in any manner whatsoever without written
permission of the author except in the case of brief quotations embodied in
critical articles or reviews.

Published in the United States of
America

For all the fans who have faithfully followed this series. Thank
you for believing in my In Stilettos girls.

Other Books
by Nana Malone

Micha Bennett adjusted her hips to fit perfectly
with her partner’s. His grip on her waist tightened, and her eyelids fluttered
closed as she sank into the blissful sensations of being held. His breath
tickled her cheek, and the vibration from his chest as he growled low, made her
tingle.

In these moments, with their breaths commingling,
his leg sliding between hers, the occasional knocking of their knees, she felt
truly happy.

He shifted his hand to her lower back, fitting her
more perfectly against him. This time it was her turn to give a satisfied moan.
They fit
. And every time she was in his arms, it was
like someone lit her skin from the inside with firecrackers.

A simple light caress or sidelong glance, or God
help her, his lopsided, devilish grin was almost enough to dissolve her into a
mass of quivering need—
almost
. She knew better than
to believe in this moment. This was real life. Not a romantic comedy. She was
not the cute, quirky girl men fell in love with. She was the sassy and
occasionally acerbic best friend who brought the funny. Sitcoms and experience
had taught her love never worked out for the sassy black friend.

As much as she wanted to relish the feel of Caleb
Atkins’ firm thigh separating her legs, or the way his hands caressed her hip
and held her to him. Or even better, the way he whispered her name in her
ear—low and throaty—she knew this was only an illusion. It wouldn’t last. Couldn’t
last.

“Micha, sweetheart.” His voice rolled over her
like whiskey, warm and fluid and making her a little bit buzzed.

She rolled her head to meet his gaze. “Mm-hmm.”
The fire and need speared through her like it always did.

“You’re trying to lead again.” His faint smile was
bemused.

Frowning, Micha narrowed her gaze and tried to
relax. She had no idea why she thought she’d survive dance lessons with Mr.
Walking Sex Appeal. “Well, if you were on beat we wouldn’t have that problem,
now would we?”

He chuckled as he deliberately led her on a strong
turn. “We both know you already think I’m an excellent dancer. You can’t stand
not being in control. Unfortunately, this only works if I’m visibly leading,
and you don’t look pained by it.”

“That’s funny. I thought you were a security
consultant, not a dance instructor.”

“I can be proficient at more than one thing.”

With his six-foot, three-inch frame, Caleb had the
height advantage. Unusual, considering she was five-ten without her heels. It
was easy enough for him to assert control again, but it was her natural
inclination to take charge. It wasn’t like she was doing it on purpose. Except,
maybe she was. She forced her arms to relax to his will.

She’d wanted Caleb from the moment she’d seen him.
She’d been dying to get to know what he was like in bed, but then he’d insisted
on taking her to dinner and ruined everything. Then their two best friends had paired
up and severely decreased the chance that she’d ever rock him in the sack. Everyone
kept rooting for them to get together, but they clearly forgot that she was
relationship kryptonite.

She didn’t
do
relationships.
Ever
. She’d learned long ago that
counting on another person only get her burned. She only trusted Ricca and
Jaya, and even that was hard won. She knew better than to entrust any man with
her heart. So even a sex-only relationship with Caleb would be messier than she
could handle. Sooner or later he would catch a case of feelings, and then she’d
do what she always did—drive him away with a proverbial pitchfork. Eventually
her friends would have to choose sides, and she would not be on the winning end
of that dodge ball game. Jaya and Ricca were the closest thing to family she
had, and she would not rock the boat of the group dynamic. Without them, she
would be completely alone in the world.

Unless I find my mother
.

Micha squashed that errant thought as soon as it
surfaced. Wishing for something that was never going to be was a quick way to
get a broken heart.

Too bad none of her lectures had dampened the chemistry
with Caleb. It was hard enough to try to stay away from the naughty thoughts
about him when she wasn’t pressed against the thick length of his erection for
a solid hour.

She cleared her throat. “Your dancing is fine.”
And by fine she meant she really hoped there was a correlation between a man’s
dance ability and his sex abilities. Judging from the way he moved, she was
missing out on a hell of a ride.

Caleb barked out a full, rich laugh that turned
their friends’ heads toward them quizzically. “Your glowing endorsement fills
me with the warm fuzzies, princess.” He glanced around. “Look, Ricca and
Beckett seem to be dancing without bickering at all, and Tamara and Max are
even pretending to have a good time. You only have to suffer me leading for another
five minutes, and then you can run.”

She ground her teeth to keep a biting retort in
her head. She could play nice for a lesson or two. But that shit was impossible
with her libido in full roar. The whole reason they were even taking lessons
was for Jaya and Alec’s wedding. They wanted to surprise the happy couple with
a rhumba, waltz, and a tango, since Jaya was so obsessed with that celebrity
dancing show. But Micha was starting to think this whole thing was a bad idea.

Caleb traced his fingertips down her back, and she
immediately regretted wearing her dance clothes. The backless, spandex top and
sports bra did nothing to shield her from the onslaught of skin to skin
contact. His deft fingers forced her into compliance as his hips led hers in
the simple rhumba step. It felt good to let him lead. It felt good to do
nothing but follow along and relax for a moment. To allow him to lead her in
the sexual dance.

Caleb’s voice was low, intimate. “See. You like it
when I’m in charge. It feels good, doesn’t it?”

At first, his words didn’t register, only the low
tone and cadence. They sounded like love words someone would say in bed. But
then the meaning filtered into her consciousness, and her back stiffened as he
spun her out for a turn. She abruptly lost her footing and hit the ground with
a thud.

Caleb rushed down to her side. “Shit, Micha, I’m
sorry. I thought you were following along. I don’t know what happened.”

Ricca and Beckett followed suit as did Max and
Tamara, all of them chattering at once. Micha rubbed her bruised tailbone. “I’m
fine, you guys. Goes to show what happens when I let the white boy lead.”

Caleb grinned and offered her a hand. She glanced
at it dubiously, but she wasn’t so snotty she couldn’t accept the help. He
hauled her up, bringing her flush against his body. His gaze flitted to her
lips, and Micha’s body hummed.
Holy shit. He was going to
kiss her.
With everyone looking on, he was going to kiss her. And she
wanted it. Something to cut the never-ending tension between them. Something
to—

Caleb cleared his throat and set her away from
him. “I guess we still have practicing to do.”

Their instructor, Gloria, glided into the middle
of the dance floor and gave them all a megawatt smile. “Fantastic rehearsal,
everyone. Max and Tamara, you’re really coming along, and Ricca and Beckett,
wow, you look like you’ve been doing this your whole lives.”

Micha scowled. Of course they did. If Ricca was to
be believed, she and Beckett spent nearly all their together time doing the deed
in all manner of positions. They had plenty of practice moving together.

“Caleb, you and Micha, the chemistry is off the
charts, but I need you two to work together on having it not look like a battle.
Can you two practice that before next week’s class?”

Micha rolled her lips inward and folded her arms
over her chest. Yeah, they could practice, with him naked and beneath her—she
cleared her throat. If she couldn’t say anything nice, probably better to shut
the hell up.

Caleb, on the other hand, grinned. “Sure thing, we’ll
work on it.”

As soon as Gloria dismissed them, Micha made a
beeline for her purse and jacket. She had a staff meeting at the magazine to
prep for, and she didn’t want to be late. Mumbling a goodbye to Caleb, she tried
to skip out the door without her best friend, Ricca Munroe, seeing her, but
Ricca was no fool. She was waiting for her at the exit.

“Where you running to?” Ricca leaned against the
door.

Micha tried to skirt around her. “Ricca, can we do
this later, honey? I have a meeting.”

Even though Ricca was tiny, at five feet she was
still formidable, especially when she had something in her sights. “Micha, what
was that in there? You and Caleb need to figure this shit out. We don’t want to
ruin Jaya’s day.”

And there it was—the guilt. Had it been anyone
other than Ricca or Jaya, guilt wasn’t an emotion Micha even bothered to
entertain. It was a useless emotion. But since those two were the only people
she actually loved, they knew how to work that angle.

She sighed. “Yeah, I know. We’ll get it together. I
promise. I’ll call you when I get home.”

Ricca scrutinized her. “What’s happening with you?
You’ve been off for weeks. You’ve been short with everyone. And distracted. And
you’re fighting with Caleb more than usual. Is something going on I should know?”

“Nothing. I swear.” She swallowed around the bitter
lie. She wasn’t ready to talk about what was bugging her, and she didn’t need
Ricca’s and Jaya’s pitying looks.

Ricca sighed. “I don’t believe you. But I know you
won’t talk till you’re ready, so I’ll let it go for now. But whatever it is, I’m
here.”

Shit
. If she stood here
any longer, she was likely to go all girly and start with the water works. “Yeah,
thanks.”

With a quick hug, Micha made her escape and
briskly walked the five blocks down Fifth Avenue, back to her office in the
Gaslamp. She and Caleb needed to figure things out, and quickly, because she
sure as shit couldn’t take another class like today’s. She’d almost broken down
and begged him to screw her already. Maybe it was time to call one of her fuck
buddies to try to exorcise him from her thoughts.