Read Saved by the Rancher Online

Saved by the Rancher 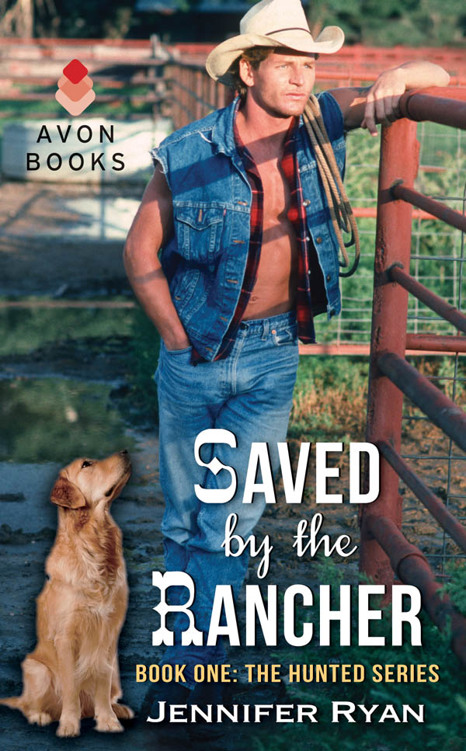 Saved by the Rancher

Dedicated to my three children, who never really mind when Mom’s a bookworm.

To my husband, Steve, who after twenty years of marriage still makes me laugh and believe in love and happy ever after. I’m keeping you.

A special thank you to Mom and your red pen. Your steadfast belief in me that “I can do it” has always given me the strength and confidence to try anything.

For George. You’re the dad I never had and always wanted. The grandfather my kids deserve and I always hoped they’d have.

I’m so lucky to have all of you in my life.

An Excerpt from
Seduced by the Gladiator
by Lauren Hawkeye

D
AVID SAT BEHIND
his massive desk, his hand wrapped around a tumbler of whiskey instead of his high-priced, highly educated, but still incompetent lawyer’s neck.

“She outmaneuvered us, Mr. Merrick. If we’d known about—”

“You should have known!” he bellowed, barely able to contain his temper. “I lost half of everything to that bitch!”

“At least it didn’t go public.”

“Get out.” Voice low, it resonated with his inner rage.

Alone, David stared out the windows of his thirty-sixth-floor office at Merrick International. His company, and now she’d taken part of it. The fire of fury from that single thought shot through his veins, enraging him more. He tipped the drink to his mouth and swallowed a deep gulp, welcoming the familiar sting down his throat. Three men entered. He tracked their progress toward his desk with their reflection in the window. He’d used his elite security team to investigate many corporate deals, but now he needed them for something much more personal.

His back to them, he ordered, “Whatever it takes. Find her.”

They marched out eager to do his bidding.

David turned his focus from the city lights inside to the anger eating away at him. How could she do this? He’d make her regret winning today in court. She’d pay for besting him. No one got away with taking anything from him. No woman left him, especially not his wife.

He held his drink aloft and toasted the San Francisco skyline. “The game is on.”

Jenna opened her heavy eyelids a mere slit. She lay sprawled on the cold wood floor, shivering, snow falling everywhere. Inside? She squeezed her eyes closed and opened them again, trying to focus on the things around her. Her sight adjusted, the double images coalescing into a morbid scene she didn’t want to see. Feathers from the pillows on the bed floated on the air and rained down, creating a white blanket over the devastation in the room.

The ringing in her ears quieted, allowing her to better focus on the bedroom of her rented cottage. Shards of glass from the smashed antique dressing mirror lay scattered around her. Some of the pulled-out dresser drawers landed on the floor, others hung open crookedly. Her clothes, though few, lay slashed and strewn everywhere. The overwhelming sweet scent of jasmine perfume mixed with the metallic scent of her blood made her stomach clench and pitch until bile rose and stung the back of her throat, leaving a sour taste on her tongue.

She took a few shallow breaths to stave off the inevitable, at least until she got to the bathroom.

His worst rage yet. Mind-sharpening memories of the last hour flipped through her brain like a morbid slide show.

Him, grabbing her from behind on the front porch when she returned from running. He clamped his gloved hand over her mouth, grabbed her around the waist, and hauled her through the door. Him, spinning her around and with a backhanded slap sending her reeling backward and crashing into the dining room table. Pain radiated from her hip and down her leg. He grabbed her wrist, pulled her forward, and squeezed her so tight to his chest she couldn’t breathe. Pain along her jaw, she opened her mouth to scream in terror, but he clamped his hand over her mouth, cutting off her air, and the scream rising out of her disappeared in the back of her throat. Him, shoving her away. She hit her head against the wall and stars exploded on the inside of her eyelids. Pain in the back of her head, a large throbbing bump swelled under her skin.

Nothing but him and pain. And, oh God, more to come.

Forcing her into the bedroom, he held her in his tight grip, grinding his hips and hard arousal against her bottom, inciting even more fear.

He liked her scared.

She stood helplessly frozen. Tried to get her mind to work, think, tell her body to flee, but her limbs didn’t heed the wild thoughts in her head.

Him, snatching her belt off the dresser, pushing her onto the bed. She landed on her stomach and his fingers dug into her skin, bruising. She curled up, tried to make herself as small a target as possible. The belt lashed across her back and buttocks, her screams disregarded, her thin tank top and nylon shorts no protection against the bite of the leather whip and metal buckle.

The dressing mirror smashed to the floor with a loud crack. He wielded a shard of broken glass, his lips pulled back in a feral smile, he slashed her thigh, tearing the flesh in a jagged line of searing pain. She screamed in agony. Him, sitting on her bloodied, welted back, pulling her hair and hacking at it. She tried desperately to scratch and claw at his hands over her head. Him, shoving her off the bed and onto the floor with a resounding thud. Him in a mindless rage, demanding over and over again, yelling at the top of his lungs,
“Say you’ll come back. I’ll stop. Say it. Say you’ll come back.”

Him, whispering in her ear, his knee grinding into her spine,
“You’re mine. Wherever you go, I’ll find you. You promised before God you’d be my obedient wife. Till death do us part. Death, Jenna. Say it.”
The last he said with such menace, his voice became calm as a flat sea.

Her whisper, softer than his gasping breath, broke into his raging mind when all her screams went unheard.

Fear gripped her mind and heart like a vice, making it near impossible to speak the word.

“If you’re not with me, you might as well be dead.”

Him, hitting her in the head. Blessed blackness enveloped her.

How long have I been on this floor?

Alone, the silence and stillness in the small cottage reassured her. She couldn’t believe he found her again. God, had she really complained about the flowers left on her doorstep just to let her know he’d found her again, or the threatening notes left in her locked car or house? The late-night phone calls and hang-ups. His showing up at unexpected times and places. Those things were scary. This was . . . madness.

The first time he slapped her, she made the biggest mistake of her life and stayed with him. Because of his pleas and pretty words, she became his prisoner until his ugly words and petty jealousies forced her to flee. Now he had turned the game into a hunt. He would find her and release her, only to hunt her again at his whim.

She didn’t know how he found her, but he did . . . again. This time she remained hidden for over five months, longer than their marriage lasted. All she remembered of the last two years, always on guard, running for her life, never truly alive or safe, and once again it came down to this. He wanted her to know no matter where she went, she belonged to him, and he could find her anywhere.

Sometimes he begged her to come back. Be a family with him. They’d have children. Other times, he yelled and threw things. He blamed her for everything, including his hitting her. This time went beyond verbally abusing her and shoving her around. He raged. She would never be safe. One day he’d make good on his promise and kill her.

He certainly came close this time.

She took a moment to inventory all the aches and pains combining into the pounding throb throughout her body. A gash on her head just above her temple from the candlestick he used to knock her out. Blood dripped over the silver base to the floor where it lay beside her. The welts on her back hurt like hell. How many times did he lash her with the belt? Enough that the blood pooled along her spine. Her severely bruised ribs would heal in a couple weeks. He didn’t kick her that hard, probably because she was already out cold. Not as satisfying to kick her if she didn’t grunt and squeal in pain.

The most serious injury, a long cut on her upper thigh. Probably needed stitches. Not the first time she needed them. Wouldn’t be the last, the gruesome thought came to mind. Once the numbness wore off, she’d feel like a lump of soggy mud.