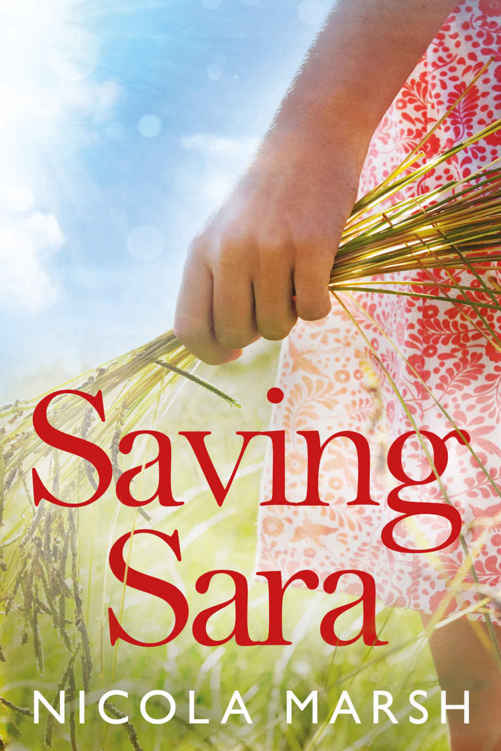 Amazon, the Amazon logo, and Lake Union Publishing are trademarks of
Amazon.com
, Inc., or its affiliates.

For Soraya.
Thanks for believing in me and in this book.
Your friendship means so much.

The size of the coffin struck Sara Hardy most, the day of Lucy’s funeral.

They draped the coffin in an obscene, cascading wave, obliterating the polished wood, a wood she should know from her past but couldn’t remember. Not that it mattered.

None of it mattered. Not anymore.

She wrenched her gaze from the coffin and focused on Greg, her blinding grief mirrored in her husband’s bloodshot eyes.

“People will understand if you can’t.” He gently squeezed her hand and she flinched, hating the contact, hating the wounded expression crinkling his face more.

He cleared his throat. “Maybe I should—”

She was my child, my baby
, Sara wanted to scream, as isolated in her grief as she’d been in her marriage even when Lucy was alive.

Greg had cared more about billable hours at the firm than quality hours at home with their child. But he wasn’t the only one guilty of putting work before Lucy, and that knowledge tore a gaping hole in her grief anew.

“She’s with us, you know.” His tremulous smile grated. “Always.”

He tapped her lightly on the shoulder this time, not keen to repeat his mistake of hand contact, and she shrugged him off, compressing her lips to stop the angry, bitter words from spilling out in a blistering torrent.

Greg was full of crap, couldn’t stop it from flowing even at their daughter’s funeral.

Lucy wouldn’t be with them always.

She was in that repulsively small coffin with the hideous flowers and that’s where she’d remain until they buried her. Then she’d be in the cold, hard ground, subject to New York snow and Atlantic winds and the odd heatwave.

The seasons would change, every mourner in this church would grow older, but her precious Lucy would remain three forever.

Three,
dammit. Three freaking years old. Where was the justice in that?

An eerie silence fell over the crowd as Sara stepped up to the podium, taking care not to lean too close to the microphone as she’d been taught early in her career.

Though what did it matter if feedback screeched through the silence? It wasn’t as if Lucy would cover her ears and yell “Mommy!” like she always did when a stray fork scraped a plate during the washing up.

She swallowed, twice, desperate to clear the lump in her throat.

She had to do this.

Placing her hands flat on the podium, Sara studied her chewed nails, the ripped cuticles, and the faint tan line where her wedding ring had resided, testament to more guilt. More pain. More regrets.

The priest cleared his throat from the pulpit, a pointed prod for her to hurry along, and she dragged in a breath, several, before finally raising her head.

Oblivious to the crowd she stared at the coffin, her belly churning with a sickening mix of sorrow and revulsion, hollow yet twisted, her heart gripped in an icy fist that squeezed with relentless persistence.

Her baby was in that coffin.

Her gorgeous, cheeky, blonde-curled little girl who lisped, who laughed at anything on Nick Junior, who preferred Thomas the Tank Engine over Dora the Explorer. Who adored purple and despised pink. Who ate green vegetables over orange.

The lump in her throat expanded, slid down, wedging in her chest like a Sumo wrestler pinning her to a mat and sitting on top of her. She could barely drag in a breath but the longer she focused on the coffin the harder she fought.

Sara had to breathe, had to breathe for both of them, and just like that the air forced itself past the tightness in her windpipe and the words followed, tumbling from her icy lips.

“Lucy-Lou, we used to wish upon the stars every night. You wished for so many things. A pony, a trip to Disneyland, a Barbie fun house. I didn’t make any wishes because, cuddling you in my arms as we stared up at the sky, I already had my wish. I had you.”

Sniffles, a sob, punctuated her pause but she didn’t stop. She couldn’t. The tidal wave of agony was growing, bigger, faster, threatening to swamp her, to sweep her away from her baby, to whom she had so much more to say.

“But now it’s my turn, Lucy-Lou. Now’s my turn to wish. I wish I’d bought you those extra Happy Meals. I wish I hadn’t told you off for splashing in the bath all those nights. I wish I’d taken you to the park those sunny days rather than placing you in front of the TV so I could squeeze in extra work.”

The sobs grew louder but she was on a roll, the words spilling as swiftly as her tears.

“I wish I’d let you wear those awful, patched purple overalls you loved so much every day, rather than forcing you to wear sensible clothes to preschool. I wish I hadn’t yelled at you every time you wanted ice cream before dinner. I wish I hadn’t worried so much about what you were going to be when you grew up and concentrated more on making the most of every minute we had together.”

Greg half stood, took a step toward her, and she realized the loud, heart-rending sobs weren’t coming from the congregation: they were bubbling up from deep within her.

Her fierce glare succeeded in placing his butt back on the pew, so she refocused on that obscenely inanimate box of wood, and pictured her daughter smiling and holding out her arms for the last cuddle of the night.

“But most of all, Lucy-Lou, I wish you were here with me now. That I could hold you, squeeze you and tell you how much I love you. You’re my world. I’ll watch for your star. Always.”

Sara collapsed against the podium, her legs boneless, her head smacking the microphone with a thud. The crowd’s audible gasp receded as Greg leaped to the rescue, supporting her weary body as he led her back to her seat.

Too little, too late. Where was he when their daughter needed rescuing, needed saving, needed a father?

“Save it,” she hissed through gritted teeth, shrugging off his comforting arm, dashing away the tears streaming from her stinging eyes.

He’d push for a reconciliation—she knew him—but hopefully somewhere during their seven-year marriage he’d learned a thing or two.

Like the fact that Sara valued actions more than words. That all the slick charm and polished promises meant little if he didn’t follow through. That love involved more than expensive floral bouquets and chocolates. That seeing him spend quality time with their daughter would’ve melted her hardened heart more than the obligatory goodnight kiss he’d plant on Lucy’s forehead when he eventually got home every evening.

Sure, he’d been supportive after Lucy died, solicitous to the point of overbearing. She’d appreciated his presence, their blinding grief the only thing to unite them. To his credit, he’d stood up in the crisis, organizing the funeral and the wake. Taking care of everything when it took all her energy to lift her head off the pillow in the morning and drag on some clothes.

But it wasn’t enough. Not when their marriage had been struggling before Lucy’s death.

The mantra echoed again through her aching head:
Too little, too late . . .

The rest of the service passed in a blur. She didn’t hear a thing apart from her silent, fervent wishes, wishes no one could hear, least of all her child lying lifeless in that damn box.

The achingly poignant rendition of Ave Maria, sung by one of Greg’s dorky colleagues, pierced her sorrow for a few moments, serving only to make her cry harder, her heart fragment further.

Then it was over.

The drive to the cemetery, the frigid wind whipping the leaves against her legs, the droning of more meaningless words by a robed priest who hadn’t known her little girl at all, the wake back at their apartment where well-wishers patted her back and kissed her cheeks and couldn’t quite look her in the eye, sapped what little energy she had until she made a run for it, slamming the bedroom door shut before collapsing on the bed.

It took her a full two seconds to realize it wasn’t her room.

She’d stumbled into Lucy’s messy, lived-in, preschooler’s room. Stricken, she grabbed Snuffly, Lucy’s squishy, one-eared dog, and hugged him to her chest, tight. Rocking back and forth, tears spurting, sobs ripped from so far down in her soul she wondered how she’d ever continue living.

Greg slipped into the room and rested his back against the door, the distance between them indicative of the last few months—the last few years, if she was completely honest.

“Don’t you dare say I need to pull myself together.”

She jabbed a finger in his direction, clutching Snuffly with the other hand, drawing strength from the tenuous link to Lucy. Crazy, using a stuffed toy animal to face up to her husband. Giving her courage to say what should’ve been said a long time ago.

His pained expression irritated her and fed the well of resentment that bubbled from a long-festering source.

“And stop damn well looking at me like that.”

“I’m doing the best I can.” He dragged a hand through his hair, the messy blond spikes annoying when they’d once been endearing. “What do you want from me?”

“Nothing.” Even now, he didn’t have a clue. “Absolutely nothing.”

The burning anger gnawed at her, urging her to berate him, to castigate him, to hurt him as much as he’d hurt her over the years.

Then she made the mistake of glancing down at the dog, with its skewed, sewn-on red cotton eyes and button nose and lolling felt tongue. An ugly, pilled, fluffy toy with the life squeezed out of it. The memory of placing Snuffly in Lucy’s welcoming arms every night slammed into her, eradicating her fury toward her husband.

Their marriage was over. Had been over for years. With Lucy around, they had been able to pretend that they were a family. Hanging their hopes on the occasional outing together on a Sunday. The rare dinner when they all sat down at the dining table and made small talk. The fleeting moments where they made eye contact and smiled in unison over something funny Lucy had done or said.

But with Lucy gone, Sara couldn’t pretend anymore. Her love for Greg had dwindled to affection, the kind she might have for a best friend. Without Lucy, they were housemates, nothing more, and she couldn’t tolerate it any longer.

She could have said so much to him in that moment but why rehash the pain? There was enough of that going around today for everybody.

He must’ve seen something in her face, a clue to her ambivalent feelings, because he blanched.

He took a step toward her and she held up her hand to ward him off.

She flinched at his harsh tone and hugged Snuffly tighter, caught his muttered curse as he jammed his hands into his pockets, shoulders drooping.

He looked as weary, as battered, as resigned as she felt, and the faintest flicker of empathy blossomed as he pinned her with his custom-made, specially-for-her, accusatory glare.

She wanted the one thing she’d craved since that devastating phone call had been relayed to her and ripped an irreversible, irreparable hole in her heart.