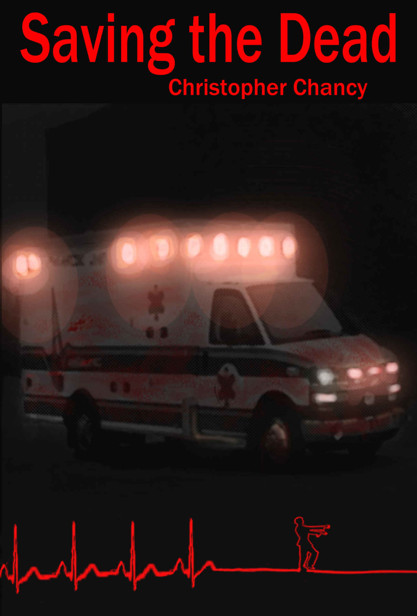 Dedicated to all those who serve on humanity’s front line as first responders.  These brave men and women rush to the blood, trauma, and pain, to take on the burdens that are not theirs to bear.  Why?  Because they just want to make the world a better place.   Thank you for your service.

This is a work of fiction.  All characters and events portrayed are fictional, and any resemblances to real people living or dead or incidents is purely coincidental.

“Leo, you have a student today.”

Ramirez dropped his head and groaned.

His partner, Samuel Drifts’s, response wasn’t so quiet. “Aww, John!  What the fuck, man?  This is our fifth student in a row.  Can’t we just go out and do our jobs without having to babysit a bunch of wide-eyed idiots?  I mean, every one of them was worse than useless, well except that blonde girl, what’s-her-name.  She had her (heh) qualities.”

Ramirez looked up at his partner and said, “Sam, you know you’re no longer allowed to my house when my oldest daughter, Maria, turns eighteen next year, right?”

Drifts smiled at him. “You only tell me that once a shift.”

Operations Chief John Sutter, their supervisor, watched the exchange indifferently.  He had seen their act before. “Well, this isn’t another impressionable girl.  Sorry, Sam.  His name is Justin Colbert.  This is his first ride along.  Sorry, Leo.”  This time both Drifts and Ramirez groaned. Sutter continued, “He’s waiting by your rig.  Enjoy your Preceptor duty.”

Ramirez sighed, shaking his head of graying hair.  He gathered his insulated cup of coffee and crossword puzzle. “Come on.  Let’s get this over with.”  He turned for the door while his partner young enough to be his son watched him go in open disbelief.  He shouldered his backpack over his muscular tattooed arm and reluctantly followed.

Outside Sutter’s office was the ambulance bay.  A few of the other night shift crews were checking their rigs out as a few of the day shift crews brought theirs in.

“You’re just going to take this?” Drifts complained. “We could have tried to argue our way out of being saddled with another student.”

“It’s John, you’re not going to change his mind,” said Ramirez.  Drifts shut his mouth as he conceded the point.

Together they went into the supply office.  Ramirez as the paramedic on their crew checked out their narcotics and anti-venom.  Drifts as the EMT who could not take responsibility for the drugs, took it upon himself to check out the radios and spare batteries for their equipment.

Drifts inspected his titanium handled flashlight.  The tube was slightly dented, but the light worked.  “Do you need any batteries for your flashlight?”

Ramirez took out his similar flashlight from his own belt loop and tested the light. His was also had several dents from its secondary use. “I’m good.”  He slid it back into his loop.

“What rig do we have today?” Drifts asked.

Drifts asked. “Are you going to give him the speech?”

As they reached where ambulance Triple-Three was parked, they were approached by a lanky kid with shaggy hair. “Hi,” the kid said enthusiastically. “I’m Justin Colbert. You’re Mr. Ramirez and Mr. Drifts, aren’t you?   Mr. Sutter told me I’ll be riding with you today.  I’m really excited to be here.”

Drifts groaned then looked at Ramirez. “You deal with him, Leo.  I’m going to set up the truck.”

He pointedly walked around Justin to the driver side of the cab.  Justin watched him go with an anxious expression.

“How old are you, Justin?” asked Ramirez.

“You don’t need to call me sir, Justin.  We’re pretty informal here.  Call me Leo, my partner’s name is Sam.”

“I don’t know,” Drifts called back from the cab of the rig, “you can call me sir if you want.  Mr. Drifts also has a nice ring to it.”

Ramirez ignored him. “The thing is, Justin, if you want to ride with us, there are six rules you need to abide by.  If you can’t follow our rules, then you can’t come out with us I don’t care what ‘Mister’ Sutter says.”

“All right, then.  Rule number one:  We don’t do anything to get ourselves killed.” Justin’s eyes bulged.

Ramirez went on, “Rule number two:  We treat everything as if we’ve already seen it three times that day, whether it’s a drunk on the street or a pediatric code.”  Justin nodded.

“Rule number three:  If you see anything that does disturb you, let us know.  We’ll talk about it.  Every one of us has seen things on this job that have stayed with us forever.  It happens.  If you need to, we’ll be done for the day.

“Rule number four: Just because we arrive on a scene doesn’t mean that you get to get out of the rig.”

“Really?” asked Justin with a mix of skepticism and disappointment.

“Good,” said Ramirez. “Go ahead and set yourself up in the back of the ambulance or box as we call it.  Most students sit in the captain’s chair.  It swivels around so you position yourself right behind Sam and me in the cab.”

After Justin loaded up his backpack, Ramirez gave him a quick rundown on where the equipment was stored.  He didn’t expect him to remember.  Students never did.  He finished with the final piece of equipment saying simply, “This is the hot-drill.”  It looked like a normal power drill except that it had a box like device by the drill bit.

“Not if we can help it,” Drifts said from the driver’s seat.

“We do deal with the walking dead more often than the general public, but we try not to interact with them without police presence.  Still, miscommunication happens, and when it comes down to it, we walk into the same situations that police do, except we don’t carry guns.”

“I still think we should,” said Drifts.

“No thanks,” said Ramirez. “I carried one for a while after the outbreak.  I don’t want ever to do that again.”

“Whoa!  You worked during the outbreak?” asked Justin.

Both Ramirez’s and Drifts’s pagers suddenly went off as the radio called, “Unit Three-Three-Three.”

Ramirez sat down in the passenger seat and opened the map book.

Drifts sneered. “Dammit!  I hate getting a call fresh out of the chute!  Tonight is going to fucking suck, I know it!”  He picked up the mic and in a somewhat calmer voice said, “Triple-Three.”

The dispatcher replied, “Start for Matheson and Twelfth on a sick.”

“Motherfuck!” shouted Drifts. “Why the fuck are they wasting our time?”  His voice became pleasant again. “Responding Matheson and Twelfth.”

The dispatcher gave the specific address, and Ramirez gave Drifts the best route he saw in his map book.  Still muttering, Drifts put the ambulance in drive and hit the lights and sirens as they drove out of the massive garage.  The company was located at the top of a hill that overlooked the city beyond. Darkness, like a shroud of misery, loomed over the metropolis attempting to strangle its light.  The strobes of their lights washed over the world around them.

Justin sat forward in his seat, watching Drifts weave the ambulance in and out of traffic with nothing short of awe.

“Listen kid, I know you’re about to blow your wad in all of the excitement,” griped Drifts, “but could you please contain your enthusiasm?”

Justin deflated a little. “Oh okay.” After a few minutes Justin broke his silence. “Excuse me?”

Ramirez pointed. “Sam, take a right on Manes. It should be the street after Mankiewicz.”  He looked back. “What is it, Justin?”

“What kind of call are we going to?” Justin asked.

“I’ll tell you what kind of call we’re going to,” growled Drifts. “We’re going to see someone who’s ‘sick!’  That means that this person is either too lazy or too stupid to contact their personal physician.  Or better yet, they don’t have any other doctor except the emergency room physicians.   So guess what!  They use us as their personal taxi to get them to the hospital!  Fuckers!  We waste so much time on people like this that we can’t help those who truly need us, like gunshot victims and people having heart attacks!”

Justin, thinking the grouchy EMT was pulling his leg, looked to Ramirez. “Is that true?”

Ramirez nodded. “I wouldn’t put it with as much passion, but what Sam says is more or less true.”

After a few moments, Justin asked, “Aren’t you guys ever afraid?”

Ramirez looked back at him. “What do you mean?”

“Aren’t you afraid of the zombies?” asked Justin.

Ramirez shook his head. “I respect the threat that they pose, so I’m careful around them, but I’m not particularly afraid of them.”

“The dead walking towards you doesn’t creep you out?”

“Well sure it does, but after all the hordes I saw during the outbreak, I’m a little more desensitized to it. Yes, a group of zombies can tear you to pieces in less than a minute if you get surrounded.  After they turn, their bites and body fluids are instantly infectious.  So we wear personal protective equipment and try not to get bitten.”

“And if a patient dies you have to be sure to drill the fuckers in the head,” Drifts chimed in. “Regardless of whether you’re bitten or not, once you kick the bucket you’re going to reanimate into a mindless carnivore.”

“The trick with zombies,” Ramirez continued, “is that you have to keep your wits about you at all times, and in this line of work that just comes with the territory.  Besides, a zombie’s presence is not hard to spot. They’re stupid and except after they initially turn, pretty slow.  They’re not quiet and they stink to high heaven.  So as long as you’re paying attention, they shouldn’t be able to catch you off guard.”

“But when they first turn, you have to watch out,” added Drifts, “They can run at a full sprint for miles because they don’t get tired.  That’s when things can get dicey.  You remember that gang shooting two years ago, Leo?”

Justin enthralled. “What happened?” he asked.

“There was a shootout between two gangs at a house.  Must have been a drive-by because one side definitely got the worst of it.  Anyways, none of the gangbangers were shot in the head, but plenty were killed.  Well, it was chaos.  We had, like, seven dead teenagers come barreling out of that house at us like track stars.  We came so close to a miniature outbreak right then and there.  Ramirez here saved me from becoming a dead man’s happy meal.  After everything was cleaned up, they found three more almost completely-consumed bodies in the house.”