Read Scandal With a Prince Online

Scandal With a Prince 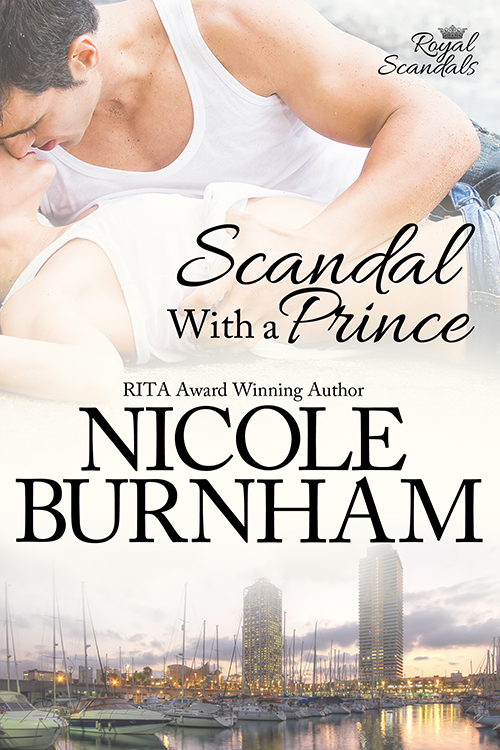 Scandal With a Prince

Names, characters, places, and incidents are either products of the author's imagination or used fictitiously.

Any resemblance to actual events, locales, or persons, living or dead, is entirely coincidental.

No part of this publication can be reproduced or transmitted in any form or by any means, electronic or mechanical, without express permission in writing from the author or publisher.

Certain men possess voices so richly captivating, so drenched in sexuality, that they can bring a woman to her knees with a few simple syllables.

In a crowd of hundreds, it was the sound of one such voice that caught Megan’s attention first.

Her stomach seized the instant her ears picked out the distinct timbre amongst the din of merry voices echoing through the packed rotunda of the newly-renovated Barcelona Grandspire Hotel.

Around her, men and women went on sipping
cava
from crystal flutes as they discussed upcoming business deals or renovations to their vacation homes.

On the surface, all appeared unchanged.

It was a perfect late spring night in a perfect city, and thus far the hotel's grand reopening celebration was a resounding success.

Then she heard it again.

Only three or four indistinguishable words, but they hit her gut with the same force as a sucker-punch from a male twice her size.

A well-built male like Prince Stefano Barrali, whose third-in-line claim to the throne of Sarcaccia meant he enjoyed immeasurable wealth and connections without the pressures that usually accompanied them, while possessing the Mediterranean good looks and sultry charm that often did.

A few feet away from Megan, a gray-haired gentleman and his much younger wife cast subtle glances toward the hotel's side entrance, the one used when high-profile guests needed to make an inconspicuous arrival or exit.

Megan resisted the urge to follow suit, but a breath later the overall volume in the lobby rose even as men tall enough to see over the crowd leaned closer to their companions to whisper into diamond-studded ears.

Not here, not on the biggest night of her career to date.

Without allowing her smile to drop or the cadence of her speech to change, skills honed by years of professional banter at events such as this, Megan continued her conversation with Mahmoud Said, the CEO of a large Egyptian telecommunications company, giving him an overview of the beachfront hotel's state-of-the-art conference and special event facilities.

At the same time, she strained to catch the familiar sound once more.

Perhaps the voice existed only in her mind, a stress-induced result of the months of work that had gone into tonight's soiree or a trick caused by the rotunda's domed roof.

No, even as Mahmoud asked a question about the hotel's business center, she accepted that she'd ceased imagining Stefano's flirtatious, luxuriant voice years ago.

In all probability, the sound emanated from one of the televisions mounted over the bar in the cocktail lounge adjacent to the lobby.

Though the bartender had been instructed to keep the sets muted in keeping with the formality of the night's celebration, with so many people crowding the lobby it wouldn't take much for a remote control to get bumped the wrong way or for a guest to assert herself and tune in to a report about a celebrity—or hot young royal—who caught her eye.

The Grandspire's manager, Ramon Beltran, circled through the crowd near Megan, patting shoulders, shaking hands, and accepting congratulations as he went, before he ascended the lobby's grand staircase to cascading applause.

With a sweeping gesture, he sounded a ceremonial gong calling the guests to attention.

"Ladies and gentlemen," he announced as the reverberation faded, “thank you for attending our celebration tonight.

We’re honored to have so many friends and family of the Grandspire share this important evening.

Dinner will now be served in the Gaudi Ballroom.

I hope you enjoy both the meal and the view."

A pair of waiters opened the doors to reveal the ballroom's all-new floor to ceiling windows, which overlooked an immaculate beach and the Mediterranean Sea beyond.

The resulting spike in conversation obliterated any chance Megan had of pinpointing the source of Stefano's voice.

Mahmoud excused himself to check on a friend, providing Megan the opportunity to conduct a discreet surveillance of the expansive marble lobby.

Keeping her demeanor pleasant and professional, she scanned the faces of the well-heeled men in attendance, most of whom now escorted exquisitely gowned women past the lobby's large floral arrangements and into the ballroom.

The face that matched the voice didn't materialize.

She exhaled, directing her nervous energy toward smoothing the silk fabric of the honey-colored cocktail dress she'd purchased especially for tonight, but her stomach remained unsettled.

At a signal from Ramon, Megan made her way against the tide of guests to encourage the attendees still clustered in the sunken bar area on the far side of the lobby to join the rest of the crowd in making their way to dinner.

All around her, air kisses were exchanged, lunches suggested, and holidays arranged as guests mingled.

Gossip snaked its way through every conversation.

It was exactly the type of event where one expected to find Prince Stefano being courted by the movers and shakers of major corporations and high society, all of whom hoped that making inroads with the Barrali royal family would help them gain access to the family's vast financial and social network.

However, as the Grandspire's head of business development, Megan had combed through the guest list for tonight's soiree more than once and Prince Stefano's name wasn't on it.

It would not have escaped her notice.

As she descended the wide steps leading to the lounge area, Megan's gaze flicked to the bank of televisions mounted high over the sleek granite bar.

The bartender, a sociable young Catalan with a knack for attracting female attention, watched alongside a curvaceous blonde guest who gasped at the blaring announcement of a popular Spanish soap star's pregnancy with twins.

A sense of relief washed through Megan.

That must've been it.

It wouldn't be the first time Stefano spoke to her from a television.

The bartender glanced from the buxom blonde to Megan, shooting Megan a disarming
what can you do?
grin before fiddling with the remote to mute the sound and return the television to its usual sports station.

Megan arched a mischievous eyebrow at him, then at the blonde’s back, before stretching her toes inside her new gold heels to release the tension of the last few hours.

She couldn't blame herself for being on edge.

Tonight's event was the culmination of five years of hard work.

Given that investment of time and energy, together with a shortage of sleep this past week while the final preparations were made, she should've expected her nerves might get the better of her.

She needed to take a cue from both the bartender and the guests lingering nearby and relax.

The best way for her to showcase the refurbished hotel to the potential business clients in attendance would be to visibly enjoy the Grandspire herself—tonight's dinner, the art exhibition, the rooftop fireworks, all of it—and consider it a reward for a job well done.

After all, she'd already booked eight major conferences and over two dozen smaller events for the coming months, enough to kick-start the hotel's income stream and gild her resume before she sought her next position.

Invigorated at the thought, she made her way to each of the seating areas in the lounge and introduced herself to those guests she didn't already know before directing them toward the ballroom.

One by one, empty glasses filled the bar top as the partygoers progressed to dinner.

However, a cluster of people remained near the fireplace, their attention riveted on a male seated in their center.

Megan hated to interrupt, but couldn't see past those who were standing to identify the speaker.

Only his highly polished shoes were visible between the high heels and wingtips of those surrounding him.

A man making his way toward the stairs glanced toward the fireplace when he thought no one was looking, though his partner, a woman whom Megan recognized as the owner of a major shipping company, stared openly, apparently unconcerned that others would notice her fascination with the conversation taking place.

The knot returned to Megan's stomach, twisting tighter than before.

Everyone in attendance tonight was accustomed to the trappings of money and fame.

Whoever sat near the fireplace held a special allure, even amongst the social elite, the kind often reserved for royalty.

And
always
reserved for good-looking royalty.

A familiar rumble of laughter cut through the lounge, confirming her fear.

Low, sexy, and even more inviting than Megan remembered, if such a thing were possible.

Her knees softened and the floor seemed to sway beneath her.

After their last face-to-face meeting, she'd spent weeks trying to contact Stefano, using every means at her disposal, but now she needed nothing more than to escape.

Seeing him in the flesh would make her want everything she knew she could never have, and she did not want to
want
.

Wanting Stefano could mean losing everything.

She took a step backward and started to turn away.

She'd ask the bartender to send the group to dinner, then figure out how she could possibly avoid the prince for the rest of the evening so she could keep her attention where it needed to be:

Stefano's presence wouldn't distract her unless she let it.

The telecommunications CEO she'd spoken with earlier appeared at her elbow, propelling her back toward the fireplace.

"Have you had the opportunity to meet my guest?

I didn't wish to say anything until I knew he'd arrived."

Mahmoud's voice dropped to a whisper as he added, "You know these types.

You cannot always count on them to appear when they say they will."

Black Angus by Newton Thornburg
Goddess of the Rose by P. C. Cast
Introducción a la ciencia II. Ciencias Biológicas by Isaac Asimov
School for Love by Olivia Manning
Shipmate: A Royal Regard Prequel Novella by Mariana Gabrielle
The Other Ida by Amy Mason
Kentucky Showdown by J. R. Roberts
The Fugitive by Pittacus Lore
The Dark Ones by Smith, Bryan
For the Night: Complete Box Set by C. J. Fallowfield