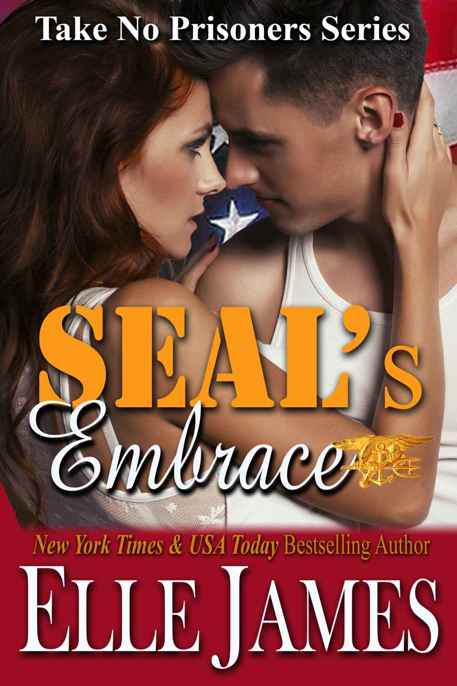 All rights reserved. No part of this publication may be reproduced, distributed or transmitted in any form or by any means, or stored in a database or retrieval system, without the prior written permission of the publisher.

Our Navy SEALs are highly trained fighting men who aren’t afraid to charge into any situation and would do anything for a fellow teammate. These are incredibly brave men whose skills, minds and bodies are honed and ready for any assignment.

The Critical Air Transport Teams (CCAT) are crucial in the struggle to bring our wounded military personnel home alive. Working in a mobile Intensive Care Unit on board an aircraft is challenging and the doctors, nurses who rise to the challenge are amazing. Because of their work, many lives are saved and families are reunited.

Next time you get a chance, thank our military personnel. They do so much to keep us free and safe from harm. I love them all!

Other Titles by Elle James

“C
how will have
to wait.” Navy SEAL Chief Special Warfare Operator Caesar Sanchez hurried out of the relocatable unit he shared with Declan “Irish” O’Shea at Bagram Airfield in Afghanistan. “I cut my finger and need to have it looked at before infection sets in.” He held up the finger. A minuscule cut oozed blood from the tip.

“Isn’t that the same finger you cut two days ago?” Irish fell in beside Caesar.

“Yeah. So? No need to go with me. I’ll meet you in the mess hall in fifteen.” Caesar didn’t slow in his hurry to reach the hospital. Air Force Lieutenant Erin McGee had volunteered again to assist at the outpatient clinic that morning and he wanted to see her. Her duties as one of the flight nurses that flew the Critical Care Air Transport missions meant catching her in the hospital was hit-and-miss. He’d gotten word from Fish, their Navy SEAL Corpsman who also volunteered in the clinic, she was there right now helping out.

Irish snorted. “That pretty LT must be there, or you wouldn’t be in such a hurry. I’d better tag along to keep you out of trouble.”

Caesar pressed his lips into a thin line. “I don’t need a babysitter.”

“Look, Nacho, the woman isn’t that into you.”

Stopping in midstride, Caesar slammed an arm across Irish’s chest. “What do you know about Lt. McGee?”

Irish eased back a couple inches. “If she wanted to see you, she’d let you know.”

“She doesn’t yet know that she wants to see me. That’s what I’m working on.” He resumed his march toward the Craig Joint Theater Field Hospital. “The more she sees me, the more she’ll miss me when I’m not there.”

“Man, you have it bad.” Irish chuckled. “The more you see her, the more she’ll be convinced you’re a stalker.”

“There you go thinking with your dick. You’re just mad because she’s the one woman you haven’t charmed out of her panties.”

With a frown, Caesar turned a corner between buildings and crossed Disney Drive to the hospital. “That’s not the point. She’s special.”

“How many times have I heard you say that?” Irish double-timed a couple steps to keep up.

“Yeah. Heard that one, too.” Irish whistled as he walked alongside Caesar.

Why the hell doesn’t Irish give up?
“Really, I don’t need your assistance.”

“You’re just afraid she’ll fall for me instead.”

Caesar stopped cold at the entrance to the clinic and narrowed his gaze. “On second thought, maybe you should wait out here for me.”

“No way. There’s more than one pretty nurse inside that hospital. I came this far, I might as well check them out.” He shoved his sleeves up enough the Celtic tattoos on his biceps were clearly visible. The man, like all his teammates, was muscular, with thick arms and thighs from the strenuous training required of Navy SEALs. And like the rest of them, he had tattoos commemorating ops or events that had particular meaning to all team members.

“Fine. Check out the other nurses, just stay out of my way with Lt. McGee.” Caesar pushed through the door and entered the clinic. The space teemed with at least a dozen men and women in duty uniforms or PT uniforms. He should have expected the crowd. If Erin was helping out, they needed the extra pair of hands.

He signed in at the desk. The young woman taking his information batted her eyes and flirted with him the entire time. He barely saw her, his gaze busily searching for Lt. McGee.

The receptionist pouted and asked him to take a seat.

Caesar sat beside Irish and waited his turn, keeping an eye open for his LT. The auburn-haired nurse wouldn’t be hard to spot, as soon as she came out from the examination rooms.

“How about that one?” Irish pointed at a blonde wearing an Air Force desert camouflage uniform and boots. Her hair was pulled back in a tight little bun, all strands neatly pinned flat.

Caesar recognized her as the no-nonsense shift supervisor. Young, but tough enough to chew up grunts and spit them out for fun. A smile slipped across his face. “Nice. You should go for her.”

“Thanks, man. I think I will.” Irish strolled to the desk, wearing his most charming smile.

He was back in less than a minute, his smile forced. “You could have warned me.”

Crossing his arms, Caesar gave him a twisted grin. “Why, when I could watch you suffer the wrath of Lt. Baumer. She’s as pretty as they come, but her words can cut like a fillet knife.”

“I noticed. I think she took off half my ass.” Rubbing his buttocks, he turned and faced the woman who’d set him in his place, his eyes narrowing.

“What?” Irish raised his hands, his expression all innocence.

“I have no idea what you’re talking about.”

Lt. Baumer glanced across the room at him, her brows dipping.

Irish gave her a full-on, you-gotta-love-me grin and winked in her direction. “Challenge accepted. Game on.”

“I’m afraid you’ve met your match with this one.”

“One hundred bucks says I’ll have her eating out of the palm of my hand by the end of this tour.”

“You’re on.” Caesar stuck out his uninjured hand and the two shook.

“Sanchez,” a firm voice called out.

Caesar spun, his pulse ratcheting up as he faced the woman he couldn’t get out of his system.

Irish backhanded him in the chest. “I think you’ve met your match in that one.”

By the way Lt. McGee was shaking her pretty red head, Irish might have it right. What Irish didn’t realize was just how much Caesar had been working to break down the lady’s defenses. “Trust me, at this very moment, she’s on the brink of raising the white flag.”

“And her skirt?” Irish snorted. “I seriously doubt it. Wanna lay down another bet?”

“Sorry, I have to go. My future awaits.” Caesar took off across the floor, his focus on the petite nurse with deep auburn hair and emerald green eyes.

With her full, luscious lips pressed into a thin line, she led him deeper into the clinic to an examination room. All the way down the aisle, Caesar couldn’t help but notice the way her hips swayed beneath the flight suit that hugged her body like a tailored glove.

His groin tightened along with his resolve to have this beauty.

“Sit,” she ordered, pointing to the examination table.

Caesar hopped up on the table and spread his knees wide. The only way she was getting to that cut finger was to step between them. Still wearing his PT shorts, he realized the mistake that was. With nothing much to hold him back, he tented the shorts in an instant when the door closed to the room and they were alone.

“You really have to stop cutting yourself. This camp is full of all kinds of germs. Keep this up and you might lose that finger altogether.” She pulled a gauze pad out of a drawer, alcohol pads and a bandage before she turned and met his gaze, her own green eyes dancing with humor. “And the answer is no.” She pressed her lips together.

“How did you know I was about to ask a question? I might really be here to seek aid for my cut finger.”

“Uh huh.” She shook her head and stepped between his knees. “Two times in the same week is suspicious. Three times cutting the same finger, and that the injuries just happen to be on the same days as I’m volunteering at the clinic, is proof. You’re stalking me.” She bumped the inside of his thighs with her hips and sucked in a sharp breath, moving back quickly, her cheeks turning a rosy shade of pink.

So, she wasn’t immune to his presence. She just needed a little persuasion.

“Lt. McGee,
mi amor,
I’m crushed.” He pressed his uninjured hand to his chest. “Can I help the fact that I’m clumsy and deeply in love? Have coffee with me just once, and I won’t bother you again.”

“What do you know about love?” She pushed a loose strand of red hair behind her ear, twin flags of pink flying high on her cheekbones. “And I only have two words for you: fraternization and sexual harassment.”

“Yeah, I know, but with you, they all go together.” She swiped the alcohol pad across his finger, careful not to sway sideways and touch his thighs.

At the sting, Caesar bit down on his tongue to keep from hissing.

Two seconds later, she had the wound cleaned, and a bandage plastered over it. “There. Your booboo is all better.”

Before she could move away, Caesar hopped off the table and captured her wrist. “What do I have to do for you to look at me as other than a patient?” They stood so close, he could feel the heat of her body through the flight suit.

Her free hand rose to his chest, her eyes widened and her breathing grew more ragged. “An act of God?” She wet her lips.

That simple act sent Caesar over the edge of reason and he swooped in to steal a kiss. “Rules be damned.” He captured the back of her head, and bent to crush his lips against hers.

For a moment her hand pressed against his chest, then her fingers curled into his T-shirt and her mouth opened on a gasp.

Caesar thrust his tongue through, sliding it along hers in a long, wet caress. She tasted even sweeter than he’d imagined. When he lifted his head, he whispered against her mouth, “
Muy precioso.
”

Dance With Me, Baby: A Yeah, Baby Novella by Fiona Davenport
Blooming Life (Fate's Intent Book 10) by Bowles, April
Creations by William Mitchell
Washika by Robert A. Poirier
Three to Get Deadly by Janet Evanovich
Stone's Kiss by Lisa Blackwood
The Patriots Club by Christopher Reich
The Inspector and Silence by Hakan Nesser
The Land Leviathan (A Nomad of the Time Streams Novel) by Michael Moorcock
Vaewolf: Damn the Darkness: The Prophecy's Promise (Hearts of Darkness Book 3) by Eliza March