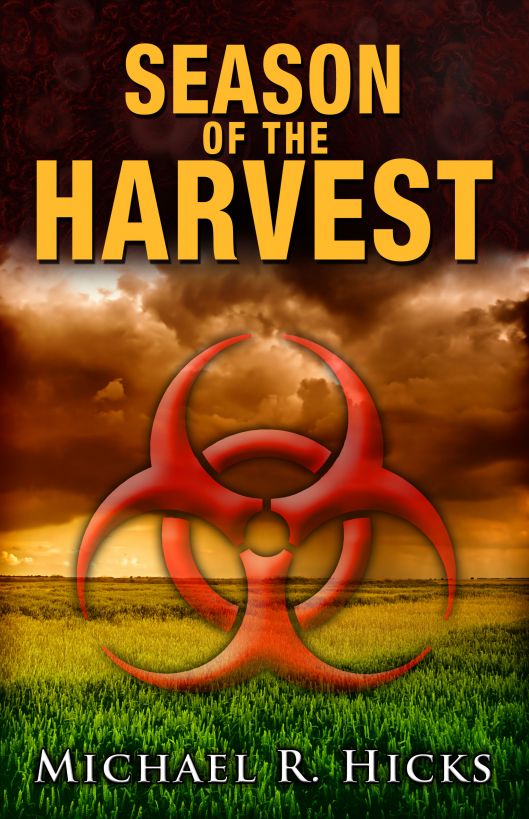 SEASON OF THE HARVEST

This is a work of fiction. All of
the characters, organizations and events portrayed in this novel
are products of the author’s imagination or are used
fictitiously.

SEASON OF THE HARVEST

All rights reserved, including the
right to reproduce this book, or portions thereof, in any
form.

The
In Her Name
Series

Legend Of The Sword

In Her Name: Redemption

In Her Name: The Last War

Season Of The Harvest

and the loved ones they left
behind.

And for Dona: we miss
you.

Just sitting there on the page, the
term sounds exotic, doesn’t it? Like something out of a science
fiction story. You may have heard about them, or you may not. But
one thing’s for certain: unless you eat only organic food, you’ve
probably put a genetically modified organism in your mouth and
eaten it. Many times. Corn. Soy. Rice. Wheat. And
others.

There are companies here in the
United States and in other nations that have modified the genetic
material of many of our most basic food crops to be fundamentally
different from their “natural” siblings. Strains of these crops
have been engineered to be resistant to certain herbicides, or to
repel insect pests. To need less water. To grow faster, or larger.
Human engineering has improved on the work of Nature, tailoring
these vital plants to our needs. It’s a multi-billion dollar
industry that controls an ever-larger share of the world’s food
supply, for the benefit of people everywhere.

And we know that GMOs are safe for
us, for our children. For the animals we depend on for our protein.
We know this because the companies that produce these wonder crops
say so. The government agencies responsible for the safety of our
food supplies say so. Therefore, it surely must be true.

Genetically
modified organisms.
You are what you
eat…

As with any book, the author is only
the tip of the iceberg in taking a huge pile of words and
transforming them into something both readable and (I hope!) worth
reading.

First I have to thank my editors,
Mindy and Stephanie, who spent a great deal of their time wading
through the original manuscript while trying not to laugh too hard,
and with nothing more awaiting them in compensation than some
chocolate, an autographed copy of the book, and a t-shirt. You’re
both gems and when I strike it rich someday, I’ll make it up to
you.

Next up is my Dad. While my parents
have always been supportive of my writing (they even claim to have
liked some of it), Dad provided some real sanity checks on some of
the more technical parts of the book from his background in
pathology and microbiology.

I’d also like to credit
“Groundskeeper Pete” for the amazing information he contributed
from his web site on the Cold War-era Titan I base that I used as
the setting for certain key scenes in the book. Check out
www.chromehooves.net – it’s some truly amazing stuff.

Then there are my “beta readers,”
Susan, Geoff, Starfire, and fellow author Margaret Anne Lake, who
helped put the final touches on the book. Thank you so much for
your time and support – you’re the best!

Finally, but never last or least, is
Jan, my wife. Thank you for all your support and your love. Without
you, I would have no dreams.

Sheldon Crane ran for his life.
Panting from exhaustion and the agony of the deep stab wound in his
side, he darted into the deep shadows of an alcove in the
underground service tunnel. Holding his pistol in unsteady hands,
he peered around the corner, past the condensation-covered pipes,
looking back in the direction from which he’d come.

Nothing. All he
could hear was the deep hum of the electric service box that filled
most of the alcove, punctuated by the
drip-drip-drip
of water from a small
leak in one of the water pipes a few yards down the tunnel. Only a
third of the ceiling-mounted fluorescent lights were lit, a
cost-saving measure by the university that left long stretches of
paralyzing darkness between the islands of greenish-tinged light.
He could smell wet concrete and the tang of ozone, along with a
faint trace of lubricating oil. And over it all was the scent of
blood. In the pools of light stretching back down the tunnel, all
the way back to the intersection where he had turned into this part
of the underground labyrinth, he could see the glint of blood on
the floor, a trail his pursuer could easily
follow.

He knew that no one could save him:
he had come here tonight precisely because he expected the building
to be empty. It had been. Almost. But there was no one to hear his
shouts for help, and he had dropped his cell phone during the
unexpected confrontation in the lab upstairs.

He was totally on his
own.

Satisfied that his pursuer was not
right on his heels, he slid deeper into the alcove, into the dark
recess between the warm metal of the electric service box and the
cold concrete wall. He gently probed the wound in his side, gasping
as his fingertips brushed against the blood-wet, swollen flesh just
above his left hip. It was a long moment before he was sure he
wouldn’t scream from the pain. It wasn’t merely a stab wound. He
had been stabbed and cut before. That had been incredibly painful.
This, however, was far worse. His insides were on fire, the pain
having spread quickly from his belly to upper chest. And the pain
was accompanied by paralysis. He had lost control of his abdominal
muscles, and the sensation was spreading. There was a sudden gush
of warmth down his legs as his bladder suddenly let go, and he
groaned in agony as his internal organs began to burn.

He leaned over, fighting against the
light-headedness that threatened to bear him mercifully into
unconsciousness.

Wiping the blood from his left hand
on his shirt, cleaning it as best he could, he reached under his
right arm and withdrew both of the extra magazines he carried for
his weapon, a 10mm Glock 22 that was standard issue for FBI special
agents. He ejected the empty magazine from the gun, cursing himself
as his shaking hands lost their grip and it clattered to the
floor.

It won’t matter
soon
, he thought giddily as he slumped
against the wall, sliding down the rough concrete to the floor as
his upper thighs succumbed to the spreading paralysis, then began
to burn.

Desperately racing against the
poison in his system, he withdrew a small plastic bag from a pocket
inside his jacket and set it carefully next to him. He patted it
with his fingertips several times to reassure himself that he knew
exactly where it was in the dark. His fingers felt the shapes of a
dozen lumps inside the bag: kernels of corn.

Then he picked up one of the spare
magazines and shucked out all the bullets with his thumb into a
pocket in his jacket so he wouldn’t lose them. Setting down the
now-empty magazine, he picked up the tiny bag and carefully opened
the seal, praying he wouldn’t accidentally send the precious lumps
flying into the darkness. For the first time that night, Fate
favored him, and the bag opened easily.

Picking up the empty magazine from
his lap, he tapped a few of the kernels onto the magazine’s
follower, the piece of metal that the bottom bullet rested on. He
managed to squeeze a bullet into the magazine on top of the corn
kernels. Once that was done, he slid the other bullets into place,
then clumsily slammed the magazine into the weapon and chambered a
round.

He took the bag and its remaining
tiny, precious cargo and resealed it. Then he stuffed it into his
mouth. The knowledge of the nature of the corn made him want to
gag, but he managed to force it down, swallowing the bag. Crane
suspected his body would be searched thoroughly, inside and out,
for what he had stolen, and his mind shied away from how that
search would probably be conducted. His only hope now was that his
pursuer would be content to find the bag, and not think to check
Crane’s weapon. He prayed that his body and the priceless contents
of his gun’s magazine would be found by the right people. It was a
terrible long-shot, but he was out of options.

His nose was suddenly assaulted by
the smell of Death coming for him, a nauseating mix of pungent
ammonia laced with the reek of burning hemp.

Barely able to lift his arms, his
torso nearly paralyzed and aflame with agonizing pain, Crane
brought up his pistol just as his pursuer whirled around the
corner. He fired at the hideous abomination that was revealed in
the flashes from the muzzle of his gun, and managed to get off
three shots before the weapon was batted from his faltering grip.
He screamed in terror as his pursuer closed in, blocking out the
light.

The screams didn’t stop for a long
time.

Jack Dawson stood in his
supervisor’s office and stared out the window, his bright gray eyes
watching the rain fall from the brooding summer sky over
Washington, D.C. The wind was blowing just hard enough for the rain
to strike the glass, leaving behind wet streaks that ran down the
panes like tears. The face he saw reflected there was cast in
shadow by the overhead fluorescent lights. The square jaw and high
cheekbones gave him a predatory look, while his full lips promised
a smile, but were drawn downward now into a frown. The deeply
tanned skin, framed by lush black hair that was neatly combed back
and held with just the right amount of styling gel, looked sickly
and pale in the glass, as if it belonged on the face of a ghost. He
knew that it was the same face he saw every morning. But it was
different now. An important part of his world had been killed,
murdered, the night before.

He watched the people on the street
a few floors below, hustling through the downpour with their
umbrellas fluttering as they poured out of the surrounding
buildings, heading home for the evening. Cars clogged Pennsylvania
Avenue, with the taxis darting to the curb to pick up fares,
causing other drivers to jam on their brakes, the bright red tail
lights flickering on and off down the street like a sputtering neon
sign. It was Friday, and everyone was eager to get home to their
loved ones, or go out to dinner, or head to the local bar. Anywhere
that would let them escape the rat race for the weekend.