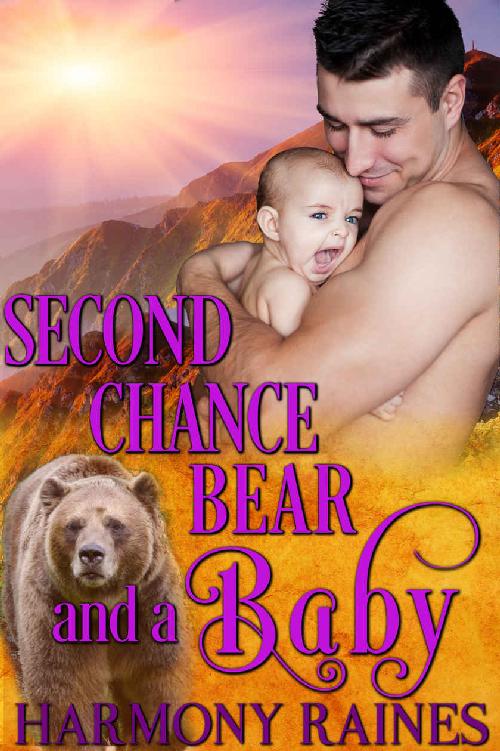 Second Chance Bear
and a
Baby

All rights reserved. This book, or any portion thereof may not be reproduced or used in any manner without the express written consent of the author or publisher.

This is a work of fiction and is intended for mature audiences only. All characters within are eighteen years of age or older. Names, places, businesses, characters and incidents are either the product of the author’s imagination or are used in a fictitious manner. Any resemblance to real persons, living or dead, actual events or places is purely coincidental.

And Receive a
FREE EXCLUSIVE BOOK

Plus special offers and new releases

Second Chance Bear and a Baby

Does a bear deserve a second chance?

Liam’s mate was murdered by a drug dealer. Now that same drug has given him a second chance. But will he ever find happiness? Can he live with the loss of one true mate, and learn to love another?

These are the questions Liam must find the answers to, if he is ever to become a second chance bear.

Carla first sees Liam sitting in the corner looking miserable, while all around him, his colleagues are celebrating finally destroying the drug dealers who have been selling Niq It. Drawn to him, she is surprised when he has a sudden change in personality and goes from seeing straight through her, to seeing nothing but her.

However, she soon discovers there is much more to her
party pooper
, than she ever imagined. Can she give this bear a second chance at love?

“Listen, Mike, I’m going to be late for work. I have to go.” Carla tilted her head, propping her phone on her shoulder as she opened her car door and got in. Putting the key in the ignition, she tried to avoid looking at the clock. She knew she was late, she didn’t need the small LCD screen to tell her how late.

“I understand, but there’s nothing I can do from here. I gave you my advice, and you chose not to take it. You two are old enough to work it out for yourselves.” She listened to him talking again, frustration growing inside her. “I’ll talk to you later.”

She hung up, leaving her brother mid-sentence, or mid-moan. Damn, she was sick of hearing him whine like a teenager, but then do nothing to help him or his wife, Tammy. He had married his childhood sweetheart, and a child of their own had soon followed, putting strain on their relationship for the first time. It was a brutal awakening to the real world, when they were used to the carefree days of college.

Sleepless nights, and a lack of money, had compounded to put so much strain on their fraught relationship that Tammy was threatening to move out. Deep down, Carla was sure Tammy was experiencing postnatal depression, but Mike wouldn’t accept it, and every time she had spoken to Tammy, she had brushed it off and said she was coping.

Carla was sure she was going to have to make the trip across country to the city they had moved to, with dreams of a bright life under the neon stars. A baby sure took that away from them. She sighed. She’d been harsh with Mike; she would have to call him back later and apologize. A sister mouthing off at him wasn’t what he needed. However, she had tried every other angle, and gotten nowhere.

Driving to work gave her a few minutes of peace, time to think things over and calm down. Her concerns for her brother and his new family were making her stressed and crabby; she needed to just head over there and bang their heads together. Or find some other way to make them see sense, perhaps if Tammy saw a doctor … or maybe they needed to move back home where their family could help them out with baby Sophia.

As she pulled up into the parking lot, she figured she might just as well ask for the time off now: her boss, Howie, was always good to her at times like these. They had known each other since school, and along with her coworker, Eloise, he had been by her side through all of the trauma of growing up.

He had seen how Carla had been preoccupied with this situation, and he was aware of how often she picked up the slack for the other waitresses, particularly Eloise. This was her first real family emergency in years, whereas Eloise must be on her twentieth, most of her own making, and usually involving a customer at Howard’s Steak House.

“Hey there, beautiful,” Eloise said, shimmying up to her.

“What do you want, Eloise?” Carla asked, giving her a quick hug before heading to put her purse away.

“There is a bar full of cute men out there, and the cutest is sitting at one of your tables. Sooooo, I wondered if you would swap for the night? If they tip big, I’ll give you half.”

“And who am I trading this cute guy for?” Carla asked, smoothing down her T-shirt and trying to ignore how the Steak House’s logo clung a little too tightly to her voluptuous breasts.

“Well, this is supposed to be a celebration, it’s the guys from the Sheriff’s department and some other guys, not seen them before. I think they cracked a big drug ring or something. Anyway, there is one guy who is just not in a celebratory kind of mood. A couple of other guys are with him. But talk about a party pooper.”

Carla laughed. “So you are saying he is right down my alley.”

Eloise frowned and looked offended. “Honey, I don’t know what alley you are down, but this guy beats you as a party pooper any day of the week.” She sashayed off. “So that’s OK?”

“Yes, Eloise. That’s OK. Just don’t go getting into some kind of trouble. I’m going to need a few days off to go and visit Mike.”

“Yep. I just want to go and check they are OK. Maybe try to persuade them to move back here. Would be so much easier to help them.”

“And a city is no place to raise a child,” Eloise said and opened the door to the bar, from where sounds of laughter floated out. It sounded like this celebration was in full swing.

A table with a party pooper suited her mood much better.

“Hi, Howie,” she said to her boss as she went through the doors to be confronted by a scene of celebration that was quickly escalating. These lawmen sure knew how to let their hair down when they were off-duty. Her gaze swept around the bar area. She could predict who were going to be the troublemakers, and badges or no badges, some of these men were trouble in the making.

Her gaze rested briefly on Eloise, who was flirting so hard it was embarrassing. Carla smiled to herself, wishing she knew how to be that carefree, before she turned to look around the rest of the room. At the sight of the man sitting in a corner, with two friends who looked awkward to be around him, the smile slipped from her face.

“Hi, Carla. Busy night tonight, you should do well, these guys like to leave big tips.”

“Huh?” she asked, her eyes still fixed on the guy who was obviously Eloise’s party pooper.

“Sure looks that way. I’d better get to work.” She smoothed down her skirt, which was a little too snug across her thighs, and headed into the fray. “What can I get you?”

So the first half an hour passed, her eyes constantly drawn to the party pooper, who was eyeing the exit door. There was something so sad about him, it was almost tangible. Eventually, curiosity got the better of her, and even though they didn’t need drinks, she went over to check on them.

“Hi there, fellas,” she said easily, trying to keep her gaze even so she was neither staring nor averting her eyes from the forlorn-looking man. She had practiced this enough to be an expert at it, but he was sorely testing her expertise. “Can I get you anything? The fries are a particular specialty of our cook.”

One of the others looked up at her and smiled good-naturedly. “If all you have to recommend the cook by is his fries, does that mean the rest of his food stinks?”

“Try the fries and let me know if they aren’t the best ever,” she challenged with a smile. “The rest of his cooking is amazing too, but his fries…” It was true, they had lucked out when Howie hired Jason. He had worked at some swanky restaurant for years, where they didn’t cook steak and fries and call it steak and fries; it had some fancy name that the patrons in Howie’s Steak House didn’t care about. All they cared about was what was on their plates, and if it was good. “If you want to add a steak to your order, he’ll cook them to perfection. Just let me know how you like it?”

“You win, we could do with some food, and who could resist your sales talk?” He looked at his friend and the smile slipped off his face for a moment before he forcibly put it back in place. “Liam. You hungry?”

For the first time the party pooper’s eyes seemed to focus inside of the room, instead of being in some distant place far away from the laughter and noise. “Not really.”

“You need to eat anyway. Freddy?” he asked the other guy, who was watching Eloise flirting outrageously, an amused smile on his face.

Freddy turned his attention to Carla, but didn’t look at her in the same way as Eloise. No one ever did. Carla was OK with that. She didn’t need the drama that came with being the center of attention.

“Sure. Add some onion rings too, Joel.”

She wrote down their order: three steaks with fries, one medium-rare, the other medium-to-well-done, and onion rings. “Any more beers?” she asked, her eyes fixing on Liam, who looked at her blankly before turning away.