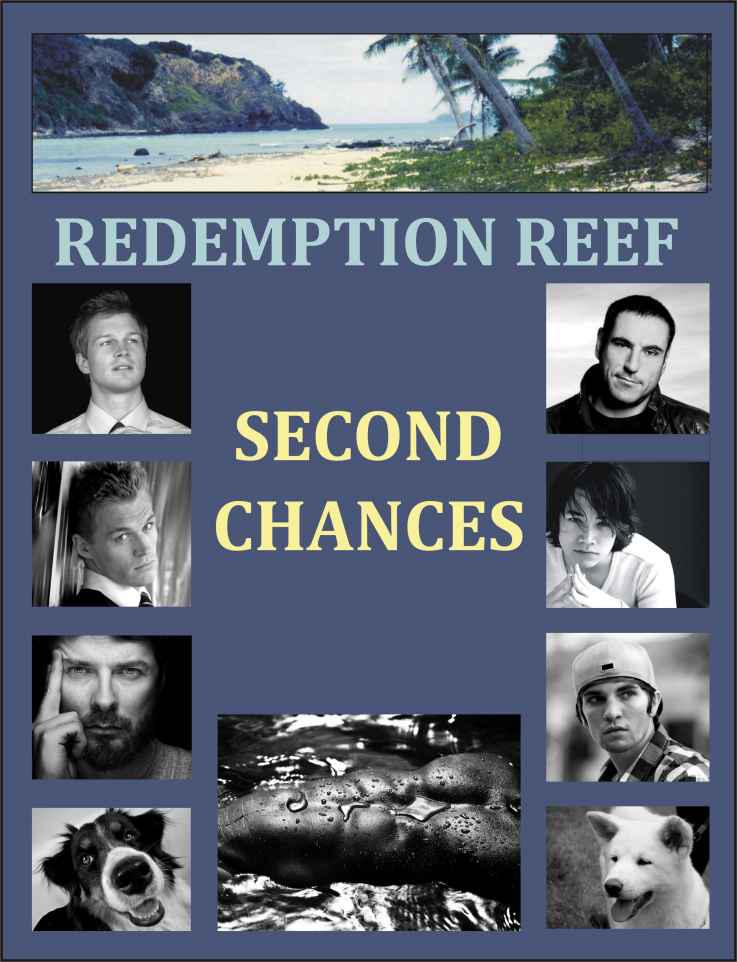 Main characters and their contributing authors
in order of appearance

1: An Offer They Can’t Refuse

2: A Word or Two Before Bedtime

11: So Where The Bloody Hell Are You?

12: Not What We Expected

20: Down the Rabbit Hole

1: An Offer They Can’t Refuse

Miles stretched out his legs and gloomily surveyed the other occupants of the room. Gil and Lyle had their heads together and were having a deep and meaningful by the looks of it. Pity he couldn’t hear what they were saying. Lyle looked like he’d been sucking lemons, so it probably wasn’t going well between them.

Glancing out the corner of his eye at the young man sitting beside him, Miles noticed that although Aiden seemed relaxed and was stroking the fur on his dog’s head, he kept checking the doorway, as if hoping to see Flynn walk in any minute. The dog seemed just as interested in something in the passageway, his mouth open and tongue lolling out.

Roofie lay sprawled at Miles’s feet, nose resting on his forepaws, his tail thumping on the floor every now and then. His silly mutt obviously wasn’t picking up on the tension in the room, more interested in Aiden’s Akita, Dante, than anything.

They’d all been told to meet at Lyle’s place at nine p.m. and been greeted at the door by the agent who’d been part of the clean up team after Vale died.
What the fuck was his name again? Breslaw, that’s right.
Miles gave a silent chuckle; no doubt Flynn would have been referring to him as Coleslaw if he’d been here.

Miles had been snowed under with work at the local clinic for the last few days and hadn’t heard much about Flynn’s condition except for the odd forlorn comment from Aiden that he still hadn’t regained consciousness. The strange thing was that when Miles finally managed to get time to give the hospital at Asher Bay a call, they said he wasn’t there. “Have you heard from Flynn, Aiden?”

Glancing up from the tiny spot on the floor he had been staring at, fingers still moving in Dante’s fur, Aiden nodded, making a small noise of agreement. “I saw him this morning… he was still unconscious,” he answered softly. “So I guess technically I haven’t heard from him.” He looked up briefly at Miles, then returned his gaze to the interesting spot on the floor.

Gil detected scarcely-held-in-check emotion in Aiden’s voice. “It could be a while yet. Head injuries are funny things; one person can take a while to wake up, another can be awake in minutes. It’s not really predictable, is it, Doc?”

Miles ignored the young paramedic’s question for the moment. The brain did weird things and seeing it was Flynn’s brain under discussion, the chances were even greater than usual, especially given the amount of shit and secrets the young man had locked away in there. But something Aiden said didn’t make sense. “You said you saw him, Aiden? When? Where?”

Aiden paused before replying. “At the hospital before school.” Why was it that big of a deal when he had seen Flynn? Of course he knew where he was; he’d been with him when he was transported to Asher Bay. “I’ve been to visit him every day since.”

Miles blinked at the news. “Strange, when I rang the hospital before I came here tonight, they said he’d been discharged, or at least was no longer there.”

Aiden sat up straight and looked at him, shaking his head. “No, that’s not possible. He couldn’t have been discharged that fast. He wasn’t even awake this morning.”

Gil frowned at Miles.
Why was the doc ignoring him now
? Fine, if that was how he wanted to play it, he could ignore him too. “Did they misunderstand, Aiden? Mistake the name, maybe?” He turned back to Lyle who was looking distinctly uncomfortable. “You okay?”

“Ask Marshall Breslaw, apparently he makes all my decisions now.” Lyle wished he’d not said that, but it escaped before he could think it down. Being told who to invite to his home and when, without being told why, had him pissed as hell. Lyle felt he’d practically been under house arrest since Flynn Archer had killed his former boss, the town’s mortician, Henry Vale.

Lyle’s original handler, Agent Tyler, had vanished into the woodwork the same night Vale died. It was her negligence, or her deliberate betrayal, that had placed him within Vale’s field of influence to start with; he still wasn’t sure which Tyler was guilty of. He was still missing her, though. Marshall Breslaw, who claimed to be Tyler’s superior, was not Lyle’s ideal flatmate; the big man was graceless as a guest and uncommunicative as a guardian. Breslaw had spoken on the phone to people Lyle had never heard of before more than he had spoken to him since he moved himself in.