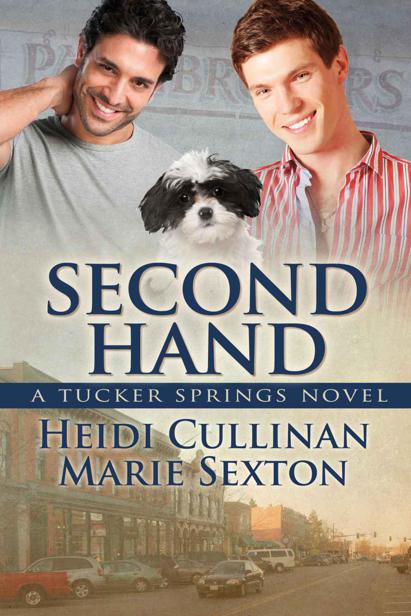 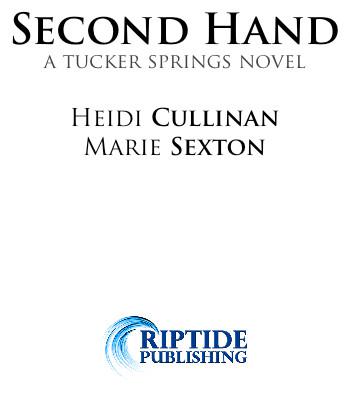 All rights reserved. No part of this book may be reproduced or transmitted in any form or by any means, electronic or mechanical, including photocopying, recording, or by any information storage and retrieval system without the written permission of the publisher, and where permitted by law. Reviewers may quote brief passages in a review. To request permission and all other inquiries, contact Riptide Publishing at the mailing address above, at Riptidepublishing.com, or at
[email protected]
.

For Marpy, because she deserves it.

Paul Hannon moved to Tucker Springs for his girlfriend, but she’s left him with a house he can’t afford and a pantry full of useless gadgets. All Paul wants is to get back to normal, even if he's not sure what that is anymore. When he wanders into Tucker Pawn for a gift to win her back, he meets El Rozal, pawn shop owner and all-around cynic.

El Rozal doesn’t do relationships, especially not with clueless straight boys still pining for their ex. El may make his living dealing in castoffs, but that doesn't apply to men. Still, when Paul starts clearing out his old life, pawning kitchen equipment he never wanted in the first place, El is drawn to Paul in spite of himself.

Paul and El have nothing in common except a past full of disappointments. There's no reason to believe the two of them could fit, but in El’s line of work, one man’s junk is another man’s treasure. When it comes to love, El and Paul may learn that secondhand doesn't mean second best.

Going into the pawnshop was a mistake. I knew it the same way I’d known two months before that Stacey was going to leave me, some nagging sense of unease deep in the pit of my stomach. On the day she’d left, I’d stopped on my way home and bought dinner because a little voice in the front of my brain chattering away like a chipmunk refused to believe that sense of impending doom. It insisted that chow mein and sweet and sour pork would make Stacey smile and everything would be all right.

Of course, the chipmunk had been stilled to silence by the empty house and the note on the bedroom door.

The chipmunk, however, never learned. Today my inner rodent had prattled on, reminding me Stacey’s birthday was in two days. I couldn’t not get her a present, it reasoned, not after all the time we’d had together. Worse, how could I pass up a chance to win her back?

Of course, I was looking to buy said present at a pawnshop. This was a new level of desperation, even for the chipmunk.

I opened the door of the pawnshop but stopped dead when I got a good look inside. The neon lights outside flashing “BUY - SELL - PAWN” should have tipped me off as to what kind of atmosphere I’d find, but I’d never actually been in a pawnshop before, and it was far worse than I’d anticipated. It was dirty and cluttered and sad. Discarded items—mostly TVs, stereos, and Blu-ray players—lay dead on the shelves. An entire wall held musical instruments, silent in the absence of their owners. The smell of cigarette smoke and something else lingered in the air, something I couldn’t identify. Something that reeked of failure. I was overwhelmed by the same sense of helplessness I felt at the animal shelter, all the animals behind bars, wondering why nobody loved them anymore.

I almost turned and walked back out, but the man sitting behind the counter was watching me, his booted feet on the glass display with a half-smoked cigarette drooping between his lips.

“Can I help you?” he asked, and I marveled at the way the cigarette stayed stuck in the side of his mouth.

I shoved my hands into my pants pockets. “I’m looking for jewelry.”

He took the butt out of his mouth and smiled at me as he stood. “You’ve come to the right place, my friend.”

I doubted that, but I chose not to contradict him. The “right place” would have been the jewelry store down the street, its windows full of gold and diamonds, but I sure as hell couldn’t afford that. One of the downtown art galleries had beautiful glass pendants, but the chipmunk had protested. They were colorful, but twisted glass wouldn’t win Stacey back.

The owner led me around the shop through a faint haze of cigarette smoke, past glass cases full of iPods and cameras, GPS navigators and laptops, to one along the back wall that held jewelry. The selection was crazily eclectic. Giant turquoise bracelets and dainty gold chains, wedding bands and strings of pearls.

“You looking for anything in particular?” he asked.

That was a good question. What should I buy? Not a ring. I’d already given her one of those. Never mind that it was currently sitting in a bowl on my bedside table. Not a bracelet. She didn’t like them because they got in her way when she worked.

“Don’t sound so sure of yourself.” He stuck what was left of the cigarette into the side of his mouth, squinting against the ribbon of smoke that rose past his eyes as he unlocked the cabinet and began to pull out the displays of necklaces. The smoke curled around the coarse twists of his hair.

“Are you allowed to smoke in here?” I asked.

He glanced up at me, almost smiling. His black hair was shaved short on the sides and in the back, but the top was longer, spiked straight up in a way that hinted more at laziness than style. He was one of those casually cool guys, I realized, who were naturally put-together and suave, who found everybody else slightly amusing. And slightly stupid. “My store.”

“Yeah, but aren’t there city ordinances or something?”

He took the butt out of his mouth and leaned both hands on the edge of the glass counter to look at me. He was taller than me. Thin, though. Not bulky at all, but he still managed to make me feel small. “Pretty sure I’m the only honest pawnbroker in town. As long as I’m not fencing, cops don’t exactly care about my personal vices.”

“I see.” I tried to hide my embarrassment by looking down at the necklaces.

“Is this for your mom or a girlfriend?”

“Girlfriend,” I said, deciding he didn’t need to know about the “ex” part of the equation.

“In that case, I’d say stay away from pearls and Black Hills gold.” He shrugged and rubbed his hand over the hair at the nape of his neck. “They’re sort of old school. Opals, too.”

“Show me a woman who doesn’t.” He knocked the cherry off his cigarette onto the concrete floor, rubbed it out with his foot, and tossed the butt in the trash can before pointing to a necklace in the center. It had a stone so dark blue it was almost black. “This is the only sapphire I have right now, but if you want my opinion, it sort of screams 1995. Now this,” he pointed to one near the end, “this one is new. Platinum’s all the rage, you know.”