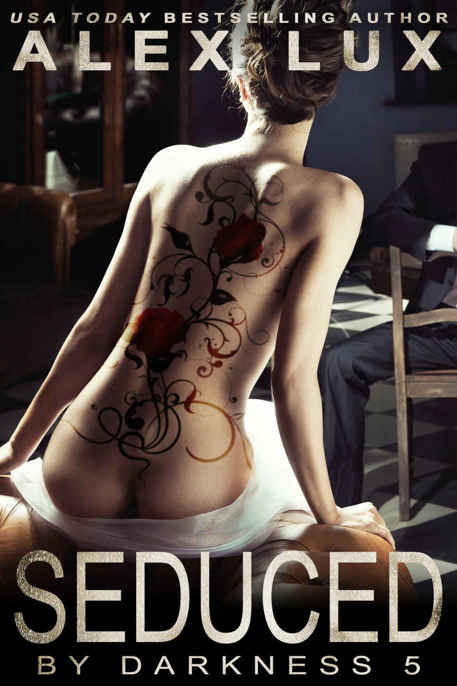 You may not use, reproduce or transmit in any manner, any part of this book without written permission, except in the case of brief quotations used in critical articles and reviews, or in accordance with federal Fair Use laws. All rights are reserved.

This eBook is licensed for your personal enjoyment only; it may not be resold or given away to other people. If you would like to share this book with another person, please purchase an additional copy for each recipient. If you're reading this book and did not purchase it, or it was not purchased for your use only, please return to your eBook retailer and purchase your own copy. Thank you for respecting the hard work of this author.

This is a work of fiction. Names, characters, places and incidents are products of the author's imagination, or the author has used them fictitiously.

To all the
Seduced
and
Forbidden

fans who encouraged us to keep this world going.

This one's for you.

Chapter 1 – Tis Within Ourselves - Rose

Chapter 2 – Have Not We Affections - Rose

Chapter 3 – Demand Me Nothing - Derek

Chapter 19 – She Chose Me - The Twilight Queen

Chapter 22 – Have Not Patience - Derek

Chapter 34 – Her Own Goodness - Drake

Tis within ourselves that we are thus or thus

THE PULSE OF
power called to me, pulling me into its web of temptations, but my eyes landed on my husband, close to death, fighting the infection from Ryder's claws. How could I leave him?

I fell to my knees, screaming, when another wave of pain shot through my arm as it attempted to shift back to human, attempted to heal the broken bone, only to be locked into the gruesome half-shift of broken bird wing and arm.

Ryder had faced three of us—me, Derek and Bishop Alaric—in an ancient Trial by Strength, and he had won. He had his life. His freedom. Even while Drake fought for his life back home.

I didn't see him as I struggled with my decision to leave or stay, tears streaming down my face, knees bruised from the stone floor.

A hand rested on my shoulder and I looked up at the White Wolf. "Go, child. We will care for him. Go."

He'd said I alone could find the ancient Druid. And he alone could help me survive my powers.

And so I pulled the robe the Lycans had given me to protect my naked flesh around me, and walked through the door that led to the white forest of snow.

Barefoot, in too much pain to feel the cold, I followed the thrum of magic moving in me and around me.

I lost all sense of place and time and found myself before a cave, with icicles covering it like a magic castle, finding warmth in the golden glow that emanated from the space.

The man hunched by the fire looked up, his body a patchwork of different animals. Fur for skin, antlers protruding from his head and wings sprouting from his back. He raised a hand at me—a bear claw, actually—and smiled. "Come," he said. "I've been waiting for you."

I took his gesture as an invitation and shuffled closer to the fire, the heat now searing my skin, burning away the cold that had seeped into my bones. "Who are you?"

He offered nothing more and I stared into the fire, fighting my pain and desperation. "Why am I here? The White Wolf told me to come, but why?"

"You have a rare magic in you. It could destroy you. Or it could make you great. I am the last remaining Druid who understands this power and knows how to control it." He looked up at me, fire dancing in his dark eyes. "I can teach you."

I slipped my broken arm out of the cloak. "Can you fix this?"

"Derek said it's forbidden to shift into forms other than wolf. He said it's dangerous."

Talon's lips twitched. "It is."

"Why should I trust you?" My body shivered again, pain making me dizzy.

"Because you have no other choice, unless you want to spend the rest of your life feeling the way you do right now."

My chin fell to my chest and I choked back a sob, pulling myself together enough to look up with tear-stained eyes. "I'm in. What do I need to do?"

I expected my training to be one of those action packed sequences you see in movies, with intense physical challenges mixed with obstacle courses, a soundtrack creating the emotional tension—but no. I got a lot of meditating.

This wasn't as exciting as I'd hoped, but was about all I could handle, given how much pain radiated through my arm. I could barely walk straight, so I guessed I was lucky that this was all I had to do.

And as it turned out, sitting still for hours on end required a lot of endurance, and wasn't easy with my arm screaming at me.

For many hours nothing happened. I felt cold, tired, in pain, impatient and miserable. I wanted to go see Derek, to make sure he was okay, but I knew if I left I'd lose my chance to ever master my shifting abilities. I'd hurt myself and my husband in the process.

So I stayed. As my knees cramped in the lotus position. As my lips dried. As my ears froze and my nose turned red and runny. As a bug crawled over my bare foot. As the fire dimmed and died and the last breath of warmth fled our little cave. I stayed.

I'd nearly passed out from the pain and exhaustion when something changed. My mind dug deeper than it ever had before. I found a hidden corner of my consciousness that I hadn't known existed. Like a secret door that I'd lost the key to.

Everything became so vivid and real I was half sure I was hallucinating, but I didn't fight it. I knew I needed to follow it through to the end to see what lay beyond the door, what mysteries I might discover of myself if I didn't give up.

And so the door became more real. The color of blood, a deep red with grooves in the wood and a shiny silver door knob. I pushed it open, the silver cool on my hand, the grains of wood deeply textured with glossy coats of paint smoothing the roughness.

Inside the room a low hum rose in the darkness, and from some unknown source of light the room became visible all at once, blinding me.

I squinted, letting my eyes adjust to the brightness as I took in the sight before me.

But they weren't wandering about randomly; they were each centered under a colored beam of light, the source once again unknown. They had vacant expressionless eyes, like statues, but they moved in small ways, breathing, shifting, scratching.

I recognized the bear first. The bear from my dreams that I had shifted into during my fight with Ryder.

Next to her hovered the hawk I'd shifted into during my recent fight. Something seemed off about her though, so I stepped closer and shuddered at what I saw.

Instead of a wing she had a human arm. My arm.

I looked down at my own wing/arm and cringed, then glanced at the other animals. My wolf, her golden coat soft and shiny, and other animals I'd never seen before but recognized at a soul level. A deer, innocent and sweet. A black panther, deadly and sleek, its dark fur reflecting a glowing purple light. A rabbit, sniffing at its own pawns, its ears twitching.

And so many more.

I walked closer to the hawk and placed my good hand on its wing. Darkness gripped me and I fell into an abyss, screaming without sound, crying without tears, my body no longer corporeal in this eternal nothing.

Talon's voice called out to me through the darkness. "She is your way back. The hawk is you and you are her. You must reconnect with her spirit and give back to her what you took so that she can do the same."

"How?" I think I screamed, but I couldn't hear my own voice, not even in my mind.

"By finding her in you."

My heart pounded, fear gripping me, my stomach no longer real but still dropping into my gut as I felt sure I'd fall forever.

I tried to find my breath, find my happy place, but it no longer existed.

So I looked for my hawk, tried to feel her in the frantic panic of always almost dying.

And there she was. A faint flap of wings out of the corner of my eye. A soft sound almost forgotten, but there if I listened closely. I put the full force of my concentration into that sound, that memory of something, and honed in, grabbing more of her. The woody scent of her feathers, the powerful muscles in her wings, the sharpness of her beak and talons. With each detail, I became more real too, my body forming and shifting until I was her and she was me.

We were one, flying out of the abyss and into the warm light of the room I'd been transported out of.

When I reached the room, I released her, and she flew with both wings back to her waiting spot.

I looked down at my two good arms and snapped back into my frozen body by the dead fire, breathing heavily, nearly unconscious, but whole at last.

Scorpia by Anthony Horowitz
Darkness on the Edge of Town by Brian Keene
Untitled by Unknown Author
Sheikh's Scandalous Mistress by Jessica Brooke, Ella Brooke
Long for Me by Shiloh Walker
Runaway Mortal by Komal Kant
Breathe Into Me by Nikki Drost
God Has Spoken by Theresa A. Campbell
Michael by Aaron Patterson
Conversations with Stalin by Milovan Djilas