Read Seduced by the Beast Online

Seduced by the Beast 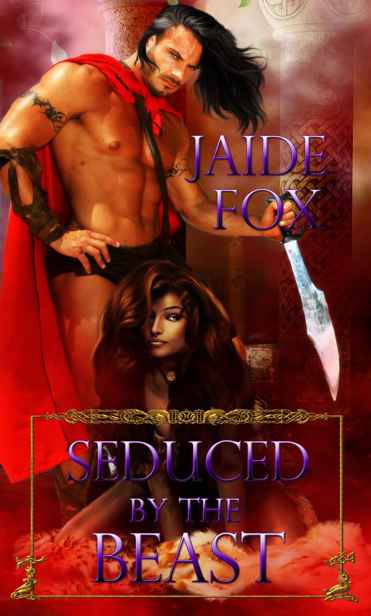 SEDUCED BY THE BEAST

This
is a work of fiction. All characters, events, and places are of the author
’
s imagination and not to be confused with fact. Any
resemblance to living persons or events is merely coincidence.

Other titles by Jaide Fox:

Beastmen of Shadowmere Book One: Marked by the Beast

Beastmen of Shadowmere Book Two: Seduced by the Beast

Swan of Avonleigh
had no knowledge of where she was and no memory of how she had gotten here.
There could be only one explanation--dark magic.

She nursed little
doubt that the source of the dark magic, and the instrument of her torture by
terror now, was the same—Morvere, the sorcerer who had cursed her to live by
day as a swan, only resuming her human form at night, the sorcerer who had had
clipped her wing so that she could not even fly away to protect herself when
the spell overtook her and changed her into a swan.

Not content with
the misery he had already inflicted upon her, he had dropped her into this
nightmare world, prey to the baying pack that now pursued her, where a horrible
fate awaited her the moment she faltered.

Terror surged
through Swan’s veins, near deafening her to the sounds of the pack that
surrounded her, almost seeming to toy with her as they herded her onward,
closing in now and then to drive her in a new direction.  Pushed almost beyond
endurance, her muscles screamed in agony, but the threat of being eaten alive
left no room for anything but the instinct to survive, to continue placing one
foot in front of the other.

Keening howls
tore through the night, wolfen, yet strange.  They surrounded her from every
direction, closing in now for the kill.  Ignoring the sharp nettles of
underbrush slashing her arms and legs as she forced her way through them,
tearing her naked flesh, Swan forged onward in desperation.  Blood shivered in
thin rivulets down her skin, scenting the air and driving the howls wilder,
louder ... the chase faster.

They were toying
with her, she knew with certainty now, yet she could not give up hope that she
would somehow elude them.

Something crashed
through the brush a short distance behind her but she dared not look--could
only forge ahead and pray she could evade the monsters in pursuit.

Her heart choking
her with its thunderous beating, the air burning her ragged lungs, she darted
around a tree, ducking under its slapping branches as she passed.  The hair
rose on the back of her neck as she sensed something close, something bearing
down on her.  She whirled around, looking frantically for an avenue of escape,
but everything was black in the night shaded forest.  Movement caught the
corner of her eye--death close at hand.  She twisted away from it in vain hope.

The scream she’d
held back for so long tore from her throat as a dark shape lunged for her.
Jerking away from its grasp, she lost her footing.

Leaves and dirt
churned as she crashed to the ground.  She screamed again as hands grasped her
arms and a heavy body rolled with her until she lay beneath it, her arms
trapped behind her back against the cool earth.  Bracing her feet against the
ground, Swan heaved upward, desperate to escape the ravaging blows she expected
momentarily.

A leaden weight
settled over her, tight against her thighs.  Hands pinned her shoulders to the
ground.  She was trapped.  Thoroughly bested, unable to move the slightest inch,
exhaustion forced her to collapse and cease her struggles. Breathing harshly in
the overwhelming silence, Swan braced herself mentally, expecting to feel
curved talons rake into her flesh, slicing down into her heart.

No attack came.
No bestial growl broke the stillness.  Quiet had descended around her.  The
howls had receded into nothingness, and the forest was still save for her own
pounding heart and ragged breath.  When no death strike fell, her sanity
returned, and she realized a man lay atop her instead of a beast as she’d
feared.  The touch of him scorched her own feverish skin, the sheen of
perspiration doing little to cool her unnatural heat.

Blinded by the
darkness, she could see nothing of him, his shadow eclipsing what meager light
made its way beneath the thick foliage of the forest.  Hard muscles clamped
tight against her hips, their grip strong and unforgiving, but still human.  He
seemed as human as she, someone she could face and hope to win against ... if
she could just gather her strength.  A deadly calm settled over her.

“Why come you to
these lands?” a deep voice rumbled above her.

Startled, Swan
looked up at him, too surprised to do anything but blurt out the truth.  “I
know not where I am, nor how I came to be here.”

He was quiet a
long minute, weighing her words.  “I think you do not speak the truth, but I
will humor you for the moment.  You lie in a forest of Shadowmere, on the
Northern Borderlands.  You have ventured far from your home, little bird.
Now--who opened your cage?”

Gooseflesh rose
on her skin, chilling her despite the hint of amusement she detected in his
tone.  Morvere had more power than she’d ever dreamed.  If such was truth—and
she held onto little doubt that it was not—then she could not hope to defeat
the sorcerer on her own.  It would take someone of equal power, someone versed
in magic ... someone from Shadowmere.

An insane
possibility, spurred by the sheer hopelessness of her situation, occurred to
her.  She ignored his question, voicing one of her own.  “Are you going to kill
me?”

“It is not often
we attract spies of your ... ilk.  I would not have you die so soon.”  He
leaned toward her and sniffed her throat as if he would taste her.

Swan held
perfectly still, unwilling to give him cause to attack.  The plan she’d only
begun to formulate fled.  No man behaved this way, this animalistic.  She’d
jumped to the wrong conclusion--a mistake that could easily make her life
forfeit.  He was not her kind.  It had been foolish to think so--to believe for
a moment that she had been rescued.

Inches away from
her ear, his breath hot and invasive, he whispered, “My question remains
unanswered.  I may be tempted to ... eat you, little bird ... if you do not
satisfy me.”

Swan swallowed
hard, ignoring the unfamiliar trembling that flickered through her.  “I don’t
understand it.  What spy of any worth would get caught?”

“One who had
allowed it?  Do you aim to disarm us with your charms?”

It was an
intriguing question, provoking a spark of renewed hope.  He would not have
mentioned it, surely, if the possibility had not existed. “I’m no spy.  You are
mistaken.”

“Rarely.”  He
seemed to study her, if his silence was any indication.  “We have ways of
making men talk.  I can think of much more pleasurable methods to ply on a
woman.”

She would die
before she allowed an unnatural to touch her, let alone use torture to gain
information from her, even if she’d had information to withhold from him, which
she most certainly did not.  With an effort, she hardened her will.  “You
cannot gain information I do not have, nor wield any force that could pry it
from me if what you suppose were true.  You don’t frighten me,” she said with a
bravado born of ruler ship.

“You should be.”
He chuckled darkly, pushing himself up so that he no longer lay fully against
her, though he still held her pinned to the cold ground.  His knowing laugh
crept over her with the intimacy of a caress.  She couldn’t escape the feeling
that he could see every inch of her body, despite the darkness, that he invaded
even her thoughts and knew her as no one ever had.

A callused thumb
brushed the edges of her collarbone.  Her skin tingled with heightened
awareness, near burning at the points of contact.  She shivered.  Never before
had she considered her nudity a danger.  In her world, no man would dare touch
her.  And though the dark shielded her, here ... there could be no guarantees
of safety in old illusions.  Swan jerked away from his invasive touch.  His
gall was unbelievable.

“I did not give
you permission to touch me.”

Despite her
command, despite her certain knowledge that in her own world he would not have
dared so much, would have instantly begged pardon for a presumption that could
easily have been a death warrant, she knew very well that she was powerless in
his world.

He was an
unnatural, of that she was certain, yet what powers did he possess?  She could
not know, nor even their extent, but even if he did not possess night vision,
he would certainly have felt her nakedness, pressed against her as he was.
Would he dare to press his advantage, to take what had not been offered?

Meager as the
tattered robe had been that had covered her nakedness, even that had been lost
in her mad dash for freedom ... snatched away by a tree’s groping fingers.
Nothing protected her now but her own tangled locks and the dusting of dirt
clinging to her skin.

She should have
felt frightened, or revolted.  Instead, her sudden awareness of him as a far
different sort of predator sent a strange kindt of expectancy humming through
her blood.

“I did not ask
it.”  He’d noticed her reaction, his senses uncanny.  “Most women would welcome
finding themselves in your position.”