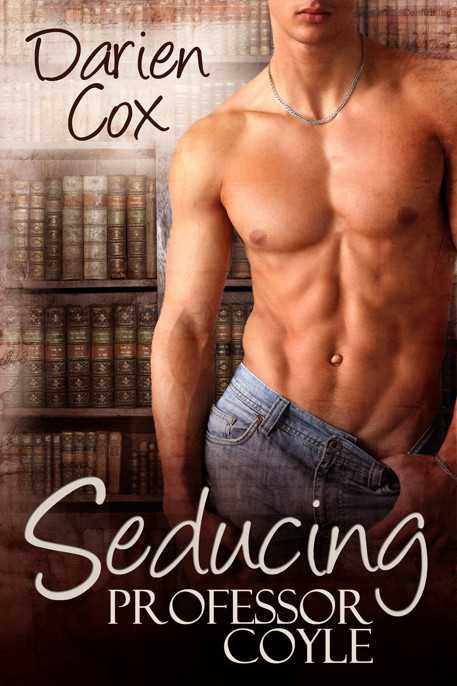 The teacher’s deep, melodious voice carried thespian style through the lecture hall as he droned on about D.H. Lawrence. Ben watched him pace back and forth. Dr. Coyle never made eye contact with the students. He kept his gaze mainly on the floor as he lectured, gesturing emphatically with his hands like a symphony conductor. Coyle was attractive, Ben supposed, with his dark hair curling above his collar, nice bone structure, deep-set eyes. He was tall but didn’t appear too lean. With the loose, layered clothing, his body wasn’t easy to scrutinize, but the suit jacket hung nicely on his broad shoulders. Sexy for an older guy, if not a bit detached and robotic. But while Ben may have entertained a fantasy or two about melting the charismatic teacher’s frosty demeanor, today he burned not with lust, but with bottled anger.

Ben looked down at the paper he held on his lap, wrinkled and worn from crumpling it spitefully into a ball, then smoothing it out again. All A’s except for one class:
Interpreting Literature
, with Dr. Peter Coyle. Midterm grade:
Incomplete
.

He glared down over the rows of seats at the professor, though with the vastness of the hall and glut of students, his dirty look was in vain.
Incomplete?
How the hell had that happened? He’d attended every class, boring as they were, and turned in all his homework assignments. Granted, he hadn’t much interest in classic literature, but was fully aware that he needed these credits to graduate this spring. He may not have given it the scrupulous attention he gave his other classes, but he certainly hadn’t slacked off, maintaining a respectable average on his tests and papers.

Dr. Coyle faced the class, fist beating his chest as he opined about poetry and heartbreak, eyes gazing up at the ceiling as though the ghosts of literary giants floated there. Ben wondered if the guy would even notice if the hall were empty of students, or if he’d simply carry out his lecture, lost in the bubble of isolation that seemed to surround him. Ben sneered at the ‘professor chic’ ensemble he wore: intellectual from the waist up, earthy and casual from the waist down—the classic tweed blazer with jeans and loafers. Even his eyeglasses seemed decidedly trendy; those nouveau nerdy black frames that were supposed to look like you didn’t give a crap about style, but in fact indicated just the opposite.

Sudden movement surprised Ben as the class came to a close and students gathered their things. He quickly grabbed his pack and struggled against the departing crowd, heading down to the front. He’d tried to find the professor before class started, but had no luck. He had to speak with him
now
, and find out what the hell had happened with his grade. Ben had busted his ass to get through four years of school, and he wasn’t about to be thwarted so close to earning his degree simply because some highbrow lit professor had gotten his wires crossed.

Swimming against the tide, he bumped shoulders and maneuvered his way around the departing students, but once he reached the podium at the front of the class, Coyle was gone. “Shit,” he muttered, and darted through the back exit to try and catch him. Turning down a long hallway, his shoes echoed on the marble floor as he moved toward the academic offices, finally stopping outside of Dr. Coyle’s. The closed door sported a poster of a weeping cartoon egg beneath the words ‘Humpty Dumpty was pushed’. Ben rolled his eyes, and knocked.

Sighing relief, Ben pushed open the door. Peter Coyle sat at his desk, glasses resting halfway down his nose as he perused a folder. Looking up, he raised his eyebrows, doing a quick scan of Ben before meeting his gaze. “What can I do for you?”

Ben moved into the room and took the seat across the desk, sliding the printout of his grades to the professor. “I’m Benjamin LeClair. I was hoping you could help me figure this out, you gave me an incomplete for my midterm grade, and I’m not sure why.”

Scowling down at the printout, Coyle ran a finger over it. His lips pursed and Ben studied the man’s face. He’d never been this close to him, and was taken aback. The professor was
far
better looking up close, with long lashes over amazing navy blue eyes, prominent nose and cheekbones. A strong neck and hint of lean muscle beneath his button down shirt suggested he worked out. Ben tried to guess his age. Thirty-eight? Laugh lines framed his eyes, and Ben wondered how he’d gotten them if he was always so stoic and sour. His dark hair had only a few rogue grays, thick and lustrous.

Coyle moved to a computer on his desk and frowned at the screen as he tapped the keys. Ben waited awkwardly, a slight heat burning his face. He felt like he’d done something wrong, a criminal under a hot light. But he hadn’t, he reminded himself. He was in the right here. Taking a deep breath, he lifted his chin, trying to appear confident.

Finally Dr. Coyle’s eyes met his. “You missed a test.”

Coyle sighed and removed his glasses. He turned the screen toward Ben. “February tenth, a test on chapters four through ten. My records show you never turned it in. I had no choice but to give you an incomplete.”

Ben frowned at the screen, shaking his head. “It’s a mistake. I remember that test, I took it. I swear I haven’t missed a single class. Can you check attendance or something?”

Dr. Coyle smiled, and while it was a nice smile, crinkling the corners of his blue eyes, there was no benevolence in it. “I don’t take attendance. This is college, if you want to be in class, that’s your choice, it’s your money wasted if you don’t show up.”

The professor’s voice held a tone of condescension, and Ben’s teeth clenched. “I’m aware of that, I’m a college
student
, not a child. But I just told you, I haven’t missed a class, and I turned in the test. I need this grade to graduate. There must be something we can do.”

Coyle stretched back in his seat and rubbed his eyes, groaning, as though Ben had shown up merely to ruin his day. Sighing, he dropped his arms on the desk and studied Ben. “What’s your major?”

Nodding, Coyle said, “I suppose you don’t have much use for my class, aside from needing the grade.” His gaze drifted over Ben, seeming to size him up and find him wanting. “Nevertheless, I can’t help you if I don’t have your test.”

“But you did have my test, because I took it. How will this affect my grade?”

The teacher shrugged. “Well, it wasn’t simply a quiz you missed. That exam covered most of what we went over first term. Your final grade will depend on how well you’ve done on all your other assignments, but unless you’ve maintained an exceptionally high average, this will set you back considerably. You might fail the class.”

Ben’s anger flared, fingers biting into his thighs. He could imagine how he appeared to the professor. Ben was twenty-three, older than most of his colleagues, but he likely looked like just another kid to Coyle: young, good-looking, an athlete’s body. Ben’s pretty face, neatly trimmed hair and immaculate wardrobe often gave others the impression he had money.
“You look like good breeding,”
his roommate Dominick teased sometimes. But Ben’s mother’s beauty was the only inheritance he’d gotten. Everything he had, he’d earned, and coming from less than nothing, he’d had to work twice as hard to get it.

“Well there
must
be something we can do,” Ben protested. “You have to change my grade, I took the test. I can’t prove it, but I know I took it.”

“Mr. LeClair,” Coyle said, linking his fingers in front of him, “you keep saying there must be something
we
can do. But last I checked, it was
my
class.”

Ben’s temper roiled through him. He leaned forward, clenching his fists to keep from smacking the arrogant smirk off Coyle’s face. “Funny, I could have sworn it was
my
class too. I am paying for it, as you pointed out. But aside from the money, which comes from my own pocket, hard earned, don’t you think it’s a bit counterproductive to the learning process, to the
teaching
process, to not give a crap about your students?”

Professor Coyle’s eyebrows rose, a hint of surprise. He leaned back in his chair, blue eyes focused on Ben. “I don’t respond well to hostility, Benjamin.”

“I’m not hostile, just frustrated.
You
lost my test, and now
I’m
going to have to pay for it. And you have no idea how hard I’ve worked to get this degree.”

“I assure you, I do not
lose
tests. I have a very organized system. If I’d received your test I’d have recorded your grade. I don’t know what more I can do for you.”

“Then let me take a makeup test.”

Coyle shook his head. “There is a structure in place for attending class and taking exams, and I expect students to adhere to it. I can’t give special treatment and hand hold, it’s your responsibility to turn in the work.”