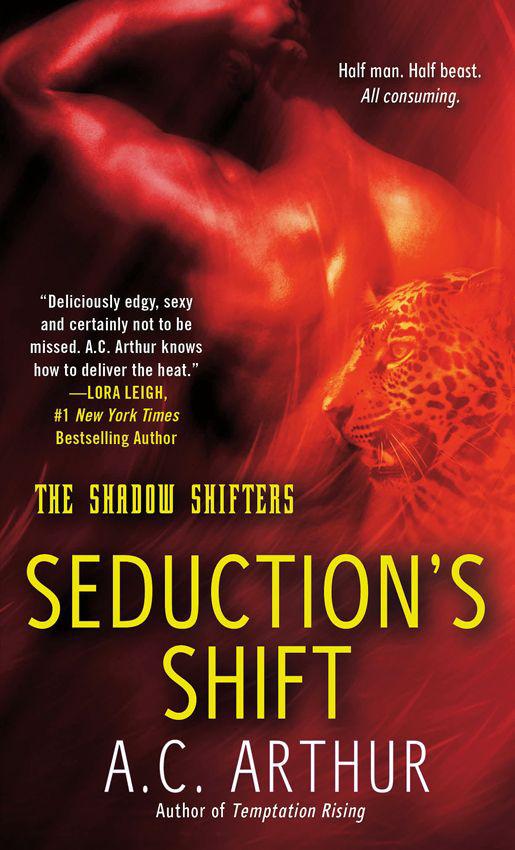 Curandero—
The medicinal and spiritual healer of the tribes

Elders—
Senior members of the tribes

Joining—
The union of mated shifters

Rogue—
A Shadow Shifter who has turned from the tribes, refusing to follow the
Ètica,
in an effort to become their own distinct species

Rage was like a nightcap to Sabar, violence the prelude to a blissful dream. This feeling he was now experiencing, this loss of control and defeat, was unfamiliar and not at all pleasing. His dick hurt it was so hard. His incisors elongated painfully, pricking into his lip and drawing blood. To say he was angry was a bold understatement.

The East Coast Faction Leader was still alive, and so was his bitch of a mate. They’d both escaped the fate he’d planned for them. As for Rome Reynolds, he still wanted the shifter dead—and his mate … well, since she’d chosen so unwisely she might as well die, too. Sabar wanted all those fake leaders dead so the shifters would have no choice but to look to him for guidance—stupid animals that they were.

And dammit, it was hot like an inferno in this place. The air was thick and stifling, the sounds of nightlife in the Gungi rain forest raking against every one of his human nerves. Sabar wanted to be out of this godforsaken place as soon as he possibly could. He wanted to get back to his business in the States. But there was business here in the forest, too. Old business that he’d never forgotten.

He was a busy shifter with plans the shadows would never imagine he could dream. He was resourceful and tenacious, determined to have what he most desired, by any means necessary. That’s what tonight was about, showing the shadows who was in control. Always the most powerful, controlling everything no matter where it was.

Stepping into the small hut with its trampled-mud floors and damp stale aroma, he looked every bit the ruler he claimed to be. On his feet were shit-kicking steel-toed boots. Black jeans clad his muscled legs, while a black T-shirt covered his tattooed chest and Ray-Bans cloaked his eyes. His hair, which grew faster than the average human’s, was now thick tresses, pulled back by a black band. He came to a stop and looked directly to the corner where she was tied and gagged.

His mouth watered, heart rate picking up instantly at the sight of her. She was not only powerful but damn pretty as well. She wore the thin suede dress that was the usual attire for female shadows living in the forest. Her sun-kissed skin glowed in the firelit corner of the hut. On her feet were leather boots, rising just past her ankles. These weren’t a normal fashion must-have for female shifters, but this wasn’t just any female shifter. Long strands of dark hair hung past her shoulders. Her ankles and wrists were bound, a gag stuffed into her mouth. Whether she heard or scented his approach, Sabar didn’t know, but she turned, looking up at him with glittering amber-colored eyes.

The outrage rolling off her in thick rivulets poured into Sabar, rubbing against his already dark nature, coaxing his insides into a state of perpetual arousal.

“Beautiful
curandero,
” he said in a voice thick with lust, his dick aching with the same. “You are finally mine.”

She made an attempt to get up, to charge at him, he supposed, but her bindings held her in the corner. His blood pumped quickly at the display of violence in her, the strength he scented pulsing through her veins. She was a strong one, this designated
curandero
as the tribes referred to her, a healer to their kind. Wise for her young age and courageous in her endeavors. He wanted her, to touch, to taste, to feast upon, and to show the shifters his ultimate power over them.

Not that she was his mate. No, those thoughts had died the night Roman came in and took Kalina away from him. He’d decided that Kalina would be his mate. Unlike the shadows, who believed the
Ètica
preordained who their mate would be, Sabar made his own decisions. He’d watched Kalina fight his men and choose the shadow over him. She had defiled herself by sleeping with another, by committing herself to the shadow and his kind. For that, the bitch would die with the rest of them. Sabar refused to think any other way about the situation.

But this one, this spirited little shifter, could be his, too. She could join the other playthings he’d acquired to do his bidding, to quench his every desire. Oh, yes, he thought, feeling the length of his arousal pressing painfully against his jeans, she could provide so much pleasure as well as the medicinal knowledge he required.

“Aren’t you a tempting little morsel,” he said, bending down so he could get a closer look at her. “And powerful, I hear.”

Reaching out a hand, he pushed back thick patches of matted dark hair. She didn’t move a muscle, and he smelled not fear but rage emanating from her delectable body. Her cheek was bruised and swollen, her legs pulled up close to her chest with her arms wrapped around them. Her body trembled with anger and the need to lash out at him or anyone who came near. When her eyes glared at him, sending a rush of heat through his body, Sabar wanted nothing at that moment but to hear her voice, so he pulled out the ugly rag that had been stuffed into her mouth.

“Say something!” he yelled.

But there was silence. She didn’t speak, only licked her dry lips and kept glaring at him.

“We can do this the hard way or the easy way. I’m not one for giving a lot of choices, so you’d better take advantage while you can.”

“Go to hell,” she said in a raspy tone and squared her shoulders.

So she had spunk. Well, he liked when they fought him. It made the taking much more exhilarating.

“Stand her up,” he said to the two shifters standing guard at the door. They were rogue jaguars with heavy builds who spoke few, if any, words but took orders like they’d sworn allegiance to only him. Just the kind of shifters Sabar liked to employ.

They came to the female, lifting her without any kindness until she stood, her back against the wall. She let her head fall forward so that her long hair draped her face. Sabar stepped closer, grasped her chin roughly, and pushed her head back. Eyes a strange reddish brown combination stared back at him hauntingly. Pert lips were drawn into a tight line. Her hair gave her a wild untamed look, but he knew that was a lie. She was tame, and she was one of the most intelligent shifters in this forest. That’s why he wanted her. She would serve his purpose well.

“Clean her up and get her ready to travel,” he said, still staring into her hypnotic eyes.

His gaze was still held by hers when those pert lips moved and she spat in his face. A muscle ticked in his jaw, and for a few seconds he saw nothing but rage. With the back of his hand, he wiped the moisture from his cheek. Then he stepped closer to her, taking her bound hands and moving them to the hard bulge of his arousal. She balled up her fists to resist but he uncurled her fingers, pushing them until they almost broke and she gasped in pain. Sabar rubbed her opened hands over his length, loving the warmth spreading through him at her touch.

“You’ll learn quickly to be nicer to me.” Leaning forward, he licked the cheek that wasn’t bruised and moved back to whisper into her ear. “That’s the only way you’ll stay alive. I’ve slit throats of shifters and drunk their blood for breakfast. Don’t think I won’t do the same with you.”

She tried to pull her hands away, but Sabar simply laughed. Taking a step back, he pushed her until her back slammed against the wall. He didn’t want her like this, all dirty and acting like a mute. When he fucked her, which he decided he would definitely do once she was cleaned up, he wanted her completely coherent and participating—whether by force or by choice, he didn’t actually care.

“Nobody touches her again. I don’t want any more marks on her,” he ordered, then turned away. “And get her out of this filthy-ass place. Then burn it to the ground. It stinks like rotten shadows in here.”

The shifters nodded, one reaching for her while the other moved alongside Sabar. “I want to be out of here in a couple of days. Get her to the lab, now!”

“Yes sir.” The other shifter nodded.

Sabar stepped out into the night air, inhaling deeply. He’d been born here, in the Gungi rain forest, and here the lowly shifter that had been abused and disregarded had died. He hated everything about this place now, from the thick cover of trees just a few feet away to the range of different animal sounds that tickled his ears. He didn’t like the smell, the rain, the forest, the animals and evidence of their living off the land. He hated it all and wanted to get back to the civility of the States as soon as he possibly could. He had what he’d come here for—the
curandero
whose talent for mixing medicines would help grow his drug empire to proportions that would make him the richest shifter in all the world.

It was dark, but at least it was clean. The last hut reeked of filth, body odor, and other, less appealing things. When they’d stuffed that gag into her mouth Ary wanted to vomit, and when she’d seen him she’d wanted to kill.

Sabar Tavares, adopted son of Elder Julio and Maria Sabien Tavares, kidnapped when he was ten by Boden, a sadistic shifter who used his strength to rape and kill humans in nearby villages. As a result, the Topètenia shifter—who should have walked in his parents’ footsteps, striving to maintain peace and equality among their kind—was instead a poster child for what the humans called Stockholm syndrome, repeating his abductor’s crimes over and over.

And this time she was his target.

The Wummin: The Glasgow Chronicles 5 by Todd, Ian
It's Nothing Personal by Gorman MD, Sherry
Ameera, Unveiled by Kathleen Varn
A Very Wolfie Christmas by Acelette Press
4 The Ghost of Christmas by K.J. Emrick
Anderson, Kevin J - Gamearth 01 by Gamearth
Chain of Illusions (Bringer and the Bane) by Brux, Boone
Firehorse (9781442403352) by Wilson, Diane Lee
Games of Zeus 02- Silent Echoes by Aimee Laine
Istanbul Passage by Joseph Kanon