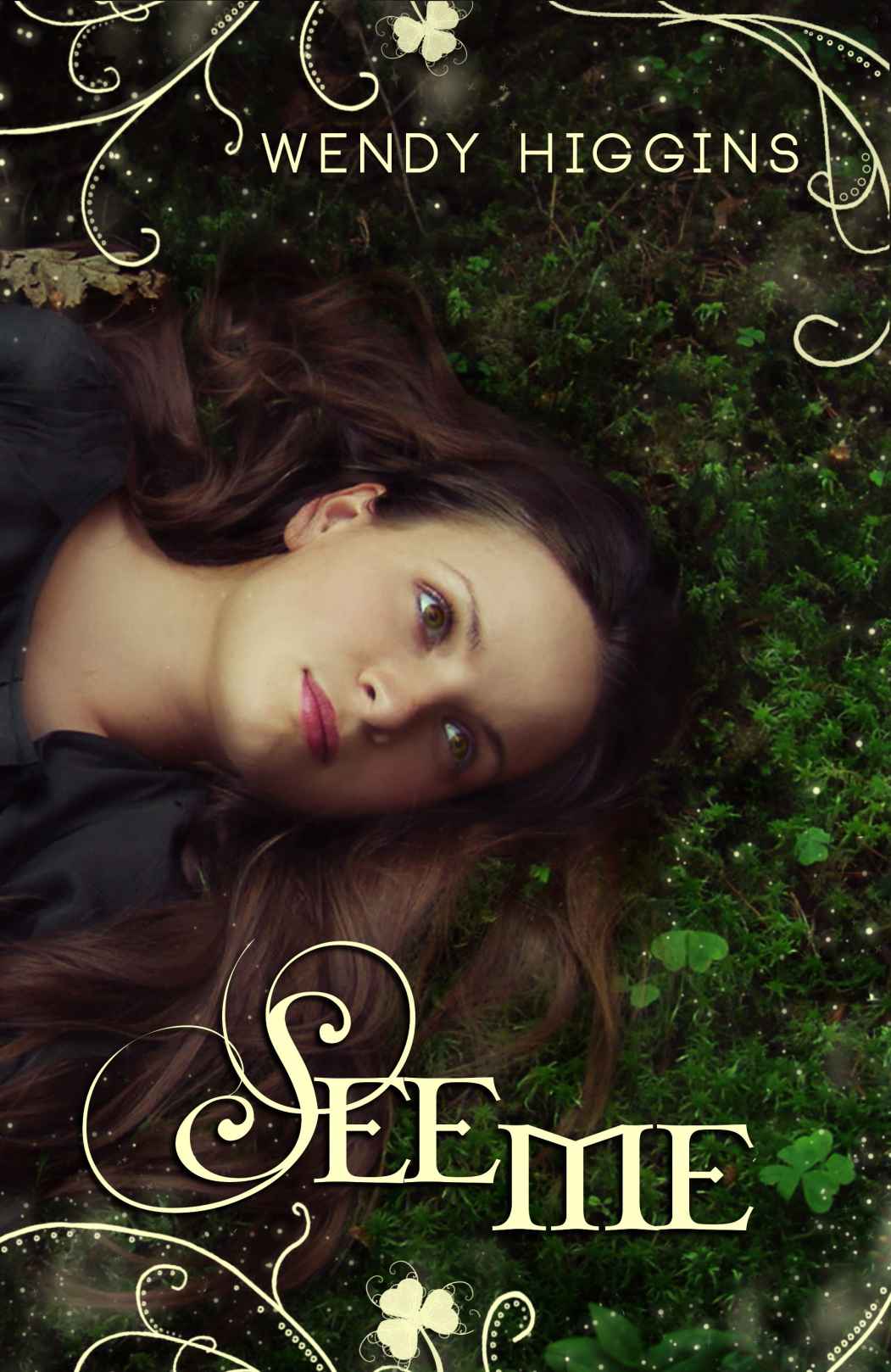 No part of this book may be used or reproduced in any form or by any means electronic or mechanical, including photocopying, recording, or by any information storage and retrieval systems, without prior written permission of the author except where permitted by law.

Image license from Dreamstime.com with the following names: © Aliftin

Note to reader: Please do not, under any circumstances, change the file format of this book and post it online. That is piracy (stealing) and it breaks my heart. Thank you for your consideration.

To the Hornback Zoo ~

May the winds be always at your back

CECELIA MASON HAD NEVER
been more frightened. Their infant, Robyn, was fast asleep in the carrier against her chest. Leon squeezed Cecelia’s hand as they entered the Fae realm through a lower portal in the Irish countryside. They hadn’t wanted to bring Robyn into the land of Faerie, but they couldn’t leave her in the U.S.

Cecelia closed her jacket over the bulge of fabric. A lifetime of service to the unpredictable Fae had taught them not to show emotion or draw attention to themselves. They wore their plainest clothes. Cecelia went without make-up and had pulled her brown waves into a low bun. The couple, human except for the magic imbedded in their blood, cringed as they pushed through the thick barrier of atmosphere between realms.

A portal guard recognized the
Dightheach
signatures of the human “helpers” and led them through the vine-covered labyrinth to a clearing. Soft light poured overhead from a sky of pastel swirls and music played like chimes. Cecelia, distrustful of the land’s magnetic pull, braced herself against an onslaught of delectable Fae sensory.

They were ushered into a gossamer tent lined with flowers that reached and wound around one another in dazzling displays of color. On a bed of petals lounged a female Fae with hair like shimmering cinnamon, eyes as vividly yellow as dandelions. Cecelia recognized the Fae woman as Martineth, the Alpha consort who ran the southern regions of Faerie for the Summer King. At her feet, a handsome human man with lost, fanatic eyes lavished her skin with gentle kisses.

The Masons were careful not to show their terror at the sight of Martineth. A light sheen of sweat across their brows and dampened palms could not be helped. They stood very still while Martineth’s yellow eyes traveled over them like guinea pigs in a pet shop—possible sources of entertainment. Cecelia, full of new mother ferocity, crossed her arms over her chest to cuddle Robyn closer.

“Leave me.” Martineth’s voice was lackadaisical as she waved off the human at her feet. He made a pathetic sound and kissed her ankle. She attempted to pull her legs free and swatted at him like a moth, but he mumbled and clung to her, desperate. “Take him,” she ordered the guard.

The Fae guard lifted the man with a yank and left them alone. Leon kept a straight face and averted his eyes from the King’s consort as he delivered his report of their region in the U.S. over the past year, reciting the numbers of eleven Fae who entered illegally into the earthly realm and the twenty-three human memories that were altered by Leon as a result. The report went better than hoped, faster. To Cecelia’s relief, their business must have bored Martineth; she gave a wide yawn and moved to dismiss them.

In that moment, a tiny mew rose from the carrier buried under Cecelia’s jacket.

Cecelia turned to leave. Again, baby Robyn made a noise. This time as a whimper that built into a mild cry.

Leon cleared his throat as his wife was set to exit. “Good day, my Lady,” he told Martineth, whose head had cocked to the side with curiosity.

“Stop.” Her voice carried to them like a bell.

The couple turned their heads, all innocence and nerves.

Martineth’s voice was a slow drawl. “What was that sound?”

Robyn took that inopportune moment to vocalize again and her parents shared a defeated, horrified glance. Martineth’s eyes were wide as she stared at the wiggling mass against Cecelia’s chest.

“What have you brought into our land?”

“It’s only our child,” Cecelia explained in an offhand tone. “Probably needs to be changed. Nasty business. We won’t keep you, my Lady.”

They turned again, only to be stopped once more by the snap of her clear voice.

“I have never seen a newly born human. Show me.”

The Faerie was sitting up now, stray petals floating down from layers of gown. Her inquisitive stare and eager tone made Cecelia tremble on the inside. With slow movements, Cecelia opened her jacket and unclasped the carrier from her shoulder. All grace, the King’s consort stood and glided forward. Robyn, only weeks old, squinted and quieted as the pleasant light washed over her. Cecelia had a sudden fervent wish that Robyn was bald and funny-looking like so many precious babies she’d seen. Instead, the consort admired an inch-plus of wavy chestnut hair, rounded pink cheeks and the sweetest puckered mouth. Chocolate eyes and black lashes blinked at the Faerie. Beauty.

Martineth’s bright eyes filled with wonder. “So small,” she marveled. “Her skin appears as soft as down.”

Cecelia inched backward, an animalistic intuition of warning rising up in her. As the Faerie woman raised a perfect, slender hand to the baby’s cheek, Cecelia yanked the child away and all but shouted, “No—don’t touch her!”

The temperature around them rose as the Faerie’s eyes shone like fire. Her hand froze in mid-air.

“My Lady,” Leon broke in. “Our human physician told us not to let anyone handle her while she’s so young. Infants are too fragile. Please forgive my wife. Her body and mind are still transitioning from the birth.”

His demeanor was calm, but his wife recognized thinly veiled panic behind his eyes. She fought for composure when all she wanted to do was run.

“I’m very sorry, my Lady.” Cecelia pushed out the apology. “I know the touch of a Fae alters a human’s mind. We don’t know how it would affect a newborn. I would hate for her to lose the ability to be of service to the Summer King someday.”

Martineth studied Cecelia, eyes a swirl of sunshine and heat.

“I assume you have reported the birth of this child?” the Faerie challenged.

To fail reporting a
Dightheach
child would mean death to its parents. Everyone with magical blood was expected to serve.

After another long stare at Cecelia and more greedy gazing at the child, the consort tapped her sharp chin. An ominous expression crossed her face, as if an idea were hatching.

“I can see why you are attached to the child.” The consort leered at the couple and walked a slow circle around them, glimmering hair falling in waves down her back. “She is a thing of beauty.” Martineth stopped in front of Cecelia and peered down at the baby. “Beautiful things have a way of disappearing in the night.”

The threat bolted through Cecelia with swift understanding. Her knees threatened to buckle as Leon spoke with hardened care.

“What is it that you wish from us, my Lady?”The consort chuckled. “I have a future mate for her—a binding which will greatly please the King.”

As a proud, wicked grin enhanced the Faerie’s fiery eyes, a burden of dread settled onto Cecelia’s shoulders for her daughter’s future. A future which was now as good as sealed.

Air Ryder (Harper's Mountains Book 3) by T. S. Joyce
A Death In The Family by James Agee
The Collected Stories of Colette by Colette
Elizabeth's Spymaster by Robert Hutchinson
The Simbul's Gift by Lynn Abbey
Seasons of War by Abraham, Daniel
The Year I Went Pear-Shaped by Tamara Pitelen
Frances and Bernard by Carlene Bauer
The Midwife Trilogy by Jennifer Worth
The Witch's Dream - A Love Letter to Paranormal Romance (Black Swan 2) by Victoria Danann