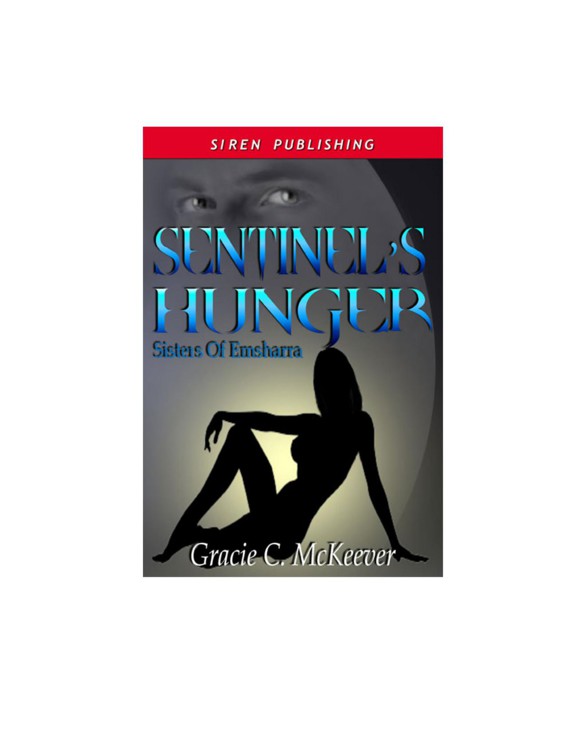 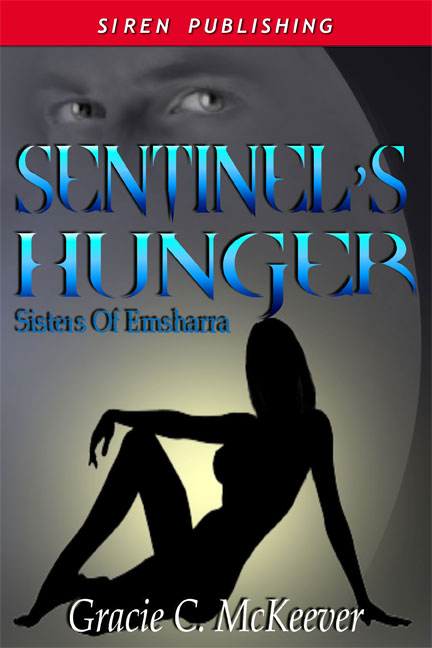 ABOUT THE E-BOOK VERSION:
Your non-refundable purchase of this e-book allows you to
one
LEGAL
copy for your own personal use. It is
ILLEGAL
to send your copy to someone who did not pay for it.

Distribution of this e-book, in whole or in part, online, offline, in print or in any way or any other method currently known or yet to be invented, is forbidden without the prior written permission of both the publisher and the copyright owner of this book.

All cover art and logo copyright © 2008 by Siren Publishing, Inc.

To all the worlds and universes yet to be created and explored, and in the name of all the curious writers who explore these worlds and the parents who fostered their imaginations, I dedicate this story.

Michael Constantine had just taken his second bite of a chilidog with the works from one of Manhattan’s ubiquitous sidewalk vendors when the call came in from the station: two unconscious individuals in an alley outside
The Tunnel Nightclub
, unknown origin.

He took another bite out of his dog, wrapped it up, put it down on the dashboard. He then turned on the siren and started the dispatch.

“But what about din—”

Michael made a sharp turn at the intersection and sped to the next light, efficiently cutting off any further protests. His partner of one week clutched the inside of the cab with one hand and his hotdog with the other.

This past week they had been on runs for anything from a runny nose to a lonely patient down the street who wanted ‘company,’ to a fourteen-year-old suffering from chest pains and hyperventilation secondary to the big ‘break-up’ with the ex.

They had had a pretty uneventful week as runs went, and Michael was bored and ready to break in his new EMT righteously. He hoped this call would do the trick.

He slowed his speed to weave through the light evening traffic, and pulled to a stop at the mouth of the alley outside the back of the nightclub.

Michael leaped out of the cab first and rushed to the back of the dispatch. Allan met him as he was pulling the stretcher down from the vehicle.

They wheeled the stretcher between them, rushing towards a woman on the ground.

Allan gaped as they neared several people milling around a big bald man sitting on the sidewalk. The woman in question lay a few feet away. “Do my eyes or the dark deceive me, or is that Naomi Campbell totally naked and unconscious up ahead?”

“I wouldn’t be surprised,” Michael said. He’d been an EMT since he was twenty-five, and after eight years, nothing much about the job surprised him anymore. He hadn’t seen it all, but he’d definitely seen a lot. Strung-out, abusive supermodels and coked-out, drunk rock and movie stars tearing up hotel rooms in fits of temper weren’t new to him.

Still, he stumbled to a stop once they got to the woman, trying not to gape like his young, inexperienced partner.

At a brief glance, the woman did look like the infamous supermodel, but even as Michael thought it, he didn’t believe Naomi Campbell had ever looked as good on her best day as the woman lying on the ground looked.

And what kind of sick fuck was he to notice?

But he couldn’t help it. The woman was stunning, raisin-brown skin smooth and shimmering beneath the dim light of the alley, endless well-muscled legs curving up to softly rounded hips before continuing up to concave waist and finally perfect plump breasts.

Michael’s cock stirred to life, and despite seeing a lot in his day
Sentinel’s Hunger

and not much surprising him, his reaction to the woman’s otherworldly beauty appalled him.

Suddenly, his chest tightened at the term his mother had used to describe the man who had raped her—Michael’s father.

He shook his head as if in denial, quickly knelt beside the woman, and peered up at the small group of bystanders. “Anyone here saw what happened?” When he received only blank stares, shuffling feet and a few scattered, “Not me” and “She was like that when I got here,” Michael turned to Allan. “Go check on the man. I’ll take care of her.”

Allan nodded, gave Michael a knowing smirk as he turned to go and said over his shoulder, “Some guys have all the luck.”

Michael pulled the blanket off the stretcher and covered the woman’s lower body, more for his own sake than out of deference to her modesty. He didn’t think he’d be able to concentrate long enough to examine her with the perfect V of her pussy staring up at him from the apex of those shapely thighs.

Michael took her vitals. She was breathing but didn’t respond, even to painful stimuli.

Allan jogged back to him. “The guy’s the bouncer for the club.

He’s okay, just raving about some alien cat woman who attacked him.

Says she and her two friends kidnapped one of the club’s patrons and took the victim through a glowing portal.”

“Uh-huh.” Since the Saint-Guillen killing, New York City had drafted legislation cracking down on hiring practices for club bouncers. If Michael didn’t know better, he might have thought the bouncer a perfect example of someone’s brains on drugs, but he did know better.

After what happened to his mother, Michael wasn’t convinced the ravings of the bouncer were those of a tripped-out lunatic, but he went along with Allan’s logic anyway and said, “Either that or
Stargate
.”

Michael glanced towards the entrance of the alley where another dispatch was pulling to a stop adjacent theirs. “Let them handle the bouncer. We’ll take care of her.” He had seen his share of ‘freaky aliens’ and lived to tell about it, but he wouldn’t. There was a time and place for everything and now wasn’t the time or place, despite the bouncer’s assertions.

“Oh, leave us the delirious hulk while you guys get the babe,” one of the EMTs from the new unit joked as they passed Allan and Michael with their stretcher.

“Early bird gets the worm,” Michael smirked as he and Allan quickly got the unconscious woman onto their cot and wheeled her to their ambulance where they began to work on her, all levity and jokes instantly forgotten.

Michael started an I.V. and got her hooked up to a heart monitor, but the woman’s vitals still didn’t improve. She seemed to be suffering from a severe state of fluid depletion, either blood or water.

It could have been caused by various reasons, even without actual fluid loss, but Michael was still mystified by the lack of bleeding.

“How’s she doing back there?” Allan asked.

They were about ten minutes from the nearest hospital when he started pouring I.V. fluids into the woman at a rapid rate and tried to warm her up. Finally, after about two liters of saline, the woman began to show signs of life and moaned right before her eyes flew open.

Michael gawked, mesmerized by their slanted shape and their shade, a bright jade color gleaming out of her dark brown face like a beacon.

Suddenly, she shot out her hand, wrapped her fingers around his throat and squeezed. “You must take me home. I must get to…Emsharra,” she rasped.

“What was that she said about home?” Allan asked before glancing over his shoulder to see Michael wrestling with their patient.

“Holy crap! Hold on!” He swerved to a stop in front of the hospital emergency entrance just as the woman went into seizures.

“Oh fuck…” Michael opened the back door and got the stretcher onto the pavement as quickly and gently as he could while Allan and two emergency room doctors met him.

“What’s the story, gents?” one asked.

“Signs of hypovolemic shock but no visible injury or blood loss.

Patient was showing signs of awareness before she went into seizures just as we were pulling up.” Michael didn’t mention that she’d been in the process of choking the living shit out of him right before seizing.

He decided they didn’t need to know.

He, Allan, and the doctors all rushed through the pneumatic doors and wheeled the woman to a treatment room.

“We’ve got it from here, boys,” said one of the doctors.

Michael stood by for several seconds filling them in on anything else they needed to know and was on his way out of the room to reception where Allan was waiting for him when the woman flatlined.

Michael turned when he heard Allan’s voice behind him. “I didn’t think so either.” But then, what did he know about her kind except that they drained and killed his kind at will?

He didn’t know whether to celebrate her apparent demise or mourn, too confused by his intense reaction to her essence to do anything except stare at her.

“No glory or modesty in emergency medicine. Isn’t that what you told me?”

Michael nodded as he followed Allan back to the reception desk.

He’d said it, but he hadn’t known he’d get attached to a patient the way he had gotten attached to the woman slipping away in the treatment room behind him.

“Ready to check out?” Allan asked.

Michael closed his eyes and reached out to her with his mind, surprised when he made an instant connection. He was so used to holding back, unwilling to invade a patient’s privacy unless absolutely necessary, that he hadn’t even considered using his ability before just now.

But now seemed like the best time, the most important time to tell her
not
to check out.

At least he would have sent this message had he not been assaulted with the most intense pain he had ever experienced since being shot in The Gulf.

Michael gasped and clutched his middle with a hand.