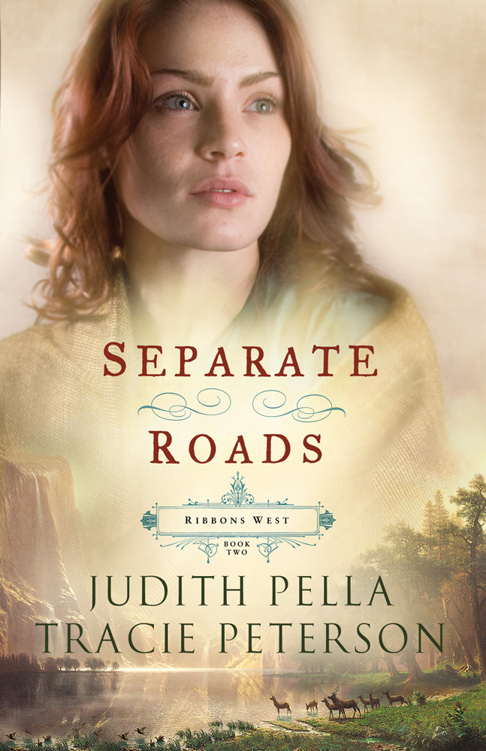 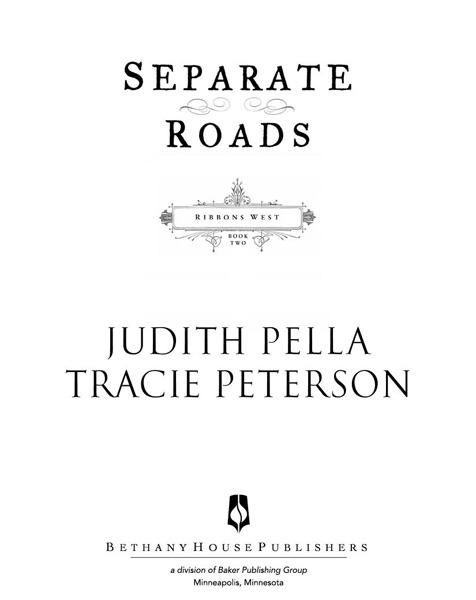 © 1999 by Judith Pella and Tracie Peterson

To Rich and Dianne

with love and thanks

for all you’ve done. 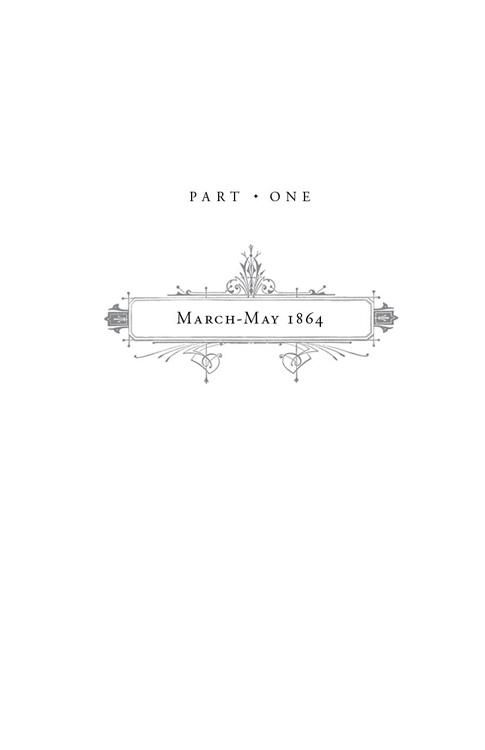 Jordana Baldwin stared at the clock on the wall for the tenth time in as many minutes. Why did Brenton have to choose today of all days to be busy? Normally he would have picked her up from her job at the Omaha Citizen’s Bank by four-thirty, but today he had business to attend to and had solicited her employer’s help in seeing her home. Unfortunately, her employer was in a meeting himself and was running unusually late.

She tried not to be too upset with her older brother. After all, ever since their arrival in Omaha, Brenton had felt rather displaced. His love of photography and desire to make a career of it was only just now receiving some satisfactory attention—even if his hopes of photographing the Union Pacific Railroad’s development had hit a snag. The UP, as folks usually called the eastern extension of the infant transcontinental railroad, was sitting rather idle at the moment.

She sighed and finished checking the final count on her ledger. She had long since completed her regular duties, and while waiting for Mr. Chittenden to conclude his business, she had decided to work ahead on one of her less important projects. But even that was done.

Now what was she going to do to occupy her time? She supposed she could sweep the floor of the lobby. Chittenden had a regular man who came in to polish the wood and clean up the place, but sweeping would at least give her something to do. Stretching, she glanced outside and noticed how quickly the light was fading. Why was the meeting taking so long? Impatient, she began putting her things away and tried not to be frustrated with Mr. Chittenden.

Hezekiah Chittenden was a fair-minded employer, who had taken an uneasy risk in hiring her on as the bank’s only female employee. He had been instantly impressed with her uncanny ability to work ledgers and numbers, but was equally unimpressed with the fact that she was a woman. Jordana had managed to convince him to give her a try, and now, after nearly four months of employment, even Mr. Chittenden had to admit to his good fortune in hiring her on.

“Miss Baldwin, I was a-hopin’ you’d still be here.”

Jordana looked up to see one of the five Wilson brothers standing at her teller’s window. His appearance startled her. She’d been so lost in thought that she’d not even heard the front door open.

“The bank’s already closed, Mr. Wilson,” she stated rather curtly. The Wilsons, along with half the male population of Omaha, made it to her window on a regular basis. They came so often—“Drawn in by her feminine charms and quick wit,” Mr. Chittenden had declared—that the banker had posted a sign stating that only customers were welcome inside the hallowed doors of his establishment. New accounts had tripled that day alone, and Jordana couldn’t count the number of men, mostly older, who came by simply to “check” on their money.

“I knew the bank would be closed,” the man admitted, taking off his dirty felt hat. “But I saw you through the window, and seein’s how you’re still here and the door’s unlocked, I kind of figured on doin’ my bankin’ business.”

She could smell the whiskey on his breath. He wasn’t really drunk, just comfortably at ease with himself. “Come back tomorrow,” she told him firmly. “The money is already counted for the night.”

He looked at her for a moment, disappointment clearly registering on his face. Then just as quickly he perked up. “Say, you wouldn’t be wantin’ to go with me to the dance next Saturday?” He smiled in a goofy sort of lopsided way, then puffed out his chest and tried to look confident.

“No, thank you, sir,” Jordana replied. “I . . . uh . . . shall be otherwise engaged.” She hated having to deal with the seemingly endless number of would-be suitors. Apparently just having her in a public position gave every eligible bachelor in the neighborhood license to try his luck with her. She looked at the clock again. Five-fifteen. Mr. Chittenden must truly have an advantageous prospect on the table or he’d have never let banking hours extend past four-thirty.

“I must ask you to leave, Mr. Wilson. I need to lock up and finish putting things in order.” She moved out from behind the teller’s window, something Mr. Chittenden had told her never to do with customers in the building. “If you come back in the morning, we can take care of your transaction.”

She took him by the arm and pulled him toward the door. “Good day, Mr. Wilson. Thank you for stopping by.” She opened the front door and stood waiting.

The dust-laden man was instantly deflated. He scratched his head for a moment, then replaced the felt hat and tipped it at her as he passed by. “Guess I’ll see you in the mornin’.”

She sighed as he left and quickly locked up. Pulling down the shade, Jordana’s gaze fell on the calendar beside the door. March seventh. It was her birthday. Her eighteenth birthday to be exact, and no one had even remembered.

“I have no one to blame but myself,” she chided and went quickly to work sweeping the lobby floor. She hadn’t reminded anyone that it was her birthday, although Brenton knew full well what day it was. At least she thought he remembered. Surely her own brother would remember. Still, she could hardly expect him to miss an important business meeting just because it was her birthday.

She unlocked the front door only long enough to sweep the dirt into the street, then closed the door once again. She had just put the broom away when Damon Chittenden, Hezekiah’s youngest son, bounded into the lobby from his office down the hall.

“I thought you were gone for the day,” Jordana stated, feeling just a bit uneasy. Damon had pursued her with more ardent interest than any of the others, and this coupled with the fact that they worked so closely together kept Jordana from finding a way to put distance between them.

At twenty-one, Damon seemed to consider himself the most sought-after man in the Nebraska Territory. Whether by women for love or by men bent on business, he made no distinction and found either to be to his benefit. His blue eyes took in every detail, watching his companions as if they were adversaries in a battle.

He smiled broadly, the wide stretch of his mouth seeming to balance his slightly oversized nose. “I was, but unfortunately—or because you’re here, I should say
fortunately
—I promised my father I would attend to some business in Council Bluffs. I forgot the ledger I was to take, however, and had to make my stop here before catching the ferry. I slipped in the back door.”

Jordana nodded and turned to go back to her desk. Damon reached out and took hold of her, mindless that his act was a breach of propriety. He was always touching her, and Jordana had tried more than once to put a stop to his familiarity. Now, as at most times, she halted in her tracks and stared at his unwelcomed hand until he released her.

“I wish you’d come to dinner with me. I don’t bite, you know. You tell me I mustn’t touch you, as we are not well acquainted, yet you won’t allow me to get to know you.” His expression softened as he continued. “You are such a handsome woman, Miss Baldwin. I only seek to pay you the proper respect and attention you deserve.”

Jordana found her aggravation slipping away. It wasn’t that she was overly flattered by his pretty words, but he was always kind to her and very gentlemanly for the most part. Still, his constant attention was becoming quite annoying. He thought nothing of bringing her sweets or flowers. He wrote her line after line of sugary poetry, with nearly every poem ending in “and this is the woman I adore.” He even suggested that he would gladly pay Brenton to provide him with a photograph of Jordana so that he might have her lovely face gracing his room at home.

Because I Love You by Jeannie Moon
Spellbound by Dark, Emmie
Virginia Hamilton by Justice, Her Brothers: The Justice Cycle (Book One)
Motor City Wolf by Cindy Spencer Pape
The Revenge of Geography by Robert D. Kaplan
Ash to Steele by Stewart, Karen-Anne
Good Money by J. M. Green
Tangled Vines: An Australian Rural Romance by Nicole Flockton
Nothing But Fear by Knud Romer
Slow Ride by Erin McCarthy